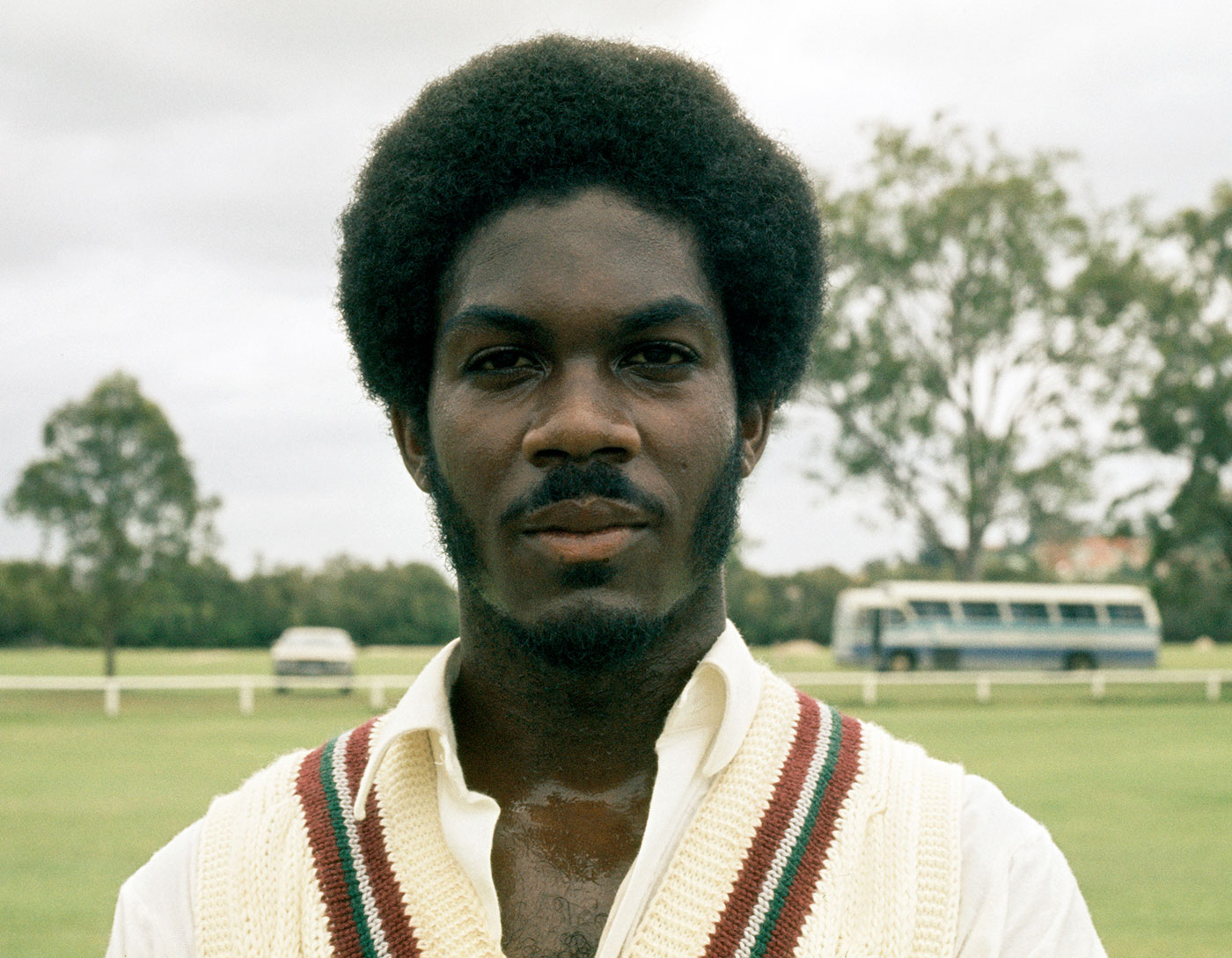 Magic Mike: Holding is an exception to the rule that less is more

Australian machismo, West Indian cool
West Indies' 1975-76 tour of Australia is considered a turning point: they lost the Test series 5-1, pummelled by Dennis Lillee and Jeff Thomson, but came out of it with the first stirrings of the idea that they too could dominate with pace. The tour was also a confrontation of two great collections of cricketing facial hair.

On one side were the bandito moustaches of Lillee, Rod Marsh, Max Walker and the Chappells, giving them the pantomime-villain air that Mitchell Johnson would summon up, decades later, to chill England to the bones.

On the other was a greater Caribbean variety of facial accoutrements, more organically acquired, less bound by the conventions of pop culture, and, let's just say it, far cooler. It's a hard job picking the coolest in that team. Clive Lloyd, who matched his thick, downward-curving moustache with spectacles? Gordon Greenidge, for combining moustache and soul patch? Deryck Murray, for the sheer shapeliness of his carefully tended beard? Or the careless and more carefree stylings of Andy Roberts and Viv Richards? Or even Michael Holding, for combining beard, sideburns and Afro? The non-ironic subcontinental 'tache
The cricketing moustache flourished in the 1970s and '80s, waned through the '90s, and vanished in the first decade of the 21st century, before reappearing in its second decade in an ironic, postmodern form. Through much of the '90s, the moustache was perched almost exclusively atop subcontinental upper lips.

It disappeared gradually from the faces of Indians and Pakistanis. Ramiz Raja, Ijaz Ahmed, Saleem Malik and Javed Miandad held on dearly, but either retired or lost their places. India's cricketers held on, but shed their 'taches: Javagal Srinath and Sourav Ganguly shaved theirs off, as did Anil Kumble, after a brief flirtation with a French beard.

The cricketing moustache with the briefest lifespan, however, belonged to another Indian great. You would think he went all 16 years of his international career clean-shaven if you hadn't paid attention to the Singer Cup of April 1996, played in Singapore. There, batting at No. 4 a 23-year-old, moustachioed batsman scored 3 and 4 in his first two international innings, against Sri Lanka and Pakistan. His name? Rahul Dravid. 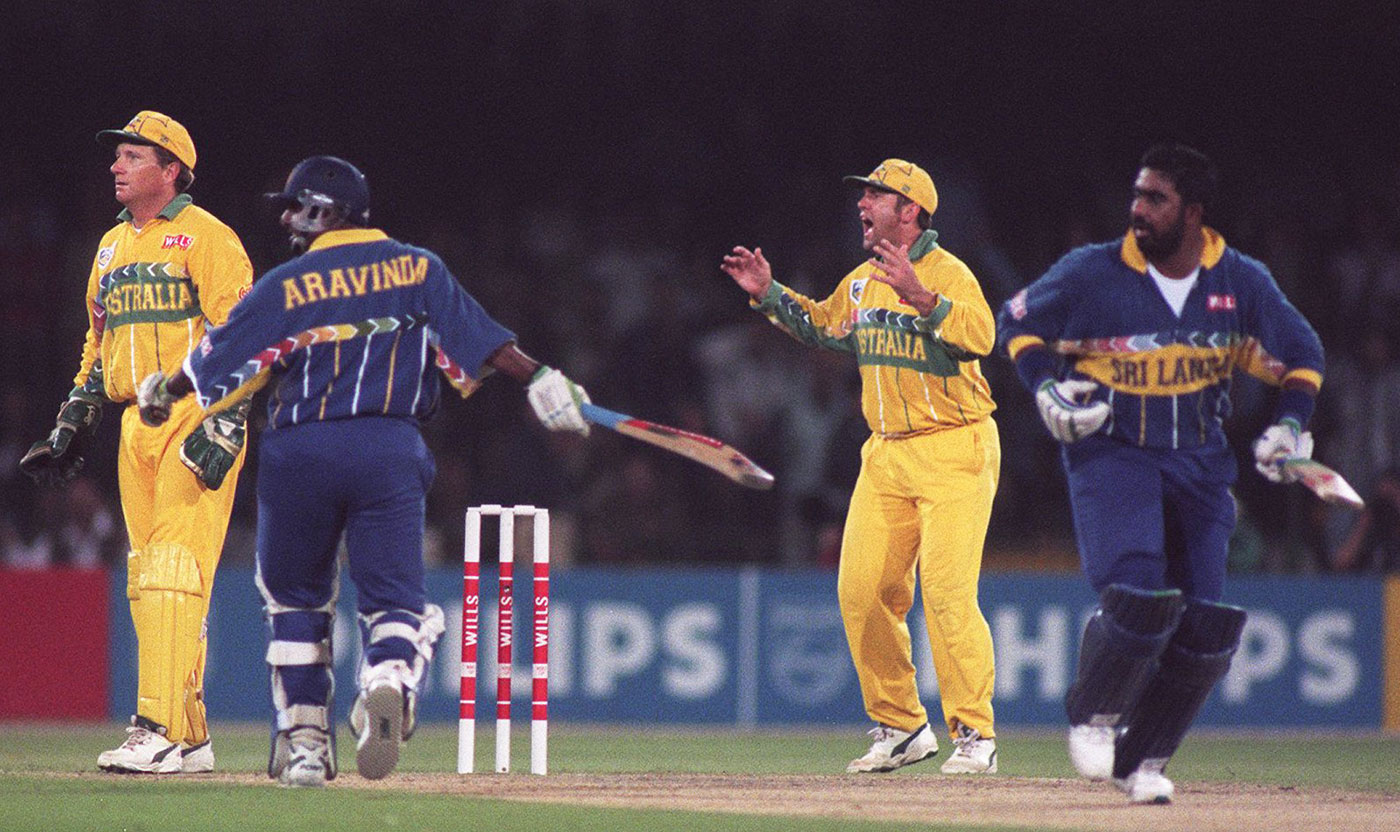 One beard is better than three
Aravinda de Silva, Arjuna Ranatunga and Shane Warne dominate the narratives of the 1996 World Cup final, but the defining contest within the bigger contest was the one between the beards. Australia's line-up contained three, all to be filed under the umbrella term of "French beard", though each was subtly different. Damien Fleming sported a Van Dyke, with a distinct separation between moustache and beard. There was no such gap in the beards of Stuart Law and Ricky Ponting, though the latter had a soul patch. All three beards spoke of the wearer's painstaking use of razor and trimmer. Nothing of the sort could be said about the only beard in Sri Lanka's XI, the grizzliest of the tournament, belonging to Asanka Gurusinha.

Australia batted first and scored 241, with Ponting and Law scoring 67 off 103 balls between them. Not bad, but like Australia's total, not good enough either. Not against that Sri Lankan side. Not against Gurusinha, who walked in at 12 for 1, which soon became 23 for 2, and scored 65, putting on 125 with de Silva and tilting the contest Sri Lanka's way.

Australia's bearded players seemed to shrink at the sight of Gurusinha's unabashedly hirsute and non-helmeted face while he batted against the spinners. On 25, he came down the track to Mark Waugh and lofted him in the direction of long-on, where Fleming slid in, got his hands under the ball, and let it slip through his fingers. Then, having reached his half-century, he pulled Michael Bevan straight to deep midwicket, where Law put down a sitter. The 1994-95 Pakistan team: no luxuriant beards but plenty of dad mo's © Getty Images

Chubby cheeks, fuzzy chin
Until recently, Azhar Ali was the sole remaining flag-bearer of a proud line of cherubic Pakistan batsmen that went all the way back to Hanif Mohammad. It included luminaries such as Hanif's brother Mushtaq - whose moustache couldn't entirely hide the chubbiness of his cheeks - as well as early-career Inzamam-ul-Haq, and lesser others, such as Wajahatullah Wasti and Faisal Iqbal. Like with Inzamam, the strap of Azhar's helmet served to accentuate rather than play down his ample cheeks. Then he went and grew a beard.

Baby-faced cricketers are increasingly sprouting facial hair, seemingly in an attempt to look their age. It works in some cases - Kane Williamson, for instance, has gained a certain scruffy charm by ditching the razor - but really, really does not in some others. Moustachioed BJ Watling and Quinton de Kock look like the result of a bored schoolchild vandalising a book of pictures of infants. Victorian wonderbeards
With their streamlined helmets, robotic stances and jerky triggers, some of England's batsmen look like cyborgs. Jonny Bairstow's ginger, Victorian-era beard brings an element of steampunk to their line-up, as if he stepped out of a time machine and found himself amid sports scientists, biomechanists and nutritionists at Loughborough.

Bairstow's face could easily blend into English and Australian team photographs from the late 19th century, the black and white nullifying the sheer red of his beard. Given how beards obscure differences between faces - a Virat Kohli lookalike in the crowd during India's recent Test series against New Zealand also looked like Ravindra Jadeja - it's interesting how some faces always stand out from the forests of 19th-century facial hair. There's WG Grace, of course, dominating with his physical presence and great, shaggy beard that Ernest Jones once penetrated with a tremendous bouncer. The eyes of Fred Spofforth, the "Demon", are somehow even more arresting than his magnificent handlebar moustache.

But the grand prize for facial furnishings must go to the Australian wicketkeeper Jack Blackham, who combined a wax-tipped moustache with an exquisitely sheared beard ending in a pointy tip that, according to Ray Robinson, hovered "just outside the line of off stump" when he stood up to the fastest bowlers of the day, bent at the waist, "rather like a man peeping through a keyhole". Tours to Asia used to afford us the sight of exotic foliage on Australian players' faces and heads. Not anymore