The hills are alive, sure, but what about the stands? The ones that pack in thousands of fans? Let's celebrate those. Getting to go to a cricket match in England in 1945 might have felt like a luxury. Here, at Bramall Lane in Sheffield, spectators sit in a bomb-damaged stand for the England v Australian Services match. These days there are all sorts of side attractions to a day at the cricket. In the recent Gabba Test between Australia and Pakistan, a shallow pool and a pool deck, along with seating on artificial grass, were installed for the pleasure of the spectators. The privilege of getting soaked was extended via invitation (by Cricket Australia) depending on how creatively you came dressed for water-side spectating. Sometimes, though, it can get a bit too cramped to enjoy your bento box at leisure. That's when you might miss the old bench seating, which has now been replaced by bucket seating. In this photo, footballer Ronnie Clayton stretches his legs and enjoys a game at Lord's. 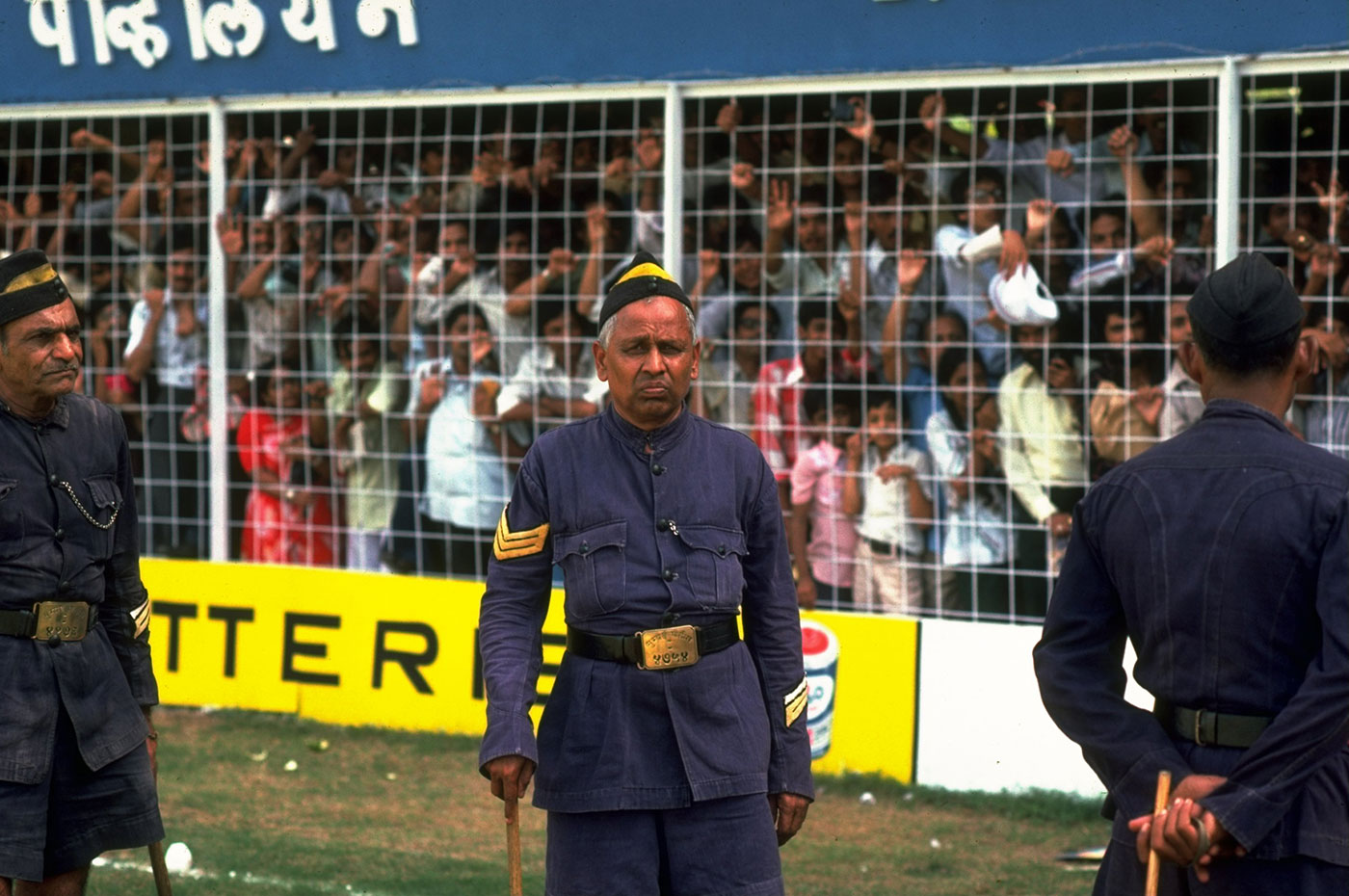 Most subcontinental grounds still subscribe to the idea that you need to be very, very uncomfortable to be able to focus on the nuances of a complex game like cricket. Above: in 1981, police guard a Wankhede Stadium stand made to resemble a day-time Mumbai suburban train. Sitting is for wimps, as fans in Multan in 2004 demonstrate. And while smoke emerging from a ground in Asia indicates the presence of a rioting mob, it's not so when it happens in Carisbrook, Dunedin, a university town that is used to the excesses of its student residents. Adam Gilchrist remembered the incident from a one-day game in 2000 in his book, True Colours:

"Dunedin is a university town, and the 'scarfies' - university students wearing their scarves - pack out the terraces. They'd bring lounge chairs, sit on them all day drinking and watching the cricket, then, at night, set them on fire. You'd think the world's wildest cricket crowds would be in India or the West Indies, but none of them was a patch on the madness and intimidation of those scarfies.

"… late in their innings, Brett Lee bowled a bumper to Adam Parore, who tried to evade it. He flicked back his head and his helmet fell onto the stumps: out, hit wicket. But the scarfies didn't like it, and started setting objects on fire and throwing them onto the field. They were feral. Just before that incident, a streaker had run onto the field, done a loop of the wicket, then run all the way back to his mates without being confronted by security, staff, players, or anyone. When he got back to his seat he sat down, still naked, picked up his beer again, and shouted, 'Get the game going!' It was anarchy." The ladies' stand in Lahore for the Pakistan-India Test in 1978. It looks like a fun stand to hang out in - lots of colour, laughter - and catcalling for Imran Khan, no doubt. The current Members Stand at the Sydney Cricket Ground was built in 1886. Dress codes in members' areas tend to be strict. At the SCG, apart from listing items of clothing that are unacceptable, the code also takes a dig at fashion trends like distressed jeans: "Ragged, tattered, unclean or torn clothing (regardless of how much it cost)." But as well-dressed as modern spectators might be in certain areas of cricket grounds, it's unlikely we'll see a stand of spectators as smartly dressed as this set from the early 20th century: WG Grace sits in the centre with a small boy at his feet. Young children clean the stands at Old Trafford during an Ashes Test in 1985.

When Denis Compton opened the Compton and Edrich Stands at Lord's in 1991, he is said to have wondered why there was no bar in either of the stands, considering he and his batting partner had enjoyed a drink or ten in their heyday (and after).

Which is the best ground to watch cricket in?

There are pretty grounds, historic grounds, grounds that ooze atmosphere, and those that make you feel like you're in the Colosseum. Five writers choose their favourites While another Test ground makes its debut, the salutary example of Bramall Lane, England's forgotten Test venue, should not be overlooked