How many New Zealanders do you pick in an all-star XI?

Scott Styris played 31 T20Is for New Zealand in the second half of the 2000s before going freelance in the domestic leagues - for Chennai Super Kings and Deccan Chargers in the IPL, in the BPL, and in England. His 188 ODIs fetched him close to 4500 runs and 137 wickets. Here he picks a white-ball XI from among those cricketers he played official matches alongside. "I also tried," he says, "to pick the best players, which means my balance is godawful, but oh well."

Starting at the top, it's an all Deccan Chargers IPL top three: Adam Gilchrist, Herschelle Gibbs and Rohit Sharma. We won the IPL in 2009 and these three were stars for us. I'm a big believer that the game is all about power these days, so that's the direction I've gone. Scoring runs quickly definitely wouldn't be an issue.

I want power and I want match-winners. Do they get any better than the Deccan Chargers trio? I know the ODI game has changed a fair bit ─ even since Gilchrist and Gibbs retired ─ due to the extra fielder that must be inside the circle between overs ten to 40. That has shaken up batting stats, so it's hard to compare eras. But I have no doubt that Gilchrist and Gibbs would be great, especially with the added advantage of another boundary option being open. And Rohit we know all about. My middle order is Ricky Ponting, Kane Williamson, who will captain, and Kumar Sangakkara. Ricky I thought was the best batsman I played against. He retired from Australia and came back to us at the Hobart Hurricanes in the Big Bash. He was brilliant with the group as well. Kane is a provincial and international team-mate and will end up miles in front, statistically speaking, of any other New Zealander when his international career is done. Kumar was a team-mate in my one season of the Sri Lankan Premier League. He was similar to Ricky in that he had such huge respect from his team-mates. He's obviously talented and highly skilled but also such an intelligent batsman too.

Next is MS Dhoni: simply the best finisher in the game. He was a team-mate at Chennai Super Kings and is another who had great command in the dressing room. The level of respect from the rest of the players was obvious. Those players are true leaders and greats.

Who would keep? Sangakkara spent a bit of time running round in the field, so I never considered him for keeper. So it was really out of Gilchrist and Dhoni. I think, realistically, MSD would also be the best of these three in the outfield, as he's a terrific natural athlete, but I've stuck to having Gilchrist as a batsman only, although I wouldn't have minded going with either one.

The bowlers are Daniel Vettori, Shane Bond, Morne Morkel and either Tim Southee or Trent Boult, who I can't split. Three or four Kiwis in this group, I know! I was provincial team-mates with Southee, Boult and Vettori, and I'm cheating a little here by bracketing Southee and Boult together. Both have been fantastic for New Zealand and, with plenty of cricket left in their careers, whoever finishes the strongest can claim the spot. 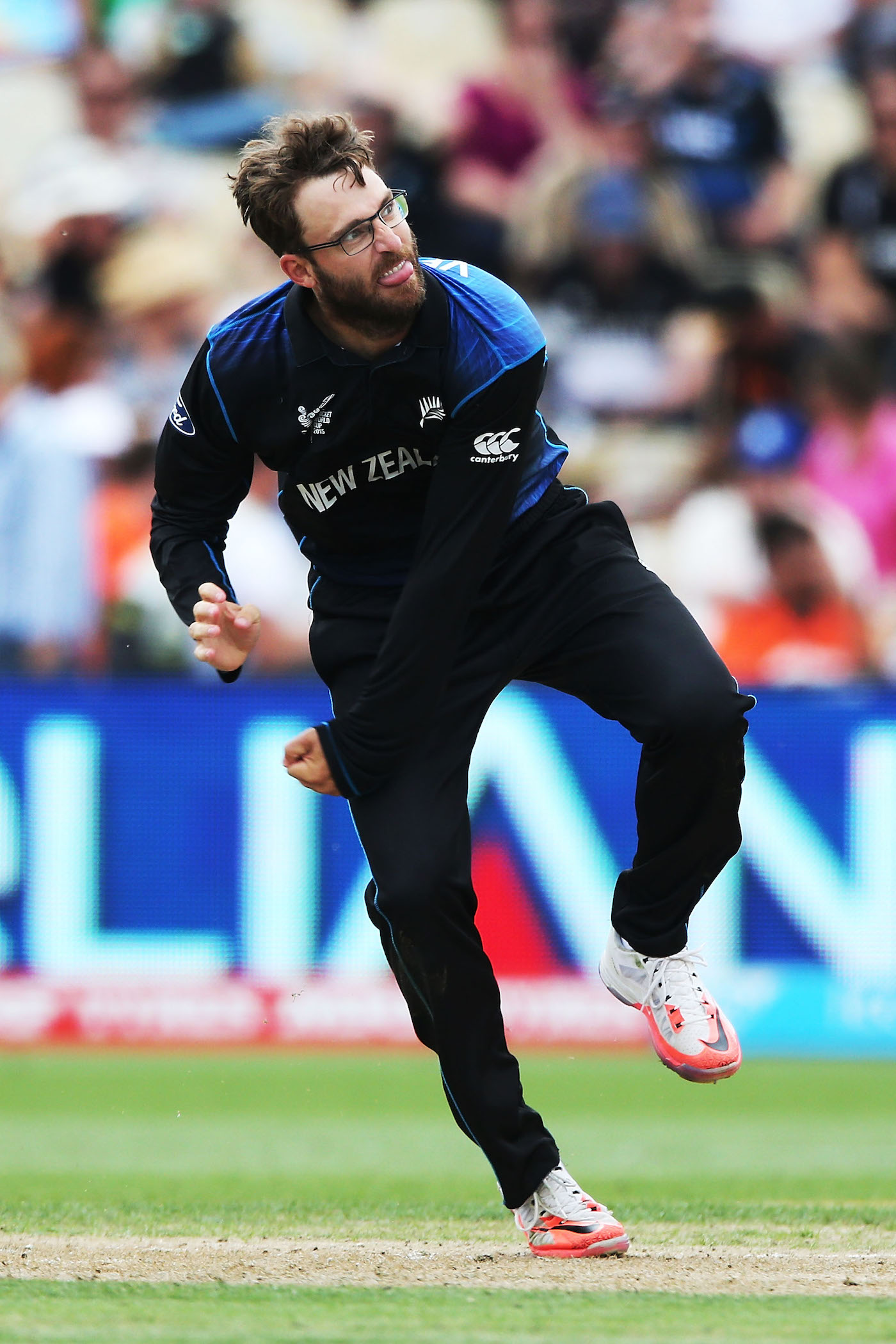 Face of deception: Vettori's mastery of drift and variation gets him a spot in the bowling lineup © Getty Images

I never played with Shane Warne, Murali, Anil Kumble or Saqlain [Mushtaq], and Vettori was probably the next best spinner: 360 Test wickets plus his batting show how good a cricketer he was. I played so much cricket with him that I've seen him perform time and time again. His strength is his deception: change of pace, same arm speed, and immaculate line and length. He had the ability to be an all-time world-class spinner during the "chucking" era, and didn't need to spin the ball both ways to do it.

I played with Morne Morkel at Titans in South Africa: 300-odd Test wickets says it all. You are an all-time great without question if you hit that number. With pace from a great height, he always made the opposition uncomfortable.

Who takes the new ball is a real headscratcher. I'm going to be an "NZ homer" and give it to Bond and Boult (sorry Tim, looks like Trent gets the nod). They both swung the ball and have dominated the best batting line-ups in the world. Morne has spent a lot of time bowling first-change for South Africa, so I have no problems with him fulfilling a similar role in my side. Neither Bond nor Morkel were specialist death bowlers either, so maybe those two can toss a coin as to who would join Boult to perform one of the most difficult roles in cricket.

The best ODI XI I played against

I only played against Wasim Akram, Waqar Younis and Allan Donald a few times, and I'm not sure they would get into this team. Interestingly, I played against Saqlain Mushtaq for New Zealand against Pakistan Under-19s, but not full internationals. If I had, he would be in front of Warne in white-ball cricket. I've also picked Sanath in this XI but left him out of my main XI…

And yes, I've only got four front-line bowlers, so Williamson, Ricky and Rohit will have to get through ten overs between them. I'm budgeting for these ten overs to go for 90, but the batting is so strong it won't really matter!

Lastly, there are a few near misses from my team. I had to leave out David Warner, Brendon McCullum, Alastair Cook and Andrew Strauss from the top order. Not a bad B team. In the middle order, I'd love to have been able to fit in Ross Taylor, Mike Hussey, Faf du Plessis and Stephen Fleming. As for the bowlers, Steve Harmison, Sohail Tanvir, Liam Plunkett, Kyle Mills and Danish Kaneria all came close to selection.