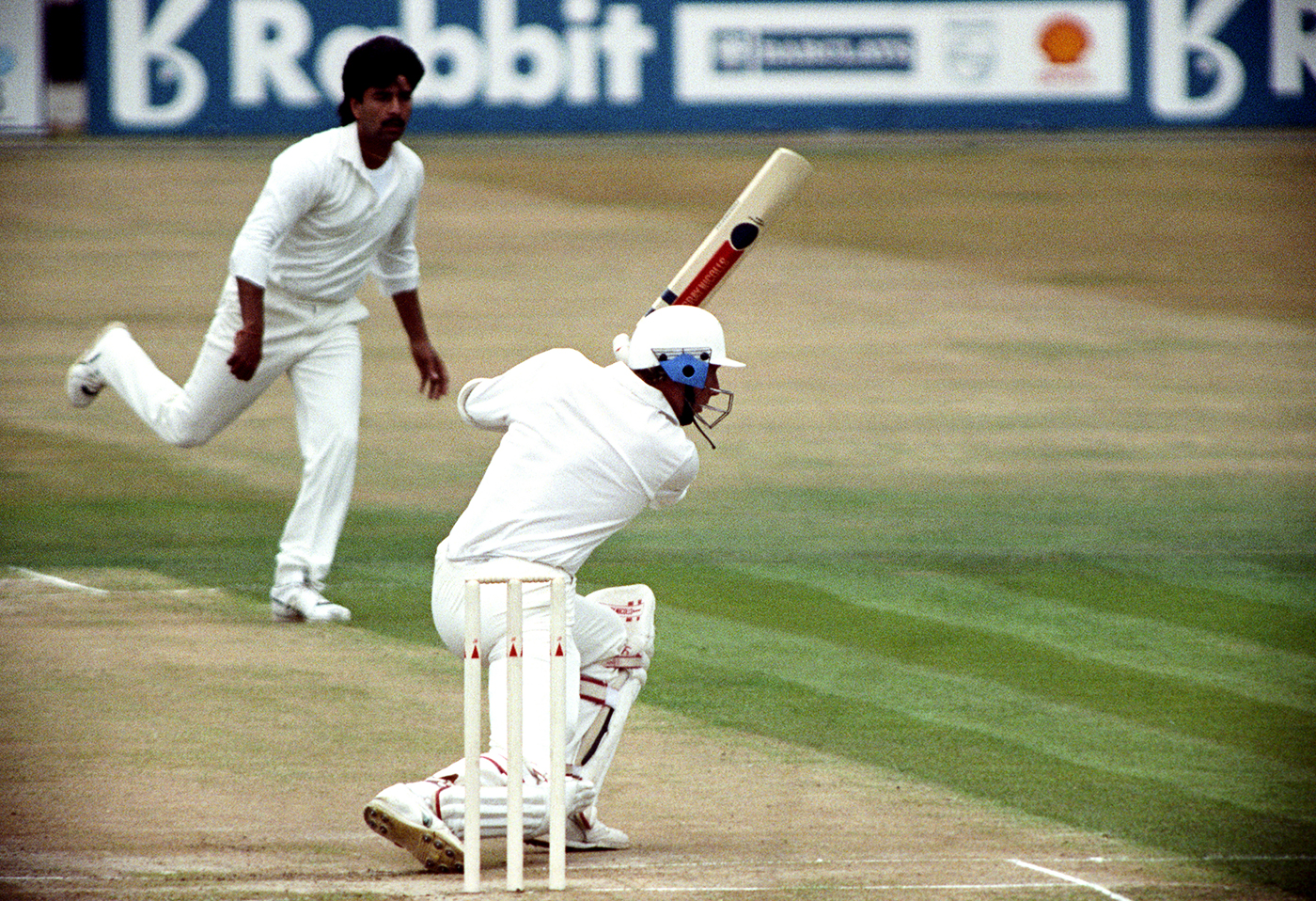 If the opposition is making you toil, who you gonna call? Manoj Prabhakar

The only way to use the words "Manoj", "Prabhakar" and "love" in a single sentence and prevent a mass detonation of "eeeww"s is to quickly follow them up with riders and explanations. Prabhakar himself will growl at the idea of being remotely associated with anything approaching lovey-dovey cuddle-invoking conduct. From the House of Manny-pa will emerge instead sounds of contempt. A chee could come first, or it could be a thoo!, accompanied by facial contortions or spitting noises or both. Put your soft toys where the sun never shines, **&^bc@%#mc&$**.

Prabhakar the cricketer was a man of sharp, hard edges. For those who don't know, remember or realise what he was about, let's just say that had he played in the era of ICC demerit points, he would have been insulted not to find himself atop the list of those with the most.

As an Indian cricket fan in the late 1980s, running into Prabhakar was like being asked to shake hands with a cactus.

Consider the scene. The World Cup glow had dulled, Javed Miandad's last-ball six had scarred our souls, Sunil Gavaskar had retired. Still in thrall of Kapil Dev, Mohammad Azharuddin and minor satellites, I was hoping for a return to the golden age of 1983-86.

When I entered journalism, stories of internecine warfare in the dressing room, and of Kapil's mission to find a successor who forever bowed to his greatness were a constant buzz. I couldn't bear to hear more. What we needed was a man of goodwill and calm, an emissary of the good times. Instead we got Prabhakar. The ambassador of bad attitude. A pompadour quiff over an Anil Kapoor moustache over a tropical-cyclone scowl. Wouldn't go away. Quietly or otherwise. Opening the bowling, opening the batting. Always annoyed. "Prickly" was the best descriptor, and many were tempted to drop a couple of letters from that adjective.

If Kapil was the Rolls Royce of Indian allrounders and Ravi Shastri a hatchback, Prabhakar was the Jonga, at home in the mud. A run-up that started brisk, developed second thoughts mid-trot, and suddenly quickened near the crease. Like the commuter who spots the state transport bus to Delhi edging out before time from the Ghaziabad terminal.

This Ghaziabad was Prabhakar's provenance. Outside the outside of Delhi, industrial, smoky, nondescript. What kind of cricketer could possibly come out of this machine-tool-making-pit? As Prabhakar was proud to prove: one hardwired and tough, with internal mechanics of the kind rarely seen. In hand, wrist and mind.

What we needed was a man of goodwill and calm, an emissary of the good times. Instead we got Prabhakar. The ambassador of bad attitude

Television of the time was unable to spot them but the arts contained in Manoj Prabhakar's bowling became urban legend. I'd heard he was the first Indian bowler who knew how to reverse-swing, like the fast-bowling Flash Gordons from across the border. (Sanjay Manjrekar was to confirm this factoid in his book, Imperfect.) The swing that was visible and talked about was feast enough. Of the variable, moving type. Nibbly, loopy, banana, in or out. Disguise, stealth, a creative mind conjuring destructive business. He bowled at an un-Prabhakaresque pace - unobtrusive, unthreatening, but with a hidden whiplash. After hitting Craig McDermott on the back of his helmet in the Boxing Day Test of the woeful 1991-1992 tour, we see on YouTube Prabhakar observing from a distance the fuss his team-mates were getting into over McDermott.

First of all, Indian medium-pace bowlers of that time didn't go about hitting tailenders on their heads. Not done. Not encouraged. (More like not able, also, I sulkily believed.) Then, they didn't stand around disinterested. Not done. Bad form. Pfft. (Discussions of Prabhakar always end up onomatopoeic - already I've gone through chee, thoo and pfft. The uff of exasperation will follow.)

As a rookie journalist, I tended to steer clear of Prabhakar, as he didn't appear to have a kindly manner towards anyone, not just novices. Didn't dare call him for a quote, as I thought he would mutter invective and slam down the phone. It was purely based on image. (Donkeys later, his low mellow tones and ready laughter as Delhi coach came as an actual shock.)

What I remember of him was how he got stuff done. Remember Sachin Tendulkar's first Test century, which saved a Test match in England? Who was the No. 8 at the other end? India's back-end guy. If a partnership needed to be broken, end to be held up, nervy batsman to be rattled, bowler to be blunted, skirmish to be set in motion? Every contest to Prabhakar appeared to be a score-settling. When the stars imploded, he was the fallback, a fail-safe; as safe, let's say, as a hand grenade with the pin halfway out.

I did have a theory about Prabhakar, though. That he was hard done by in a snake pit of a dressing room. When the venerable Rajeev Shukla was a journalist, he interviewed Prabhakar on a TV magazine show called Rubaru (Face to Face). 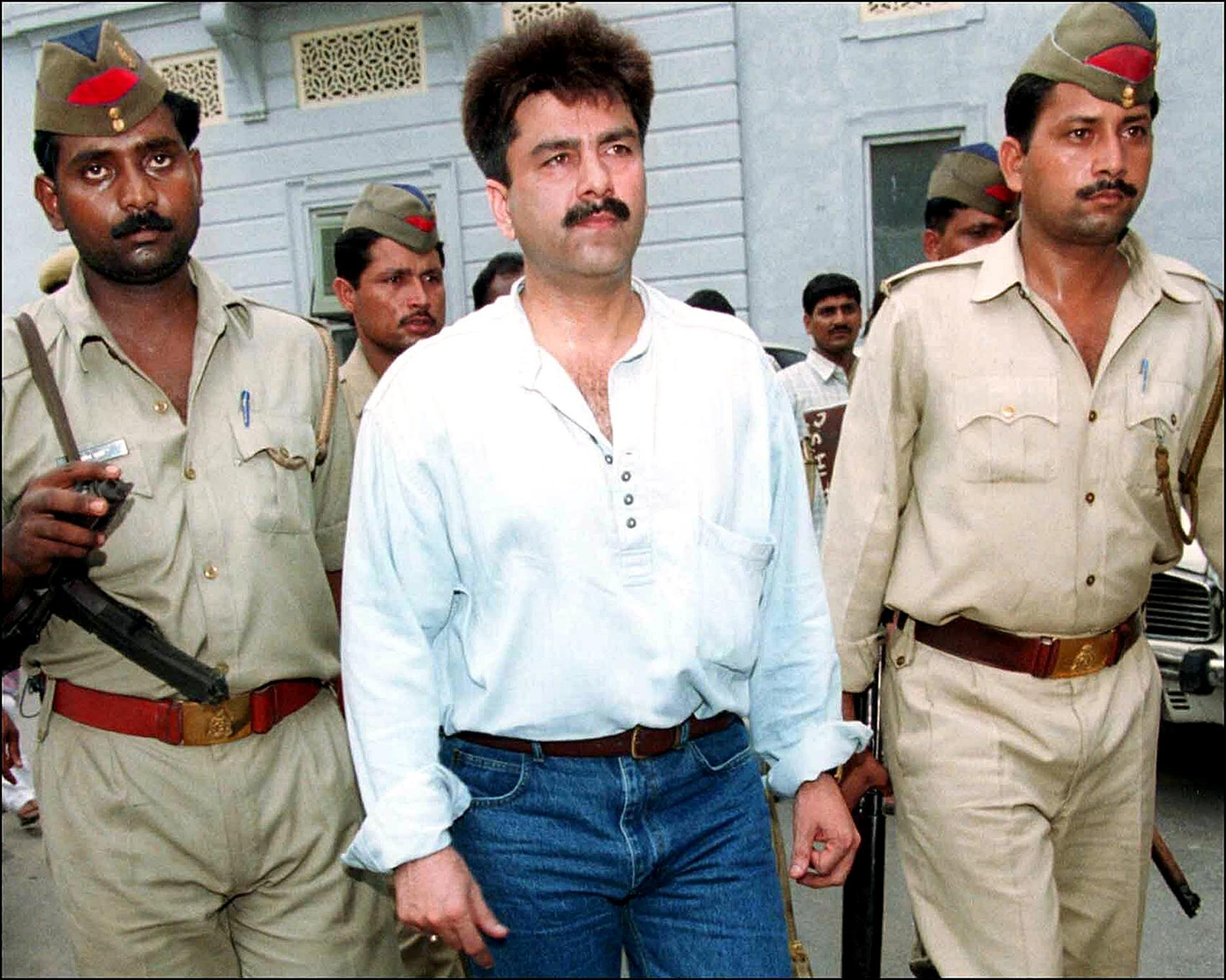 Prabhakar being taken to court for his involvement in a financial scam, New Delhi, 2001 © AFP

On it, we first heard Kapil talking about Prabhakar. "He's not a good athlete, you know. He's a poor athlete, and that is a very, very big point and that is a very negative point… You need… any sportsman should be a good athlete. Which I think is the only part Manoj is lacking…" To which Prabhakar responds: "Maybe he thinks that I don't run like he runs. Now if I try comparing, then the kind of swing I can get, he can't swing that much. This kind of thing happens. If he would have said this to me about 12 years ago, then even I could have become another Kapil Dev."

The country's greatest allrounder talking down a younger man who must have grown up admiring him. Both Kapil and Prabhakar came from outside the big metro up north; they were both in for the fight, and in sync they could have made a killer opening bowling combination for India. Chetan Sharma was seen as Kapil's favourite. When Sharma was injured on the England tour of 1986, Kapil sent for Madan Lal from the Lancashire leagues rather than pick Prabhakar. At the time it was only a theory that Prabhakar's anger simmered from the treatment meted out to him by Kapil or the selectors. Decades later Manjrekar would confirm: "Players like Prabhakar were not respected by the captain and the seniors; their value was never properly appreciated. To some extent that contributed to their being frustrated and becoming bitter and negative about Indian cricket."

Prabhakar's headlong love for the scrap was exemplified by his batting. Opening for India in 23 of his 39 Tests, he averaged more than his overall figures: 35.48 to 32.65, and 57.12 with five fifties in seven overseas Tests. In a 2010 interview, he described opening the batting after bowling. "When you pad up to face the first ball, your legs shake. I wanted to prove a few people wrong, so I took it up as a challenge." Such a team man, so willing to sacrifice, but such an overall badass, such a man-management nightmare.

At every point of his career, I wondered what Prabhakar could have achieved with better captains, someone like India got in Sourav Ganguly. The Sanath-Kalu demolition derby in Delhi in the 1996 World Cup caned Prabhakar into retirement, bowling offspinners in his final overs, booed by the crowd as he walked off the Kotla. By itself his cricketing career had a story arc fit for a mini-series. But that's not enough. Of course there had to be an operatic burst.

As a rookie journalist, I tended to steer clear of Prabhakar, as he didn't appear to have a kindly manner towards anyone. Didn't dare call him for a quote, as I thought he would mutter invective and slam down the phone

Only an agitator like Prabhakar could have given an interview in which he said that bookies had their fangs stuck into cricketers, as he did to Outlook in 1997. I felt an unsettling relief at the time, because we'd always heard something was badly twisted. In 2000, Tehelka's "Fallen Heroes" sting operation was evidence that everyone knew but was either feeding from it or avoiding talking about it. Then, the CBI report following the sting said that Prabhakar was, in fact, one of the beneficiaries of bookie largesse, for introducing cricketers to the dodgy underground. Uff. A cricket crusader with his own hand in the till. Banned along with his former captain Azharuddin, Ajay Jadeja and Ajay Sharma. Or was Prabhakar in real terms a whistle-blower who wanted to expose how the most worshipped players thought nothing of hoodwinking the public, and that it could only be proved with an insider's inside job?

There could be a psych evaluation question here: "Who is the real Manoj Prabhakar?" At this point, I don't care. It is the plot line of a life so implausibly bizarre, which gains more fantastical colour every year, that is compelling. Even during his ban, young bowlers sought him out to learn his craft. When his ban ended, teams sought him again, but those relationships didn't last.

Prabhakar has worked with Delhi, Rajasthan, Afghanistan, and was first sacked by Delhi two days before the start of his second season, in November 2011. The reason? For trashing players and selectors. In 2017, he was once again appointed "bowling mentor" for Delhi. Every six months a new drama kicks up. Last heard, an arrest warrant over a 15-year-old case involving a chit-fund fraud had led him into an Indore courtroom to pay bail and a fine.

Prabhakar remains impossible to warm to but tough to ignore. Had he played in the 21st century, he would have been a T20 star with a trending Twitter handle. Like his bowling, he remains a shape-shifter, victim and perpetrator in the same skin. Ugh, what a fellow.