'The worst England tour ever'

Thirty years ago England were battered, bruised, broken and blackwashed in the Caribbean Playing England in a World Cup certainly brings out the best in West Indies' players, as was demonstrated dramatically by Carlos Brathwaite recently in arguably the most dramatic end to a sports final since Manchester United's 1999 Champions League win over Bayern Munich. Further back, Collis King in the 1979 World Cup, and Courtney Browne and Ian Bradshaw in the 2004 Champions Trophy, rose to the occasion with match-defining efforts that led West Indies to victory.

However April 2016 marks another, somewhat forgotten, West Indies triumph over England. Thirty years ago David Gower's side was hammered in a 5-0 "blackwash" in the Caribbean.

During West Indies' dominance from 1976 to 1995, they clean-swept series only twice - against England in both instances - compared to the 14 times Australia's teams managed it between 1995 and 2007.

"This was the worst England tour ever. In '86, England didn't score a century - they did in all the other Ashes series and [in] India - and nobody averaged 40. They did win one of the ODIs, but that was a lone high note. In ten Test innings they were dismissed for 200 or fewer eight times, barely topping 300 the other times. Not that the bowlers were any better: West Indies lost just five second-innings wickets in the entire series." Going into the series, England were actually optimistic, having just won the Ashes 3-1 at home and 2-1 in India the previous winter.

"I don't think 'debacle' is the best word," Steen said about the West Indies tour. "There was no shame whatsoever in losing to such opponents - but 'slaughter' will do, symbolised by poor Gatt's Macca-ed nose."

Gower said it was a series he does his best not to revisit.

"Everything that could go wrong did go wrong, both on and off the field. West Indies were admittedly outstanding, but we let ourselves down badly. Those players, Gooch, in particular, with links to South African rebel tours, found themselves under pressure and thus found it hard to focus fully on the job. My great mate and ally, Ian Botham, was not at his best. Others lacked or lost confidence and, to be honest, so did I, in my captaincy. With a lot of disgruntled supporters and press in hot pursuit, there was indeed little to enjoy."

The first significant moment of the tour occurred in the first ODI, at Sabina Park, when Mike Gatting had his nose broken by Malcom Marshall. "Sheer horror!" said former West Indies offspinner Roger Harper, who played all four ODIs and two Tests of the series. "I was horrified for Mike Gatting.

"If I remember correctly, I was the one who picked up the ball and saw the bone stuck in it. Then I went to look at Gatting's face and saw a big hole in the bridge of his nose where the bone came from."

"When I realised that a piece of Mike Gatting's nose had lodged in the ball, I feared that he had sustained a more serious head injury than what was apparent," said Jeff Dujon, who kept wicket in four Tests of the series. "Joel Garner looked as if he was going to be physically ill as he removed it from the ball. Not in a joking manner, I remember turning to someone and asking, 'Shouldn't we give it back?'"

"I was going in next to bat, there was no television coverage, so I wasn't sure right away what was going on," said former England batsman Allan Lamb. "Ian Botham, who wasn't playing that game, alerted me from the sideline that a piece of his [Gatting's] bone was broken.

Gatting would later come back to play the final Test, in Antigua.

"Mike is a tough nut," said Gower. "No one would have blamed him if he had stayed at home having had his nose fixed. We were not shocked [that he returned]. We admired him and he showed a lot more spirit than some who had not had noses rearranged!"

Three days after the ODI, the teams met for the first Test, again at Sabina Park, where, at the time, West Indies had been unbeaten since 1958. Along with the Kensington Oval in Barbados, where the team did not lose a Test from 1948 to 1993, Sabina Park was a fortress where West Indies' fast men always enjoyed bowling. The West Indies squad for the third Test, in Barbados © Getty Images

"Patrick Patterson [was] bowling very quick in that Test, in fact, the fastest by some way of all the quickies," said Michael Holding, who took 16 wickets in four Tests of the series. "He was signalling his intentions of taking a spot in the line-up permanently as the original four-prong attack was slowly coming apart. Andy [Roberts] had already gone, Colin Croft disqualified himself by touring South Africa with the rebel cricketers, and Joel [Garner] and myself had, at most, two more years to go. Those days, Sabina and Kensington Oval were the two pitches the fast bowlers looked forward to bowling on, and he made a huge impression in that first Test of the series."

Veteran groundsman Charlie Joseph had the pitch prepared with its then-famous mirror-reflecting surface, and a young Patterson took seven wickets in one of the quickest and deadliest displays of fast bowling in Test history.

The Times' John Woodcock said he "never felt it more likely that I would see someone killed on the pitch".

"Patrick Patterson is unquestionably the fastest bowler I ever kept wicket to," said Dujon. "There were times later in his career when he didn't quite achieve his top pace, but his bowling at Sabina Park was, I think, the fastest he ever bowled. What stands out most was the degree to which he was able to get the ball to leave the bat at such pace. This was something I had never seen before - hooping outswingers at well near 100mph!"

Harper was fielding at slip as a substitute when Patterson was bowling. "We were so deep, so far back, that we could almost spit over the boundary behind us," he remembered. "I think that he terrified the daylights out of the Englishmen on that pitch."

Lamb, who scored six of his 14 Test hundreds against West Indies and was a very good player of fast bowling, struggled in that series. 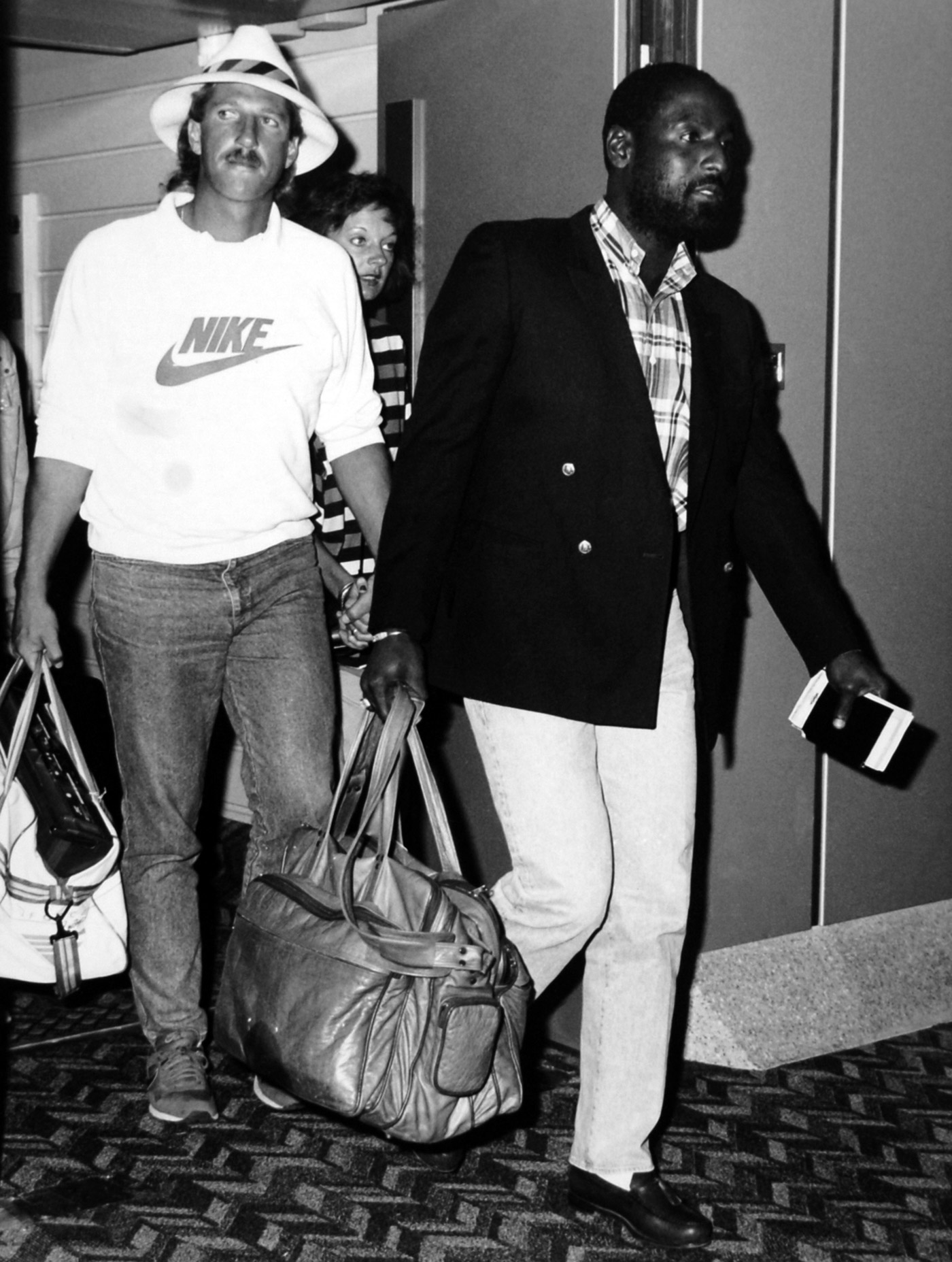 "Patterson was frightening that day," Lamb remembered. "You didn't know if one was going to hit, given the uneven pitch and low sightscreen. There was a ball Patterson bowled to me that jumped from a length, hit the shoulder of my bat and went for six."

The sightscreen was definitely a sticking issue for the English. Wisden noted that the Jamaica Cricket Association had been unable to grant England's request to have it raised. The request had been made after their problems facing Walsh and Holding in the Jamaica match. "To have raised the screen would have obscured the view of an estimated 200 spectators to whom tickets had been sold. All Patterson's wickets were taken from that end."

"Patterson's bowling was possibly the fastest I've seen a Windies bowler since Roy Gilchrist and Wes hall in their young days, although it was difficult to tell without speed guns. The George Headley [Stand] was built in late '70s, early '80s, and even though visibility was not the best, calls for seating to be evacuated was very funny to me because some of sightscreens when I played in Australia and England in the 1950s and 1960s were comparable."

By the end of the one-sided series, Viv Richards had rubbed the final salt into England's wounds by scoring the then-fastest Test hundred, in the fifth Test, in Antigua.

"It was an awesome display of hitting, which would not have been out of place in a T20 match," said Gower. He was in complete control. I just felt helpless, and the truth is that the Antigua Recreation was not big enough to contain him and his shots. Even the MCG might have been too small!"

Harper, who was batting with Richards at the time he broke the record, said West Indies' plan for the second innings was to get enough runs as quickly as possible and then put England in again. "Sir Viv absolutely tore into the English attack. No one was spared. He had no doubt that he was going to get a hundred. You could see it in his eyes."

Lamb recalled England's helplessness on the field. "Ian Botham sent me to the deep backward square boundary in a plan to bounce him out. I told him that wasn't going to work. It didn't as balls kept flying over my head." The greatest cricketer of his generation, and the moment of his fulfillment