The villain who wasn't

Can you piss off a whole country and yet remain a cracking bloke? Yes, if you are Trevor Chappell

Trevor Chappell came to New Zealand yesterday. No devilish horns protruding from his close-cropped grey hair. No horned tail curled up inside his smart slacks. Not a sign of a cloven hoof.
- Don Cameron, Cricinfo, December 2, 2001

For anyone who fell under cricket's spell in 1980s New Zealand, the Chappell brothers Greg and Trevor were a two-headed Australian monstrosity involved in the most dastardly act of cowardice and scumbaggery in our young nation's sporting history: the underarm delivery.

You know how it went: the Chappells conspiring to do the evil deed, umpires Peter Cronin and Donald Weser reluctantly agreeing it was within the laws, Rod Marsh saying "no mate" through his walrus 'tache, the immaculately straight delivery itself, burly Brian McKechnie hiffing his bat in disgust, centurion "Bootsie" Edgar unleashing the fingers, Geoff Howarth raging onto the MCG in his socks, and mild-mannered Richie Benaud delivering the greatest cold-blooded post-match analysis of all time.

Nobody came close to the Chappells in terms of their impact on our country's sporting psyche - together they demonstrated a mercilessness and ruthlessness that undermined the much admired New Zealand trait of giving someone a fair go. Inadvertently the two younger Chappell brothers probably did more for the game of cricket in New Zealand than anyone else. The aftermath of the underarm galvanised New Zealand inside and outside the game like nothing had ever done before, or has since.

TC, the man, in the flesh, was self-effacing, humble, honest and armed with a disarmingly brilliant sense of humour

I was conditioned to regard Trevor Chappell as an infamous villain after a quarter century of media baying and cultural reinforcement everywhere from the family dinner table to TV ads. This was our mindset as we headed along to a lunchtime event in 2006, for the 25th anniversary of the underarm, expecting to heckle him and wind him up. Surely people would boo him, we thought. This was going to be a bloody laugh.

But the reality was that TC, the man, in the flesh, was a cracking bloke - self-effacing, humble, honest and armed with a disarmingly brilliant sense of humour. He tolerated our requests for annoying photos graciously. We parked up with him and McKechnie after the official event had long since concluded, and talked about the game, and life, and trotting, and the universe, and everything. Trevor invited us to look him up when we were next across the ditch. I think he was coaching the 1st XI at The King's School in Parramatta in another chapter of a life devoted to cricket. (We never did go along to see him, and I regret it to this day.)

There was no booing. It's funny how a face-to-face meeting and a personal interaction can shift your perception in a titanic way. Of course it cuts both ways - sometimes a rendezvous might diminish a hero.

In his book Fierce Focus, Greg Chappell wrote of his fraternal relationships:

"I was going to be every bit the tyrant to Trevor that Ian had been to me. But TC was his own man. Trevor was quiet and unassuming, but if you pushed him too far, he'd explode. That's TC through and through: very passive most of the time, easy going, but push him too far and there's an explosion coming."

On that famous MCG day in 1981 there was no family explosion. Greg walked up to Trevor and asked how he was at bowling underarms. Trevor replied: "I don't know." And Greg said: "Well, you're just about to find out." Trevor's eyes rolled to the back of his head. Trevor Chappell (holding the "underarm" ball) with Bruce Edgar to his right and Brian McKechnie to his left and the Beige Brigade in 2006 (top); the legendary delivery, at the MCG in 1981 © Beige Brigade, Associated Press

It later emerged that Greg, the captain, was in the process of mentally imploding. "I wasn't fit," he told ABC in 2004. "I mean, I was mentally wrung out, I was physically wrung out, and I was fed up with the whole system… and it was a cry for help."

Not only did Greg's struggle tarnish his reputation, he brought his brother along for the ride. I wondered if the aftermath of the underarm saga was a millstone around Trevor's neck, as 35 years later we still bang on about it at least once a year. But in an email chat earlier this year, he said nothing that has gone on since the first of February 1981 has changed his attitude towards the game.

Trevor Chappell was probably a journeyman cricketer, but that sounds borderline disrespectful. He batted stoically rather than flamboyantly (79 Test match runs from 70 overs worth of deliveries), bowled niggly medium pace (which helped Australia win the second match of those 1981 WSC finals), and was a stonkingly good fielder in the covers. He played Sheffield Shield for South Australia, Western Australia and New South Wales. He scored 110 from 131 balls in Australia's annihilation of India in the 1983 World Cup, his only time past 27 in international cricket. And he played in the 1981 Ashes.

He reckons being selected for the Australian Test squad was his proudest moment, following in the footsteps of his two older brothers and his grandfather, Vic Richardson. "I'd never really expected to play Test cricket - three family members had already played, what were the chances of a fourth? Then I was involved in World Series Cricket, throw in the underarm and the odds were getting longer. So when it did happen, it was a great thrill."

I asked him what his greatest achievement outside cricket has been. In typical style he made a blunt, bald assessment. "There is not a lot non-cricketing that I have done really," he said. "I'm not married and don't have any kids, so that is a very short story. I was married, shortly after the underarm actually, in March 1981 and then divorced before the 1980s had finished."

The cricketer I hate to love is still neck-deep in the game he has loved since he was a kid playing in the backyard of Chappell HQ in Adelaide. He is a son of cricket who has dedicated most of his 63 years to it. He has coached at schools around Sydney and taken on a bevy of overseas assignments, including coaching the Singapore national team and working as a fielding coach with Sri Lanka. He reckons coaching the Bangladesh national side in the early noughties was his toughest cricket gig. Not in a mean-spirited or unpleasant way - he enjoyed working with the players, but found the language barrier tricky to navigate. Last season he was coaching premier cricket in the leafy streets of Sydney's Upper North Shore at the club where he started when he first moved to Sydney. And in a twist of fate, Bruce Edgar's son Corbin plays at the club too.

When I met Trevor he was coming from a long way back on the reputation front. It was a bottom of the long-drop situation for him, really. A quarter century of derision and angst around that fateful day back in 1981 had clouded my perception.

But the reality was much less angst-ridden: Trevor Chappell wasn't some sort of reprehensible cliché but a decent bloke who loved the game. He was just like us.

Paul Ford is co-founder of Beige Brigade, and co-owner of the underarm ball from the infamous game. It's on his mantelpiece in Karori 'People might not remember me if not for the underarm'

The youngest of the Chappell brothers talks about growing up in a cricketing household, how baseball and football helped his fielding, and coaching youngsters Why Greg Chappell instructed brother Trevor to bowl the infamous underarm delivery, and the subsequent fallout 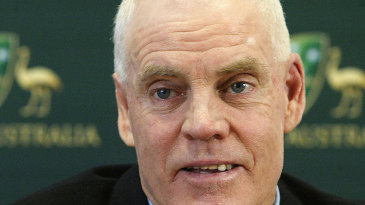 'I'm sick of hearing about it'

The quietest of the Chappells talks about growing up with Ian and Greg, his new coaching assignment, and of course, that underarm delivery