Offspinner Keith Slater also bowled pace, and dismissed Peter May three times in three innings. But despite his talents, he only played one Test for Australia 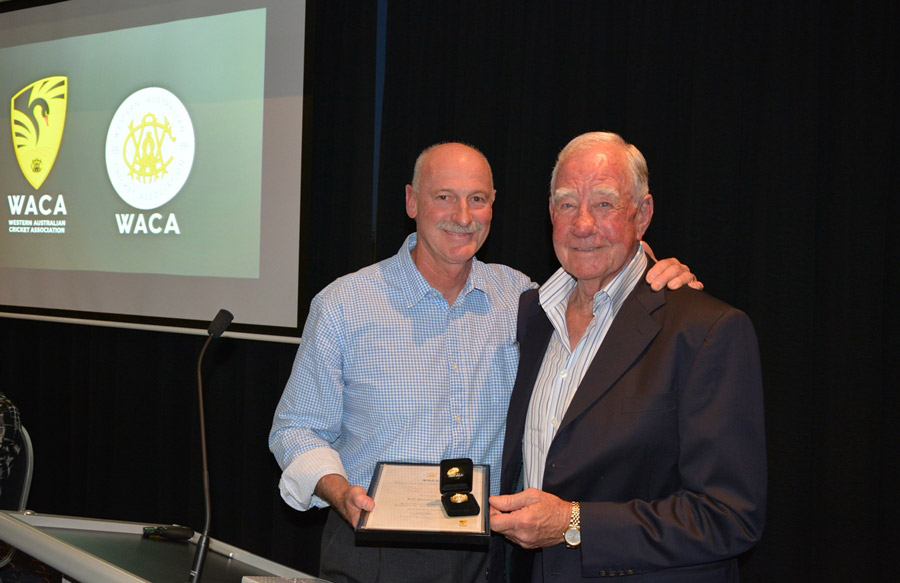 Keith Slater bowled quick off 19 yards with the new ball. He bowled medium-pacers off 12 yards with the older ball. He bowled offspinners off eight yards. His two Test wickets were batsmen of the highest calibre, Peter May and Ted Dexter. He batted at No. 10 for Australia, but by the end of his career was opening for Western Australia. He was quite the allrounder, but played only one Test.

And yet in the past 50 years, Slater has never had reason to stop and wonder why. He knows why he played only one Test. It disappoints him even now, but at least he knows. Chairman of selectors Don Bradman explained it all when Slater wasn't selected for the 1961 Ashes tour of England, and thus never added to the one Test cap he won against England at the SCG in January 1959.

"I wrote Sir Donald Bradman a fairly strong letter because I was pretty annoyed about not getting selected," Slater says. "I had 32 wickets for the season and all the journalists around Australia tipped me to be in the team to go to England. I wrote a letter to Sir Donald Bradman and I found him terrific.

"He wrote me back a long letter, three pages, handwritten by Sir Donald. He said that the International Cricket Council had asked every cricketing nation not to pick anyone in their side that had a doubtful action. They classified my action as doubtful. I didn't agree that I had a doubtful action, but I agreed with the theory. That solved the problem pretty quickly.

"I reckon on the quality of batsmen dismissed, I'm the best in the world - May and Dexter!"

"Not only did he write me a letter but the next season when I was in Adelaide, he invited me to his home for dinner. That was unbelievable. Graham McKenzie and I both went. He had a manual projector and he had all these bowlers on film. He played all these bowlers, including me, and my action didn't look too good, but neither did a lot of others at the time."

Slater had never been no-balled for throwing, but his cards were marked as far as international cricket was concerned. He would join his state team-mate John Rutherford as a one-Test player. In Bombay in 1956, Rutherford had become the first man to play Test cricket for Australia while a Western Australia player; three years later, Slater was the first chosen from WA for an Ashes Test, and for a Test in Australia.

By Slater's own recollection, his selection came out of the blue, although he had done his chances no harm by running through the England top order during a tour match in Perth. He shared the new ball with Des Hoare - who would two years later become yet another one-Test player - and cheaply dismissed Peter Richardson, Arthur Milton, Tom Graveney and Peter May, to finish with 4 for 33.

"There was a gale blowing," Slater says. "Our captain was Ken Meuleman, and he decided he didn't want to bowl Ron Gaunt or Des Hoare into this gale. So he said, 'I want some big, strong bastard to bowl into the breeze, just to bowl line and length while the quicks let loose from the other end.' So I was the man. 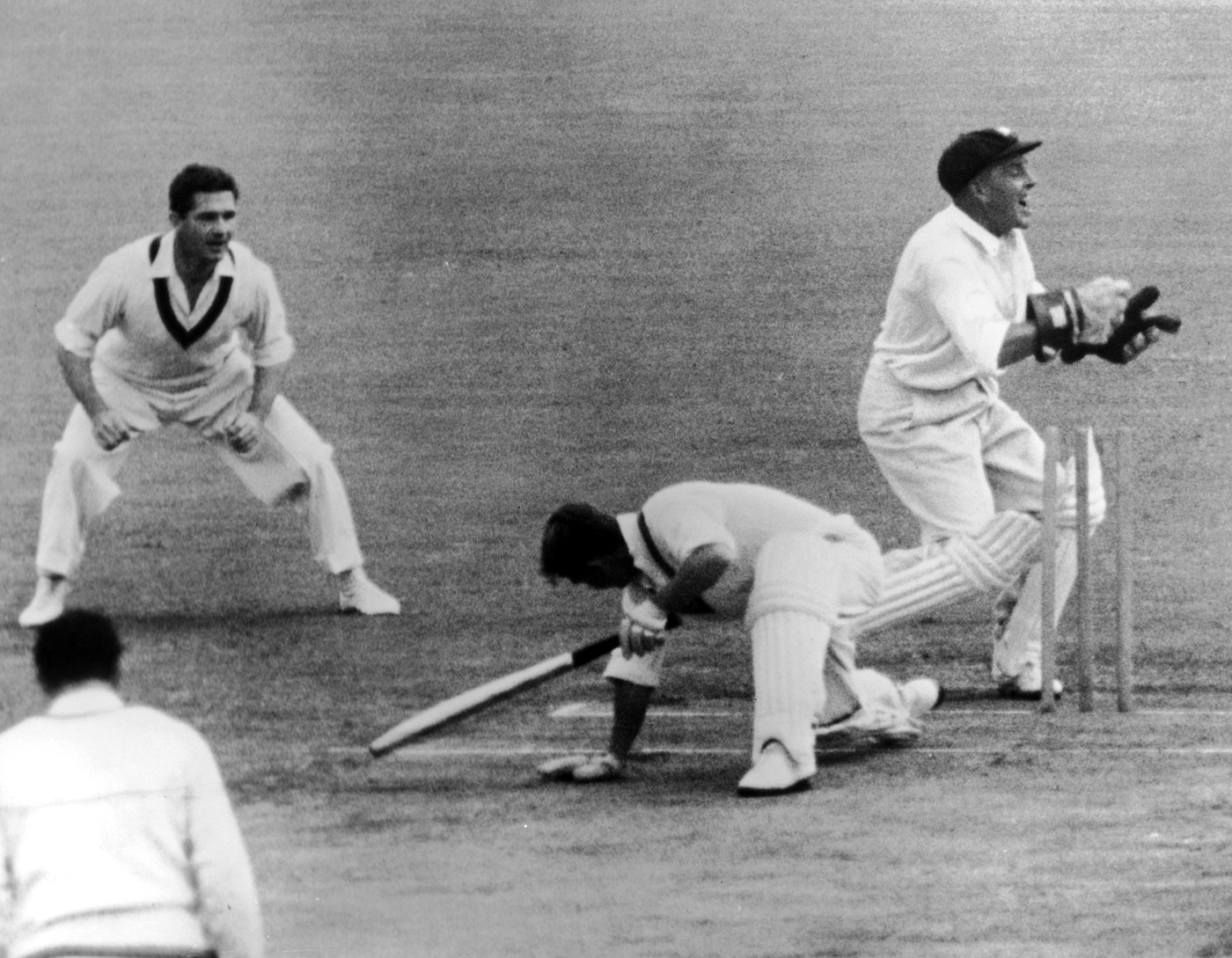 That Slater turned into a capable new-ball bowler was in itself surprising, given that he started his career as an offspinner in grade cricket in Perth. But he used to go to the pictures on a Friday or Saturday night and the newsreels would show cricket highlights, which exposed the young Slater to the actions of champions like Ray Lindwall and Keith Miller.

"I used to go to the nets and I would broadcast as I was bowling: 'Lindwall off 19 yards, runs in and bowls…' Anyway, one day in grade cricket at the WACA our opening bowler had been in a car accident and couldn't play. So our captain, a fella called Pat McCarthy, said, 'You'd better bowl some Lindwalls.' So I marked the 19 yards out and bowled some 'Lindwalls' and just stayed with it."

It was these "Lindwalls" that troubled England in the tour match, but Slater's ability to switch between pace and spin was what made him such an attractive prospect for the national selectors. He was called up for the second Test of that summer's Ashes series, at the MCG, and he found out late one afternoon when he returned to the Perth sporting goods store where he worked, after a day of drumming up business on the road.

"When I turned into Murray St, it was just chock-a-block jammed with traffic," Slater says. "This big television van had pulled up outside the sports shop. I thought, 'What the hell is going on here?' I took a hell of a time to get in and they were all there waiting for me!"

"I wrote Sir Donald Bradman a fairly strong letter, because I was pretty annoyed about not getting selected"

Slater travelled to Melbourne for the Test but was made 12th man. In the third Test, at the SCG, though, he was brought in for Lindsay Kline. Slater had dismissed England's captain, May, in both innings of the Perth tour match, once with offspin and once with pace, and on the first day of the Test he claimed May's wicket once again.

"He got on the back foot and went to punch one through the covers and Ken 'Slasher' Mackay ran straight at him, elevated a little and took a sensational catch," Slater says. "So I had one-for, and it happened to be Peter May. The next fella in was a bloke named Ted Dexter.

"I bowled spin to Ted Dexter with four short legs on a plum Sydney wicket. They should all be dead, really. Anyway, he was more nervous than me. He was playing his first Test in Australia. He just padded up to one that was dead straight and was going to hit middle halfway up. He was out lbw and I had 2 for 5. And then it was lunch.

"I remember walking in through lunch and you had to walk through the Members. I remember all these members with their mouths open, just glaring at me and thinking, 'Who is this bloody bloke?' It was an eerie feeling. We went out after lunch and Alan Davidson didn't come back on the field straight away. They called Alan Davidson 'The Claw' - he was a magnificent short fieldsman.

"Going to leg slip was Colin McDonald, where the Claw would normally have been fielding. The first ball after lunch, Roy Swetman was their new batsman, and he edged it chest high to Colin McDonald at leg slip and he dropped it. That would have been 3 for 5 with the tail to come. It's pretty hard to drop someone out of the team when they have 3 for 5. I reckon on the quality of batsmen dismissed, I'm the best in the world - May and Dexter!"

Australia's players train in the nets in Melbourne before the Test, in which Slater was 12th man © Getty Images

They remained Slater's only two Test wickets. He had no success in the second innings of the drawn Sydney Test, and although he remained in the squad for the next Test, at Adelaide Oval, he was made 12th man once again.

Slater continued playing for Western Australia in both cricket and Australian Rules football - he was a star footballer who captained WA to State of Origin wins against all five other states.

After retirement, he ran his own sports store, Slater Gartrell, which is still in operation in Perth, and he became a television and radio sports commentator. The past 12 years have been more challenging, though, after Slater was struck down by diverticulitis, suffered an overdose of antibiotics, and was left with a severe problem with his balance.

Now 80, he looks back on his one Test with fondness. There is disappointment that perceptions over his action ended his chances of further international cricket, but such is life. You move on.