Shivnarine Chanderpaul talks about batting long, batting with his son, and batting against Australia On his 69-ball hundred: "I only knew I'd reached my century when the announcement came over the loudspeaker" © Getty Images

My father, Khemraj, put up a net alongside our house, in Unity, a village near Georgetown, Guyana. Our back garden was right next to the local cricket club.

The West Indies selectors asked me to retire from one-day internationals after the 2011 World Cup and then dropped me when I wouldn't. My ODI record was good. Since 2006, I scored 3497 runs at an average of 53. Obviously I was upset about it.

Rotating the strike is one of the most important batting skills, particularly when things are tight, bowlers are on top and it's hard to pierce the field.

Brandon [son] and I put on 256 in a club game in Guyana, and we both scored centuries. Brandon was out there telling me what he would do and what he wouldn't do. I told him to calm down and play the situation, look for the best places to hit the ball.

My dad, my uncle, and anyone else who turned up would bowl to me. For hours.

Get your mind right for batting long periods. I always spent two hours in the nets at a time, sometimes two and a half hours.

"My dad was always telling me I should bat like Alvin Kallicharran. I never saw Alvin play, not until a few years ago, when he played in a charity match in Guyana"

Curtly Ambrose really helped me get to my first Test century. He came in and was running everything, singles, twos and threes.

You can understand getting dropped if you're not scoring runs. But it's something you have to forget. You can't live in the past.

I always admired batsmen with good concentration, who once they got themselves in, could go on to make big scores. People like Alastair Cook, Steve Waugh, Mahela Jayawardene and Sachin Tendulkar. The opposition had to get them early or they'd be in trouble.

Brandon is a bit too aggressive sometimes, like lots of youngsters. I'm trying to get him to realise that as an opening batsman you have to have a look at what the bowler is doing, and leave a few balls up front. You can't just go out there and smash everything. 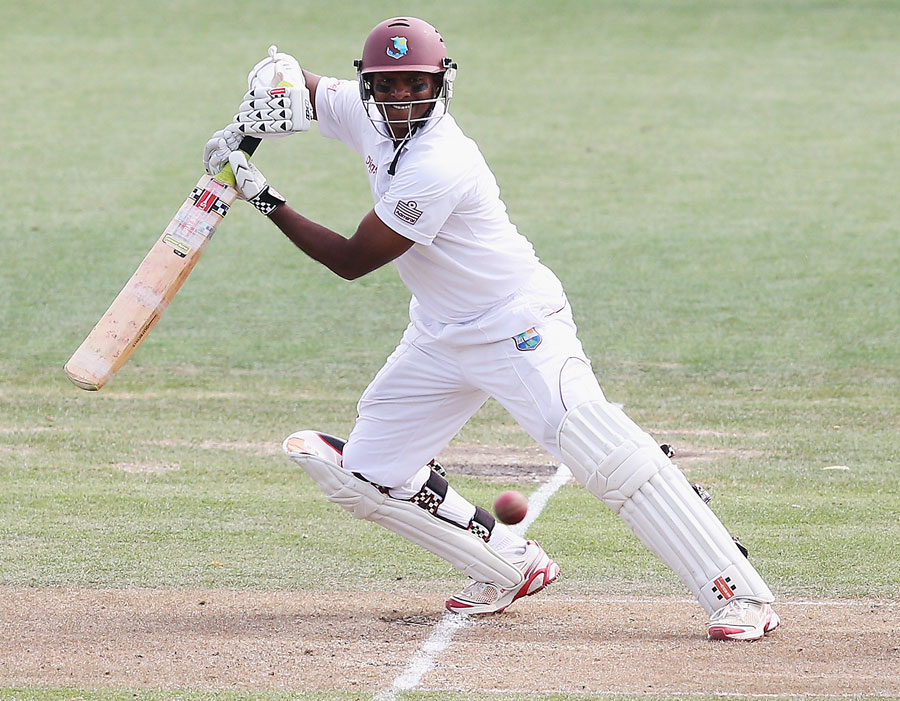 Steve Waugh was a real fighter. He never gave his wicket away, not even after he'd nicked one.

I wish I knew what's happened to all our tall fast bowlers. Hopefully there'll be some more soon.

In the Caribbean, pitches can be tough to bat on. Some bouncy, some not. Some spin, some don't. But this is what you prepare for, in the nets, over the years.

My dad taught me to be tough. That you have to stand up and face everything that's coming at you. That helped when bigger boys started bowling bouncers at me during street games.

A bit of competition between the batsmen is healthy. Each should want to be the one who's contributing to the team and getting more runs than his team-mates.

"Today, in the West Indies, parents wonder whether it's worth their children spending all day at the cricket. Only a few make it, and if you don't, there's no money"

I brought middle-order stability to the West Indies limited-overs teams. A bit of rearguard batting when we needed it. Bat the innings, hold the innings together.

I only won one Test in 14 as captain. I preferred batting, focusing on my own game instead of worrying about everyone and everything.

Marlon Samuels is more focused on his game these days, on his batting craft. He is more serious now than in the past. Every game, he wants to get a hundred.

If someone else gets a hundred and you don't, the next game, make sure it is you raising the bat.

Hopefully T20 will get more people into the game in the West Indies. T20 is popular, but people still like Test cricket over here. There's a lot of cricket on TV. "Brandon is a bit too aggressive sometimes. I'm trying to get him to realise that as an opening batsman you have to leave a few balls up front" © WICB Media/Ashley Allen Photo

In my first first-class game with Brandon, he got 42 in the first innings, I scored a century in the second.

Maybe I didn't get so much credit as some of the other [West Indian] guys. Perhaps that's because of the way I bat, because I'm not such an attacking player. But I get enough credit for what I've done and I'm thankful for it.

In West Indies regional cricket, people bowl fast, but they bowl all over the place and don't test the batsman's skills. You get a lot of short balls, but it doesn't prepare a young player for international cricket, where bowlers test your skills. We've got some good young fast bowlers around, but they need to learn about bowling consistently in good areas.

Carl Hooper once thrashed 20 in two overs to get to his hundred, because Wasim Akram was warming up to bowl. Akram could do anything he wanted with the ball. He bowled Hooper in the next over.

I batted for over a thousand minutes without getting out in two Tests against Australia in 2008. It was hard work. Yeah I got sledged, but it helped me. We still lost that series, though, which was disappointing. You do all that work, you're successful and physically drained, and there's nothing to show for it. But to win against the best team in the world, all your players have to play well. We weren't able to bowl out Australia twice.

"The West Indies selectors asked me to retire from one-day internationals after the 2011 World Cup and then dropped me, when I wouldn't"

Today in the West Indies, parents wonder whether it's worth their children spending all day at the cricket. Only a few make it, and if you don't, there's no money. Kids can go to school, spend a couple of hours playing basketball. They get an education, so they don't have to worry whether they make it or not. Hopefully T20 will bring more money into Caribbean cricket, then more parents will be interested again.

I knew it was going to be a good day when I pushed at my first ball and it went for four. It seemed like every time I laid bat on ball it beat the field. I ended up with the fourth fastest Test century. I'd just come off two hundreds in regional games against Jamaica and Leeward Islands, so I was in the zone.

Of all the opposing batsmen I saw play against the West Indies teams in the 1980s when I was growing up, Javed Miandad and Mohinder Amarnath played the quicks best.

Kemar Roach is a good bowler, has good pace and control, makes things difficult for the batsmen. We have to make sure we don't bowl him too much and stress him out so he gets injured.

It's important for a batsman to want to get runs, and to be thinking about big scores. 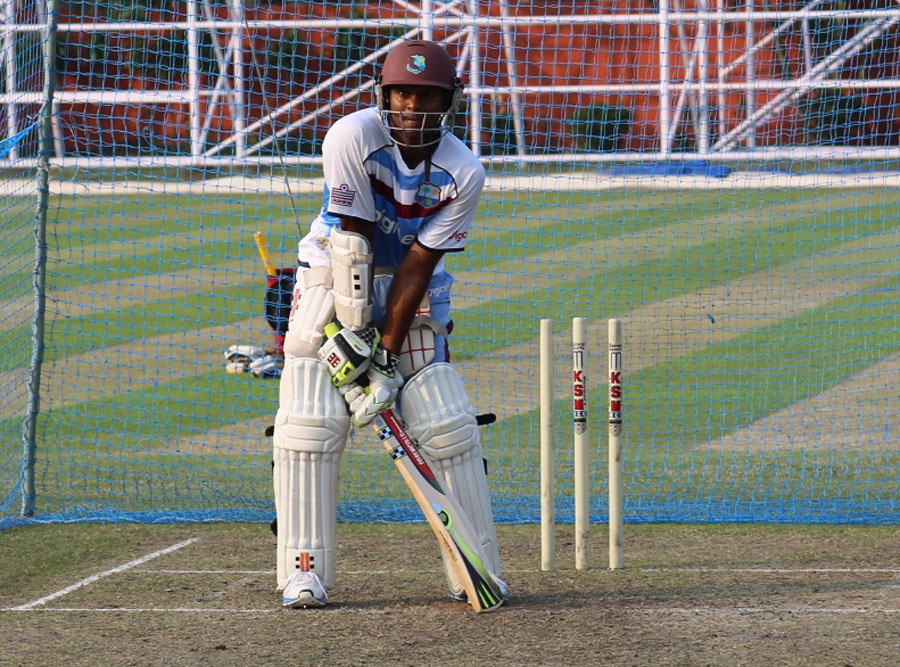 "I always spent two hours in the nets at a time, sometimes two and a half hours" © WICB

If Usain Bolt can bowl as fast as he runs, he should be good.

I wasn't thinking about how many balls I'd faced [Georgetown Test, 2003]. I only knew I'd reached my century when the announcement came over the loudspeaker. After the game Justin Langer and Ricky Ponting both said that it was one of the best hundreds they'd ever seen. I've had good days before and since, but I've never played that well.

Shane Warne was the best spinner I faced. He had so many variations.

My dad was always telling me I should bat like Alvin Kallicharran. I never saw Alvin play, not until a few years ago, when he played in a charity match in Guyana. He was in his late fifties but still scored a half-century. He could still bat with ease.

"I knew it was going to be a good day when I pushed at my first ball and it went for four. It seemed like every time I laid bat on ball, it beat the field. I ended up with the fourth fastest Test century"

Look for quick singles. It upsets the bowler's rhythm, particularly if there's a right- and left-hander batting. They can't bowl at one batsman over and over again, so it's harder for them to carry out their plans.

I remember watching Craig McDermott bowling bouncers at [Gordon] Greenidge and [Desmond] Haynes, in a Test match in Guyana, when I was a kid.

There have been a few young West Indian batters who've played some games and not yet established themselves. They need to go back to regional cricket, get stronger and keep knocking on the door.

I learned how to bowl, so I could get people out and bat again.

I was at the other end when Brian Lara broke the world record against England in Antigua in 1994. There were people on the pitch, Brian was hugging me. It was a special moment and only my fourth Test. 'I don't think the selectors handled my exit properly'

Shivnarine Chanderpaul, now preparing for a second career in coaching, on not getting the farewell he thought he deserved Shivnarine Chanderpaul was the bedrock of the West Indies middle order over 20 years. But the circumstances leading to his inevitable retirement weren't pleasant Shiv on the shore

When the great flood or fire finishes the world, Chanderpaul may still be batting. Here he is in his element: his home in Unity, by the Atlantic