An immortal at The Oval

The road that leads from despair to ecstasy tends to be long, winding steeply uphill and full of hidden traps. But every so often in sport and - more rarely - in life, a sudden, drastic shortcut will take you from one state to another in a matter of minutes.

That's how it was in 2005. Yes, I know it's the second time I've brought up 2005 in this series, but that's a reflection of the staggering emotional impact that summer had on English cricket followers. It's hard to explain to anyone who's not English, but I'll have a bash.

By the end of the final day's play of the final Test, at The Oval, England held the Ashes for the first time in 16 years and 42 days… and every time I see that figure I am once again amazed that it was so short. It felt like an eternity and a half, as if England were doomed to humiliation until the world ended.

That's why the series of 2005 meant such a disproportionate amount to long-term cricket followers in England. That's why the moment when Steve Harmison's bumper struck Justin Langer in the first over of the series was such a big deal, as I've already mentioned in this space.

Towards the end of that series England were on top but didn't dare to believe it. They had Australia by the throat but couldn't bring themselves to squeeze. They took a fraught 2-1 lead into the last Test at The Oval. Anything but an Australian win would give them the Ashes. But could England dare to stand up to them at the last?

Towards the end of that series England were on top but didn't dare to believe it. They had Australia by the throat but couldn't bring themselves to squeeze

Autumnal weather blew in, murky light came with it. A see-sawing match had the teams six runs apart after first innings with England to bat next. Surely nothing could go wrong now…

But it did. Of course it did. England collapsed. When any other Test team in the world collapses, England get royalties. At lunch on the last day Australia were still only 133 runs behind with five wickets to get. Kevin Pietersen, controversially brought into the team for the first time at the beginning of the series, was at the crease and had already been dropped twice. It looked dreadful.

Surely only the weather could save England. The crowd raised umbrellas to fend off the rain that refused to fall; the Australian cricketers took the field in sunglasses despite the murk. Very jovial, but in sporting terms this was a desperate situation.

England needed to block for a draw. Paul Collingwood, their last recognised batsman, was at one end, playing in the series for the first time. And there was Pietersen, batting like a man with his trousers on fire. It was all about to go quite horribly wrong.

Pietersen's response would have been considered irresponsible in a beer match. Here, with everything depending on barn-door defence, he went nuts and hurled his bat at everything that came his way. Had he got out he'd never have been forgiven.

But he hit everything. Impossibly, against all precedent, all logic and all good sense, it came off. Brett Lee was bowling at around 95mph. Pietersen took after him as if he was a middle-aged trundler. Michael Vaughan, the England captain, had told him, "Play your natural game." But he didn't. Instead he played his unnatural game. In The Iliad, the gods are always intervening in the Trojan War, breathing divine strength into one or other of their favourites so that for a while he fights like an immortal.

That's what it looked like at The Oval that day. It was as if Pietersen had transcended the limitations of the human frame and the human mind. Normal rules were suspended, normal life was put to one side. This was sport as it exists in the mind of a ten-year-old playing cricket with a garage door as his opponent.

I have seen many great days of cricket, but all of them have come down to basic dynamics of human opposition - batsman against bowler and fielders against batsmen. There have been passages of play when I have watched players reach out for greatness, and sometimes they even touch it.

But this wasn't like that at all. It was as if Pietersen had taken cricket out of humanity's hand and replaced it with something more audacious than we are capable of imagining. And all the while there was Collingwood scoring 10 in 72 minutes, for which he was rightly given an MBE.

Pietersen was out for 158, playing for a draw by hitting 15 fours and seven sixes. The match was saved, the series was won. Despair had turned to ecstasy, the impossible had been made actual before our eyes and the Ashes were in English hands again at last. 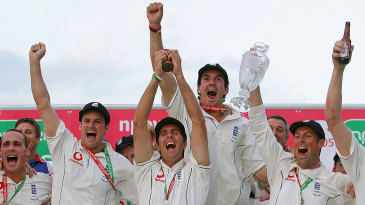 When I ditched the Aussies for England