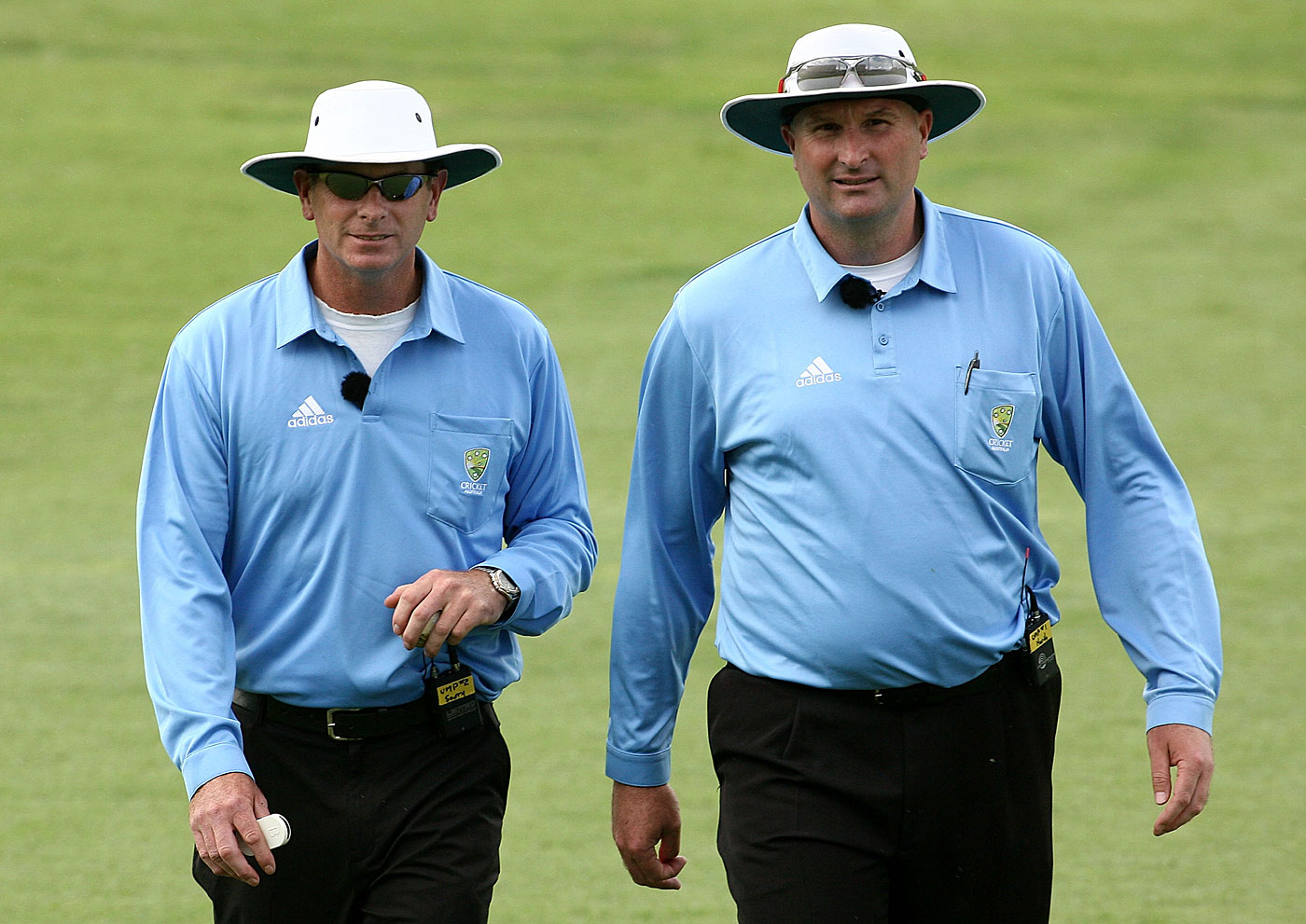 Already Wilson has taken some giant strides - at his size there are no other kind - and stood in four ODIs and four T20Is. Hard work and determination gained him a baggy green and those same qualities will be required to earn the umpiring equivalent. On sheer numbers alone it is a massive challenge: the ICC's Elite Panel, from whom most Test umpiring appointments are made, consists of only 12 men.

"I want to do Test cricket, but it's a patience game - just keep getting more experience and do more games," Wilson says. "Again, it's being in the right place at the right time."

There is a reason he used the word "again". "Right place, right time" is how he describes his 1998 call-up to Australia's Test team. But that phrase suggests his baggy green was won via nothing but luck. Wilson worked hard to put himself in the right place and waited for the right time to arrive.

Like many Test players of the 1990s, he came through the pathway of the Australian Cricket Academy. So far, so normal. But what was unusual was how he came to the Academy. While still a teenager, Wilson left his Newcastle home and travelled halfway across the country to Adelaide to pitch his case to Academy director Rod Marsh.

"I think most people thought it was the job you went to and just had the pipe and slippers, had your cups of tea. But it's a completely different ball game now" On being a TV umpire

This was not how the Academy worked. Scholars were invited; they didn't just turn up and gatecrash. Until Wilson.

"I just rocked up to the Academy offices," Wilson says. "I said, 'I'm looking to see Rod Marsh'... Rod said, 'Try to get rid of him.' Begrudgingly, Rod accepted me to come into his office and say hello. As he describes it, he says, 'Here's this large lump of a lad who filled in the doorway.' Our friendship started from there.

"You look back at it now and being a father of three kids, I can't sit back and say, don't go and do something unconventional. It was genuinely unconventional at the time, and no one else has really done it since. It was a unique thing and I'm very glad I did it."

Wilson was given a few weeks at the Academy, which turned into a few months, which eventually turned into a full scholarship. Within a couple of years he had made his domestic one-day debut for his adopted state of South Australia, and a Sheffield Shield debut came in 1995-96. His trajectory kept rising, an ODI call-up coming in 1997-98, and a place on the Test tour of India that followed.

Glenn McGrath missed the tour due to a torn abdominal muscle, and Australia's attack in the first Test in Chennai was made up of Michael Kasprowicz, Paul Reiffel, Shane Warne and Gavin Robertson. Wilson was just happy to be part of the squad. But come the second Test in Kolkata, he became Australia's 376th Test cricketer.

"I found out the morning of the match," he says. "My now umpiring partner Paul Reiffel had got injured in the first Test, so I was in the mix along with Adam Dale, who at that stage hadn't played. And Stuart MacGill was on that tour, and Greg Blewett was bowling some overs... so it's me, Dale or MacGill, and I was lucky to get the call-up at Eden Gardens. "Mark Taylor announced it, got presented with the cap, the old process from the captain. I was honestly blessed to play one game. There were a handful of guys who weren't available for selection for that tour and also that Test match. I was in the right place at the right time, and I was extremely lucky to play one Test match."

Not that the match went to plan for Wilson, whose entire Test record consists of 12 overs for 50 runs without a wicket, and no runs from two innings. He remembers the noise of Eden Gardens, the thrill of playing at such a marquee venue, the obsession of Indian fans who knew everything about his career - and the devastation of breaking down with injury mid-match.

"It was the back end of a long summer and we all go into matches carrying a couple of niggles," he says. "What I thought was a niggle was worse than that, and during the Test match it went bang. I did a groin in the Test match and later on was diagnosed with osteitis pubis, which was not really well known at that stage but it's a very common one these days.

"To me it was the devastation of knowing in your own mind you've got an injury that's not going to get you through the Test, let alone the rest of the tour... You know in the back of your own mind that this might be my only chance, and it was. You didn't have to be Einstein to work that out, with all the number of players coming through the system and onto the scene, that it was probably going to be my only chance."

And so it was. Wilson never represented Australia again, in any format. He played out his career with South Australia and then Western Australia, and wondered what he would do when it all ended. Coaching was his first move, but something had nagged at him even during his playing days. He describes it as an itch he had to scratch. He wanted to become an umpire.

His timing was good, for in the early 2000s, Cricket Australia was keen to get more former first-class players involved in umpiring, hence Reiffel and Rod Tucker were being welcomed into a project panel. After they were promoted to the full national panel in 2005, Wilson was the next in line. Not that he was lured into it; he instigated the move himself, having discussed the career with umpire Daryl Harper as early as 2002.

"I just rocked up to the Academy offices. I said 'I'm looking to see Rod Marsh'... Rod said, 'Try to get rid of him'" On turning up uninvited at the Australian Cricket Academy in his teens

"It's a pretty major decision," he says. "In Australia it was uncommon for first-class players to go into umpiring. Rod and Paul were trailblazers. In England it's very common. In fact, the majority of the national panel are former first-class players. I thought, 'Why not?' I took the plunge."

It took some getting used to, being out on the field but not as a competitor. Concentrating on every single ball of a day's play, often for several days in a row.

"Early on, you probably found yourself drifting, you find yourself going through the old habits of someone fielding at fine leg or mid-on or mid-off," Wilson says. "But the routines as a player in the field aren't dissimilar to an umpire. You switch up, switch down. When the bowler runs in, as a batter you're switching on for that ball to be bowled, and as an umpire it's no different.

"We try and find a bit of downtime while the ball is dead. But once the bowler is running in you switch on again. Those things that became second nature as a player became very handy as an umpire. You just need to adjust it slightly, because you have to be on and off all day every day as an umpire."

What did he find hard at first?

"It's the nuances, the signals, being on the right side, going to the right side when the ball is in play, staying still, concentrating on the front foot, then bringing the ball into focus - all those things that as an experienced umpire ten years down the track I take for granted as part of my routine. It's a completely different world to being a player, even though we're on the same ground."

He also learnt quickly that there is far more to being an umpire than making out or not-out decisions. A good umpire is a good man manager, who can defuse a tense situation before it goes too far, or prevent one entirely by communicating well in the first place. And that communication is not only with players, coaches and ground staff, but as you rise to the elite level, it is event managers, media managers, all sorts of additional stakeholders. Wilson's ODI career was more noteworthy than his Test one. He picked up 13 wickets in 11 ODIs © Getty Images

At the core of the job, though, are the on-field decisions. That is what an umpire is judged on. It looks easy from the comfort of the living room but is deceptively difficult. It is mentally draining - "Umpires sleep very well during a four-day game," Wilson says - and certain decisions are incredibly challenging in the split-second an umpire has at his disposal.

"With the advent of BBL etc, there is also the noise factor. If the players can't hear each other on the field, there's a fair chance that when there's a fine nick it becomes very difficult for umpires to pick things up. Noisy venues are a real challenge for umpires because we use eyes and ears. Sometimes, one of those faculties can be taken away from us purely from it being a noisy venue."

DRS is a useful safety net if available and Wilson is a great believer in using the technology, but the system brings its own challenges. And not just for the umpire on the field who has his decisions scrutinised. Sitting in the chair as TV umpire requires a different set of skills to standing on the field.

"I think most people thought it was the job you went to and just had the pipe and slippers, had your cups of tea," Wilson says. "But it's a completely different ball game now. It's effectively becoming a specialised role, over time. Your skills are not only to do with going through the processes and protocols, depending on the on-field decision and whether it's a straight-out decision or something sent upstairs with a soft signal.

"If we can communicate clearly then it's effectively educating the people sitting at home about the process the third umpire is going through. Some of the really good ones around the world are doing that really effectively, and actually educating the person at home watching the game. You're probably educating the commentators as well, to a degree."

Clear communication, forensic analysis, immaculate concentration - these are not traits one might necessarily expect of a big fast bowler nicknamed "Blocker". Nevertheless they are traits that he possesses, and have helped him become an international umpire.

Perhaps one day he will join Reiffel, Charles Bannerman, George Coulthard, George McShane and Arthur Richardson as Australian Test player-umpires. No doubt that would make him immensely proud, as he is of that one Test back in 1998.

"In that era, to have played any games for Australia - looking back on it now, at the players around at the time, it was just an absolute honour."