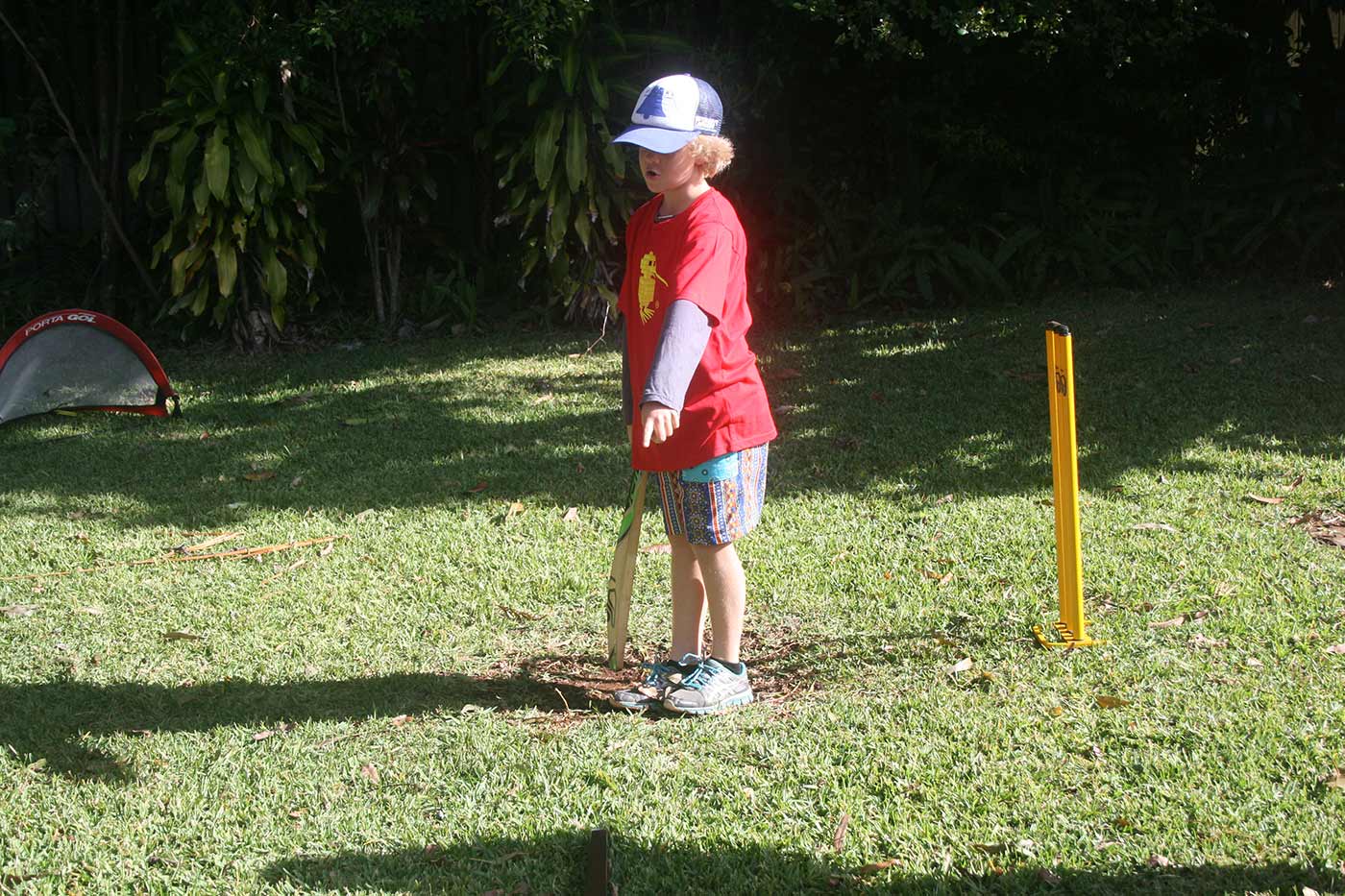 Runs in the family

Letter from… the Sunshine Coast

My cricket helmet has lasted 25 years but currently sits in a puddle at short leg in the backyard. It's rarely been hit, and really offers only cosmetic protection, but will soon be unusable. The mistake? I gave it to my children, a pair of young cricket lovers who, despite knowing their Waughs from Star Wars, prefer it as an accessory in their lightsabre duels. Sadly, the force of putting things away is still to awaken.

Watching the younglings play one day got me thinking about teaching sports watchers. Or, in our house, ensuring they stay on the light side of the passion-versus-dangerous-obsession spectrum. Because the discussions can get intense quite quickly here, both in the backyard and in front of the television. While it's important for them to know Kylo Ren from Mitchell Johnson, at what point does the interest level need to be scaled back?

See, we already talk in cricket initials and puns. What six-year-old walks into an international airport to see the customs sign for Australian Border Force and immediately thinks of Allan? When working out directions, we might discuss whether to go Marcus North or Tim Southee. After a shower, one of them is often Mitchell Starc-ers. Outside, my boy commentates himself as SPD Smith, and proudly tells me his school friends now copy the lightsabre-style backlift he interpreted from Australia's captain.

At this stage I hope we're at the quirky end of fandom. And it's not totally out of family character. I once tried to name a chook Greg Chappell (we didn't have any ducks) and a puppy Billy McDermott. We're not quite in the phase where a cricket cap is part of the pyjama uniform. But my boy does try to trick me with trivia and sometimes my girl joins in.

"What does the K stand for in MEK Hussey?" Easy. "How many did GS Chappell make in the second innings at Headingley in 1975?" Seriously? "Why is Murali's name spelt in different ways?" Um, it's cultural? Maybe the children are training me.

We already talk in cricket initials and puns. When working out directions, we might discuss whether to go Marcus North or Tim Southee

T20 and Snapchat are banned in the house, but books and Tests are encouraged. It's why the players named are more often historical. My boy's self-selected top-shelf reading is based around three cricket books and Lego Star Wars guides. There's the Cricinfo Guide to International Cricket 2009 - the year of his only Ashes tour, aged one - the Wisden Book of Test Cricket 1876-77 to 1977-78, and Richie Benaud's 1981-82 Australian season guide. Wisden arrives in May or June and there is brief excitement, but it's only a day or two before Cricinfo 2009 reappears beside his pillow.

Scorecards are read for fun - and shared. "Dad! BM Laird. Not out 3!" "RAL Massie - 16 WICKETS!" Sometimes I'm allowed to add context - like, your grandfather insists he was drunk that day at Lord's, or Massie only played five more Tests. But mostly it's about runs scored and wickets taken. At what age do we have the talk about Statsguru?

Watching involves attempting to sit still but is no less exhausting than playing. This is where some parental training already appears beneficial, and particularly rewarding in the long term. Nobody asks who's winning anymore, or stands in front of the television before the final ball (it happened once, during a World Cup final). They know it's okay to watch in silence and save their flood of questions for the ads. And now, sometimes, they even tell me to be quiet.

But it's not just about the enjoyment of spectating for my boy. "A fun thing about watching cricket is seeing how people bat and bowl," he says promisingly, before adding that it's also a pretty good way to find out a player's weaknesses. So he's watching for statistics, strategy and technical disintegration. Are you Steve Waugh in disguise?

Of course, it's great for our family that they're cricket fans. But should this level of interest be encouraged or discouraged? We went to watch Australia and New Zealand at the Gabba last year, a first attempt at a proper day's spectating after the Australia-Bangladesh World Cup washout. They had been well briefed on the pace of the day, and that there would be no T20 Rocket Man. This was a practical lesson in watching cricket.

My girl remembers it being too hot, sending her under the seat for some cool comfort, and later having her view blocked by a tall man. "It was my first time watching a Test match and apart from those catastrophes it was a cool game and I had fun," she says. A little older than her brother, she knows about Lisa Sthalekar's catch to seal the 2013 World Cup, and how Ellyse Perry chooses cricket mostly over football.

I like to think they will select what they want to watch as sports followers. They also know names and numbers in cycling, football, surfing, golf and tennis. But in their upbringing, cricket has got a significant head start. My proudest moment as a sports-watching teacher was when they started asking how many Chris Rogers had made. Now he's gone and they are back to being excited by David Warner. That's fine - there's a lot to be excited by - but they have an appreciation of a traditional Test batsman.

Then I started fearing for them in the playground. There's no classroom kudos in having Chris Rogers as your last line of argumentative defence. Maybe they better start looking after that rotting helmet.