'Footwork is the most important thing for a keeper'

Former Australia player Len Maddocks talks about growing up in Melbourne, being Laker's tenth, and dinners with the Don This interview was conducted in 2012

I played my first game for North Melbourne when I was 16 and my last when I was 46.

I only broke a finger once, the little finger on my right hand. I had that when I was picked for my first Test. I went to see my doctor on the way to the MCG and said can you shove a needle in it. I played my first two Test matches with those two fingers taped together.

Any time I wasn't playing cricket, I worked for APM, Australian Paper Manufacturers. I started there when I was 16 and eventually I got to the stage when I had toured once everywhere and the thought of missing out on the accountancy future didn't appeal to me greatly.

I was Laker's tenth wicket at Manchester. The photo that somebody sent me, Laker and the keeper and everybody is up in the air appealing and I'm already walking off the ground! I knew I was plumb.

I got to know Bradman quite well. He used to always go to the cricket at the Adelaide Oval and sit in the same chair. He used to invite me home for dinner on Saturday night. I think it was probably to keep his ear and eye on Australian Paper Manufacturers shares! He was always easy to get on with. He knew as much about APM as I did, and I was the head office accountant. He was just that sort of bloke. He would read something and it was there forever.

My brother Dick played football for North Melbourne. He got five Brownlow Medal votes. I was on North Melbourne Football Club's list in the mid-1940s but it was at the time that I knew I was going somewhere in cricket.

I made a hundred against New Zealand. It was called a Test over there but I don't think it was recorded as a Test here.

Bill Lawry was probably the best captain I saw. Every time I saw him captain a side he did something good and smart. I reckon Ian Chappell was about a ten times better captain than Greg.

We got dudded by the curator [at Old Trafford in 1956]. We didn't hold it against Laker. He didn't have anything to do with the pitch. He just bowled extra well on a pitch that was perfect for him. Tony Lock didn't bowl well enough.

I played baseball for Victoria too. I played against the United States Navy. All these Yank sailors came out and we played them at Junction Oval. One of the Yanks belted our pitcher the length of the St Kilda Oval. He could have crawled around his hands and knees and got a home run, instead of which he ran like mad, jumped the last couple of yards in the air and landed on the home plate. He never moved again. He died on the spot.

"Bradman knew as much about Australian Paper Manufacturers as I did, and I was the head office accountant. He was just that sort of bloke. He would read something and it was there forever"

Healy was the best of the recent keepers. He could bat too.

I went to New Zealand as vice-captain. The manager was an older bloke called Clyde Smith. He was president of the first club I played with in Tasmania. He nominated me as "captain of vice" on the trip to New Zealand, and until he died he was still calling me that.

If I was looking for a batsman to bat for my life, Arthur Morris and Bill Lawry would be line ball.

I happened to have been appointed manager of the 1977 tour, when the lid blew off World Series Cricket.

The rules have changed a bit. The boundary line worries me a bit - some of them are 30 yards inside the fence. Where that's going to finish up nobody knows.

I spent maybe six years running the bar at North Melbourne Cricket Club, as a non-drinker. The first beer I had in my life, I was 23. It was Dick's 21st birthday. Our father took his three sons into the city - got a leave pass from Mum, because he wasn't allowed to drink at home - and bought us dinner, with beer, at some pub or other, and then he took us to the Tivoli, which had some pretty dicey girls dancing.

I always had something to fall back on. The board of APM had issued an instruction that if Maddocks was playing cricket, he was to be paid half his salary as well. That happened all of my cricket life, I was paid half my salary by APM even though I wasn't there most of the time. Maddocks walks off after being bowled by Jim Laker on day two at Old Trafford, 1956. Three days later, he would be the last man out, lbw to Laker © PA Photos

We flew to the West Indies and came back by ship. We went to England by ship and stopped off in Sri Lanka, which was then called Ceylon. We played a match there, at Kandy. It took us a few hours' drive to get there and back and how we didn't kill dozens of people, I'll never know. The road went through all these villages and there's kids all over the place, old people on walking sticks, and the bloody taxi drivers that took us went straight through the middle.

Dick died when he was 40, from a heart attack. He was the unlucky one.

We started a table-tennis club at North Melbourne and one of our opponents was Frank Sedgman. He was a kid, getting into tennis. We got to know him quite well through table tennis.

Footwork is the most important thing for a wicketkeeper. If your feet are right, everything moves with it.

Mum told a good story for years about her first day at a Test match. She was sitting up in the old Grey Smith Stand and some smart-arse in the crowd expressed the opinion that I would never hold my place because I drank too much. My mother was sitting there knowing that I hadn't had a drink! She said it was the hardest thing she'd ever done not to turn around and say something.

It all started with North Melbourne Football Club. In 1932 I was six years old. I was the middle one of three boys. Dad took the three of us to North Melbourne and signed us up as junior members. I've been there ever since. 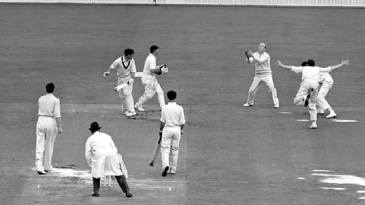