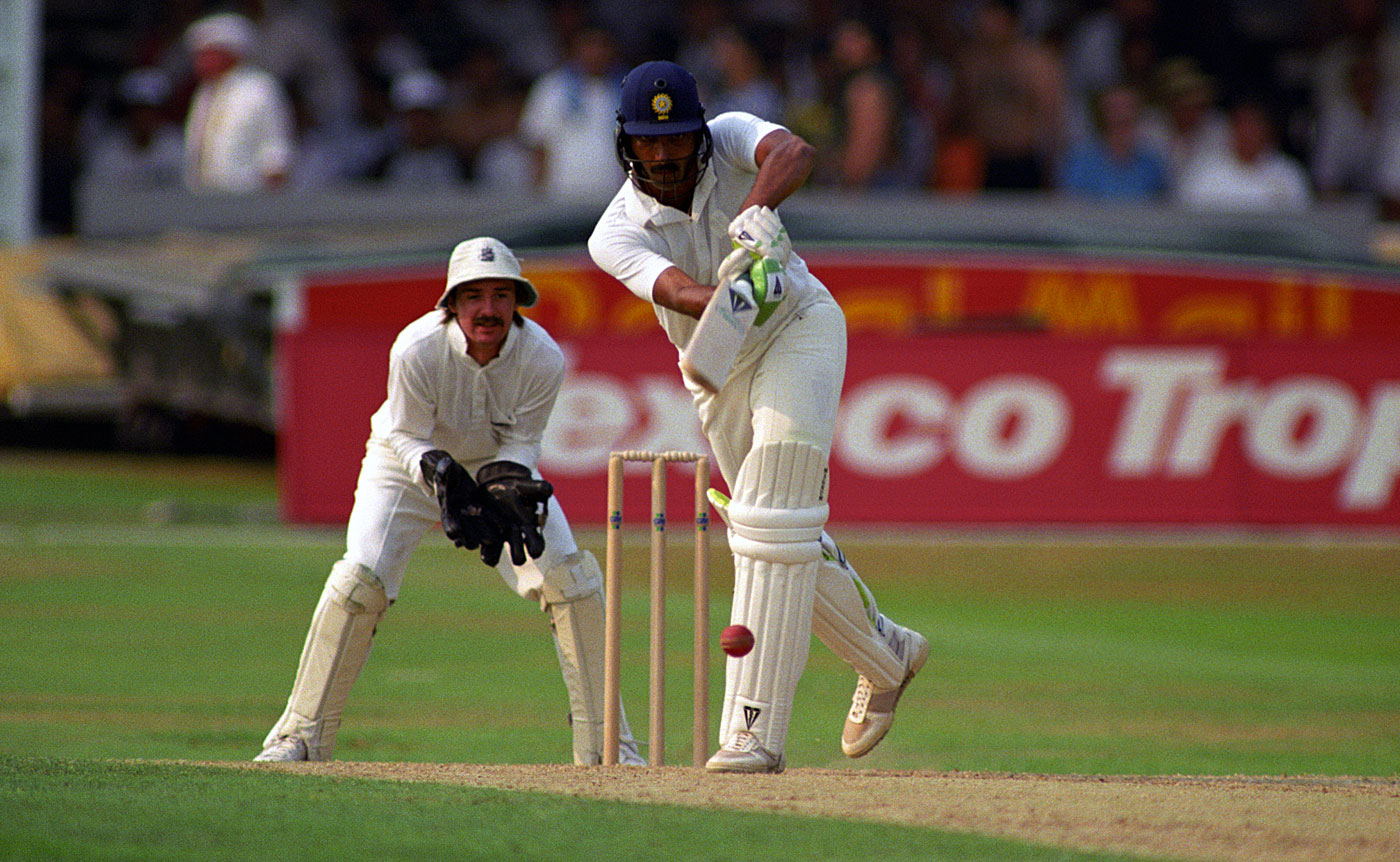 Smooth like Shaz: when needed, Shastri could step up and lead the charge, but he was just as comfortable playing second fiddle

The fly in the ointment

To love him, to hate him or to feel something in between? When it comes to Ravi Shastri, all three results are possible

The first time I really noticed Ravi Shastri was via a scorecard I pored over on June 19, 1983. A day earlier, Kapil Dev had authored a cricketing miracle in Tunbridge Wells against Zimbabwe. My dad, my uncle and I were parsing the scorecard to get a handle on how the game had played out.

We habitually disagreed on everything cricket, but the family quorum was unanimous on one point - Ravi Shastri, who had scored one run off six balls and given away seven runs in his only over, was a waste of good food.

Our judgement was vindicated - he didn't play another game in that World Cup. My sister, who had a poster of Shastri on her bedroom wall - with two unsightly slits in the middle from when she had ripped it out of a magazine without regard to the staples - lost interest.

The Benson & Hedges World Championship, two years later, reinforced our visceral dislike. When he scored 2 and 13 in the first two games, we nodded in agreement with common consensus - he was in the team only because of Sunil Gavaskar. When he scored 51 against Australia, we contrasted the 94 balls he faced against Kris Srikkanth's innings of 93 off 115 - now that's how you do it. In the final against Pakistan, we vented in disgust as he used up nearly half the innings to stodge his way to 63 not out, mostly by flicking the ball off his hips, while at the other end Srikkanth buccaneered his way to 67 off just 77.

My sister "ooh-ed" in delight as she watched Shastri collect the keys to the Audi that marked his coronation as the Champion of Champions. We three "aah-ed" in disgust. Dad thought Srikkanth should have got it; my uncle advocated Laxman Sivaramakrishnan; and I made an impassioned case for the charismatic Sadanand Viswanath. Anyone but Shastri, really. He is selfish, we agreed. Limited. Boring. Can't bat. Can't bowl. And in the outfield, god, by the time he condescends to bend down from that great height…

Five years later I was a young editor at Mid-Day and Harsha Bhogle was our man in England. Shastri had responded to Graham Gooch's monumental 333 in the Lord's Test with a century of his own, but was shaded by Mohammad Azharuddin's electric 121 off just 111 balls. Then, in the third Test, Shastri batted for nine-plus hours, faced 436 balls, and scored 187.

It was a monument to true grit. So? Do you like grit in your eye?

"Watching Shastri bat is like admiring the Qutub Minar: tall, timeless, solid," Bhogle wrote then. "You admire it for the virtues, not for its style."

I clipped that piece and mailed it to Dad. I remember the response, in his laboured cursive: "Have you seen the Qutub Minar? You can look at it for all of two minutes. After that, it's just this thing that's there… "

In the mental gallery of cricketers I have followed, first as fan and then as reporter, that remark captions the image of Ravi Shastri - "just this thing that's there". Who in hell admires something simply because it exists?

And yet, even as I attempt to distil my atavistic dislike into words, a contrarian highlights reel plays out in the back of the mind. It starts with a 19-year-old landing in New Zealand on February 20, 1981 - one day before the first Test against Geoff Howarth's side. His debut series, which began with a maiden to the New Zealand captain, saw him shade the likes of Richard Hadlee, Lance Cairns and Kapil as the highest wicket-taker on either side.

In the space of the next 18 months his grit - that word again - saw him climb up the batting ladder from No. 10, through every single position, all the way up to No. 1. He joined forces with Mohinder Amarnath to save the first Test of the 1984-85 tour of Pakistan, and followed it up with a century, part of a 200-run partnership with Sandeep Patil, in the next. Back home, he scored what was only the second ODI century by an Indian, after Kapil's iconic 175 not out against Zimbabwe. And he followed up that century against Australia, in Indore, with another hundred two months later, against England in Cuttack.

His 142 in Bombay set up a Test win against England; his encore was another century in the third Test, in Calcutta, that anchored a record-setting 214-run partnership with Azharuddin. He batted on all the five days of that Test, his 111 taking him the better part of seven and a half hours. 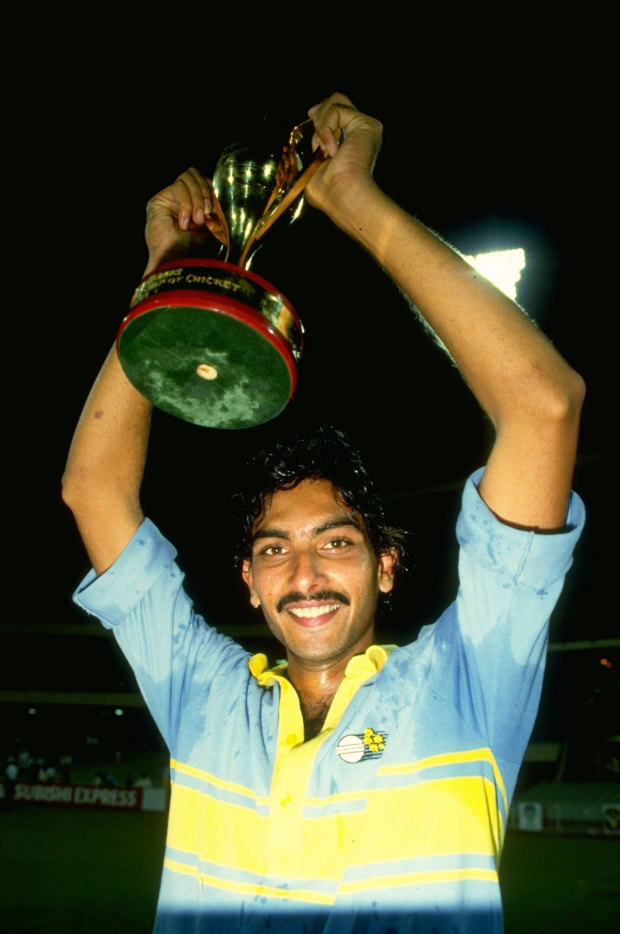 Champion of Champions at the World Championship of Cricket in 1985. Really now? © Getty Images

Those highlights sum up the quintessential Shastri - a monochromatic player whose monumental presence at one end allowed the stars the freedom to shine at the other. But there was more to his play than that single note, just as there was more to his batting than the utilitarian push off the hips, enshrined in lore as the chapati shot. In a Ranji Trophy game in early 1985, he scored his first 100 off just 80 balls and then raced to his double-century in a further 43, including the storied over off left-arm spinner Tilak Raj that disappeared for six consecutive sixes. It was the fastest double-century in first-class cricket then; it remains the joint-fastest till date - who woulda thunk, huh? In the final of the 50th year of the Ranji Trophy, in 1985, he took a match-winning 4 for 91 and 8 for 91 to go with a fighting 76 in the second innings to earn Bombay their 30th title.

"I can get plenty of first violinists," ace conductor Leonard Bernstein once said. "But to find one who can play second violin with enthusiasm - that's the problem. Yet if there is no one to play second fiddle there is no harmony."

When he had to, Shastri could step up and lead the orchestra. But he was an equally committed second fiddle - to Srikkanth, Gavaskar, Viswanath, Vengsarkar, Azharuddin and Tendulkar among others with the bat; to the likes of Siva and Maninder Singh with the ball.

The highlights reel spins its way to Bridgetown 1989, where Shastri was at the receiving end of one of the greatest sledges ever. It was on a venomous Kensington Oval track, against an attack led by Malcolm Marshall, Curtly Ambrose and Courtney Walsh, abetted by Ian Bishop, the most recent addition to the overstocked arsenal of brutal pace. Facing a 56-run deficit in the first innings, Shastri came out to bat with India 0 for 1 (Sidhu). Marshall, in the midst of a masterclass in the lethal beauty that is true pace, produced a ripper that bored into Shastri's groin. The fielders crowded around Shastri as he writhed on the ground. Desmond Haynes bent low and, in a voice of infinite concern, said "Ravi, that girl you were to date tonight, can I have her number? You are no use to her now, maan!"

We habitually disagreed on everything cricket, but the family quorum was unanimous on one point - Ravi Shastri was a waste of good food

Shastri laughed as he writhed in agony. And then he got back on his feet and played one of the most defiant knocks by an Indian, ever - an epic that lasted close to seven and a half hours, in which his first 17 runs took nearly three hours, even as Arun Lal, Vengsarkar, Azharuddin, Manjrekar and Kapil were scythed down at the other end. He took everything the pace quartet could throw at him, and ended with a Man-of-the-Match century in a lost cause.

The reel winds down in a soft whirr of nostalgia, and the rational part of me recognises that enduring legends have been constructed of less compelling material. Perhaps if he had walked off into the sunset after that last Test, against South Africa in Port Elizabeth in December 1992… Perhaps if he had left me to savour the memories, to miss him a little on the innumerable occasions when the team could have done with a bit of his doggedness, his grit, his guts… Perhaps then, in the light of the rear-view mirror, admiration would have been unalloyed.

But no, he came right back, an over-loud presence in the commentary box spraying a limited set of stock phrases, like so many tracer bullets, all over the action. And he reminded me of what he used to do on the cricket field - make very little go a very long way. A rare and valuable quality, no doubt - and I admire hate the man for it.

Illogical, yes. Irrational, certainly. But that is how it is, and I cannot explain why. The closest I can get is to recall the English poet Tom Brown. Caught in some schoolboy mischief by John Fell, dean of Christ Church college in Oxford, and challenged to extemporaneously translate a famous Martial epigram to avoid expulsion, Brown produced this:

That's my problem - the reason why, I cannot tell. Maybe if this argument were to go right down to the wire…

Prem Panicker is a journalist and the editor of Peepli.org 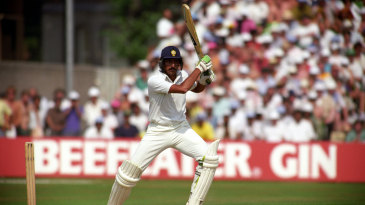 We might know him better as a commentator, but in his day he was a fine spinner and, when called on, a gritty opener 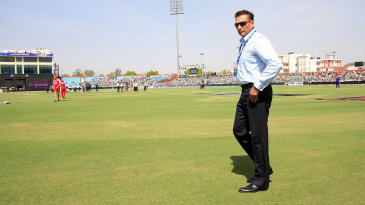 Ravi Shastri holds forth on his role with the Indian team, the challenge of playing three formats, his relationship with the BCCI, and the promise of the IPL 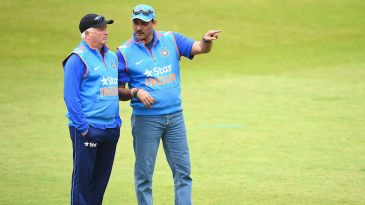 I got more than I expected - Shastri

ESPNcricinfo spoke to Ravi Shastri, India's new team director, after the conclusion of the tour of England, where MS Dhoni's team lost the Tests, won the ODIs and then lost the only Twenty20 international