When Tillakaratne Dilshan played his final international matches this month, special attention was being paid by a forklift driver in Melbourne's western suburbs. It drew his interest not because he was Australian and Dilshan was playing against Australia, but because he was a Sri Lankan for whom the moment had personal significance.

His name is Indika Gallage, and last century he and Dilshan shared an international debut.

The year was 1999. Sri Lanka had just completed a historic series win over Australia. Gallage and Dilshan had both played against the Australians in tour games that year - in one match Michael Slater was caught Dilshan bowled Gallage - but neither of the Sri Lankans was called on to play in a Test.

The following month, the Sri Lankans headed to Zimbabwe without Aravinda de Silva, who withdrew for personal reasons, nor Arjuna Ranatunga, who was not selected. And when fast bowler Nuwan Zoysa was ruled out of the first Test, in Bulawayo, due to illness, it meant three men would make their Test debuts: Dilshan, Gallage and Indika de Saram.

Bulawayo would be his solitary Test cap. He felt he bowled well there, albeit without taking a wicket, but by the second Test, in Harare, Zoysa was well enough to resume his place in the side and duly claimed a hat-trick with his first three deliveries, in the second over of the match. Zoysa missed the third Test with a groin strain, but Ravindra Pushpakumara was preferred there to Gallage.

"I bowled well in my last one-dayer, nine overs, 42 for two wickets. I don't know why I didn't get picked again"

But Gallage remains the 81st man to play Test cricket for Sri Lanka, and hanging on a shelf of cricket trophies and memorabilia in his Melbourne home is his Sri Lanka Test cap. A right-arm fast-medium bowler who was good enough to claim 293 first-class wickets at 22.19 in a 113-match career, Gallage still plays the game, although now he's perhaps more medium than fast-medium.

He will turn 41 in November, but looks younger than his age. He is about to enter his 11th consecutive season with the Sunshine Druids Cricket Club in Melbourne, and hopes there are a couple more years left in him. He smiles when asked if he still loves cricket.

He remains in touch with Dilshan, who is a year younger. It frustrates Gallage to see a player such as Dilshan moved on from international cricket to make room for younger men. After Dilshan's last ODI, in Dambulla in August, he was replaced by the 18-year-old opener Avishka Fernando, who had not played so much as a single first-class or List A game.

By the time of his Test debut, Gallage himself had played 55 first-class matches. He did his chances of selection for the Bulawayo Test a world of good by claiming 6 for 60 in a tour match against the Zimbabwe Cricket Union President's XI. At a team meeting in the lead-up to the Test, Gallage was told he was in the XI, and he later received his cap from the captain, Sanath Jayasuriya.

But in the first innings of the Test, Gallage bowled 14 overs for 53 without a wicket, and in the second innings he took 0 for 24 off 11 overs. Chaminda Vaas and Muttiah Muralitharan did the bulk of the bowling, and Pramodya Wickramasinghe took the lion's share of the wickets. "I had the performances in first-class cricket and in the three-day [tour] game," Gallage says. "I bowled well in the Test but didn't get a wicket. Then I didn't get picked for the second Test. It was my one chance, that's it. It was almost the same in one-dayers. I played my first one-dayer in Zimbabwe, in Harare. I did well. Then two games in New Zealand, then never got picked again.

"I bowled well in my last one-dayer - nine overs, 42 for two wickets. I don't know why I didn't get picked again. In my first game in New Zealand I bowled seven overs, thirty-something for one wicket. I got Nathan Astle out. Then in my last game, I got [Adam] Parore and [Craig] Spearman out. Then I don't know what happened."

What happened was that Gallage's international career was over, and he ended up signing a contract to play league cricket in England. Then he joined Sunshine Druids and moved with his wife and young daughter to Melbourne. Eleven years and two more children later - his two sons were born in Australia - Gallage is still in Melbourne. He has permanent residency, and intends to stay.

He remains in touch with some of his former team-mates, men like Zoysa and Rangana Herath, as well as Dilshan. But he is far from alone in Melbourne, which is now home to numerous former Sri Lanka cricketers. The likes of Asanka Gurusinha, Ravi Ratnayeke and Saliya Ahangama have lived in Melbourne for decades, but others such as Chanaka Welegedara, Rumesh Ratnayake and Dulip Liyanage are more relatively recent arrivals.

"It's a good country," Gallage says of Australia. "Now I work as a forklift driver full-time, part-time cricketer... but I have still got the Test cap." 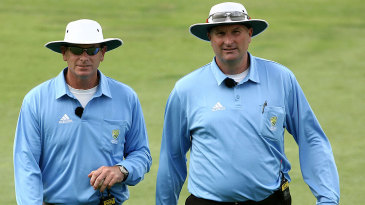