Tea pout: Glenn McGrath didn't have many poor days on the field but he often looked like he did

The pains of Pidge

Did Glenn McGrath ever have bad days? He did - at least five, in fact

v West Indies, May 2003
Glenn McGrath was often in a flap with head-shaking curses, but on day four at the Antigua Recreation Ground he was off the Pigeon scale. His wife, Jane, was suffering with cancer back home and a grumpy McGrath was at the other end of the world, watching a Test match slip away. So he sledged Ramnaresh Sarwan, asking in rather graphic terms about his relationship with Brian Lara. Sarwan's reply took in McGrath's wife, apparently unaware of the seriousness of her condition. McGrath simmered, calling in umpire Srinivas Venkataraghavan as he collected his cap, and the argument appeared settled. But in between overs something snapped and McGrath had a meltdown of tired-toddler proportions. He strode towards Sarwan, pointing and shouting: "If you ****ing mention my wife again, I'll ****ing rip your ****ing throat out." 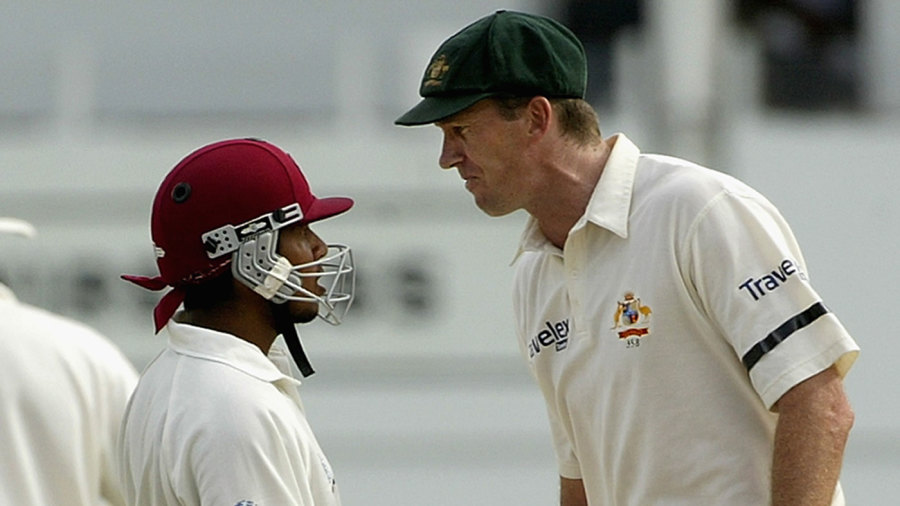 Surprisingly, the yelling did not gain the frown of the match referee, but the reaction in Australia was severe. Critics complained it was another example of the ugly Australians under Steve Waugh's captaincy, especially when they were losing. West Indies won the Test, with Sarwan's century helping West Indies in their record chase of 418. A couple of days after the match McGrath reflected on how he had been trying to remain calmer on the field. "It's something that I have worked on quite a bit, especially since becoming a father," he said. "I am a little bit disappointed in myself that I did do it."

v England, November 1994
Even masters don't always find things easy in the beginning. McGrath had been dropped after his first Test against New Zealand a year earlier and after going wicketless in the opening Ashes encounter, was cut again. Then a skinny 24-year-old, he was still trying to hone the consistency that would take him towards all-time greatness. Steve Waugh, who would later captain McGrath during an all-conquering reign, noticed the early insecurity. In his autobiography Waugh said McGrath "struggled to feel comfortable until enough faith in his potential was shown by the selectors". The chairman, Laurie Sawle, and his panel were certainly not convinced of McGrath's powers when he faced England for the first time at the Gabba. There were no breakthroughs in his 29 overs across the match, although it was a little tricky to organise a decent look at the batsmen with Shane Warne capturing 11 victims in the 184-run triumph. Still, this was the first of only five times in 124 Tests that McGrath did not take a wicket - and the one occasion when the punishment was the axe. After being 12th man for three games, McGrath had learned his lesson and England never saw him as an easy target again. In the final Test, in Perth, he dismissed the captain Michael Atherton in both innings, initiating a hex that would end with 19 dismissals in 17 matches. Those six wickets at the WACA were also the first of 157 against the old enemy.

v England, August 2005
Never has a stray ball caused so much pain. McGrath's slip and twist of an ankle at Edgbaston really turned Ashes history. Australia were leading the series after their 239-run walkover in the opening Test at Lord's and it seemed the contest would follow the same striking pattern as over the previous 16 years. Ricky Ponting's squad arrived at the ground half an hour earlier than expected, leaving the players to mess about on the outfield before the formal warm-up. A rugby ball was picked up and the reserve wicketkeeper, Brad Haddin, started passing it to McGrath. All normal so far. But Haddin then threw one that bounced in front of McGrath and went past him. He turned to pick it up but did not see a cricket ball that had been placed on the ground by an Australian coach in preparation for throwing drills. After one false step, McGrath was on the ground with a sharp pain. "I'm in a bad way here," he thought, before a scan confirmed a ligament tear in his right ankle. To continue the chaos, Ponting won the toss and sent England in. By the end of the day the relieved hosts were 407, having rattled along at more than five an over. On the final morning, McGrath's replacement, Michael Kasprowicz, was last man out, giving a buoyant and disbelieving England victory by two runs. Australia's limp remained throughout the rest of the series.

v Sri Lanka, January 1996
Few line-ups were able to shake McGrath from his suffocating control for long but the Sri Lankans, turbo-charged by the tiny Romesh Kaluwitharana, managed it during a volatile tri-series. Tall and precise, McGrath struggled against agile and innovative opponents, who were in the process of transforming from international minnows to World Cup winners. It was a spiteful summer, starting with Muttiah Muralitharan being called for throwing in the Boxing Day Test, and finishing with the squads not shaking hands when Australia won the one-day tournament at the SCG. McGrath was involved with ball and lip, including during the embarrassment of suffering the worst bowling figures in Australia's limited-overs history at the time. Kaluwitharana had been providing a dose of rocket power since being promoted to open, and in the final preliminary match at the MCG he locked on to McGrath.

McGrath removed Sanath Jayasuriya early but he was blasted for 76 in 9.4 overs, with Kaluwitharana responsible for much of the damage. Metronome who: McGrath once held the worst figures for an Australian bowler in ODIs © Getty Images

Robert Craddock, writing in the Courier Mail, said it was "Cyclone Kaluwitharana" who "sucked up McGrath" and "tossed him back to earth". So strong was Kaluwitharana's hitting during the series that the captain, Mark Taylor, said Australia's bowlers were "probably" intimidated by it. Kaluwitharana's 74 off 68 deliveries pushed Sri Lanka to their second win of the series over Australia, and signalled their rise ahead of their imminent World Cup success. For McGrath, these figures would remain his worst in coloured clothes.

Delhi Daredevils, IPL, 2009
The IPL arrived too late for McGrath, who only just made it on the T20 ride at all. While he had performed in the inaugural, light-hearted international bow of the format, in New Zealand in 2005, he quickly re-focused on extending his career in the more traditional arenas. When the IPL exploded onto the scene, McGrath had already been retired for a year, a three-time World Cup winner happily relaxing in front of the fire. But when Delhi Daredevils waved their auction paddle for the relatively modest price of US$350,000, he was headed back to India like a parent stumbling into a teenage rave. Initially it was a riot - he popped 14 wickets in 12 games of a successful opening campaign - but then it became, like, totes ridiculous. Excess baggage: past his prime, McGrath (second from left) had to deal with being benched in the IPL Tom Shaw / © Getty Images

Aged 39, one of the world's greatest fast bowlers suffered the humiliation of not being picked at all in the second season. "It has been hard to be a part of the bench, and I was hoping for a game during the league stage," he wrote in his Hindustan Times column. Fitness was listed as a significant issue, but in reality the game had grown beyond him. Instead of dominating the contest, he was forced to watch younger mortals such as Dirk Nannes, Ashish Nehra, Pradeep Sangwan and Aavishkar Salvi fill his place. After a couple of low-key appearances in the Champions League Twenty20, he returned to Australia and slid back into a much more dignified retirement. Think You Know Yourself?

Glenn McGrath deals with the questions in our quiz in efficient, metronomic fashion Glenn McGrath talks about the method behind his metronomic consistency, visualisation, and why aggression isn't about sledging The summer everything changed