'I was shocked when I first got picked for New Zealand'

Debbie Hockley talks about her 21-year New Zealand career, the joys of club cricket, and winning a World Cup final on the third attempt Hockley bats during her 79 in the World Cup final in 1997: "There's always been a huge rivalry with Australia. There always will be" © Getty Images

There was a New Zealand women's cricketer - Ethna Rouse - in my neighbourhood, growing up. She put up a notice saying the local club was looking for players. That's how I started out.

Batting has developed most of the three disciplines in women's cricket. With the advent of T20 cricket, women have had the licence to play more aggressively and inventively.

Jeanette Brittin and Martin Crowe were my favourite players when I was young. Both were very elegant. I liked that.

When I was inducted into the ICC Hall of Fame, my parents were flown out to Sydney as well, and they got to be treated like royalty. Business-class flights, rooms at the Intercontinental - all of that. I'm grateful they shared in that, because they were wonderful support from when I first started, right through until my final game, when we won the World Cup final.

Talking about my career takes about five years. It spanned such a long period of time.

"When I reflect on my first stint as New Zealand captain, I wasn't a good communicator at that age. I was 21"

Only playing ODI cricket is pretty one-dimensional, isn't it? For a long time, that was the diet for women, because not many Tests were played. T20s have forced females to look at their shot ranges. Now they'll look at standing at different places in the crease as well. That can only have been a good thing.

I was shocked when I first got picked for New Zealand. I was only 15, and I had no idea why they had put me on the team. On that first tour to Australia - that's when I really knew I loved cricket.

We got to the 1993 World Cup a week early, which meant our own association had to fund that part of the trip. We tried to be quite thrifty. The whole team took our own bags onto the London train, to get to the ground we were playing at. You'll never see that now.

The local rugby club had a fundraising dance to give me money for my first trip with the New Zealand team. The people on my street had a little party and they gave me a travelling bag.

I had such a good grounding in club cricket because there were four New Zealand cricketers in my club when I began. They had beaten Australia in the 1972-73 series. Gosh, I was lucky.

My mother's brothers flew her to London so she could watch the 1993 final. It was awesome, apart from the fact that we lost that game. I tried not to hold it against her all these years. She and Dad did see us win it in 2000, though. If we had never won, I'd probably have felt she was a bad-luck charm. Thank goodness we managed to win when she was present! 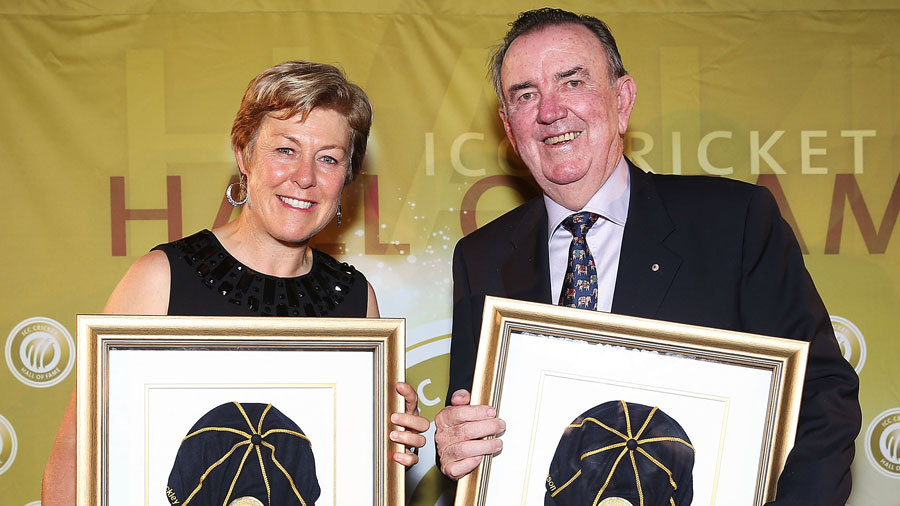 "When I was inducted into the ICC Hall of Fame, my parents were flown out to Sydney as well, and they got to be treated like royalty" © Getty Images

I asked Nathan Astle about constructing innings as an opener, when I began consistently opening after 1990. I had talked to a few other Black Caps about how they go about playing particular kinds of bowlers as well.

When I reflect on my first stint as New Zealand captain, I wasn't a good communicator at that age. I was 21.

I think I was the last person to get into the huddle when we won the World Cup [2000]. It was a last-over win, and the sense of relief was just more than I could describe. I just sat down near the long-on boundary.

I never played against West Indies or South Africa. The rise of the traditionally not-so-strong teams since I've retired has been fantastic. Pakistan and probably Sri Lanka can be added to that as well. So many more players have the opportunity to make a career out of cricket.

At Lord's, I got a bottle of bubbly wine off the drinks trolley and sprayed it out over the balcony after everyone had left. It was after a match in 1996, and I knew I'd never be there again. I just wanted to know what it felt like.

"Batting has developed most of the three disciplines in women's cricket"

Once, in India, the ground staff basically ironed the pitch. They had hot ashes in a metal tray, and then put that right on the pitch to dry it out, ahead of a World Cup match. I was fascinated.

Chris Cairns introduced me to the paddle shot. It scored me quite a lot of runs in India in 1997. Then in the 2000 World Cup - which was probably my poorest tournament - the paddle got me most of my runs. It was a shot I hadn't played for most of my career, but it was really annoying to bowlers.

We were the first team to make it to two consecutive World Cup finals and lose. When we got to the third final, in 2000, it was a thrill - but boy, there's no way you want to lose three in a row, believe me.

It seemed to be a common thing in India that if you scored the most runs, you won player of the match. I was player of the match in the 1997 World Cup final, but that was very, very bittersweet. There's not much celebrating to be done when you've lost.

There's always been a huge rivalry with Australia. There always will be. They might have had the upper hand on a lot of occasions. "Once, in India, the ground staff basically ironed the pitch. They had hot ashes in a metal tray, and then put that right on the pitch to dry it out. I was fascinated" © Getty Images

I would have liked to sit in the changing room and chat with my mates all night, after my last game, when we won the World Cup. Unfortunately we had a closing dinner to go to.

The club scene hasn't been so good for women's cricket in the last decade. It was strong when I started.

I think I played the best cricket of my life on the 1996 tour of England. I was just in the zone with my batting. I didn't get out for under 50. I had one 41 not out in the second innings of the Test at Guildford, but I was really ill while playing that innings, so that's my excuse.

The noise of the Kolkata crowd in the 1997 final was like being next to a jet engine. They had invited busloads of schoolgirls and schoolboys to watch it.

Some of the happiest times of my career came while playing for my club. You can talk a lot about playing for New Zealand, but I have wonderful memories of being in the Lancaster Park Club rooms in Christchurch. There wasn't as much pressure as playing for representative teams. Maybe all of the people in your team are more relaxed.

I'm hopeful we'll see more women in governance positions throughout New Zealand cricket - whether it be at the NZC level, or district association level. Growing the female involvement would be great. That can be either as players, supporters, or helping with the running of clubs. The danger period - where we are losing people - seems to be when they leave high school. Maybe nowadays youngsters aren't willing to spend the time that cricket takes up.

Determined - that's how I'd describe my batting in one word.

I refined my technique throughout my career. Towards the end, I worked hard on the biomechanical side - making opposite movements at the crease to keep me balanced, and have everything working efficiently. I had a lot of power in my shots, but the timing was better as well.

You get to see so many things on one Indian street. I don't know where else you would see cows walking across, with tuk tuks, and buses, and motorbikes that have entire families on them, or cycles that have six feet of baskets on the back. I loved my two trips there. I got to see how other people in the world just went about their lives.