Is there someone at the other end? Does it matter?

Cricket is an almost endlessly adaptable game. You can play it almost anywhere (and I have). In office corridors, on mountaintops or meadows, on beaches or in crowded gallis. No matter how confined the space, or how apparently inhospitable, cricket contains the resources to deliver a game that remains, recognisably, itself. Sure, the entire leg side may be off limits, or no stroke beyond the most restricted forward defence may be possible, but it's still cricket and you can still play it.

All these variants, however, rely on one basic assumption: there are at least two of you. Everything else can be worked around, but you need one to bat and one to bowl.

To the real lover of cricket, as opposed to the mere dilettante who contents himself with only playing in company, this is a significant limitation. There aren't always two of you. More frustrating still, even when there are, people make petty and specious objections when you propose playing cricket - things like, "I can't, I'm performing brain surgery", or "Maybe after sex, instead of during?"

I used to try to reason them into sense. But people are strange, curiously immune to my powers of persuasion, unwilling to change their minds despite being presented with conclusive arguments. It's yet another manifestation, I think, of this post-truth world everyone talks about. But what can you do? Sometimes life just gives you lemons, and instead of whining, the best thing to do is spin one against the flat of your palm three or four times, walk a few steps then explode into a powerful jump and hurl that lemon into the air, the arc describing a perfect parabola until that last vicious dip onto the perfect length, luring the batsman forward only to rip past the edge, a sudden rich aroma of citrus filling your senses…

People make petty and specious objections when you propose playing cricket. Things like, "Maybe after sex, instead of during?"

Sorry, I got a bit carried away. Where was I? Oh yes. Hell is other people who won't play cricket with you. There are ways of making hell better. Ways, in short, of playing cricket when no one will play it with you.

Book cricket
I believe every Indian schoolboy knows this game. It was handed down to me by my father, and if we calculate riches, as perhaps we should, in terms of hours of absorbed happiness, it may well be the most generous part of my inheritance.

You need a book, a pen and paper. Write down your two teams, in batting order. Then open the book at random. Any page ending with the number two is two runs, and so with four and six. Eight is a dot (when you get one, it's sometimes fun to clap your hands and say, "String those dots together, fellas"). Nine is one run. Zero is out. Fifteen-run overs with a wicket were common, which as a boy I found unrealistic. But with T20, even that problem has disappeared. If anything, the scoring rates are a little on the low side.

Car cricket
John Spencer, hallowed be his name, introduced me to this when he drove the school team through south-east England to cricket matches. Sheep are a single each (and not to be sniffed at - a good flock can take you up to 50 in a single blow). Cows are four, pigs six, and horses out. Adapt to suit the environment you are in. For example, in Berlin one might play the following game: Beards and tattoos are singles. People carrying vinyl, two. Someone in a suit, four. A political conservative, six. Overhearing an American or English accent, out.

Innings can be quite short in Berlin. All dressed up and no game to play? Improvisation is your friend © Getty Images

Air cricket
This is the purest form of the game, I think, because it doesn't require any equipment. I would advise starting modestly. When you're on the tube in rush hour, jerk your head to sway out of the line of a bouncer. Don't attempt anything more expansive, because a cover drive in a crowded compartment runs the risk of upsetting someone. Just play yourself in, twitching shoulders in between deliveries, widening your eyes, preparing for the next bouncer.

As you get your eye in, you can slowly broaden your range. The little tuck off the hips to get off strike - just cock your left wrist backwards (if you are a right-hander), and then at the last moment flick it left. Remember, even leg-side shots should be played with a straight bat, so keep your wrist facing the bowler for as long as possible. The dab to third man is also useful here, but requires two hands. Your top hand is on the handle, the bottom simulates the blade of the bat. You want to flatten out your elbow, tilt the top wrist to the right, opening out your bottom palm horizontally to guide the ball. If you're feeling your oats, a little flourish can be added at the last moment, the bat wiggling in a Pujara-esque manner.

As you go further in the game, you can start involving other people. The leave is the place to start. Walking down the street with cars to your right is the ideal situation to practise knowing where your off stump is. Leave with a flourish, bat lifted high above your head. Or, more ambitiously, you could start leaving people. As they walk past you, go right forward to the pitch, and leave. Sometimes you might just want to drop your hands and give them a little nod, acknowledging a good delivery.

Wall cricket This is the one I'm fondest of, because I came to it all on my own. I'm sure other people have played it, but I invented it for myself rather than learn it from someone.

In Berlin one might play the following game: Beards and tattoos are singles. People carrying vinyl, two. Someone in a suit, four. A political conservative, six

You need a wall and an uninterrupted strip of space facing it. In the simplest version, you throw a ball at the wall with your right hand (again, if right-handed), while holding the bat in your left hand (this is also excellent for practising top-hand dominant technique). When the ball bounces back, you hit it.

This can keep you happy for hours. But it's only the start. I could have made the entire letter about the various ways one can develop this game, but as it is, I'll have to restrict myself to a few suggestions.

It helps, I found, to play competitively. Two teams, whichever happen to strike your fancy at that moment. Being an artistic and sensitive youngster, I once played an entire County Championship season. This requires scorecards (handwritten, in those pre-computer days).

Your enjoyment is much enhanced if you add a soundtrack. As you play, commentate in the voices and accents of your favourite commentators. Extra points if you manage to have a vigorous argument. 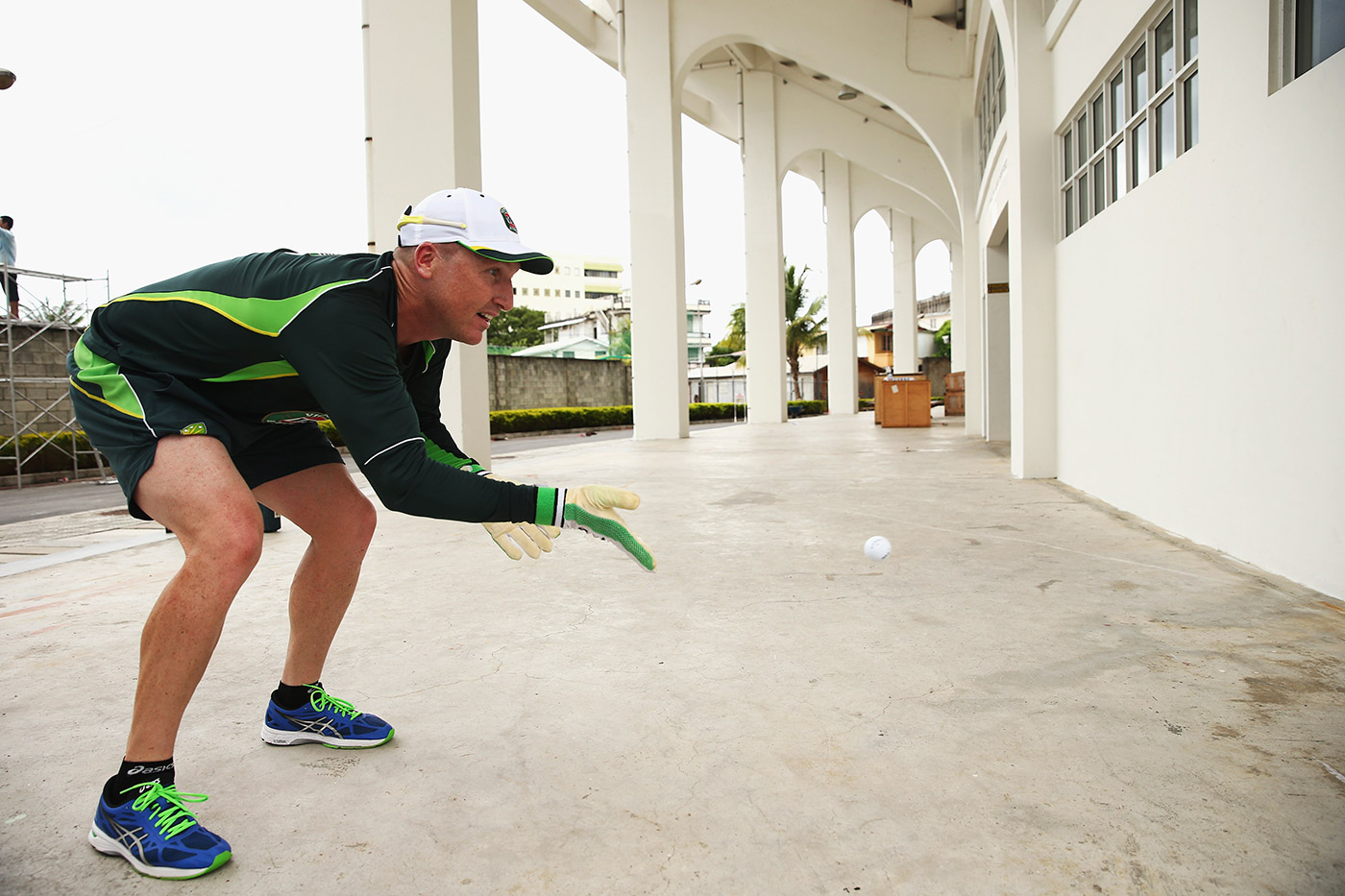 You need a bat in your other hand, lad © Getty Images

Different balls are good to simulate different conditions. When I took on Ambrose and Walsh, the rubber ball was essential. As the pitch flattens out, you can switch to tennis balls. Tennis balls in different states of repair are helpful.

Don't throw away old carpets. You know the lumps that disfigure a previously pristine rug? Perfect for a raging bunsen.

Where possible, try not to break the light fittings. If you do break them, attempt a more convincing lie than "I don't know what happened, it just fell down." Maybe I have an especially sharp mother, but she didn't buy that even once.

However. Sometimes… sometimes it's the last ball of the World Cup final, India are nine down against Pakistan, the young debutant (Pranay Sanklecha, in case you were wondering) is on strike and on 94. India need six to win. Wasim Akram is steaming in, the stadium is hushed, filled with that rapt silence that bespeaks greater excitement than the most feverish chanting.

Your enjoyment is much enhanced if, as you play, you commentate in the voices and accents of your favourite commentators. Extra points if you manage to have a vigorous argument.

You look around the field, sizing up your options. Third man and fine leg are up, he's not going to bowl short. Deep midwicket, long-on. Deep cover. Mid-off is up.

Benaud softly mentions the remarkable composure of the young man.

A six over long-off is where the tube light is. You broke its predecessor two days ago. You wipe sweat off your brow. Nod to Venkatapathy Raju, standing on his bat at the non-striker's end.

It just fell out, Mum. 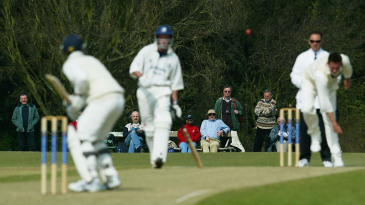 This one time when I played first-class cricket

Facing professional fast bowling, even if it's not extreme pace, can be a daunting and thrilling experience 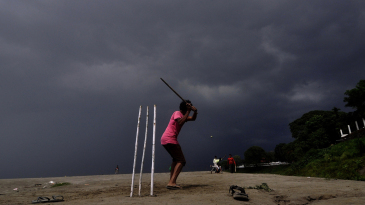