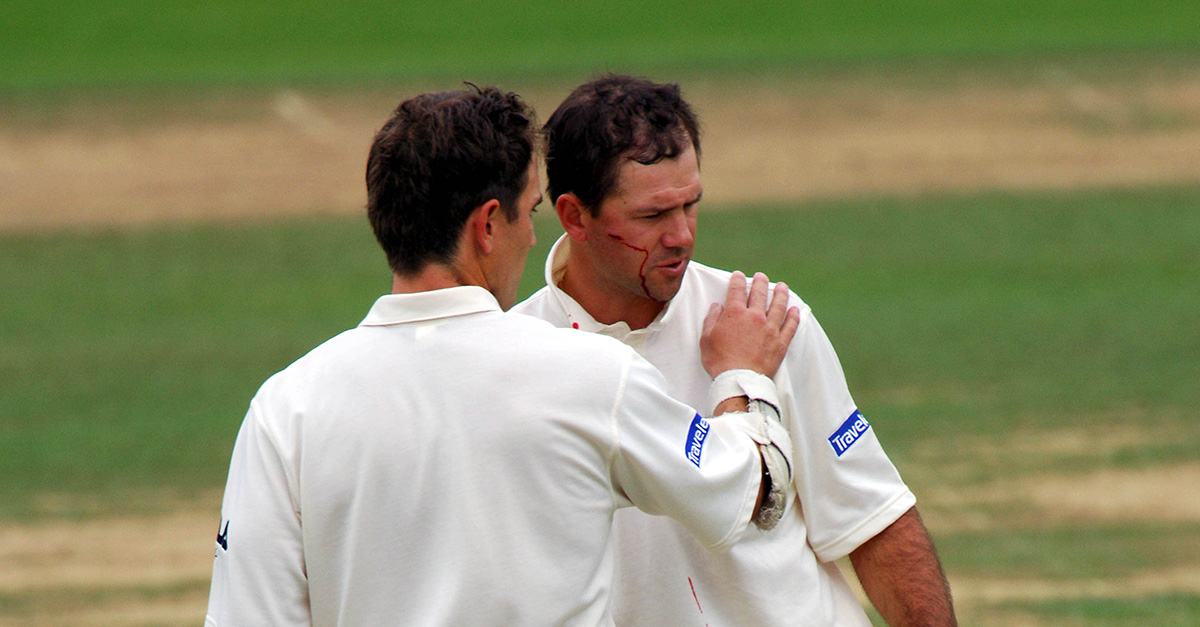 The first cut is the deepest: Harmison drew blood early at Lord's in 2005

The statement of intent
Steve Harmison to Ricky Ponting
Lord's, 2005
If ever you should find yourself trying to explain to heretics, ignoramuses or our new galactic overlords why cricket isn't an unfathomably tedious snoozefest, then a good place to start would be with a YouTube compilation of bouncers (ideally, with the sound down and the comments disabled), the visceral, adrenaline-thrumming appeal of which should help dispel any notions of the game's cucumbery effeteness. The game is dangerous, and despite the tragic death of Phillip Hughes and the soul-searching it prompted, it's all the better for it.

The thing with a bouncer is that its "meaning" isn't confined to that delivery alone, that solitary dot in the scorebook or gloved single to a vacant leg gully. It works just as well when it isn't bowled as when it is, its threat - implied or expressed - designed to reverberate along a chain of deliveries: an over, a spell, a match, a series, maybe longer.

And so it was at Lord's on the opening morning of the 2005 Ashes, a time when there still were Englishfolk of legal drinking age who had not known victory over the Aussies. David badly needed to load up his slingshot and notify the baggy-green Goliaths that the previous eight series meant nothing; that they would be coming at them, and hard. Step forward Steve Harmison for rather the better of his contrasting diptych of tone-setting Ashes opening salvos.

First - bosh! - Justin Langer, one of cricket's more pugnaciously competitive souls, cops one just above the elbow. Next - kerpow! - "Haydos" wears one on the scone. Third - klonk! - the fabled "Punter" Ponting, greatest hooker and puller of the age, has one climb sharply at him, snaking back down the slope, before crashing into his grille. There's claret, but not even a trickle of sympathy. Ponting being physically scarred might be the exact moment England's mental scarring finally healed. Sure, they will be routed by McGrath the Merciless and lose by plenty, but this bouncer said things were going to be different. And everyone knew it. Eat this: Walsh gets stuck into Smith later in the match in Antigua where he cracked Smith's jaw Patrick Eagar / © Getty Images

The barrage
Courtney Walsh to Robin Smith
Antigua, 1990
The tradition of Jamaican pacemen terrorising teak-tough England batsmen had long been consecrated by MA Holding during that famously ferocious assault on Brian Close on a dicky Old Trafford pitch in 1976 (the old man didn't grovel but he did return to the dressing rooms looking like a Rorschach Test). Among its most memorably gruesome iterations was Walsh's spell to Smith in Antigua during England's first ever overseas Test series to be televised live.

Much as the dawn of colour TV would sear the 1970 Brazilians' samba football into the collective consciousness, here England's supporters suddenly became palpably aware of the Technicolor violence of cricket in the Caribbean.

Astonishingly England won the first Test, in Jamaica. A rain-affected draw, an abandoned match, and a home win in Barbados meant the teams headed to Antigua for a do-or-die decider. Time to tickle some trauma. Cue Walsh, not far into a long and willing career of dead-eyed enforcement, for which he was both physiologically and temperamentally equipped (just business, man), and on the first afternoon he needed no second invitation to tear into Robin Smith, who had batted for almost ten hours at the Kensington Oval.

Smith ducked and swayed and hopped through the onslaught until the penultimate ball before the tea interval, which emerged from Walsh's angular, gangly action, arms crossing each other like a man doing air traffic control in high winds, then climbed from the docile pitch, jagged back sharply, and thwacked into Smith's unprotected jaw, which immediately started to swell. A posse of concerned fielders surrounded Smith, who was hardly the type to let a broken jaw disturb his bubble. Satisfied the batsman's fettle was fine, Walsh loped to his mark, hurtled in again, and signed off with another vicious bouncer. The crowd erupted. Smith grinned. Walsh didn't. This was Guantánamo Bay cricket, and they weren't quite done with him yet. The loosener
Devon Malcolm to Gary Kirsten
The Oval, 1994
More than a few fast bowlers have felt that the best way to get a stiff body cranked up was to bang one into the middle of the pitch first up and take things from there. The batsman probably won't expect it, and in any case will be unlikely to take on the hook shot on the basis that you need to have a look at one. Very few of these balls carry real menace. It's shadow-boxing.

Not at The Oval in 1994, it wasn't. This was full-frontal attack from the first bell.

You know the backstory: a Fanie de Villiers bumper - perhaps in revenge for Malcolm having hospitalised Jonty Rhodes - knocked the England badge off his lid, leading to the perhaps apocryphal retort, "You guys are history." Talk having been talked, walk was then duly walked, to the tune of the eighth-best innings figures in Test history. Big Dev, whose wonky radar so routinely disappointed us embattled England supporters, a guerrilla faction desperate for some heavy weaponry to use in our various asymmetrical wars, only to discover that the rocket launcher we'd bought off that dubious Azerbaijani middleman had a few technical glitches. So much of a struggle was it for Dev to find the proverbial half-decent areas that it often seemed he was bowling in a blindfold. Not here, though.

The pitch was white-lightning quick, although Allan Donald had been taken for 30 off two overs the previous evening as Phil DeFreitas and Darren Gough launched a merry counterattack that left the game in the balance. Devon spent the interval in something approaching a trance, then absolutely roared in with the new ball. Gary Kirsten was the unfortunate soul taking strike, and all he could do to the innings' opening delivery - Dev's "loosener" - was jerk his head back like a Hollywood star pretending to take a punch. The ball screamed into the gloves of Steve "Bumpy" Rhodes, standing not far short of Vauxhall Bridge. "I think Devon means business," deadpanned David Gower on commentary. He wasn't wrong.

Kirsten was bounced out two balls later, taking his eye off the ball. Then Uncle Peter panicked, top-edging to long leg, before Hansie Cronje was bowled middle peg - beaten on the outside edge - leaving the Proteas 1 for 3 and Devon smelling blood. The alpha confrontation
Dennis Lillee to Viv Richards
Gillette Cup, Perth, 1976
Lillee liked to say the bouncer should be used as a shock ball, not a stock ball. But what if the only way to truly shock your adversary - the greatest batsman in the world, coming off the back of compiling the most Test runs ever scored in a calendar year - was to use it as a stock ball? Such was the scenario when Western Australia took on a Queensland side featuring Richards in the semi-final of the 1976-77 Gillette Cup - a game so mythical that it spawned a book, The Miracle Match - and Lillee would be compelled by his team-mates' ineptitude and his own 100-proof rage to begin the innings with one of cricket's greatest sequences of I-don't-give-a-shit-who-you-are-mate bumpers.

Rod Marsh later said only one of the four was any good, which slightly missed the point. This was about Lillee's deranged warrior-genius spirit. To bounce the purple-capped maestro first up - albeit high and down the leg side - might have been considered a nod to the notion that you're not going to lie down, even defending 78. The second - better, straighter - still seemed almost comically aggressive: good old Dennis, the mad bastard! By the third - right on the money, nearly taking the Master Blaster's gloves as he was late on the hook - you sensed the atmosphere had changed. It was game most definitely on.

The fourth ball was again banged in, Viv ducking underneath it as though having seen the announcement in that morning's paper. Lillee received a reprimand from the umpire, and offered a cursory apology as he made that brisk, duck-footed walk back, Fremantle Doctor billowing a shirt whose buttons lay largely unused. Two balls later, Viv was bowled - top of off, feet nowhere - and Western Australia would go on to win by 15 runs. 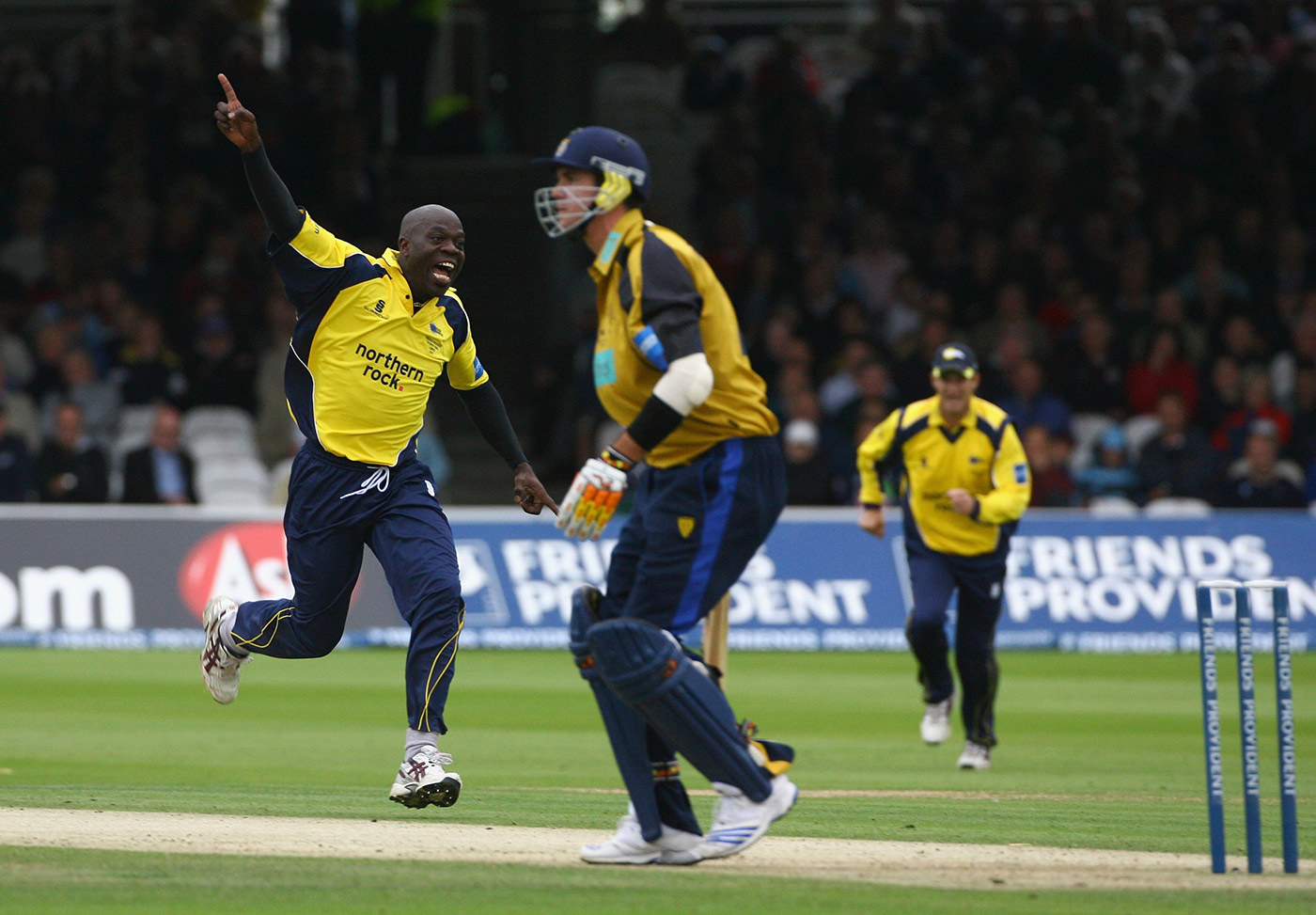 Age ain't nothin' but a number: Gibson gets his man © Getty Images

The ego-pricker
Ottis Gibson to Kevin Pietersen
Friends Provident Trophy final, Lord's, 2007
Some bouncers are less about the ego of a bowler keen to assert his dominance over a cowed batsman, than about a canny bowler exploiting the towering ego of the batsman. For instance: your team has just posted 312 in a Lord's final, and you, their veteran opening bowler, in your final year as a professional, have nicked off Michael Lumb with the first ball of the reply, followed second ball by the identikit dismissal of another leftie, Sean Ervine, who edges to Michael Di Venuto at second slip: 0 for 2 off 0.2 overs.

Into the swelling catastrophe bounds the imposing figure of Pietersen, barely having had time to neck his customary Red Bull. If he isn't yet abuzz, Lord's certainly is. Watching Pietersen attend to his rituals, his knee bends and box adjustments, Gibson stands patiently at the top of his run, wondering what to send down for the hat-trick ball. Attack the poles, right? Or maybe a wide length ball, given the batsman's need to feel bat on ball? What will KP be expecting? Durham pull in a third slip, and let him ponder the reasons.

Finally, the superstar batsman is ready. The 38-year-old journeyman seamer, who five years earlier was playing club cricket, now glides in and bowls - no, you're kidding me - a bouncer! Not even a straight bouncer, either, but a high bouncer, two feet outside off! It's an ego ball, a ball for KP, who, being KP, takes it on - has to take it on - splicing a pull shot just wide of mid-on. It's a ball of left-field genius.

Gibson nailed Pietersen lbw in his fifth over and, at 17 for 3, that was pretty much that. He was named Man of the Match and a few weeks later retired. 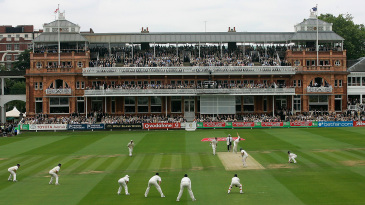 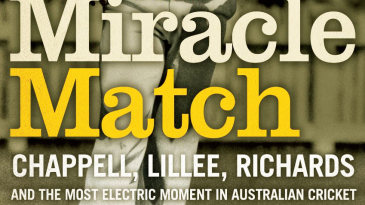 Momentous at the WACA Bruised but not shaken

Famous incidents when batsmen were hit by bouncers