For years I hated cricket. Foisted upon me by my English family in the 1970s, cricket seemed so boring and… bonkers.

I mean, all sports are absurd - punching people, racing animals, kicking, throwing, smashing a ball at posts, sticks, nets - but surely cricket's the oddest? Idiosyncratic laws, impenetrable terminology, interminable hours. So why do we choose it? Or does cricket choose us?

It's something I've been wondering since meeting a polymathic Scot in Adelaide. A sports lover, he's keen (or polite) to learn more. Instead of saving us both, I drag him in. Why?

It took 11 years for cricket to hook me, once I realised its voluminous sillitudes weren't going away. I could already bowl because in backyard games my brother always batted. I'd absorbed the Laws watching dad cordoned off with other cream-clothed giants for days. I admired golden-locked Gower, his batting forever flowing on my grandads' TVs.

So I debuted in my schoolboys' XI - and I loved it. I became my family's most obsessed Thommo: reading cricket books, joining Lancashire CCC, living in the nets. I discovered women's cricket, somehow progressing to England Juniors and county seniors. My parents were thrilled: mum's bottomless cooler box of sandwiches and flapjacks nourished my teams, and dad frequently umpired, even getting knocked out a few times by wayward throws.

I became a coach and a cricket writer. Cricket chose me, but I'd chosen cricket also: for family connectedness and a passport to adventure.

But by 2007, when I moved to Australia, I'd wedged myself into its unforgiving flannels so tightly I was suffocating. Everything was cricket. I tried to leave it behind for sun'n'surf, but it followed me - ESPNcricinfo offered a transfer and, friendless in my new city, I found pop-up mates at the local club.

Yet nothing felt right. Antisocial working hours frustrated me when I wanted to be watching from the Adelaide Oval hill. Playing was different from home: sterile club rooms, rubbish teas, hours passing banterless in the terrific heat. Feeling so disconnected from a sport that was my life was distressing. Did I even love cricket? Or just English cricket? How could it work for me in Australia? Short answer: over the years I minimised official involvement. Now I'm happy with how I experience cricket - spectating or beach-bashing.

And right now, I'm about to explain cricket to a Scot. I'm terrified. What if cricket, my sport, is exposed for the red/white/pink leather-chasing charade it is, or he asks something I don't know?

Too late: the curtains close, we crack a beer and hit the couch. I warn him about this preposterous game invented in a ridiculously rainy country and exported to stupidly scorching nations. Then excitement hits: Australia-Pakistan!

Breathlessly, I explain my love of Tests' meditative rhythms: the soporific ebbs, the electrifying flows. Tension - and release. The historical and geopolitical context straddling the perpetual contextlessness of competition (ongoing suggestions of a two-tiered Test Championship aside). The crowd burr backgrounding the languorous commentary. How conversation flows into the spaces between balls, in rain breaks, when waiting to bat.

The Scot asks insightful questions: "Does Starc's massive wedding ring damage the ball, or does it affect the movement out of his hand?"

How having the right captain is crucial: declarations, taking the new ball, introducing a part-timer to out-psych a set batsman. How, even when trying to escape cricket, cricket is escapism. That's why match-fixing cuts deep; corruption intrudes on fantasy.

The Scot asks insightful questions: "Does Starc's massive wedding ring damage the ball, or does it affect the movement out of his hand?" "How long has fast bowling been two-fingered?" I show him different grips on an old match ball; he wants to try spin. He'd also like the commentary to engage new fans without boring the old ones; more explanation of field changes and more aerial TV angles.

I note Steve Smith bosses the batting averages across all forms when captain; when not, there's a significant drop. "Surely an anomaly?" the Scot says. We discuss how captains across all sports usually sacrifice personal performance under the burden of leadership. This is fun…

Cricket's chosen me, again, and seems it's chosen him, too. He's been reading around it, even watching Tests and T20s solo. The Big Bash is a good entry point. It's helping cricket compete against other sports, against movies, meals, maybe even Christmas dinner. It's how cricket is enjoyed in Australia - crash'n'bash - it's backyard brought onto the front lawn. And, where cricket used to take dads away for days, T20 brings them back, it brings the whole family together: now with female role models, too.

Suddenly I drop the apple I've been absent-mindedly shining on my thigh, shout "Shot!" and jump up to demonstrate how Azhar nailed that cover drive. I mannequin myself where my air bat connects with the imaginary ball. "Balance, poise, timing!" The Scot looks alarmed but maniacally I persist.

"Everyone loves the off side, it's the posh side! But I love shots from midwicket through to mid-on." I mime them through the arc. "Down the track, flick off the legs - magic!" Silence. I panic. Too far?

"By the way," he smiles. "I bought us some Big Bash tickets - it could be fun." This wannabe spinner could be a keeper.

"You know," he adds. "For someone who says cricket is ridiculous, you do love it."

He's right. I know now I'll never escape and I don't want to. Cricket, my crazy darling, fabric of my family and many others, you bind us all in your precious, eccentric tapestry. Cricket, I choose you, now - and always.

Jenny Thompson is a former assistant editor at ESPNcricinfo 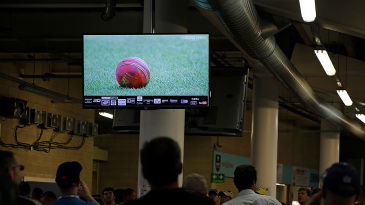