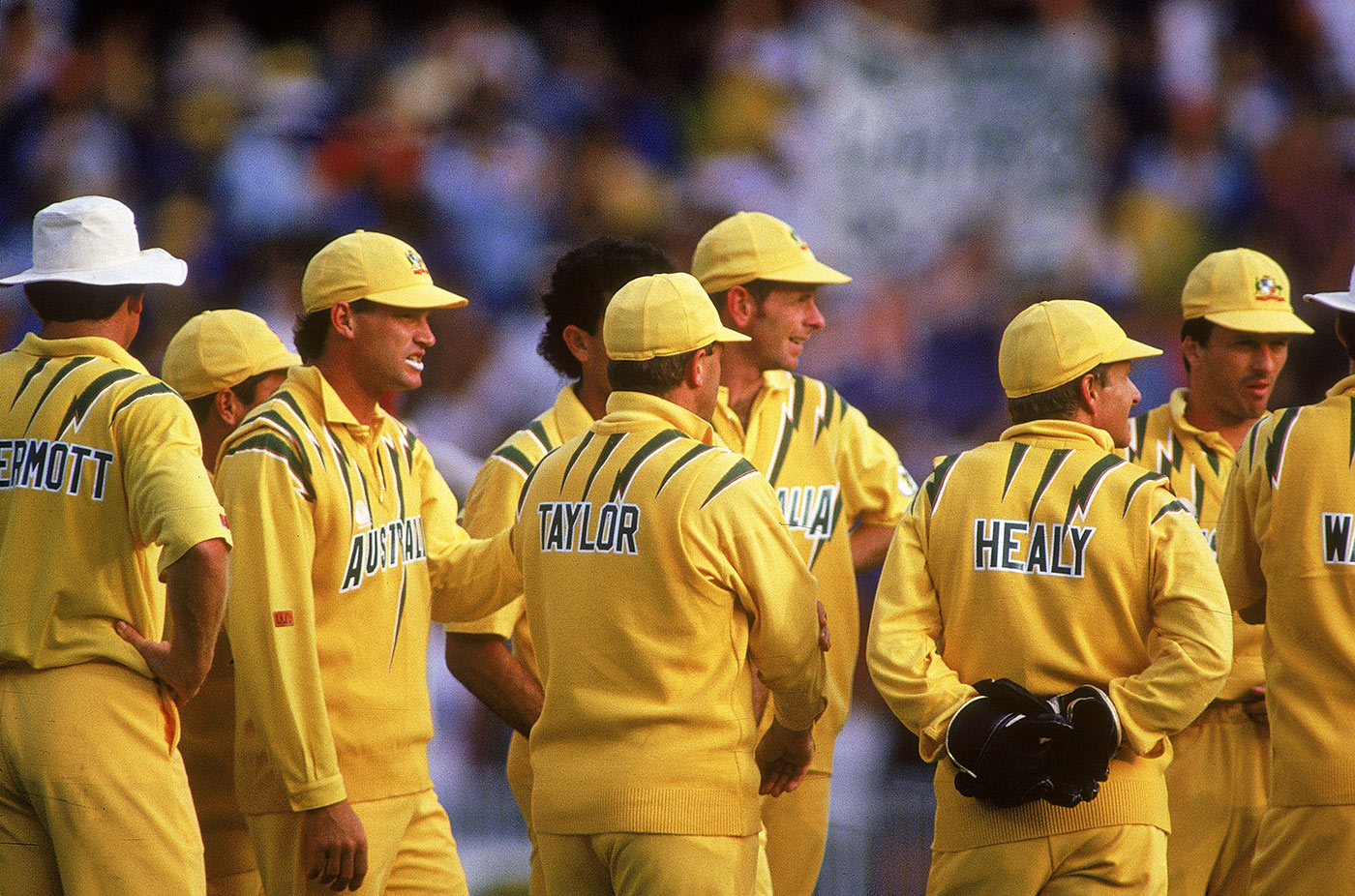 The green, the gold, the great

It started with a casual query on Facebook and quickly descended into a volley of barbs, gibes and bile. No exaggeration, friendships wobbled as I posed a decidedly unimportant question online: "Which are the five greatest ODI shirts worn by Australia in its history?"

And yet, ask people for their views on one-day-international shirts and you'll quickly find opinions more staunch than Geoff Marsh's back-and-across defence at the 1992 World Cup and more passionate than a send-off from an ageing Merv Hughes while playing for Australia A in 1995.

But there were some patterns. Most aimed immediately at the '90s and rarely beyond - though in one case, a vehement defence was mounted for the all-green shirt from 2007. That particular respondent was 17 years old. There was some hipster love for the '80s, and nods to the rugby jerseys for the Benson and Hedges Challenge in 1987 that commemorated Australia's defence of the America's Cup - but mainly, people couldn't get enough of the '90s. 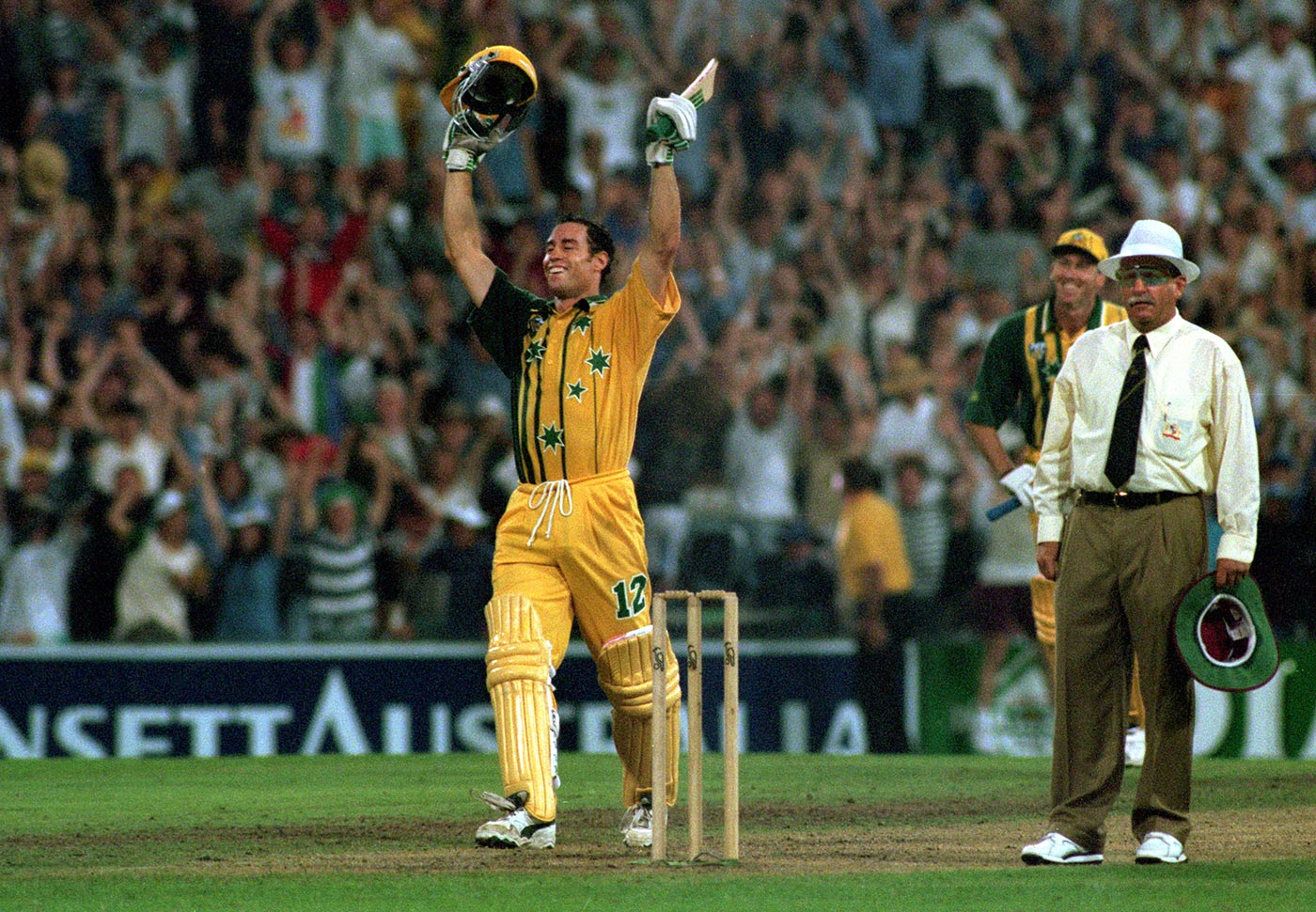 Southern Cross, 1995-96
A great fashion item should immediately transport you to a moment, and Australia's Southern Cross kit of 1995-96 does exactly that. One cannot weigh the meaning of this shirt without reference to that most enduring of ODI moments in Australian cricket: Michael Bevan's last-ball boundary - clobbered, really, from Roger Harper's bowling to an ecstatic SCG crowd. It was the first shirt that encompassed the Southern Cross too, in an era where it wasn't as divisive a cultural signifier as it is now. It was the shirt that corresponded with the consolidation of lasting Australian dominance, and of course, the design matched nicely with Australia's canary-yellow helmet - hugely important criteria in the making of this list.

Classic side panels, 1981-84
Admittedly I was not alive to see this legendary shirt but it is as symbolic of 1980s cricket as any other piece of cricketing clobber. The design is clean and carries no small whiff of the post-disco era. Shirt buttons ran deep, collars ran wide and pants were slightly flared. No list covering the great ODI shirts could ignore the notion of old-school and this shirt, more than any other, captures the old-school vibe. You can feel the gold necklaces jangling against the gold fabric. 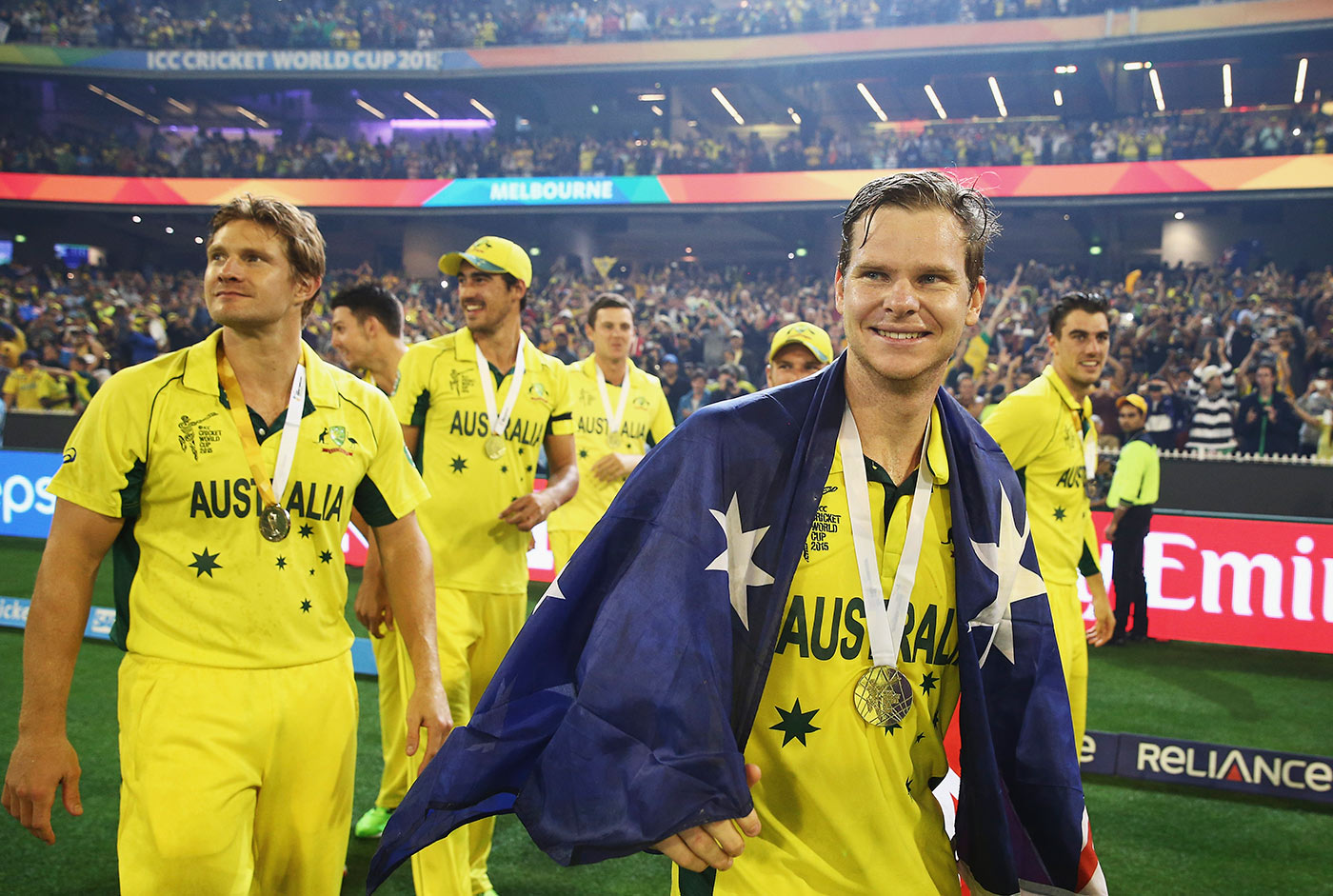 World Cup, 2015
A controversial selection after much fawning for nostalgia, but this really is an excellent shirt. Aside from being an emblem of Australia's ruthless World Cup victory at home, this shirt signalled the long-awaited revival of a gold-dominant kit. With the exception of a dignified side panel of green, it was clean, bright, and will forever carry memories of Mitchell Starc's brutal opening spell in the World Cup final. The players and designers, however, must take blame for not incorporating the canary helmet element. Had they done this, the shirt may have reached an even loftier peak.

World Cup, 1992
There's something about the multi-coloured shoulder panel on this shirt that makes it legendary. Ordinarily I would condemn any use of blue or red on an Australian shirt, but in this case an exception must be made. There is more than an element of selfishness to this choice, as it coincided with my first experience of a World Cup, and my first live international match, aged seven. Whisked out of school before the day had finished, I sat high in the stands as Australia capitulated meekly to England, and I remember Ian Botham bossing things with that unforgettable mullet-moustache combination. Whereas most of one's favourite kits tend to revive memories of glory, Australia were notably very poor in 1992. Even so, there was so much to like. These were among the first shirts you could actually buy, it was the first World Cup under lights, and, of course, Dipak Patel opened the bowling for New Zealand with offspin. 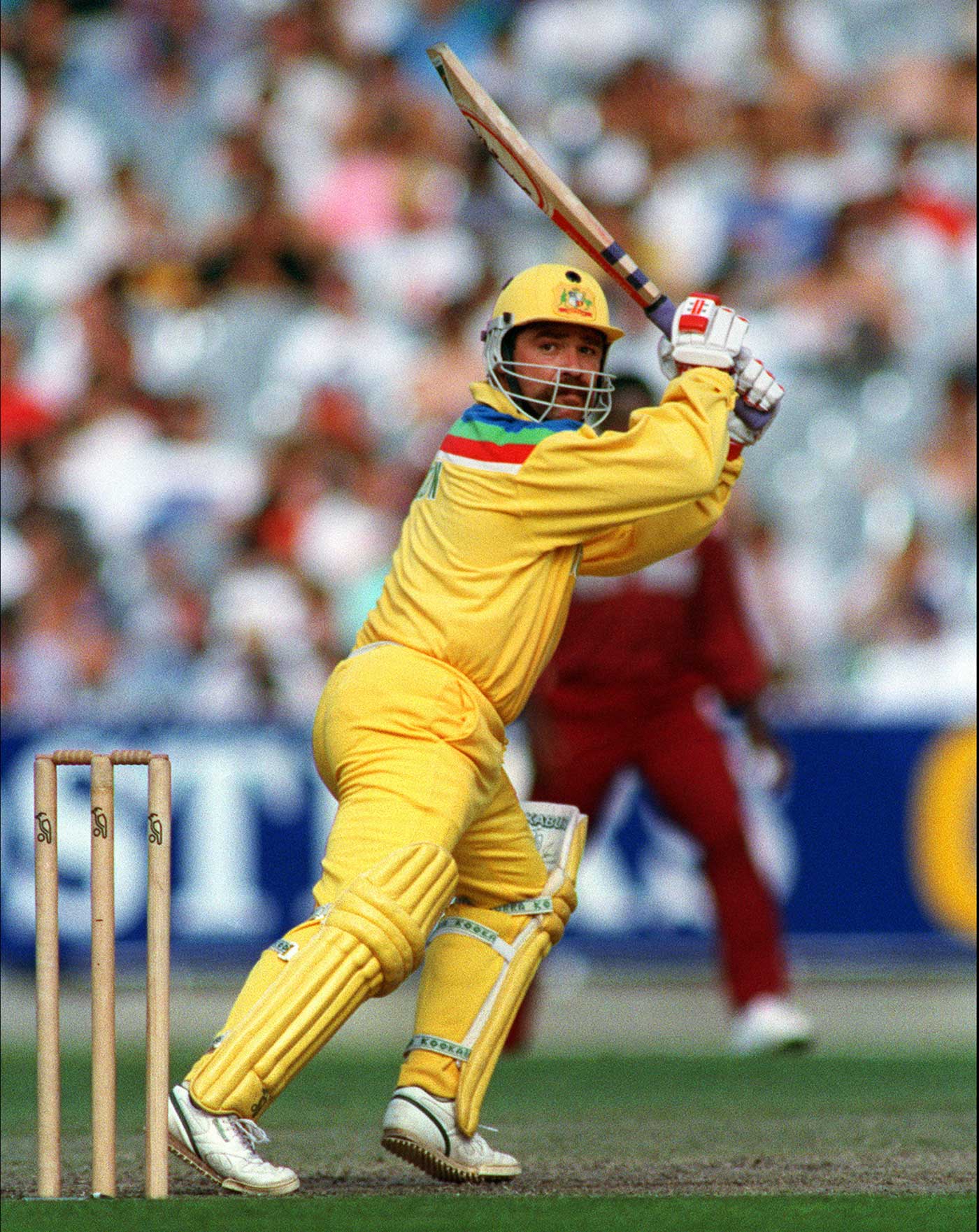 Lightning bolts, 1992-93
How is a cricket-obsessed seven-year-old meant to handle a one-day jersey with lightning bolts on it? The gaudy inclusion of a fearsome weather phenomenon was just about the coolest thing that had happened to this young mind, and it probably remains so. Away from the hubbub of the World Cup, the 1992-93 Benson and Hedges series feels like the essence of ODI cricket at its greatest. Packed crowds, a round-robin format, and an Australia side on the cusp of something special. It was an era when Glenn McGrath bowled with stately venom and Steve Waugh, well, bowled. Mark Waugh's hair was at its spiked finest and Dean Jones carried the fashion gravitas of Marlon Brando in his speed-dealer sunnies. Allan Border was consolidating his status as the godfather of modern Australian cricket, and a young bloke called Shane Warne was dividing opinion over whether legspinners should bowl in limited-overs cricket. Meanwhile, Paul Keating was delivering his famous Redfern speech and David Boon was Australia's batting mainstay.

Somehow summer evenings felt warmer and longer, and everything was a little simpler. To my mind this was one-day cricket at its zenith: flashy enough to provide a fun alternative to Tests, but slow enough to retain cricketing relevance in a world devoid of social media. I doubt there will be a better shirt made. 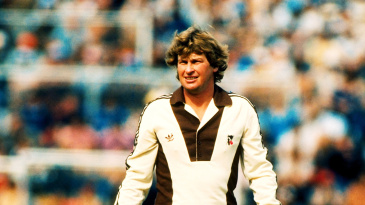 How you're kitted out says a lot about you. Memorable bits of clobber that revealed the most 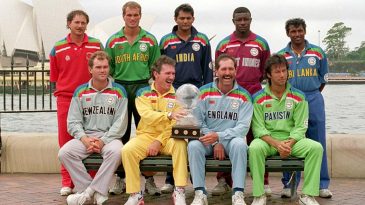 Cricket nerds love team shirts, especially ones from their childhood