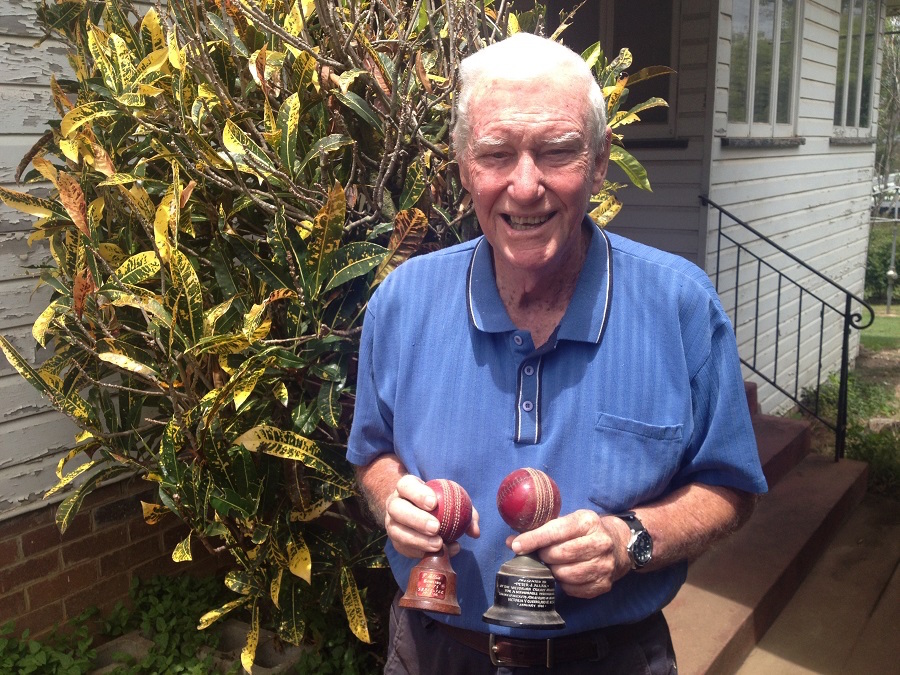 A ten-for in each hand: Peter Allan shows off the cricket balls with which he wreaked havoc © Brydon Coverdale

In March 1966, Frank Sinatra won a Grammy Award for the song "It Was a Very Good Year", in which an old man looks back wistfully on his youth. More than five decades later, and in the autumn of his years, Peter Allan finds himself reflecting, Sinatra-style, on that same summer of 1965-66. And for Allan, it was a very good year indeed.

During that summer of his 30th birthday, Allan made his Test debut. It was not at any old venue, but his home ground, the Gabba. It was not any old Test, but the first one of an Ashes series. And his first wicket was not any old wicket, but England's captain, Mike Smith, bowled.

The next month, Allan did something that only one other man (Tim Wall, in 1933) had achieved in more than 70 years of the Sheffield Shield's existence and which only one other man (Ian Brayshaw in 1967) would achieve in the next 50 years. He took all ten wickets in a Shield innings.

And in March 1966, Allan capped off the summer in remarkable style by taking another ten-wicket haul, this time in Brisbane club cricket. Most bowlers will go through an entire career without a ten-wicket innings at any level; Allan managed it twice within three months.

And yet his name is one that will likely be recognised only by the most ardent Australian cricket fan, and more specifically keen historians of Queensland cricket, for when he retired Allan was the state's all-time leading wicket-taker. Mention Peter Allan to the rest of the country and they'll assume you mean The Boy from Oz.

"In the Shield match just before the first Test, I broke Bobby Simpson's arm. He was out of the Test and Brian Booth actually captained the side in the Test that I played. I wasn't too popular with Bobby!"

Perhaps that is not surprising, for Allan has little contact with cricket these days. Now 81, he lives just a few kilometres from the Gabba, the site of his sole Test appearance, but he never heads down there anymore.

"I honestly couldn't tell you the last time," he says. "It's a lot more comfortable just watching it on TV, although the cream of the commentators have gone. Richie [Benaud], Tony Greig - Phantom [Bill Lawry] only does Melbourne and Sydney."

Not that Allan has always lived a stone's throw from the ground. At one point during his post-cricket career, he bought a pub in the country with his son. And for the last decade of his working life, until his retirement in 2008, he worked as a civil celebrant on tropical Hamilton Island. There, he married nearly 3000 couples, including motorcycle world champion Mick Doohan and his wife Selina, and rugby league legend Gorden Tallis and his wife Christine.

"That to me was just great. No one was sad at a wedding," Allan says. "One Valentine's Day, I did seven weddings in one day. The first one was at eight in the morning and the last one was at eight at night. By the end of the day, I couldn't have told you who I married... I often wonder how many of them are still married."

Allan knows a thing or two about marathon efforts. When he took his 10 for 61 against Victoria at the MCG in 1966, he bowled 15.6 overs, unchanged from start of innings to end. And these were eight-ball overs, thus the equivalent of 21 consecutive six-ball overs - a hell of a workload for a fast bowler. The famous fellow debutant: Doug Walters went on to play 73 more Tests after sharing a debut with Allan © PA Photos

One thing that jumps out from the scorecard of that match is that in the second innings, Allan bowled just 11 out of nearly 90 overs as Victoria turned the match around and secured a win. He took 0 for 63.

As you would be. Still, how did he manage to plough through in that first innings? And how did all ten wickets come his way?

"We won the toss and batted first, and made 180. Then they batted and we had them 4 for 60 overnight," Allan recalls. "I had four wickets, of course. Then we came out on the Saturday morning and knocked them over for 130. Having the overnight break meant I wasn't weary in any way.

"The idea was, I would keep going and we'd put a bloke on at the other end who was just a quick offie. Bobby Crane was his name. He bowled from the Southern end and I bowled from the Northern end. They didn't score many off him, so they tried to make them off me, and they just kept nicking behind the wicket or getting bowled, or whatever."

Simple as that. Ten-for. For Allan, it served as perfect compensation for losing his place in the Test side after his debut less than a month earlier. The previous summer, he had been equal second on the Shield wicket tally, and earned the chance to tour the West Indies with captain Bob Simpson's squad. However, a persistent bout of tonsillitis scuppered his hopes of a debut on that trip.

"The baggy green meant nothing in those days. When we went to the West Indies we got two, and then when I played England here, I got another one. Now they get one and that's it"

Still, Allan was there and thereabouts, and when the home Ashes series came around the next season and strike bowler Graham McKenzie was out injured, he was next in line. Not that the start of his summer had been entirely without drama.

"I was the villain of the piece at the time, because in the Shield match just before the first Test, I broke Bobby Simpson's arm," Allan says. "He was out of the Test and Brian Booth actually captained the side in the Test that I played. I wasn't too popular with Bobby!"

Like many of his era, Allan learnt of his selection via the media.

"It was printed in the paper, that's how I found out - in the Courier Mail. Queensland had four in that Test side: Peter Burge, Wally Grout, Tommy Veivers and myself."

There was no ceremony around the baggy green cap as in modern times.

"The baggy green meant nothing in those days," Allan says. "When we went to the West Indies we got two, and then when I played England here I got another one. They all had the date on them. Now they get one and that's it, until it falls apart, like Steve Waugh's." Brian Booth (left) got his first gig as Test captain in Allan's debut match, after the latter had given Bob Simpson (right) an injury during a Shield match © Getty Images

So, Allan made his debut at the age of 29; in the same match, Doug Walters made his debut, at 19, and set the tone for his career with 155. Walters would go on to play 74 Tests; Allan never played another. And it was one of only two Tests captained by Booth - the other coming later in the same series.

"He was a gentleman," Allan says of Booth, who was a devout church-goer and lay preacher. "Wouldn't say 'shit' for sixpence."

In the first innings, Allan took the new ball and claimed 2 for 58. He remembers bowling Smith, the England captain, and has a vague recollection of trapping "one of the England quicks" lbw. (It was Ken Higgs.) But come the second innings, he bowled only three of 50 overs due to illness. Then, when the series moved on to the second Test in Melbourne, McKenzie returned.

"I was 12th man in the second Test, in Melbourne," Allan says. "Then I was dropped from the third Test, in Sydney, which was a blessing in disguise, because that was when I played the Shield match against Victoria in Melbourne, for Queensland, when I got the ten wickets in the innings.

"'Sticks' Brayshaw did it the year after me. That was against Victoria, over in the west. His was more remarkable because he got it in four spells. And before that it was Tim Wall for South Australia against New South Wales in Sydney, in the 1930s. It's only happened three times. The game has changed so much. One bowler doesn't get the chance to keep going anymore."

Most bowlers will go through an entire career without a ten-wicket innings at any level; Allan managed it twice within three months

Not that pushing through unchanged did Allan any favours in the long run, for it led to a broken ankle that ended any chance he had of returning later in the Ashes campaign. Instead, he finished the year with a ten-wicket haul for the South Brisbane Cricket Club. Both ten-wicket balls were mounted and presented to him, and Allan still has them - the Shield ball noticeably has plenty of shine left on it. "It swung the whole match," Allan recalls.

But another Test never eventuated for Allan, whose Sheffield Shield career ended in 1969, his tally of 182 wickets at 25.29 a state record at the time. Away from the game, he worked for the tobacco company WD & HO Wills ("I wasn't a smoker, which made life a little bit difficult"), having in his younger days worked in the oil industry in Melbourne, though he never made the Victoria Shield team and had to wait until returning to Queensland for his first-class debut.

Later, Allan spent 20 years working for the Brisbane City Council, including as manager of the Commonwealth Games Stadium used in 1982. And of course there were his days as a publican and then as a marriage celebrant on a tropical island paradise. It has been quite the varied life. Still, for a Test debut and a pair of ten-fors, it's hard to beat that one, very good year.