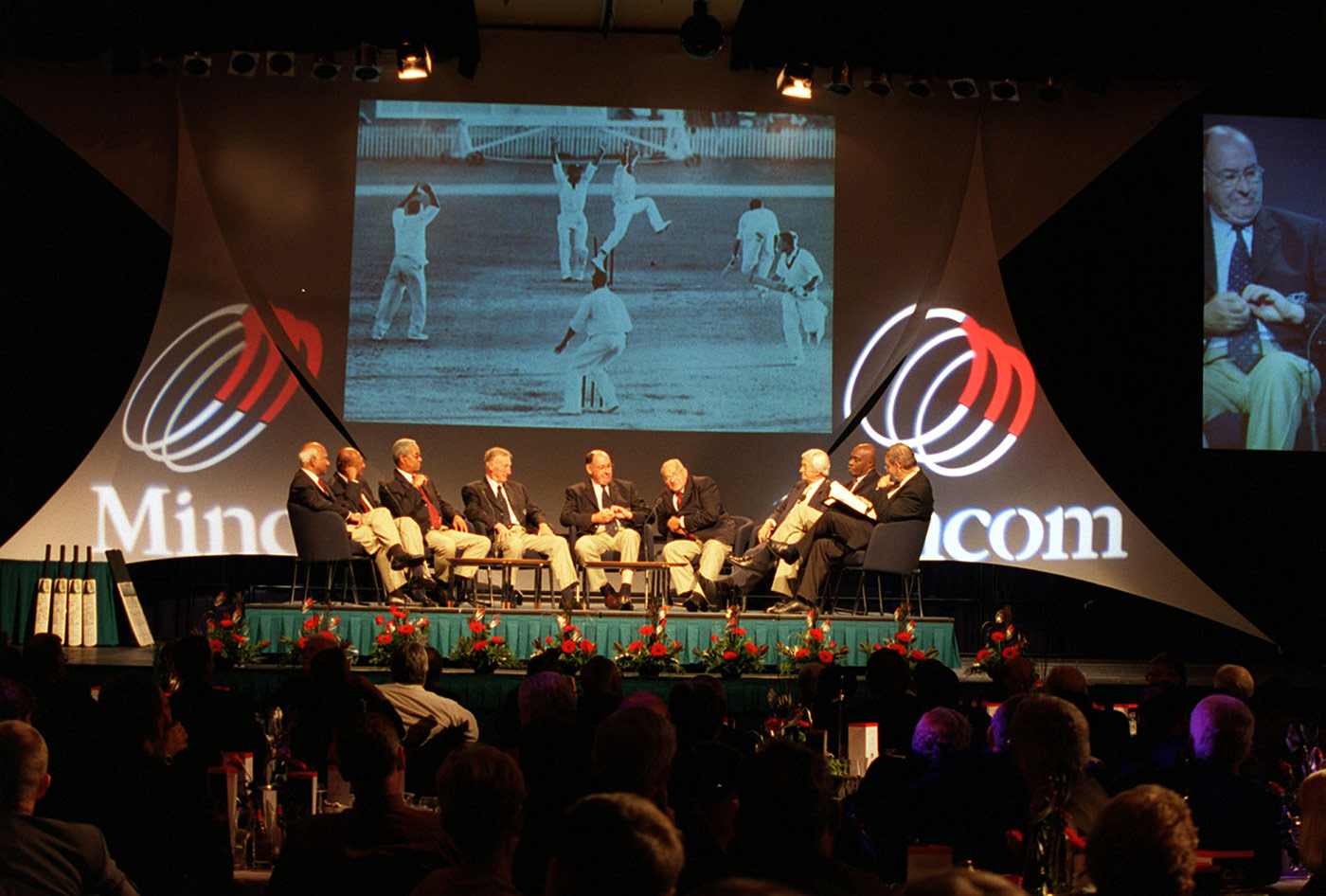 Run-outs can be galling at the best of times; here are five that have dashed dreams, turned matches and sent crowds into a fury

Joe Solomon runs out Ian Meckiff
Brisbane, 1960
When Sir Donald Bradman declares a match decided by a run-out as "the greatest thing that's ever happened to the game" as he did to Australia captain Richie Benaud, we know this is no ordinary throw-down of the stumps.

With six runs to win off the final eight-ball over, and with three wickets remaining, it looked like Australia would steal this already dramatic Test. Benaud was well set on 52, and after he called Wally Grout through for a leg-bye on the first ball, only five runs were needed off seven deliveries. But Wes Hall, charging in on blistered feet, dug one in and Benaud was caught behind, hooking. Two scrambled runs left Grout and Meckiff wanting three from three, but Meckiff swiped down to Conrad Hunte at midwicket who skimmed in the return for the first of two sensational run-outs. Australia were now poised on 232 for 9, and the teams tied. One run was needed off two balls, with one wicket remaining.

Enter stage left Solomon, poised at square leg. As a boy in Guyana, Solomon said that he would "try to throw at the mangoes to get them down from the trees", practice, he believes, that helped him clatter the stumps when batsman Lindsay Kline nudged the ball to square leg and tried to steal the single that would win the game. Kline had told Meckiff to "run on this ball, no matter where it goes". Unfortunately for Australia, that was to the bullet arm of Solomon, whose dead-eye aim resulted first ever tied Test match in cricket. All's well that ends well: having run Derek Randall out in the first innings, Geoff Boycott (right) walks off with him after England win the Test © PA Photos/Getty Images

Geoff Boycott runs out Derek Randall
Trent Bridge, 1977
My father, another cricketing son of the Nottinghamshire coal fields, never forgave Boycott's assassination of the beloved local boy, Randall, before his home crowd at Trent Bridge. Okay, perhaps assassination is strong word to use. This is only a game. Then again, if you watch the clip of Randall scrambling to make his ground, footage that never gets any less painful to watch because we know he's condemned, assassination might not be the wrong word.

Boycott, back in the Test team after three years of self-induced exile, is under pressure to perform. And Retford man Randall was hardly relaxed, describing appearing before his home crowd as a prospect that "gave me more butterflies" than any other match in which he played.

This run-out is as simple as it is tragic. Boycott pats one back into Jeff Thomson's hands, and then gallops up the pitch to strand poor Randall. He tries sprinting to save his wicket, but the effort is always doomed. Rod Marsh crashes down the stumps, and Rags keeps running towards the gate. The locals boo as pantomime villain Boycott stands there with his gloved hand over his face, and poor Rags trudges on to the pavilion. Boycott later wrote that "if the ground had opened and swallowed me at that moment it would have been a mercy".

Testament to Sir Geoffrey, though, as he did go on and make a ton that he still recalls as one of his best. Mike Gatting runs out Mike Atherton
Lord's, 1993
"Oh tragedy, tragedy," cries BBC commentator Tony Lewis, as Atherton, slips, and then slips again, before Merv Hughes' throw hits Ian Healy's gloves and he whips off the bails. "Absolute nightmare," Lewis adds, while Atherton, looking like he's about to cry rather than burst into a tirade of expletives, makes that famous walk back through the Long Room.

Poised on 97, building a potential match-saving partnership with Gatting in what would be another Ashes series drubbing, Atherton clips Allan Border off his legs in front of square. Lewis triumphantly calls, "Runs," and then counts "98, 99," as Atherton takes the easy two. Then the indecision, the stutter, start, stop.

If the two men had gone immediately, Gatting would have made his ground and Atherton his century. The throw from Hughes is wide of the stumps, but Atherton, clown-like on an invisible banana skin, is on all fours and even further away from the stumps.

England, predictably - it is the '90s, after all - lost the game, and Atherton would never make a century at Lord's. "Those few yards are going to live with him forever," remarked Lewis. "One of us should have gone that way" © Getty Images

Faf du Plessis runs out David Miller
The Oval, 2017
"One of the most ridiculous things you'll ever see in cricket" reported the South African. "David Miller And Faf du Plessis Become Laughing Stock As Terrible Goof-Up Leads To Hilarious Run Out" gleefully blared the headline on Indiatimes.com.

In a must-win game versus India in this summer's Champion's Trophy, South Africa - forever labelled tournament chokers after years of bailing out of knockout competitions despite constantly being tagged as silverware favourites - were going through the gears at 142 for 3 off 29 overs, with danger man Miller joining du Plessis at the crease, when calamity, and ultimately hilarity, struck.

Perhaps spooked by AB de Villiers being run out the over before, du Plessis taps one down towards third man, and immediately looks skittish. There is what looks like a classic exchange of "Yes, no, yes, no, maybe", but ultimately du Plessis decides to head back to his ground. The problem is Miller wants the keeper's end too, and, not content with playing India for a place in the semi-final, South Africa's batsmen are now competing against each other for survival. Both launch themselves for the line, du Plessis gets there first, and the crowd are treated to a sport within a sport before Virat Kohli taps the bails off and puts Miller out of his misery. Never has running between the wickets looked more confusing - not that it'll be the last bout of white-line fever we'll see on a cricket field. 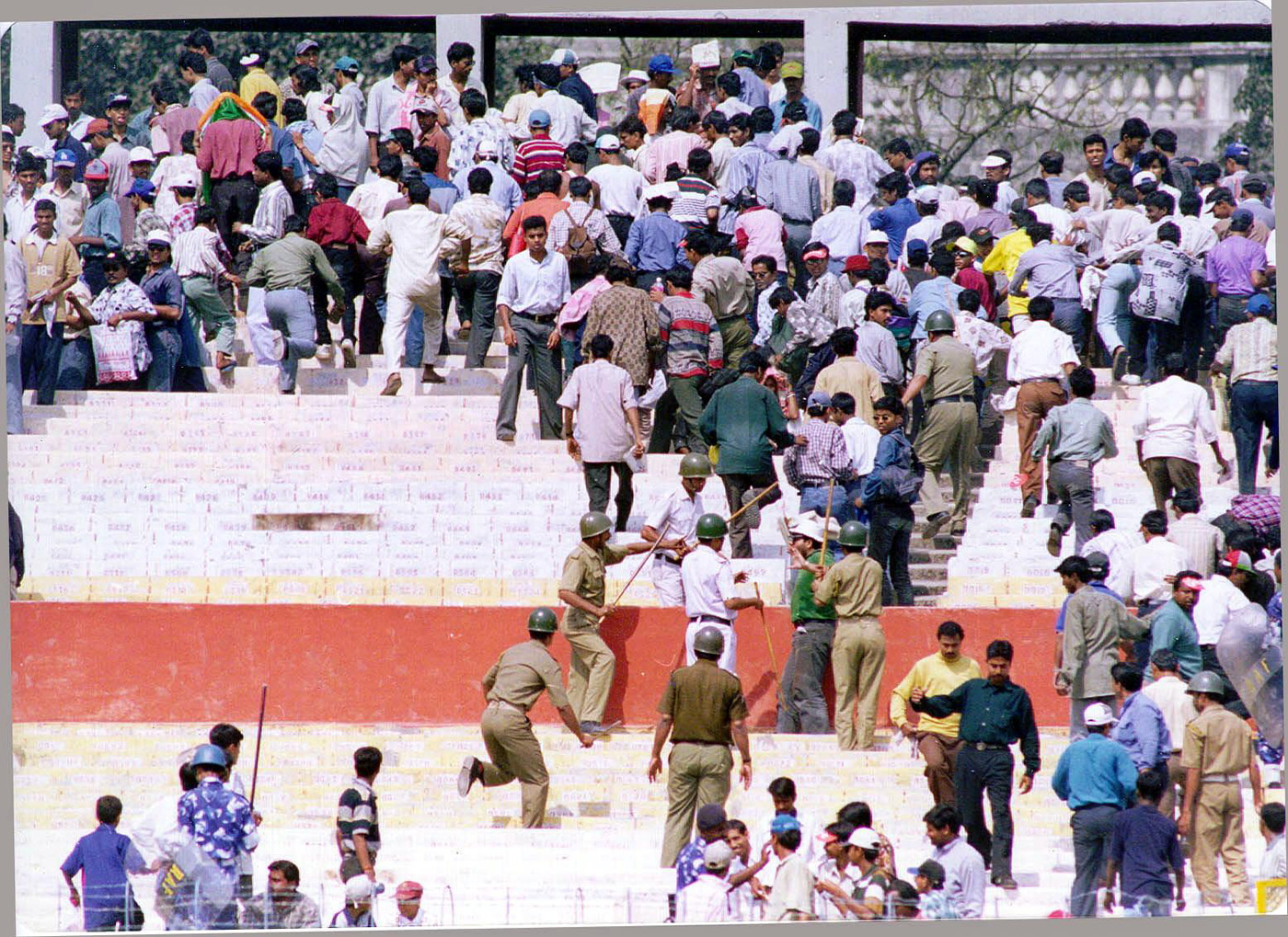 When a crowd favourite is controversially run out, this is what can ensue © AFP

Nadeem Khan runs out Sachin Tendulkar
Eden Gardens, 1999
A Test match that broke the record for the highest aggregate attendance would end in near silence before a few hundred police, security officials, and journalists, after a contentious run-out, and a collision, between two poster boys - one of Indian and the other of Pakistani cricket.

It all begins on the fourth afternoon with India at 143 for 2, when Tendulkar drives Wasim Akram wide of mid-on and shuttles through for what should have been an innocuous three runs. However, substitute fielder Nadeem Khan, perhaps wanting to make his mark on the game as 12th man, hurls the ball in to the stumps. Now, depending on your point of view, either Shoaib Ahktar moves up to the wicket to simply receive the ball, or steps across the wicket to block Tendulkar's path. The two men collide. India and Pakistan collide. The direct hit removes the bails, and while the third umpire replays the footage, the crowd chant, "Cheat, cheat, cheat." Once Tendulkar is dismissed, and off the pitch, the players back away from missiles thrown onto the ground, and gather in the square for safety, before retreating to the changing rooms.

Tendulkar, taking on a statesman-like role, appeared before the crowd to ask for calm, and although play resumed, once Sourav Ganguly was facing the ninth ball of the last day, the crowd kicked off again, burning newspapers and launching bottles onto the pitch. Sixty-five thousand fans were expelled from Eden Gardens, and although Wisden said that "there was no sign of violence", the Guardian reported that "elderly men, women and children were ejected, if necessary by kicking, punching and beating with lathi sticks".

The game finished in a win for Pakistan, before rows of empty seats at Eden Gardens. And all because of a run-out.

Nicholas Hogg is a co-founder of the Authors Cricket Club. His third novel, TOKYO, is out now. @nicholas_hogg The most dangerous runners between the wickets in cricket history, all in one team