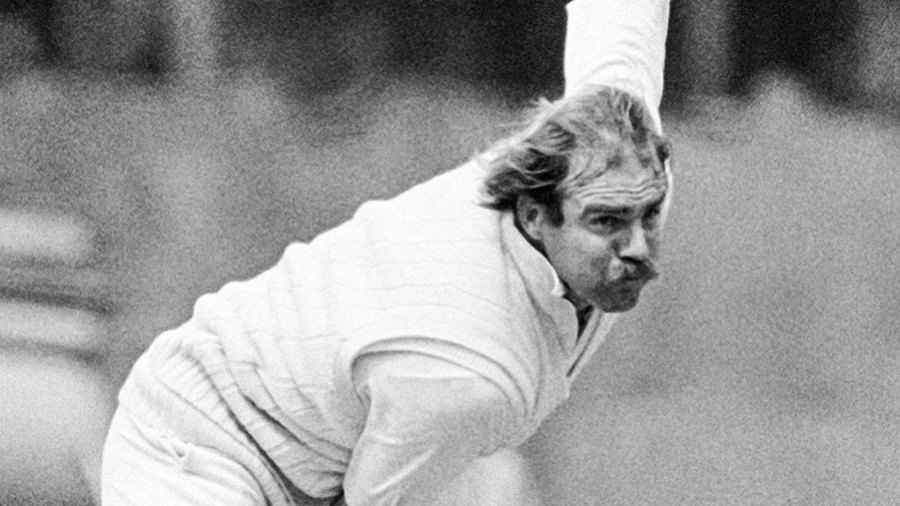 Fast bowers these days need to be more aggressive. There are few these days who bowl like Merv Hughes used to. Nasty. Right at the batsman. Mitchell Johnson broke Graeme Smith's finger, but I would have been asking him why he didn't bowl fast enough to break Smith's hand.

I could bat a bit. In some games, Sussex promoted me to No. 3.

If someone had tried to reverse-sweep me, like they do to today's quicks in T20 games, the next ball would have been straight at their mouth. It was bad enough being top edged for six from a pull shot. Even that made me really angry.

In one World Series game, I hit Dennis Lillee on the thigh with one that lifted. I thought, "That's not good, he'll be after me for the rest of the tour." And he was.

One or two batsmen hit me back over my head for six. Viv Richards did it once or twice, but the player who tried it most often was Chris Wilkins [Eastern Province and Natal]. He was particularly good at it. He'd move right back on his stumps and hit straight. This also gave him more time to hook and pull anything a bit short. He was the most annoying batsman to bowl at.

In one Sunday League game, Sussex sent me in early and I hit 50 in 24 balls. That was my finest moment with the bat.

I don't like to talk much about missed opportunities. The politics in South Africa back then was what it was.

"In one World Series game I hit Dennis Lillee on the thigh with one that lifted. I thought, 'That's not good, he'll be after me for the rest of the tour.' And he was"

Imran Khan, fantastic cricketer. Really inspirational to have him around the place at Sussex. A great opening partner. He could bowl quick, really nice high action, had everything a fast bowler needs.

I could play straight, but I wasn't much good at hooking and cutting.

Fast bowlers on fast pitches against quality batsmen. That's what gets the public excited.

I was just 23 when I joined Kerry Packer's World Series Cricket. Playing with and against the world's best players. I'd played against Barry Richards, Mike Procter and Clive Rice in South African domestic cricket. But not Javed Miandad, Asif Iqbal, Zaheer Abbas and all the West Indians and Australians. I was not long out of university and had only read about these guys in magazines. Then, to all of a sudden be bowling against the Chappell brothers and ducking Dennis Lillee bouncers. That was very special.

You can't have batsmen playing forward at you all the time.

When one of the very best players got in, Graeme Pollock, Viv or Barry Richards, you knew you had a long, hard day ahead of you.

I was hit in the mouth by a Clive Rice bouncer at Newlands once. When we came off, there was 30 minutes to go until the end of play. My captain, Eddie Barlow, told me to put some toilet paper in my mouth to stop the bleeding and get out there and bowl fast. I was riled up and really let it rip.

The Australian rebel tourists weren't the strongest side. The West Indies gave us a better game. 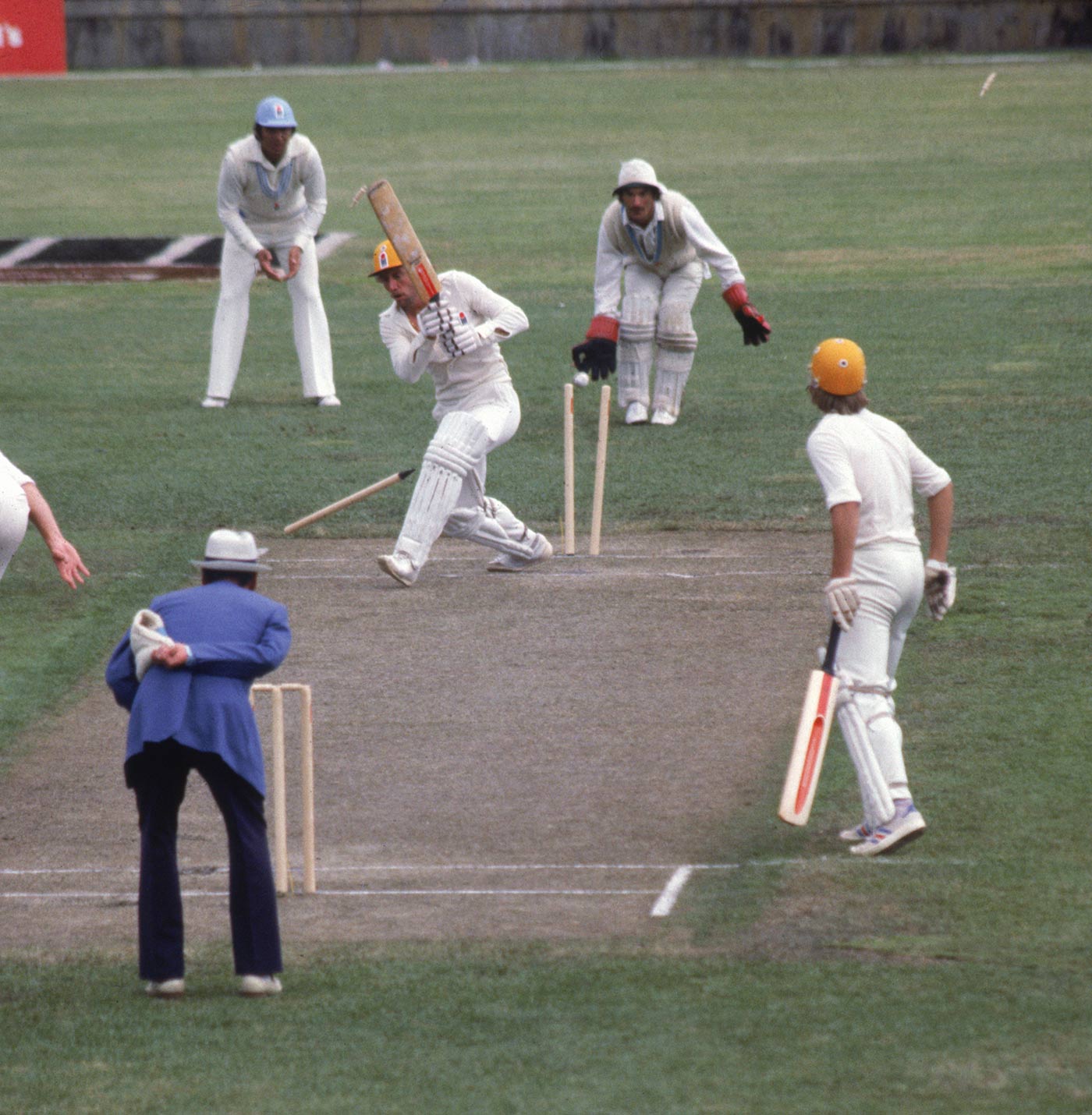 In one Sunday League game, against Essex at Hove, we were bowling first and Imran had got to the ground a bit late. We thought he might get into trouble, but it was Imran, so the captain, John Barclay, gave him a bit of leeway. Normally in the Sunday League the quick bowlers wouldn't have any slips, just run-saving fielders. But this time it was a bit green, so Immy said to Barclay: "Three slips and a gully, please." The Essex batting line-up was pretty good - Graham Gooch, Brian Hardie, Ken McEwan and Keith Fletcher, but Immy knocked over three of them in no time.

When I started, I knew just one thing. Bowl fast and straight. Back your ability and you'll get wickets. And that's what happened.

Some of the dropped-in wickets that we played on in World Series Cricket were beyond scary. The West Indies had a proper attack - any four of Andy Roberts, Michael Holding, Colin Croft, Wayne Daniel and Joel Garner. In one game they knocked us [the World XI] over for 102. but we got them out for just 67. Our pace attack was Imran, Rice, Le Roux and Mike Procter.

When Allan Donald first played for South Africa against the rebel Australians, he could hardly speak English.

Dennis Lillee was my hero as a kid. He was amazing to watch. Bowled fast, made a lot of noise, and let everyone know what he was thinking. All those nice things that a fast bowler should do. You'd never die wondering when Dennis was around.

Imran Khan and me stayed away from each other in the Sussex nets.

Today's pitches are too slow and low, not enough in them for fast bowlers. They've lost their bounce and seam movement.

I can understand why South African players take Kolpak contracts. You have such a small window of opportunity as a top-level cricketer, maybe five to eight years - during which you have to earn as much as you can.

"It's important for a fast bowler to breed a culture of fear. Then batsmen have to worry about getting hurt as well as getting out"

Playing against other fast bowlers didn't really scare me. They had to come in, too, and a lot of them couldn't really hold the bat.

The hat-trick I took for South Africa against the Australian rebel tourists was my third. I also took hat-tricks against Transvaal and against Ireland [for Sussex in the 1985 NatWest Trophy: Le Roux took 5 for 7; Ireland were bowled out for 39]. I bowled Greg Shipperd, got Kim Hughes caught behind next ball, and when Mick Taylor walked in we had loads of guys around the bat. As I ran up, I thought, "Full and straight, full and straight." It was full and straight and Taylor was out lbw. After the game, Clive Rice found one of the stumps and gave it to me as a trophy.

My fastest spell was for Western Province against Eastern Province at Port Elizabeth. PE was usually a slow wicket, but for some reason, this one time it was corrugated and green. Eastern Province batsman Keith Gradwell played back to one which bounced towards his face, hit the splice and broke his bat. Even their stars, Graeme Pollock and Kenny McEwan, struggled that day.

Ricey was a great captain. Nothing subtle about him. He led from the front, batting and bowling.

Coming to the end of my career, I just wanted to enjoy it while I could. I had slowed down a bit and bowled fuller, mainly outswing. I was still a reasonable pace, but I got a lot of wickets caught behind. That didn't last long, though. I didn't have the wherewithal to bowl only seamers. My view was that I would bowl fast or I'm done.

These days I work as an estate agent, selling properties on the Fancourt golf resorts in South Africa.

It's important for a fast bowler to breed a culture of fear. Then batsmen have to worry about getting hurt as well as getting out. 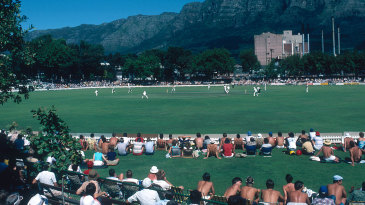 The Australian rebel tour to South Africa had its share of controversy, but it also sparked the emergence of future stars from both countries 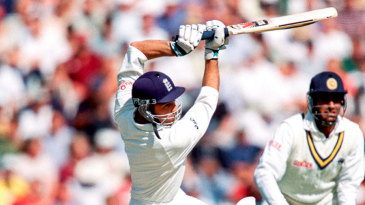 Is there a more frustrating sight than promise unrealised? Five writers on men who could have been great 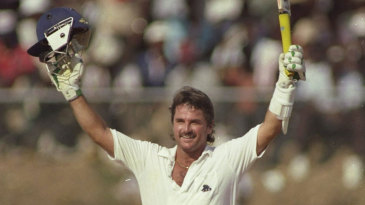 If you think the world's current No. 1 side takes some beating, take a look at their compatriots from 35 years ago