The Iceman: Wessels does his thing in a 1977 John Player League game

Five South Africans who would not, could not, did not choke

Kepler Wessels
Wessels was born for the job of captaining South Africa's post-readmission team. He spoke in deeds, not words. He wasted nary a stroke nor a glimmer of emotion. He wore his passion like a suit of armour. He walked - still does - with his jaw tucked, a wary eye aimed at the world, his shoulders rolling like a leopard's.

He had played 24 Tests and 54 one-day internationals for Australia when he was the exception in Clive Rice's team of otherwise wide-eyed, thump-hearted, squeaky-bummed South Africans who shambled into the cauldron of cacophony that was Eden Gardens on November 10, 1991 to do what no South Africa team had until then countenanced - play not only a one-day international but any match in India. His team lost, but he made a cussed 50.

Wessels wasn't perfect: you could smell the panic rising from the dressing room as, with unnerving calm, he went about making sure he couldn't lose before he tried to win. But choke? You need a pulse to be able to choke. Wessels' blipped twice a year, maybe. 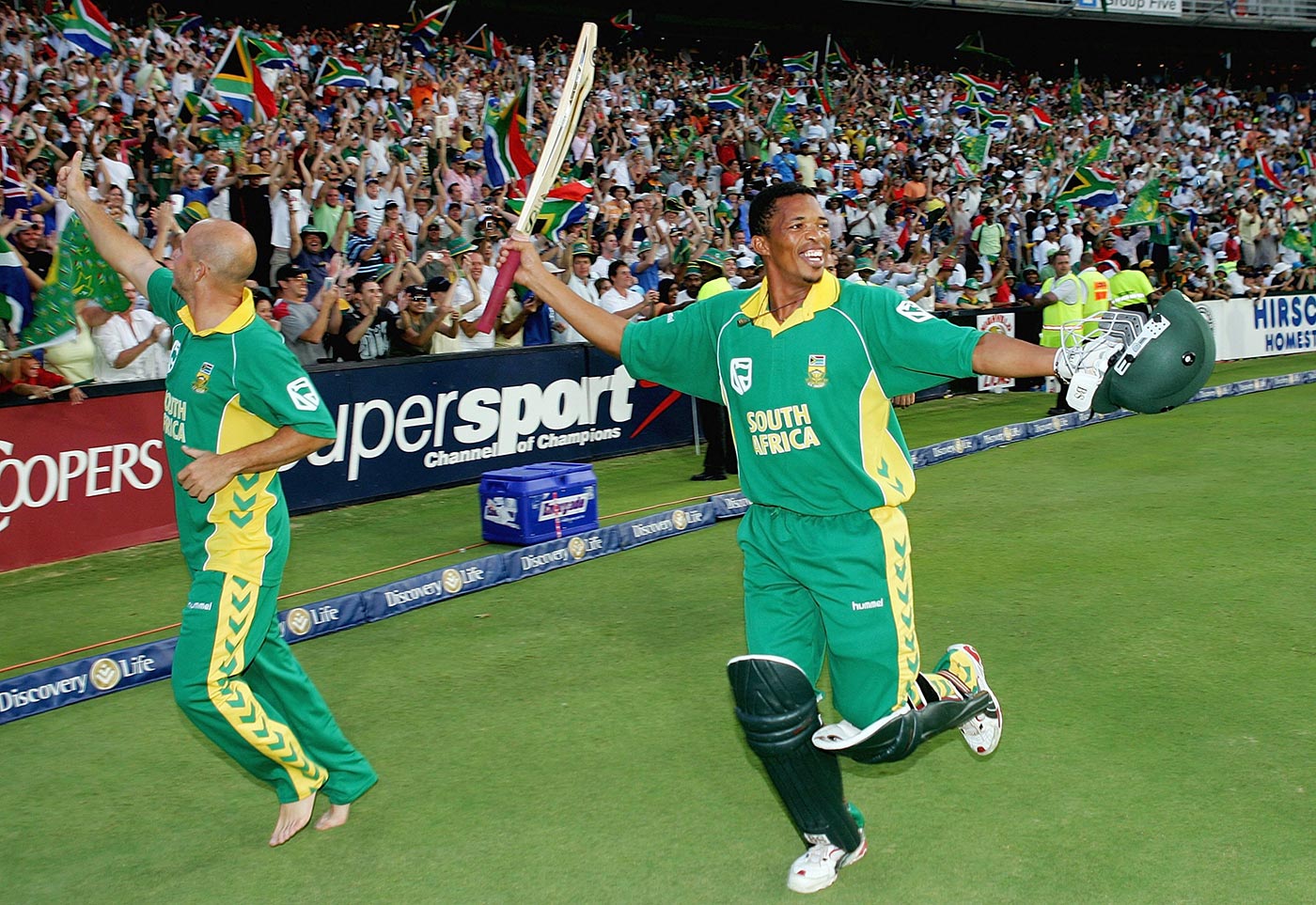 What, me worry? Makhaya Ntini does a victory lap after the 438 match © Getty Images

Makhaya Ntini
One not out. It's not the kind of score that hints at ice in the veins, especially in an ODI graced by 164 from Ricky Ponting - nine sixes! - 175 by Herschelle Gibbs, and Graeme Smith's 55-ball 90. When Ntini walked out at a thundering Wanderers on March 12, 2006 to face Brett Lee with one wicket standing, three balls left in the game and two runs needed to reel in Australia's outrageous 434 for 4, you could have frozen a fish finger on his forehead.

Ntini had one job - get Mark Boucher on strike - and he nailed it first ball, with the deftest of back-foot nudges to third man, leaving Boucher to lash the next delivery for four.

Never before nor after when he had a bat in his hands did the fate of a match, and in this case a series, rest so heavily on the broad shoulders of South Africa's yeoman fast bowler. But when he was called on to go once unto the breach he answered that call as if the scene had been scripted by Shakespeare himself. Aiden Markram
It's a reach, given that Markram is not quite 23, and is only two Tests into his international career. But he has made those innings count, scoring 97 on debut and 143 in his next match. And already he owns something for which many seasoned internationals, particularly those of a South African persuasion, would readily trade all their caps: a World Cup win.

Not only did Markram captain South Africa to triumph at the 2014 Under-19 World Cup, he was also their leading run scorer and the tournament's third highest.

He showed what he was made of in the final. Having engineered Pakistan's dismissal for 131, he opened the batting and saw four wickets crash for 100 runs. Then he got on with winning the game, scoring a sensible, unbeaten 66, only 24 of them in boundaries, off 125 balls.

There is little doubt Markram will become a fixture for South Africa soon, not least because he has carved a reputation as that rare thing in his country -- a batsman equal parts dazzle and determination. South Africa, given their problems in those departments over the years when the pressure has been on, will look to learn a lot from this young man. Albie Morkel
What's Morkel's value to the teams for which he plays? In May he was worth 180,000 votes by readers of this very website, who had been tasked with picking their all-time Indian Premier League XI. Of the 298 T20s he has played, his teams have won 164. That's a 55.03% success rate, better than Chris Gayle or Shakib Al Hasan.

Morkel is a match-winner. Often he lives up to that truth by hitting the ball harder and further than men of his relative lack of brawn would seem to have a right to do, not least because his idea of technique is to uncomplicate the over-thought idea of the most effective way for willow to meet leather.

And yet Morkel has not made an impact at international level, where he has played a Test, 58 ODIs and 50 T20Is in 13 years and has but three half-centuries and 77 wickets to show for his trouble.

Significant selectorial silliness is part of the explanation for all that, but sometimes purer talents and specialists have stood in his way. Opponents? Less so. Kagiso Rabada
As with Markram, putting Rabada on this list is a leap of faith. But only the most hardened atheist would not be able to see the light of doing so. Since the first ball was bowled in the first game of cricket played in South Africa, no one has been more obviously bound for glory.

Feline of face as well as of grace, Rabada talks as slow as he bowls fast. There is a deliberateness in his pronouncements that marks him out as a player who will not be rushed, an unshakeable commitment to thinking before doing. And a sense of perspective.

When Rabada rashly bounced Gayle in a T20I at Newlands in January 2015, his punishment was to be smashed for six, six, four, six and four by the jammy Jamaican. Rabada's reaction to the pasting he had undoubtedly earned? A smile. Delivered slowly, of course. Hey, he seemed to be saying, it's a T20. Let's lighten up and have some fun. We'll save the seriousness - and the flared nostrils - for the proper cricket.

Telford Vice is a freelance cricket writer in South Africa Get to know the man who will challenge Kohli, Root, Smith and Williamson