Pringle: somebody strap a guitar on him

Meyrick Pringle
Pringle is best remembered by a generation of South African cricket fans for taking the first four West Indian wickets to fall in a crucial 1992 World Cup group match in Christchurch, giving him priceless figures of 4 for 11 in eight. A good line-and-length man with a special away-ducker when mood and conditions took, Pringle also possessed the greatest mullet in the history of the game.

Despite its full body, it was of little but cosmetic value when, a year later, he was felled by a Javagal Srinath bouncer while on Test duty at the Wanderers. The blow effectively ended poor Pringle's international career.

Pringle played much of his provincial cricket with Rod McCurdy, an Aussie and another mullet man, down at Eastern Province. The likes of Kepler Wessels and Mark Rushmere sported conformist straight-back-and-sides haircuts at the time, but this didn't find favour with Pringle, who was McCurdy's new-ball partner most of the time, and the two looked rather like refugees from a hard-rocking Uitenhage covers band. It might be no more than rumour that the two were asked by umpires on more than one occasion to leave their biker jackets on the other side of the boundary rope before taking the field. McMillan: could bat, could bowl, could field, could impersonate French monarchs © Getty Images

Brian McMillan
Pringle was no match for McMillan in the meanness stakes. The only arena in which he could, in fact, compete, was in the silly-hairstyles category, where "Big Mac" sported a towering Louis XIV bouffant through much of the mid- and late 1990s.

A technically correct allrounder whose shamble to the crease disguised a delivery that hit the bat hard, McMillan was also a sublime slipper and a vital team man. His haircuts, however, were on the ropey side, which perhaps isn't surprising when one considers that he grew up in Johannesburg's West Rand, where small mine-subsidised houses predominate and having a souped-up orange Toyota with mag wheels adds considerably to your cachet with the opposite sex.

McMillan's blind spot in the hairstyle stakes is more remarkable when one considers that he was otherwise tasteful, other perhaps than in the odd lapse of his tongue. His pompadour left much to be desired, although this clearly wasn't the view of a Headingley pigeon that tried to take refuge in it on the 1994 tour to England, an audacious manoeuvre that led to much chirruping from Henry Blofeld in the press box. McMillan would of course point out that at least he had some hair (and something deeper inside the skull). "How does your garden not grow, master?" Gibbs admires the finish on Viv Richards' skull © Getty Images

Herschelle Gibbs
Gibbs arrived on the first-class scene as a callow 16-year-old with a full head of hair, initially struggling before becoming one of South Africa's most dashing batsmen of the post-readmission period. Unlike the fabled Samson of the Bible, Gibbs tended to be more effective the less hair he had, which led (via a shaved head or two) to the "bald ostrich" look of his mature years. The look was well regarded and came to be seen as a Gibbs trademark; it also - so we are told - helped those aerodynamic, Rhodes-like dives he made famous at deep backward point.

While his hairstyle (if it could be called that) was instantly recognisable, it wasn't quite as famous as his careless "throwing away" of the 1999 World Cup, when his drop at short midwicket of Steve Waugh has to be one of the greatest blunders in the history of the game. Perhaps Gibbs' penchant for the ostrich-egg look was his way of saying sorry? Then again, the carefree Gibbs was never one to linger on his past, preferring in his later years to get into scrapes with the law and say provocative things about South Africa's chances in whatever ICC knockout event was coming up. Jacques Kallis
Kallis, Gibbs' team-mate, went in the opposite direction, adding to rather than subtracting. For all his brilliance as a batsman, the legendary blunter of attacks was unable to win the long battle with a receding hairline, so in the latter stages of his illustrious career he went in for hair-replacement therapy a la Shane Warne, with whom he appeared in an advert on South African television. The lush and full-bodied result pleased not only Kallis but every headline writer in the country. A full summer was spent on puns, double entendres and cheesy asides. Cricket might have been played but very little cricket was watched, as scribes looked instead for tell-tale shoots on Kallis' forehead.

He was amiable throughout, taking the ribbing about his new rug with a good-natured smile. At one point the analysis of whether the hair would "take" found its way to the op-ed pages of the nation's newspapers, although eventually the fascination slowly - how shall one put it? - receded. Finally Kallis was left alone to do what he does best without having to worry about whether there was any grass on the deck - as it were. 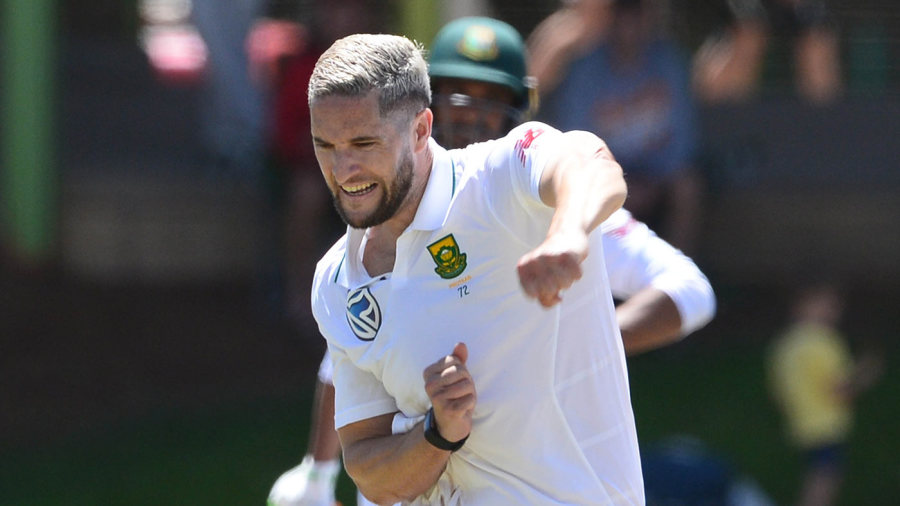 Parnell with a haircut so unassuming, it's fashionable © Gallo Images/Getty Images

Wayne Parnell
Which brings one to Parnell, the latest in a long line of mildly flaky Saffers who keep the game interesting with an array of unusual haircuts. For the second Test against Bangladesh in Bloemfontein this year, Parnell sported a peroxided brush-cut with an extreme side part, inspiring some wags to dub it "white lightning". Indeed, it might have been a subtle homage to Allan Donald, whose home town Bloem is, but alas, the style didn't seem to add greatly to wicket-taking or ball-swinging ability, shortcomings in which departments rather haunt the underachieving Wayne.

Then again, he is nothing if not creative. Not a season goes by without some hair-lengthening, darkening or braiding from him: a bushy beard or a shaved side of the head or a topknot. Among these has been "the poodle", and experimentation with a Pirates of the Caribbean look.

This is all well and good, but perhaps it's about time that Parnell started concentrating on becoming more than this season's borderline selection as he boomerangs in and out of the side. If not, he could be spending more time in the salon than already seems to be the case.

Luke Alfred is a journalist based in Johannesburg We have shortlisted some of the coolest hairstyles we've come across in cricket. What's your No. 1 pick?