When less is more (exciting)

England v Australia
first semi-final, World Cup 1975, Headingley
A reused wicket, a red ball, white clothing and funereal run scoring: this felt less like a semi-final of the first World Cup than a throwback to Tests on uncovered pitches.

The game began with England fretting about Dennis Lillee and Jeff Thomson enacting a reprise of the carnage of their 1974-75 Ashes tour of broken limbs and spirits, hoping that a green pitch would neuter their strengths. It worked, sort of. Those two bowlers took only 1 for 43 between them.

But Gary Gilmour, a left-arm swing bowler who had not been picked in the group games and was only playing his third ODI, exploited Headingley's low clouds. This was not subtle swing; it was boomerang swing, curving viciously late from over the wicket into England's right-handers. When his 12-over spell was done, Gilmour had absurd figures of 6 for 14, five of the wickets coming through inswing.

Yet his work was not done. Gilmour was summoned to bat with Australia 39 for 6, and their pursuit of 94 imperilled. He made 28 not out, the top score of the match, to clinch Australia's place in the final. "It was one of those days," he said, "that happen once or twice in your lifetime." He would only play two more ODIs. India v West Indies
final, World Cup 1983, Lord's
When West Indies lumbered up at Lord's on June 25, 1983, they were as dominant in ODI cricket as a football team favoured by the state in the Soviet Bloc. They had an imposing batting line-up, Michael Holding as their second-change bowler, and had already won the first two World Cups.

When India scrapped to 183 batting first, all seemed well in the Caribbean cricket dynasty. But then came moments that would be forever etched into India's cricketing DNA: Kapil Dev's catch off Viv Richards; Madan Lal's medium pace, newly transformed from functional to venomous; Mohinder Amarnath's dibbly-dobblers flummoxing the tail. And then, serendipity: Holding tried to pull Amarnath, missed, and the crowd invaded Lord's to savour history.

Surely none who did so realised quite what this victory meant: it unleashed forces that would recalibrate the cricketing world forever. India had only played 40 ODIs before this tournament, and regarded them as superfluous set against the serious business of Test matches. In the years ahead that would all change: they played 73 before the next World Cup, which was hosted in the subcontinent, as the sport belatedly recognised India's growing importance. West Indies were still regarded as a powerful side, while Kenya's preparations for their first appearance in the World Cup were summed up by the board's response to the players requesting white balls to prepare for the tournament: unable to afford new balls, they instead painted the existing red balls white. The chasm in resources seemed evident as Kenya laboured to 166. West Indies' openers fell quickly enough, but there was still Brian Lara to contend with. He began his innings with the air of a man who already had thoughts of his post-match drink, and slashed his 11th ball behind. The problem was that Kenya's wicketkeeper was Tariq Iqbal, who had the air of a clubbie who had won a competition to play in the World Cup, and had already spilled a catch and conceded four byes through his legs at the start of West Indies' innings. This time, though, Iqbal clung on. West Indies subsided and were all out for 93.

Man-of-the-Match Maurice Odumbe entered West Indies' changing room and handed Lara, who had refused to give Odumbe his autograph two years earlier, his own signature. "I asked for your autograph and you wouldn't give it. Now I am saying you can have mine." NZ v Oz: Eden Park got a heart-thumping thriller when the hosts met for their first encounter of the 2015 World Cup © Getty Images

Australia v New Zealand
World Cup 2015, Auckland
A low-scoring classic that, paradoxically, showed the ODI's evolution. This was a match with old-school limited-overs scores, yet one played at breakneck pace, by two teams who only knew how to play their cricket in accordance with French general Ferdinand Foch's dictum: "My centre is giving way, my right is retreating, situation excellent, I am attacking." And so they did. On a pitch with a straight boundary so short that it needed special dispensation from the ICC to be allowed to host ODIs, Australia passed 50 in 5.3 overs before, almost unfathomably, losing eight wickets for 26, five to Trent Boult's vicious late swing. Powered by a raucous Eden Park crowd and the team's own buccaneering spirit, New Zealand refused to countenance approaching their target of 152 sedately: Martin Guptill bludgeoned a four and a six from Australia's first two deliveries. Brendon McCullum played with the swagger of an All Black: his 50 came up in 21 balls, as each bowler was treated with equal contempt, though he was nursing an injured hand.

His wicket was only a cue for New Zealand to double down. With 21 needed from 30.3 overs and six wickets in hand, Corey Anderson slog-swept Glenn Maxwell to mid-on, and Mitchell Starc unleashed a ferocious torrent of yorkers, which surpassed even those of Boult. Then, with six runs needed, Kane Williamson mocked his "steady the ship" moniker, thumped Pat Cummins over the long-on boundary and unleashed pandemonium. B is for basking in the pleasure of a hard-fought win: Ian Bradshaw and Courtney Browne walk back after clinching the Champions Trophy © AFP / Getty Images

England v West Indies
final, Champions Trophy 2004, The Oval
A final in England on September 25 hardly invited a day of free-spirited hitting. In conditions that made the gentle seamers of Wavell Hinds, Paul Collingwood and even Marcus Trescothick potent, not a single six was scored. Still, after Trescothick's century, England's 217 had put them well on course for their first global ODI trophy. When Shivnarine Chanderpaul got a leading edge off Collingwood, West Indies were 71 long runs away from victory, with only two wickets remaining. But after a summer of Test drubbings by England, here was Caribbean revenge. Courtney Browne and Ian Bradshaw, two unobtrusive cricketers, shared a partnership for the ages - accumulating steadfastly, and defending stoutly against Steve Harmison and Andrew Flintoff, who may never have bowled better together as a pair than in the summer of 2004. And then, with 24 to win from the last five overs and Harmison and Flintoff bowled out, Bradshaw and Browne, born in Lambeth, picked England off in rapidly fading light. They dedicated their unlikely victory to the victims of Hurricane Ivan. And what of England's first ODI global trophy? Forty-two years after the first World Cup, we're still waiting. 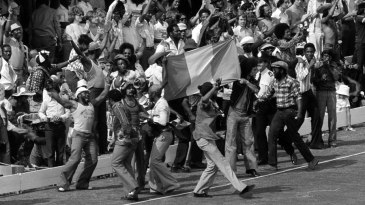 The year we grew up In the creeping dark, a miracle spreads radiance