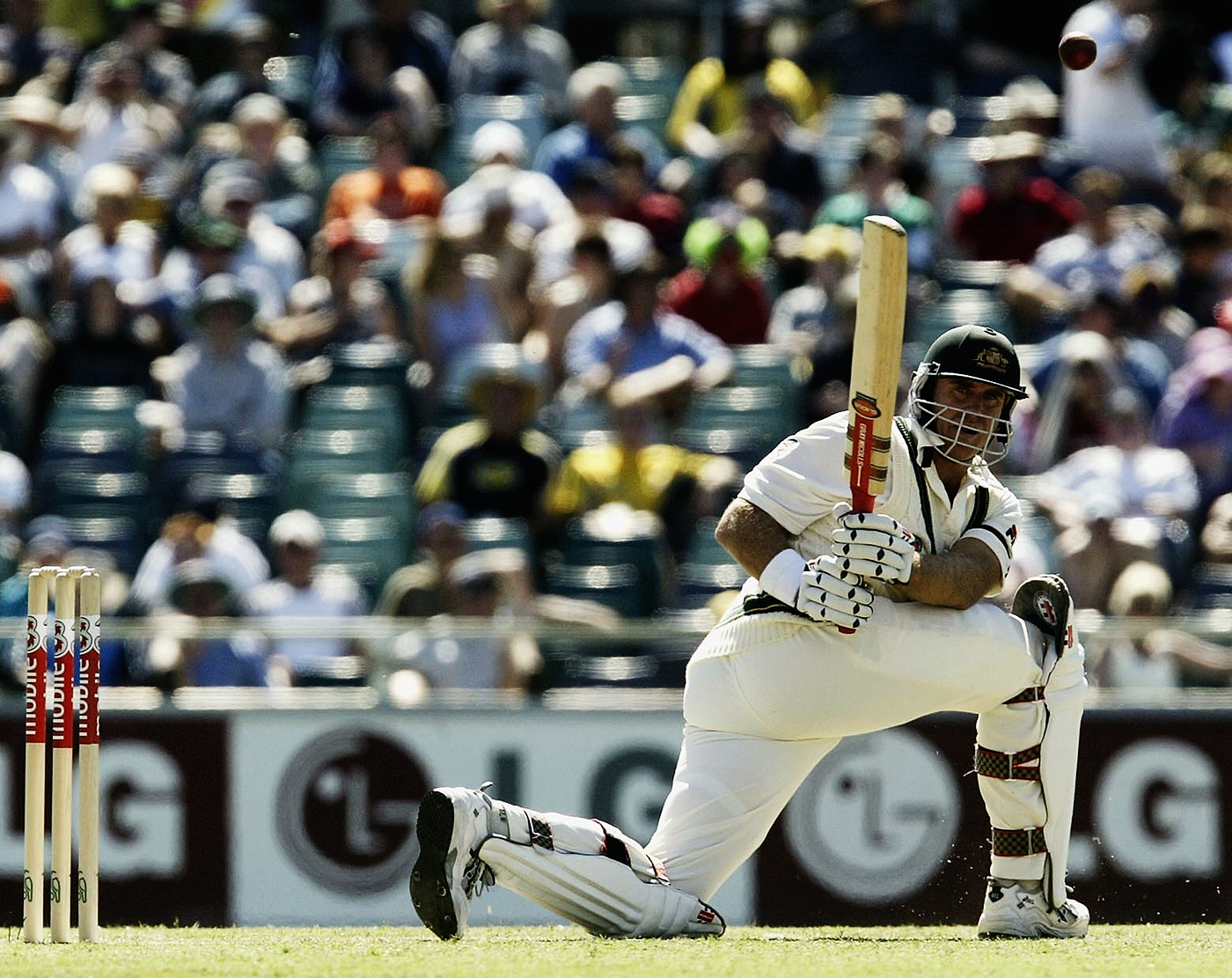 He's all bat: Matthew Hayden with an improved Gray-Nicolls during his 380 against Zimbabwe in Perth, 2003

Who are the fastest scorers in Test history?

How do Sehwag, Warner and Co match up against Trumper, Bradman et al? What about Richards and Jayasuriya?

It is a remarkable thing that for most of Test history the balance between bat and ball remained relatively constant. While not true of every era, the consistency made easier the historical comparison of players and teams.

Thirty runs per wicket was the average in Test cricket for a long time - from the 1920s right through to the end of the century. Prior to that, bowlers held sway; inferior pitches were more common, and batting techniques less sophisticated, at least in the 19th century. In England, before 1920, professional cricketers were usually bowlers. After 1920, batting averages were steady for a long period; the slight blip in the graph in the '20s and '30s is largely an effect of Don Bradman. 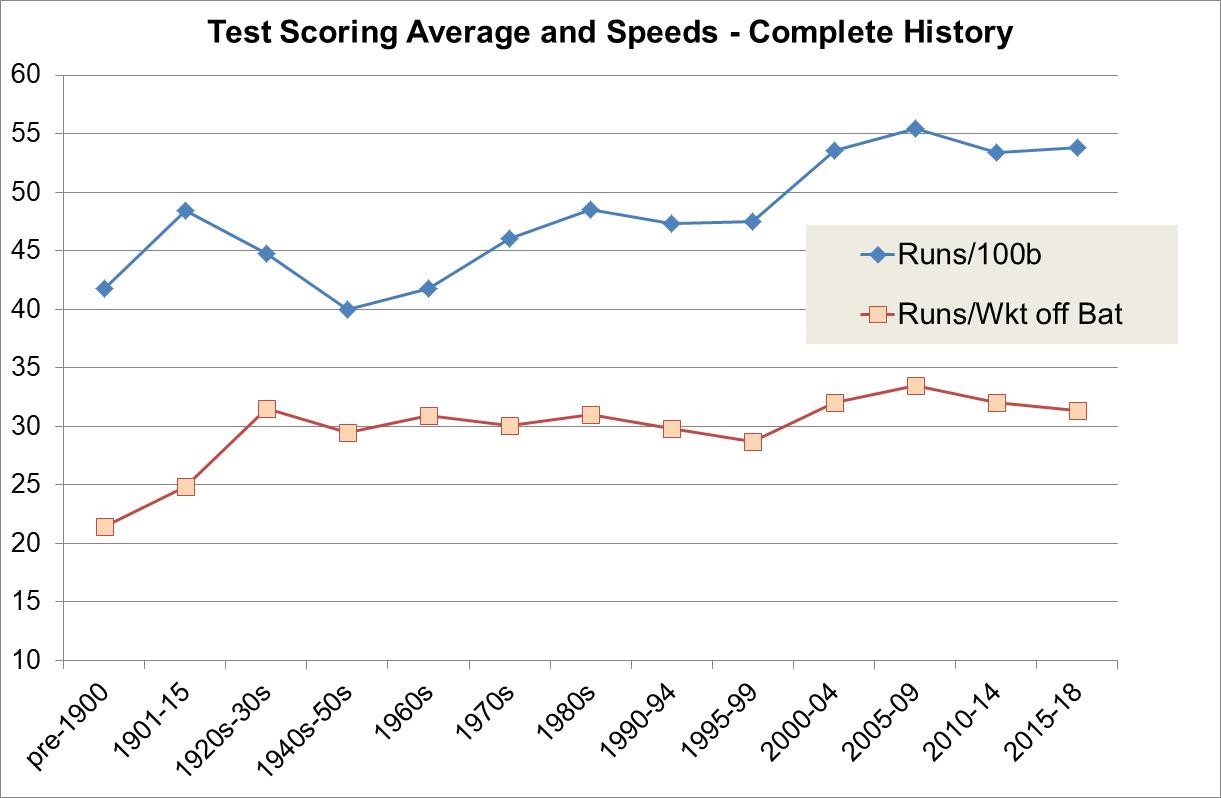 The data on scoring speeds is not quite so consistent, and shows some well-known effects. There is a high point from 1901 to 1915, part of what is known as the Golden Age, followed by a significant decline to the very slow scoring of the 1950s (lasting well into the '60s). At the time there were many and increasing calls for "brighter cricket"; one response was the invention of the limited-overs game, which gradually forced even the most defensive batsmen to develop more strokes. I think the effect of this development can be seen in the increasing scoring rates in Test matches from the 1960s to about 1990, after which the effect levelled off.

But something happened at the start of the 21st century. Scoring speeds, and to a lesser extent run-scoring itself, surged to new highs. This event can be better seen in this more detailed chart: 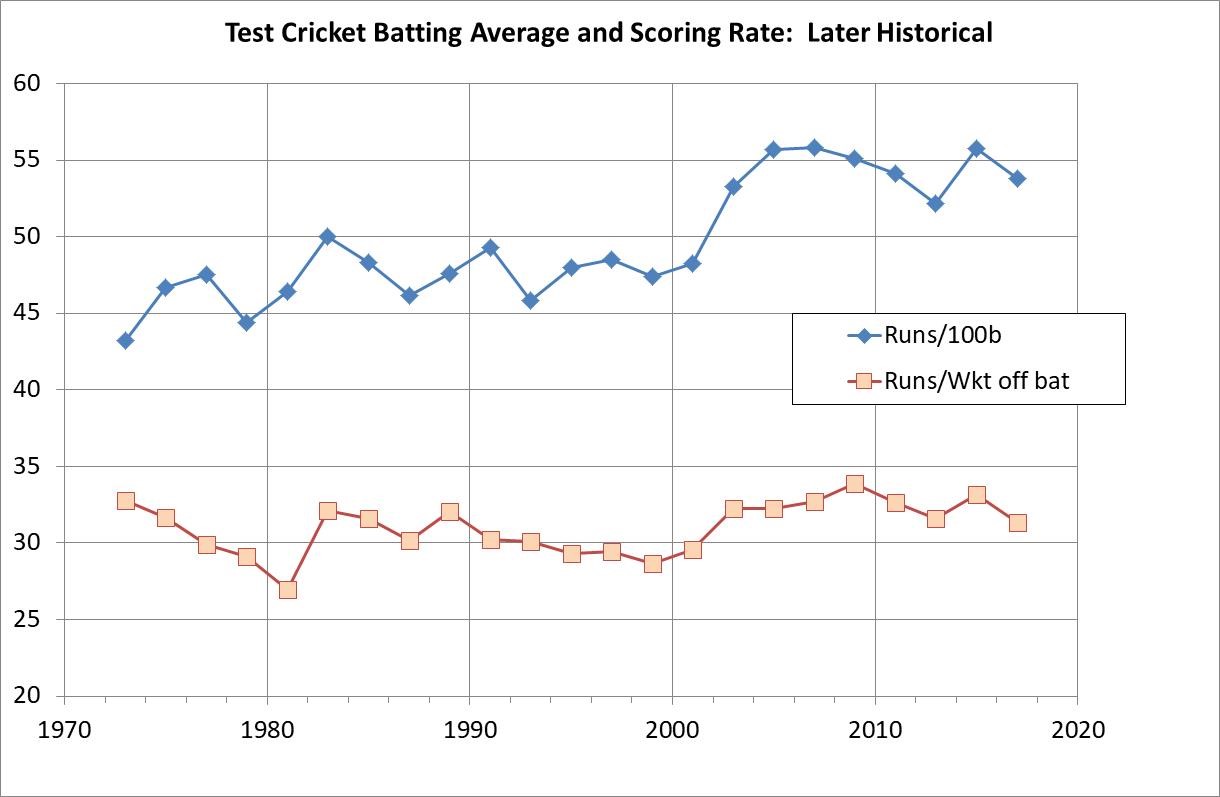 Charting with more detail introduces a few fluctuations to the graph, but it would be unwise to try to read too much into each one. The low point in run-scoring in the early 1980s is hard to explain. It might be just one of those random variations; it is certainly strange that from March 1980 to June 1982, more than two years passed without any team scoring more than 528 in an innings. In the last two years (2016 and 2017), there have been more than two dozen such scores.

The gradual upward trend in Test scoring speeds from the early '70s to the early '90s was fairly steady. The sudden leap into the game as we know it today took barely two years (2001 to 2003). Since then the changes have consolidated and have become permanent. Two factors have been widely identified: the shrinking of grounds using boundary ropes, and the unregulated introduction of "super bats", which made hitting boundaries, especially sixes, vastly easier.

We can chart the changes in a more subtle way. When boundary-hitting becomes easier, shots for three tend to decline. The ratio of fours to threes becomes a sensitive indicator of the ease of boundary-hitting. This can be seen historically in Australia, where the mix of grounds has not changed much and the grounds in the past were larger than elsewhere. (Results in other countries, such as India, are less clear-cut because of the changing mix of grounds.) 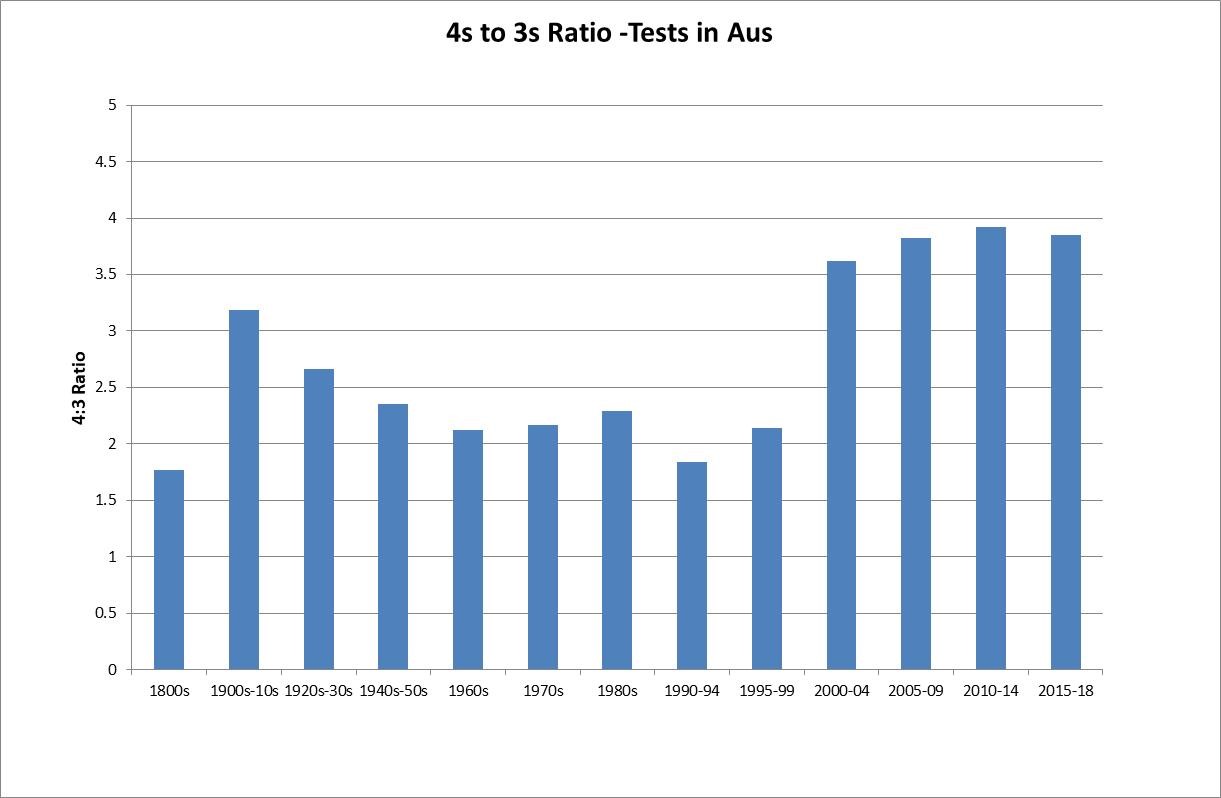 The spike in the fours-to-threes ratio from 1900 to 1920 in Australia may have a more prosaic explanation than a "golden age". At the major Australian grounds in the 1890s, cycling tracks were installed or modified on the playing surface and these reduced the playing area. These were very unpopular among cricket fans, and in the early 1920s the tracks were removed and the original playing areas restored.

More recently, the turn-of-the-century surge in scoring can be seen to be quite sudden - less than five years - with very little change thereafter. The sudden change is especially clear if we look in more detail at the figure below. 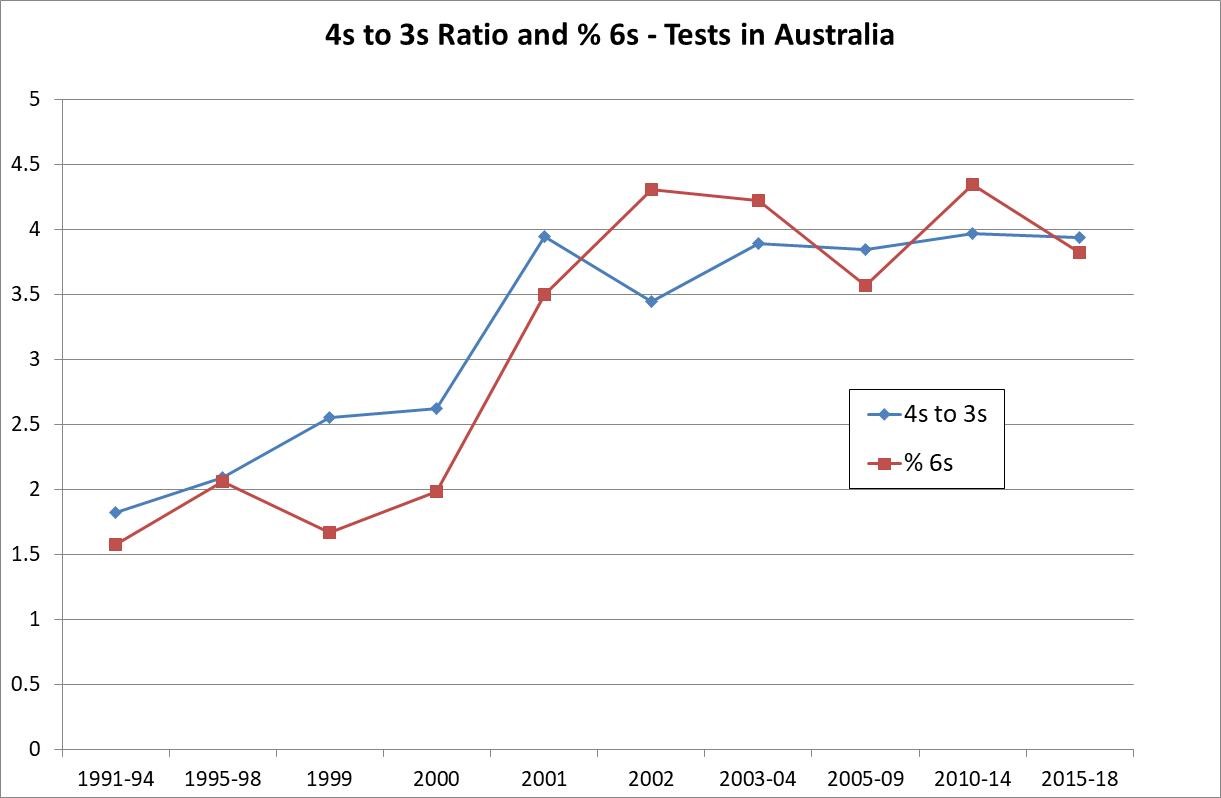 Most of the increase in boundary-hitting came in a single year, between 2000 and 2001. This coincides better with the development of super bats than with shrinking grounds, since the latter were introduced gradually and boundaries in Australia were not reduced to the greatest extent until about 2002-2003. As the figure above shows, the incidence of six-hitting continued to increase after 2001 before levelling out.

The changes in Australia seem to have occurred about a year before they became apparent around the world. I don't know why this might be: perhaps the Australians were early adopters.

Matthew Hayden wrote in his autobiography that he was using an improved-technology (Gray-Nicolls) bat when he made his 380 at the WACA in 2003, and added that other bat-makers had been changing their technology for a couple of years before that. "When I now pick up bats I used early in my career they seem so inferior," he wrote. In his 380, which took 436 balls, Hayden hit 11 sixes and 38 fours, but only one three. This on a ground where Geoff Boycott had faced 440 balls across two innings without a hitting a boundary in 1978-79 (his only four was all run and included two overthrows), and Bruce Edgar had gone 269 balls between boundaries in 1985-86. There were ODIs in Perth in the 1990s where there were no boundaries in the first 25 overs.

On a couple of occasions, I have sat through a Test day in Melbourne and made a note whenever I thought the shortened boundaries led to any bonus runs (you really need to be at the ground to do this, it is difficult to do from the TV broadcast). The resulting estimate was a 3-5% increase in scoring. Occasionally the effect was considerable. In the recent Ashes Test at the MCG, Moeen Ali hit a straight six that did not even reach the fence. It dropped a few centimetres over the rope and came to a stop. In days gone by this would have been an easy catch, or two runs at most. In baseball such a shot would probably fall short of the outfield.

It would be nice if the sudden change in run-scoring patterns could be confirmed by looking at the history of one-day internationals, but in reality, ODIs have followed their own path. Since the early 1990s there has been a steady increase in the scores of teams batting first, which over a quarter of a century has added up to a substantial change, but there have been no major step changes. 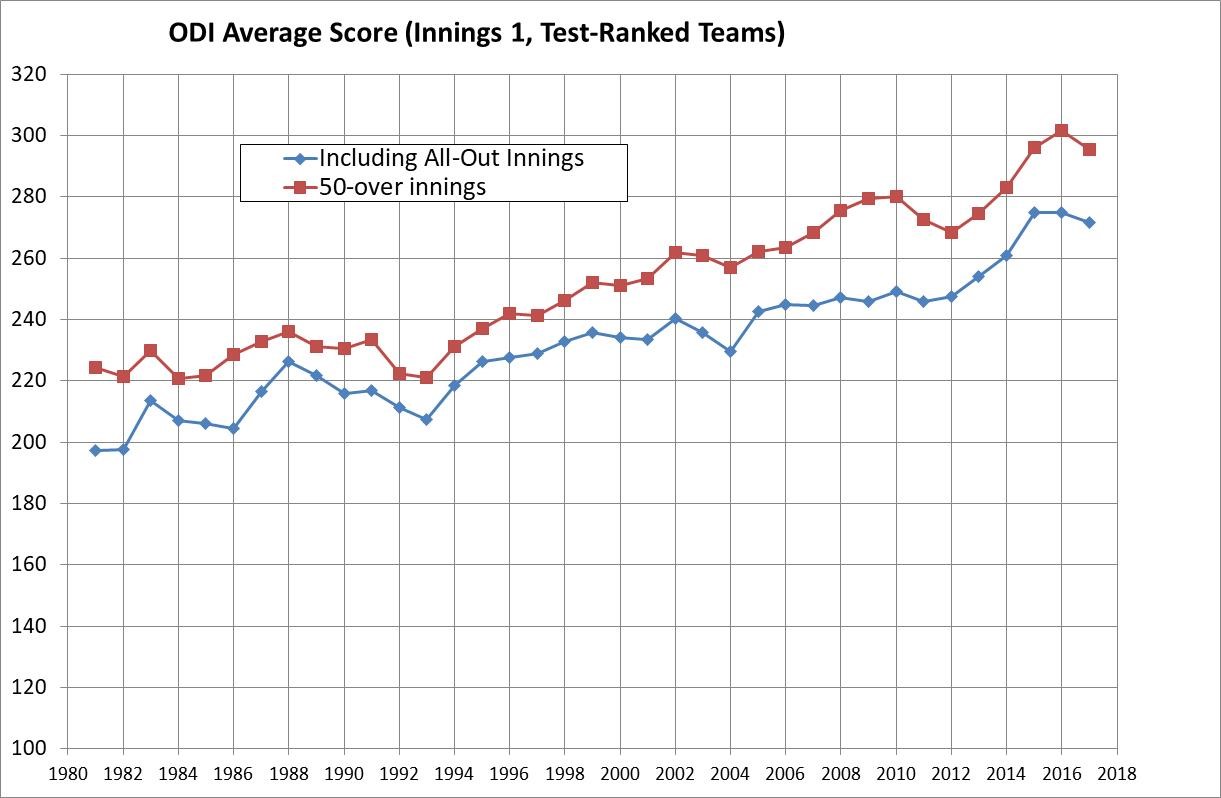 It is not entirely clear (to me) why the turn-of-the-century break point, obvious in Tests, is not apparent in ODIs. One reason could be that that the shrinking of grounds occurred earlier and more gradually in ODIs. In some countries boundary ropes have been used for a long time in day-night games because it allows the available lighting to be concentrated on a smaller area. More recently, the use of two balls has curtailed the effectiveness of reverse swing and increased late-over scoring rates.

Meanwhile ODIs on pitches that favour bowlers have become ever rarer. Games with fewer than 550-600 runs scored, in which the bowlers have the better of things, are now regarded as dull (I couldn't disagree more, but that's just me) and groundsmen respond to demands from authorities for big-scoring pitches.

The percentage of runs scored as sixes in ODIs has increased from around 5% in the early 1990s to over 10% in recent years, but the increase has been gradual, with some acceleration after 2005. T20 may be a factor here, as techniques developed for the shortest form have filtered through to the 50-over game. The changes may well be psychological as much as technological; as batsmen find it is easier to hits sixes, they become more confident with the shots and attempt them more and more.

Which brings me to the subject of individual batsmen and the fastest scorers in history. Traditionally such calculations have been limited by the lack of balls faced (BF) data for older Tests. However, there are ways around this.

For one thing, I have obtained BF data for over 89% of Test innings, with virtually complete coverage for every batsman of the last 30 years, and substantial coverage for nearly all major batsmen of earlier years. For batsmen from earlier times, the missing data can be filled in using estimates of speeds based on minutes batted and prevailing over rates. Minutes-batted data is available for over 99% of all innings. In the tables below, batsmen with missing BF data are identified by specifying a range of probable speeds rather than exact figures. Hence Maurice Tate is given a likely range of 75-76 runs per 100 balls, because only 88% of his innings have BF data; for the other 12% I have used minutes-batted figures.

It is clear that lists of the fastest-scoring batsmen are becoming dominated by lower-middle-order allrounders and wicketkeepers. So I have prepared an alternative list that only considers fully recognised batsmen who bat in the top six.

I have also taken the liberty of "normalising" the data, so that innings played in the era of shorter boundaries and super bats are adjusted downward by a factor allowing for the general changes in scoring speeds. The adjustment was applied after 1975. From 1975 to 2000, scoring rates were similar to the historical average and little change was needed (usually plus or minus 1%). The necessary adjustments increased after 2000, and from 2005 to 2017 the average adjustment has been 12-15%. Actual adjustment factors varied from year to year (with some data smoothing) and were based on scoring rates that year.

As a result of normalising the data, Virender Sehwag's scoring rate falls from a raw figure of 82.2 to a normalised 72.9; even so, he comes in at No. 1 in the new list. Without normalisation, David Warner would have a rate of 74.7, Sanath Jayasuriya 65.2, Shikhar Dhawan 66.6, Tillakaratne Dilshan 65.5 and Brian Lara 60.5. Kevin Pietersen has a rate of 61.7, good enough for 13th place on raw data, but falling out the top 20 at a normalised rate.

In terms of runs per hour, Victor Trumper, at 40 runs per hour, takes first place among major batsmen, ahead of Stan McCabe and Frank Woolley on 38, and Charlie Macartney and Bradman on 37. Recent batsmen are hampered by this measure, due to the much slower over rates. The fastest of recent times has been Adam Gilchrist, on 34 runs per hour.

Although balls faced is strictly a better measure of a batsman's performance, I feel that batting time, a half-forgotten measure, is rather underrated nowadays. Look at it from a spectator's perspective: a century in two hours will always seem more exciting to watch than one in three hours, even if they are otherwise similar and if the number of balls faced are the same. This is one reason why Trumper was so fondly remembered, even revered, by those who saw him. It has been said, ad nauseam, that Trumper's greatness could never be measured in terms of statistics, but this is not so. Look at his ranking in these tables.

Trumper's speed also shows up one of the problems today in Test cricket. In Trumper's time, a typical Test day in Australia would last five hours but contain 100 overs of play. Today most full days need six and a half hours to produce 90 overs, and often fail to reach that. Interminable on-field conferences and other interruptions have slowed down Test cricket at a time when other aspects of life are speeding up and people are becoming "time poor" (or say they are) and disinclined to put that much time aside to watch cricket. Test cricket desperately needs to become "faster", as opposed to "brighter", but what is to be done? 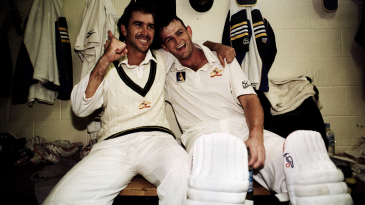 Some win games, some save them. Starring Laxman, Langer and others 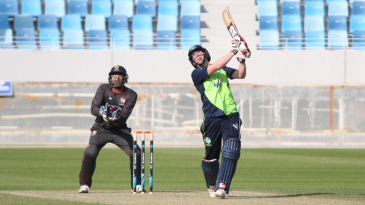 The six-hitting revolution is only getting started

The power-hitters are breaking new ground. Meanwhile, bowlers are hampered in the development of their skills by a number of factors 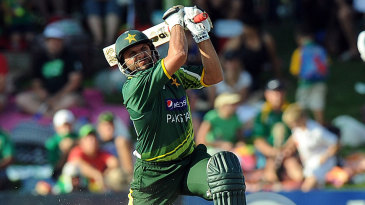