Iceberg Imran: it took him a decade to really show the huge impact he'd have on the game

The slowpokes who became superstars

Six cricketers whose careers went from morose or middling to magnificent

Did you predict, on first viewing, that alleged allrounder Steven Smith would achieve almost Bradmanesque statistical status? That the waywardly mercurial young Jimmy Anderson would metamorphose into one of the most effective and precise masters of a cricket ball in the modern era? If so, congratulations. And please apply your supernatural prognosticatory skills to a more important realm than cricket. Your planet needs you.

This list is a celebration of remarkable personal improvements. To qualify for this list, the player must have endured a significantly lengthy period of struggle at the start of his career (rather than merely a disastrous debut series or an underwhelming rookie year). Those who took time to excel following an unusually youthful introduction to the international game are also disqualified (Garry Sobers did little of statistical note during his teenage Test apprenticeship; Sachin Tendulkar took 76 innings to score an ODI hundred).

The shortlist for this short list is, frankly, not very short. Contenders ranged from current champions, such as Smith (who averaged under 30 in his first 11 Tests; and averaged 20, with no half-centuries, in his first 27 ODI innings, in four and a half years), and Anderson (62 wickets at 39 in his first 20 Tests, also spread over almost four and a half years); via recent greats of the game, who could easily have been permanently jettisoned by their selectors based on their early performances (such as Steve Waugh and VVS Laxman, who averaged 26 and 27 respectively in their first 20 Tests); to distant legends who might have been long-forgotten specks in cricket history (Warwick Armstrong, a crucial figure in the evolution of Australian cricket, took just five wickets at 83, and averaged 23 with the bat, in his first 13 Ashes Tests).

Charlie Macartney
The Governor-General is one of many long-dead cricketing superstars who would have sent the IPL cash machine into hyperdrive. He was the second of five men ever to score a century before lunch on day one of a Test. In 1921, he made 345 in under four hours against a Nottinghamshire attack containing four bowlers who had already or would eventually play Tests for England. Why would you pick a 34-year-old who averages only 26.6 with one century from 21 Tests, as Charlie Macartney did? Because he'll obviously soon start averaging about 70 © Getty Images

In 14 more Tests after the war, from the 1920-21 Ashes to 1926, he took only 11 more wickets, at 32.3, but compensated by averaging a startling 69.5 with the bat, hitting six centuries and three more fifties, and entrancing the world of cricket with his unorthodox attacking brilliance. Quite how the Twittersphere would have reacted to the Australian selectors returning to a 34-year-old Test failure when the war-induced hiatus had given them ample scope to turn to someone new can only be guessed.

Alec Bedser
Jimmy Anderson would be a worthy entrant on this list. In his first 20 Tests, not only did he average almost 40, but also posted an economy rate of 3.7. In his most recent 40 Tests, he has averaged 21.1, with an economy rate of 2.4. He would be one of the first names on the all-time England Misleadingly Ordinary Career Beginnings XI (just ahead of Stuart Broad). However, he has been elbowed aside by his post-war predecessor as England's chief manipulator of a cricket ball, Alec Bedser, partly because Bedser managed to cram in two different misleading starts into an international career that spanned only nine years.

In his debut series, against India in 1946, the Surrey sorcerer took 24 wickets at 12.4. He then averaged over 50 in his next two major series, in Australia and at home against South Africa, and over 30 in the four after that. By the time the 1950-51 Ashes began, he had taken 76 wickets in his previous 23 Tests, at an early-era-Andersonian average of 39.9, with only one five-for (an unremarkable 5 for 127 against West Indies when he took some cheap tail-end wickets in a ten-wicket defeat).

He then took 30 wickets at under 18 apiece in each of his next two major series, again in Australia and at home against South Africa, followed by three more series in which he averaged under 18. By the end of the 1954 summer, Bedser had, in his last 23 Tests, taken 131 wickets at 17.2, with 12 five-wicket hauls and three ten-wicket matches. He had taken five in each innings to drive England to a first post-war Ashes Test win at the MCG in February 1951, then 39 in their first Ashes win for two decades, in 1953. What is a successful cricket life? The answer might be 23 © Getty Images

Only SF Barnes has ever enjoyed a more purple 23-Test patch for England (factoring in both number of wickets taken and bowling average; the young Ian Botham came close). Only Imran Khan (see below), Waqar Younis, Muttiah Muralitharan and Barnes have taken 125 or more wickets in a 23-Test sequence at a lower average than Bedser.

Bedser played only twice more for England, but the 46 Tests (or, more accurately, the two batches of 23 Tests) that he played between 1946-47 and 1954, form one of cricket's most striking examples of a Career Of Two Halves.

Richie Benaud and Alan Davidson
Benaud and Davidson could each qualify as individuals, but I include them as a pair due to their almost simultaneous elevation to cricketing greatness. Both had been ineffective components of a serially losing team; both rapidly switched to become defining lynchpins in a prolonged period of Australian dominance.

In October 1956, Australia lost a one-off Test in Pakistan, skittled for 80 on day one by Fazal Mahmood and Khan Mohammad. Benaud had played 24 Test matches, and taken 50 wickets at 34.4. He had played in three losing Ashes series, including that summer's spin-dominated rubber in England, in which his eight wickets in five Tests compared unfavourably with Jim Laker's 46 for England. Australia had won seven and lost eight of his 24 matches, and excluding his single match in the 1951-52 series win against West Indies, Benaud had appeared in just one victorious series, a 3-0 win in West Indies in which, with 246 runs and 18 wickets, he had enjoyed his only individually successful rubber to date.

Davidson had played 11 Tests, featured in the same three losing Ashes series, and had never (a) been on the winning side in a match, or (b) taken more than two wickets in an innings. His batting average was 18. His bowling had been barely noticeable. The late bloomers: Alan Davidson (batting) and Richie Benaud (non-striker) hit their strides together and took Australia through a very successful period in the late-1950s © Getty Images

We can safely assume that, at this point, both men must have sacrificed a spectacular number of extremely high-class oxen to Zeus. Each became an era-defining champion. Australia won their next seven series, and in the eighth (Davidson's last, Benaud's penultimate) they retained the Ashes with a 1-1 draw. They won 18 and lost four of the Tests in those series. Benaud took 186 wickets in 35 Tests at 24.3; Davidson 171 in 33 at 19.3, accounting for 56% of the wickets taken by Australia's bowlers in those series. Between them, they took 29 five-wicket hauls. They also averaged 25 and 27 with the bat respectively. And took 66 catches between them. There have been few less effective, and few more effective, pairs of Test cricketers.

Even those figures do not reveal the full extent of Imran's improvement in his late 20s, when the sporadic promise that took almost a decade to reach fruition exploded into an almost nuclear display of statistical fireworks. His first 35 Tests brought a batting average of 23.4; in his last 53, he averaged 52.7. In one 40-Test sequence between December 1980 and April 1988, he took 208 wickets at 16.8, the best average any bowler has returned in a 40-Test sequence, and he might have taken more had injury and rain not prevented or curtailed his bowling in several of those games. It took Kumar Sangakkara a while to get his first first-class hundred, but after that he was virtually unstoppable © MCC/CS

Kumar Sangakkara
Sangakkara is the one entry on this list who qualifies despite have made a perfectly decent start to his Test career. After a quiet debut series, he made 74 and 98 in South Africa, then 58 and 95 at home against England, giving him four half-centuries and an average of 33 in his first nine Tests. In themselves, these stats, without revealing the eventual mastery of his batting, in no way merit his inclusion in this list.

In his tenth Test, at the age of almost 24, he made an unbeaten century against India. It was his 50th first-class match, his 76th first-class innings - and his maiden first-class century. Of all the statistical quirks lurking within the increasingly engorged and confused annals of cricket, the fact that Sangakkara, one of the greatest practitioners of the art of batsmanship in the history of the game, did not score a century in his first 49 first-class matches, is one of the quirkiest.

He averaged 26.5 in those 49 games (24.6 outside Test cricket), then went on to make 38 Test hundreds, in 125 matches, and ended his first-class career scoring his 57th to 64th centuries in his final ten matches, for Surrey in 2017. Asserting that Sangakkara is the Greatest Ever Batsman Not to Have Passed Three Figures in His First 49 First-Class Matches is akin to claiming that pickled herring are bad at tennis, or that Usain Bolt was a faster runner than Inzamam-ul-Haq. It is a simple, unarguable fact. 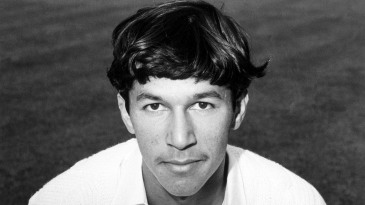 Before the cricketing world found out the power of Imran Khan, Imran Khan had to find himself 'The only way you learn to bowl is to bowl'

The former Australia allrounder reminisces about growing up, playing alongside Lindwall, batting in the tied Test, and being a Musketeer 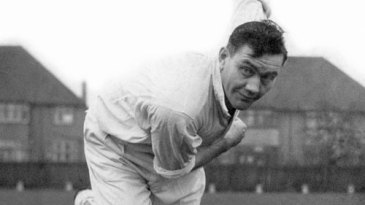 A giant of his generation

Alec Bedser was an impressive figure of a man, and his feats with the ball were befittingly large