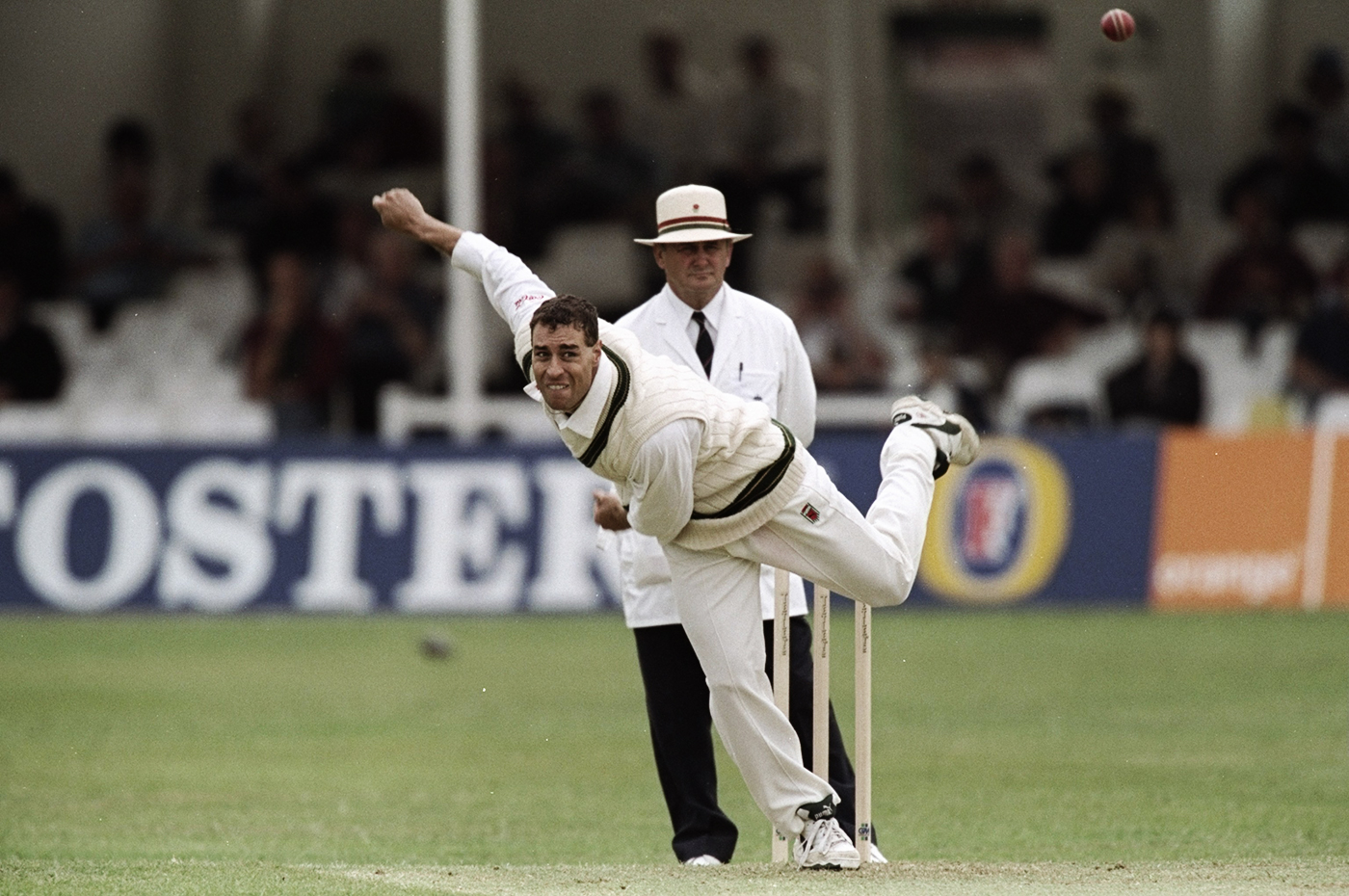 Twist of wrist: Michael Bevan took ten of his 29 career wickets in one Test

Allan Border
7 for 46 v West Indies, Sydney, 1988-89
Out-and-out batters seldom win Test matches with the ball for one very obvious reason: they are not bowlers. Rarely are they thrown the ball when the game is there to be won or salvaged. Often it's a token trundle just before the third new ball, or maybe a punt at 260 for 1 off 74 overs if there isn't a genuine fifth option. None of which was the case for one of Border's finest hours as a cricketer, when the captain - the same Border - chucked him the cherry early in the fourth Test against the 1988-89 vintage West Indians.

It was AB's 101st Test. In the previous hundred he had taken 16 wickets. So, a punt. By the end of day one he had seven more, as West Indies were bundled out for 224. The first two were long-hops plinked into the off-side ring by Richie Richardson and Carl Hooper. Viv Richards then played an awful defensive shot, working to leg against the spin to be caught at silly point. A drag-on, a top-edged sweep, a long hop smashed to midwicket and a third slap into the covers completed the 7 for 46, better innings figures than Bill O'Reilly managed in his career. Or Dennis Lillee, Waqar Younis and Dale Steyn.

With the West Indians already 3-0 up, there may have been an element of complacency, yet by the time Border snared 4 for 50 in the second innings, he was walking off with what are still the all-time joint-third best match figures by a spinner against West Indies.

In 55 subsequent Tests before bagging up the baggy green once and for all, Border took just 12 more wickets, although that did include a spell of 30-11-68-5. Against West Indies in Georgetown. Oh West Indies!

Jimmy Adams
5 for 17 v New Zealand, Bridgetown, 1995-96
The batsman who can bowl a bit is often a dream in the nets: psychologically primed to think he's Malcolm Marshall or Muttiah Muralitharan, thus ever eager to keep on bowling, and technically good enough to allow you to groove your game, although not so good that he will damage your confidence - which is precisely what they do to the opposition in those Halley's Comet moments when their bowling comes off.

It might be a stretch to describe Adams as an eager net bowler, since his general on-field demeanour was focused vexation, scowling like a man with a splinter in his you-don't-even-want-to-know. And the furrows usually deepened when invited to bowl - though he had started life with Jamaica as a full-fledged allrounder. Jimmy Adams: a five-for followed by a double © Getty Images

It was thus something of a surprise when, in 1996, Adams' fellow Jamaican Courtney Walsh asked him to have a trundle mid-afternoon against New Zealand at the Kensington Oval - a ground on which 13 of Adams' 27 Test wickets were taken in six appearances (and in two of those, against Australia, he didn't bowl a ball) - and he went through them like scotch bonnet soup, with 9-4-17-5. "You're happy to contribute and it looks good on the CV," he reflected, "but it was bad batting more than anything. I don't think it was much to do with my skill as a bowler". Wisden agreed, calling it "a bizarre form of suicide".

A Sherwin Campbell double-hundred denied Adams the MoM, and in all likelihood West Indies would have bowled New Zealand out fairly cheaply without Adams' unlikely intervention. But then, if you're psyched up for Bishop, Walsh and Ambrose only to get rolled by Jimmy A, then there's probably no coming back from that. As for Adams, he scored a career-best 208 not out in the second Test.

Bevan's brisk left-arm wristspin, predominantly wrong'uns delivered from a nimble, bounding run, was very much a product of his environment. If, as a batter, you're going to offer the odd contribution with the ball, then floaty 70mph swingers or diffidently rolled out offies, the staple of your English part-timer, probably won't cut it in Australia, where it's usually wristspin or extinction.

In the first innings "Bevo" knocked out the bottom four - Courtney Walsh was batting at No. 9, which gives you some idea of the likelihood of lower-order resistance - while in the second, with the buffer of a 387-run lead, to which he had contributed an unbeaten 85, Bevan really went to work. Sherwin Campbell and Shivnarine Chanderpaul were snared at slip, Jimmy Adams at bat-pad, and a further three tail-end wickets were added. Bevan finished with the Man-of-the-Match award and figures of 10 for 113, numbers not bettered by too many Australian spinners. It gave Australia an impregnable 3-1 lead in a series considered an unofficial World Championship.

Bevan played just eight more Tests. Less than a year later he had been jettisoned, due largely to a perceived susceptibility to the short ball - which didn't prevent him accruing the the 17th best career first-class batting average in history. And he remained an ice-veined and ultra-consistent one-day finisher, underpinning Australian successes in the 1999 and 2003 World Cups, where his fast, fizzing and occasionally erratic twirlies remained a valuable if underused wild-card option. At least, a Test bowling average of 24.24 would suggest as much. 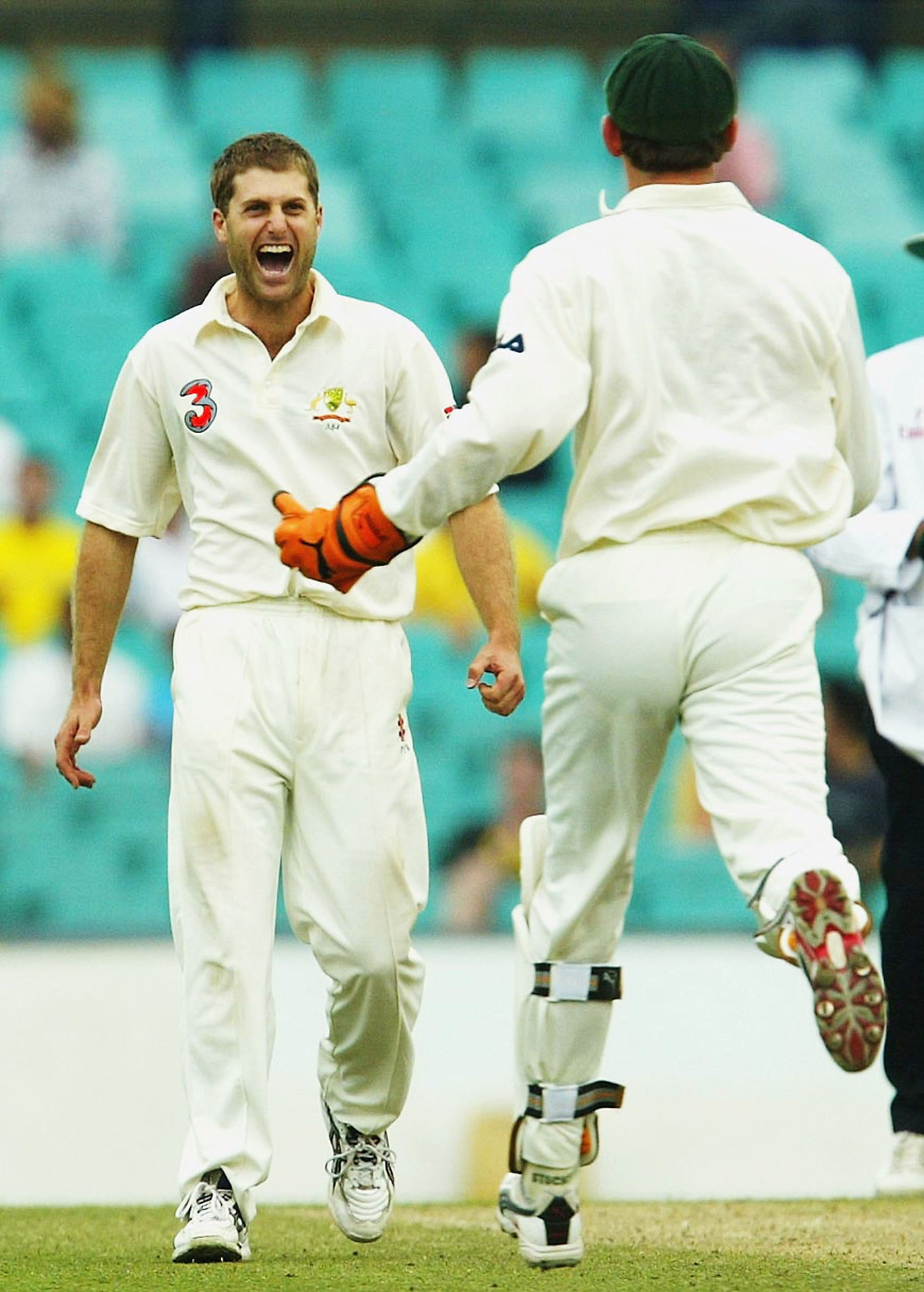 Mudassar Nazar
6 for 32 v England, Lord's, 1982
It's probably stretching the definition of part-timer to include stalwart Pakistani opening batsman Mudassar in that category - a full-time part-timer, maybe - but such are the privileges of arbitrarily setting taxonomic boundaries that you can insist that, despite averaging over ten overs per Test, the man doesn't really qualify as a full-fledged allrounder.

Mudassar's bowling prowess was honed during several seasons on nibbly pitches in north-west England, including six campaigns for Cheshire in the Minor Counties and nine with Burnley in the Lancashire League. But the day he took his only Test five-for (see, definitely not an allrounder!) and earned the nickname "Golden Arm", it wasn't a particularly nibbly surface. Indeed, his opening batting partner, Mohsin Khan, had earlier become only the second overseas player to make a double-hundred at Lord's.

Mudassar's unlikely intervention was in large part dictated by injuries to two of Pakistan's front-line attack, Sarfraz Nawaz and Tahir Naqqash, and so on he came in the tenth over, busy run-up and elegant if biomechanically inefficient delivery stride, not so much military as demilitarised medium. It must have seemed innocuous. Halfway through his second over, however, he had 3 for 0.

Derek Randall, opening with Chris Tavaré so that England could cram in six middle-order batters, played down the proverbial Bakerloo. A helmetless Allan Lamb thrust a lazy pad at an in-slanter. Then stand-in skipper David Gower gowered off to a wide half-volley on nought ("Well, what on earth did you expect me to do?" the stroke seemed to ask). Later Mudassar picked up Ian Botham, slapping to point, and Mike Gatting, caught behind cutting, before trapping Ian Greig lbw to finish with scarcely credible figures of 6 for 32 as Pakistan claimed just their second Test win over England, and their first for 28 years.

Simon Katich
6 for 55 v Zimbabwe, Sydney, 2003-04
Katich and Michael Clarke will be forever entwined in cricketing folklore as Australian top-order batters who bagged unlikely five-fers with rarely used left-arm spin in their first four Test matches. Oh, and there was that time Katich pinned Clarke to the dressing-room wall for the faux pas of trying to dash off to a restaurant before the team song had been sung.

They were temperamental and stylistic opposites too: "Pup" prowling the covers, saving one despite being about 45 yards from the bat, "Kato" under the lid at short leg, throwing himself in the way of slog-sweeps; Clarke the elegant strokemaker, Katich the crabby grinder.

Of course, Clarke's 6 for 9 against India in Mumbai - better Test figures than Brett Lee or Jeff Thomson managed, or Josh Hazlewood and Mitchell Starc so far - was pure big-budget Bollywood, although his team-mates fell over in pursuit of 107, denying it the uplifting dénouement of victory (and an entry on this list). Katich's six-for against Zimbabwe in Sydney was more a straight-to-DVD affair, coming in the wake of Matty Hayden's 380 in Perth and against frankly second-rate opposition, Andy Flower by then having entered self-imposed exile.

Still, Zimbabwe had fought hard to restrict Australia to a 95-run lead on first innings before chalking off the deficit for the loss of two wickets, at which point Katich's hairy-armed wristspin intervened. Playing his first Test on home soil, he snared the remainder of the top six, adding Andy Blignaut and Ray Price, comprehensively outbowling the team's specialist purveyor of left-arm wristspin, Brad Hogg, in the process.

Katich didn't really kick on from here, though. *In 54 subsequent Tests he only took six more top-six scalps, four of whom - AB de Villiers, Michael Vaughan, Virender Sehwag and Salman Butt - already had hundreds to their name when he dismissed them. 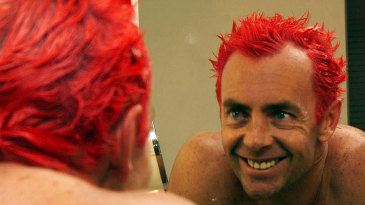 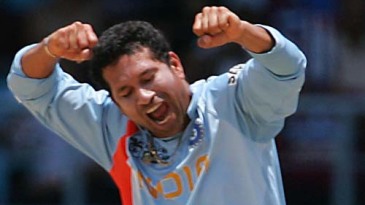