1. Ashwell Prince and Shane Warne
In the cricketing lexicon, there is of course a difference between a rabbit and a bunny: the former being someone who can't bat; the latter, someone who can't bat against a particular bowler. When people think of the Australian-South African rivalry of the nineties and noughties, it's often assumed Daryll Cullinan was Warne's chief Protea bunny, tormented to distraction and ultimately onto a psychologist's couch.

Cullinan might have averaged a paltry 12.75 in Tests in which Warne played, but the leggie only got him four times. In actual fact, it was Prince who became the bunny caught in those bright, bleached-blond headlights, falling to Warne in eight consecutive Test innings against Australia, the longest such run by anyone in the history of the game, and 11 times in all.

2. Mike Atherton and Glenn McGrath
If being dismissed by a particular bowler in Tests were an Olympic sport, then Atherton would take gold, falling 19 times in 17 Tests to Glenn McGrath. He would also take bronze - shared with himself - having been snared 17 times apiece by Courtney and Curtly. No. 18: McGrath gets Atherton c Gilchrist, the second of two identical dismissals in the 2001 Headingley Test Hamish Blair / © ESPNcricinfo Ltd

The formula for McGrath was devastatingly simple: laser-beam accuracy down a tight fourth-stump channel, nibble it either way for bowled / lbw or outside edge, then allow the stump mic to pick up Atherton's defeated "uhh" of realisation, moments before the death blow actually happened. The stranglehold was symbolic of the Australians' Ashes hegemony of the era, and even got to the stage where McGrath didn't bother to announce he was targeting poor Athers.

3. Dilip Vengsarkar and Imran Khan
Before the emergence of Indian batting's golden generation, Vengsarkar was one of the country's true heavyweights, scoring eight hundreds in 16 Tests in the mid-eighties and finishing 1987 at the top of the ICC Test batting rankings. Before that, however, he had a monumental struggle against arch-enemies Pakistan. Or rather, against Imran Khan.

Vengsarkar averaged 44.27 against Pakistan, slightly above his career figure, yet between 1980 and '83 Imran dismissed him seven times in succession. The first of those came in Madras in 1980, Vengsarkar making 17 in what proved to be his last outing of the series. Three years later, in his first six innings of the return series, Imran snared him for 3, 0, 79, 6, 1 and 4. The hex was eventually lifted with 58 not out, but by then Pakistan were 3-nil up. Last laugh: Ambrose gets Hick (yet again) in his final Test, at The Oval in 2000 John Marsh / © PA Photos/Getty Images

4. Graeme Hick and Curtly Ambrose
By the time the quiet young Zimbabwean run-machine Hick had finished his seven-year qualification for England, he had accumulated 57 first-class hundreds and was widely tipped as the saviour of English batting. His Test debut came under leaden Leeds skies against the handy attack of Marshall, Walsh, Patterson and Ambrose, and it was the last who would prove to be his nemesis.

Hick had received a Lord's final working over by Lancashire's Wasim Akram, and word was out that he struggled against the "nose and toes" approach. Ambrose tested out this theory fully. After Walsh got Hick in the first innings at Headingley, the Antiguan dismissed him in his next six innings for scores of 6, 0, 43, 0, 19 and 1, before Hick was axed, setting the pattern for the rest of his career. You're no legend to me: Anderson gets Tendulkar in the course of his 5 for 65 at Lord's in 2011 © Getty Images

5. Sachin Tendulkar and James Anderson
Sachin Tendulkar walked to the crease no fewer than 329 times in Tests. In all that time, only four bowlers managed to dismiss him on more than five occasions: McGrath and Jason Gillespie, with six apiece; Muttiah Muralitharan on eight occasions (or 1% of his Test victims); and, top of the list, Anderson, who got him nine times: twice bowled, three times lbw, twice caught behind, and twice caught in the slips. Tendulkar averaged just 32.16 in 14 Tests involving the "Burnley Lara".

One might hesitate to say it was lucky Tendulkar retired when he did, with Anderson ageing like a fine wine into his full-bodied late-career mastery of swing, but it's probably a good job Jimmy wasn't around for the first 16 or 17 years of the Little Master's career... Hafeez v Steyn, and other bunnies

Mohammad Hafeez has fallen to Dale Steyn 15 times in all international matches; in the last 12 years, no bowler has dismissed a batsman more often Not rabbits, but bunnies

Graeme Smith could barely score a run against Zaheer Khan in the recent Test series, while Doug Bollinger made Chris Gayle a regular victim in Australia. We look at other instances where batsmen have been turned into bunnies by marauding bowlers. 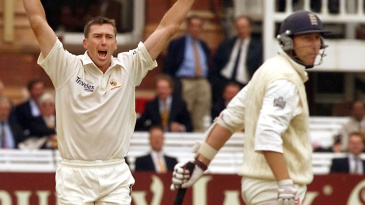 Bowlers and their bunnies

Which batsmen have been dismissed most often by a single bowler in Tests and ODIs?