Crusaders of the Cape: Shaun Pollock and Allan Donald took 116 England wickets between them in 13 Tests

Life lessons from Donald and Pollock

It was hard for England fans to watch them repeatedly dismantle Atherton and Co, but it was harder to ignore their passion and skill

The cruellest life lessons are those learned in your formative years. When you discover that adults don't always mean what they say; when you find out that Father Christmas isn't really clambering down millions of chimneys with the aid of reindeers and mince pies; when you're told you can't have chocolate pudding for breakfast, lunch and dinner.

Then, to top it all off, you go and start finding out about yourself. That's when the realisation dawns that there are people out there who are, well, better than you are. There are those who are more likeable. Taller. More athletic. Brainier. Better-looking. More entertaining. Just all-round better humans than you.

As ever, sport provides you with advance warning of this. Sport can teach you all about dealing with failure, winning with dignity, giving your all to succeed, the passing of time. It can also teach you that, as hard as you work, there will always be others who are better at it than you. Especially if you were an England cricket fan in the 1990s.

Following the fortunes of the England team in that decade wasn't just a lesson, it was an entire university of teachings and tutorials, education and preparation. This was no Dead Poets Society, though; there was no standing on desks in celebration of the joy of embracing life. It was the school of hard knocks, of poor grades and endless detentions.

Following England - and I write as someone who was aged between eight and 18 in the '90s - wakened you to that concept of never being quite as good as your peers.

Sure, we had Graham Gooch. We had Michael Atherton, Graham Thorpe, Darren Gough, Alec Stewart. But the 1990s was really all about who we didn't have: Lara, Warne, Inzamam, Ambrose, Tendulkar, Wasim, Flower, Dravid, McGrath, Kumble, de Silva, Healy, Waugh, the other Waugh ffs!

But what really rammed home the point was bowling pairs. Oh man, how I craved an English bowling pair to look up to, to imitate, to celebrate. Australia had McGrath and Warne; West Indies Ambrose and Walsh; Pakistan Wasim and Waqar; India Srinath and Kumble; Sri Lanka Vaas and Muralitharan. A duo, either fast and fast or fast and twirly, who would employ magic and metronomic in equal measure to devastating effect.

Angry Allan led the attack, clean-cut Shaun geeing him on, repeating his wisecracks. But Pollock wasn't just Robin to Donald's Batman; they were Superman and Batman

They were all simply better than what England had to offer in the '90s. Any pairing of Gough, Fraser, Malcolm, DeFreitas, Tufnell, Cork and Lewis promised some damp form of hope but rarely delivered. Against the mighty pairings of the other nations, it was puny.

Then, another lesson: sometimes life just isn't very fair. And what taught me that? The emergence of Allan Donald and Shaun Pollock. South Africa suddenly discovering a duo of menace and skill too? Just what the hell was going on here? Was this some cosmic cricket joke being played on England? What next, New Zealand?

We'd already seen Donald in England before they became DonaldAndPollock. He'd done well for Warwickshire as an overseas player, and in 1994, represented South Africa on their first tour of England since readmission. He started with a bang and a five-for at Lord's, and alongside him was Fanie de Villiers. An excellent opening pair, but not great enough to put England's Gough and Fraser in the shade. There was no reason for me to be envious.

That, however, changed from the first innings of the next series between the sides, on England's tour of South Africa in '95-96. Down on the team sheet in the first Test in Centurion was debutant Shaun Pollock, 22 and from cricketing royalty.

He wasn't thrown the new ball, though; not yet. He came on second change and took three wickets (including Atherton, caught by Donald). By the second Test - Atherton's epic unbeaten 185 in Johannesburg - Pollock was up to first change. By the third, Donald and Pollock were sharing the new ball for the first time. The partnership was born. Another duo to make a young England fan envious.

Those seeds of hate were planted and grew quickly. What really added water to my own loathing was the treatment of Atherton. And when I say treatment, I mean their rude insistence on getting him out cheaply after his heroism at Jo'burg. To me, Atherton was one of those rare things, especially since Gooch's retirement: an England cricketer to be proud of. His century in Johannesburg had been the talk of the school playground, one of the very few instances cricket infiltrated break-time chat (however hard I tried).

This felt like a turning point for me. Perhaps some of my friends would finally see a sporting hero in Atherton and join me in my cricketing geek-outs. But no. Donald got Atherton three times with the new ball in Durban and Cape Town and the window of opportunity evaporated; England were rubbish again and cricket chat was back off the agenda in the playground.

Instead I had to follow England's misery in South Africa on my own, and in particular the suffering Donald and Pollock were inflicting. With angry Allan leading the attack, clean-cut Shaun was like his smaller, more annoying best buddy - geeing him on, repeating his wisecracks. But Pollock wasn't just Robin to Donald's Batman; they were Superman and Batman. To this England fan, however, they seemed charmless: Donald the boorish brute and Pollock the Sampras-esque personality vacuum. Ugh.

It was in that duel that the hatred began to dim, and there was perhaps another lesson. Atherton and Donald, merely separated by country of birth, both giving their absolute all, both equally admirable. Where Donald once seemed boorish, now he seemed stoic; passionate rather than brutish.

And how could you not begin to admire the yin and yang of Pollock and Donald? Donald pumping, Pollock gliding; Donald the bar brawler, Pollock the silent assassin. Both were express pace at the start of their careers, and both adapted intelligently when the speed gun started to become less threatened. They were becoming impossible not to embrace.

By the time the sides next faced each other in Tests, in 1999-2000, Pollock and Donald were ranked the two top bowlers in the world and England were rated the lowest Test nation. So, naturally, England famously keeled over in the first Test, with Donald ripping out three wickets - including Atherton - and Pollock the other as England stumbled around blindly at 2 for 4.

How could you not, even as an England fan, enjoy how the pair viscerally scented blood that morning? Donald and Pollock ended that Test with 19 of the 20 English wickets - a terrifying, merciless kill. How could you not admire that? How could you not be swallowed up by the brutality, despite your allegiance? If England's role was to be the punching bag for some of the greatest bowling duos in Test history, then so be it. There were worse roles to play.

Yet, from this torched earth of the Wanderers came shoots of life for English cricket. First Caddick and Gough, then Harmison and Hoggard, then Anderson and Broad: those bowling partnerships have been savoured that little bit more for what went before. Another lesson: the good times are even sweeter when they are on the back of bad times.

There was also something about the relatively brief time Donald and Pollock spent together leading the South African attack that softened my attitude towards them. Donald, six years Pollock's senior, retired in 2002. They had played only 47 Tests together, fewer than any of their peers and about half as many as Ambrose and Walsh, Vaas and Murali, and Warne and McGrath. Yet in that brief time they burned brightly, taking 397 wickets between them.

They were better than what England had to offer, and that was a tough lesson to learn for this youngster. Every time they forced Mike Atherton into an edge behind, or they sent Graeme Hick's stumps flying, or guillotined Graham Thorpe's resistance, it hurt. But, while I and thousands of England fans were feeling the pain, Allan Donald and Shaun Pollock were enriching the sport immeasurably.

Daniel Brigham is head of publications at Norwich City FC and writes on sports. @dan_brigham For Allan Donald, the draw at Old Trafford in 1998 felt like a gut-wrenching loss 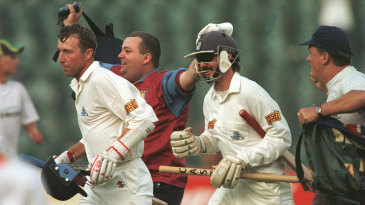 Iron Mike makes a fist of it

When Atherton produced a guts-and-glory classic at the Wanderers 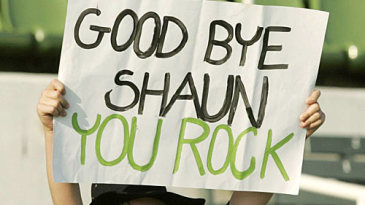 What made Shaun Pollock different to other sportsmen with an ultra-competitive streak was that he was gracious in victory and, after a few minutes to recover, equally gracious in defeat