A nation's frustrated relationship with an admirable cricketer

Younger generations sometimes see Javed Omar as a TV expert whose appearance draws laughter from their dads. Omar not only speaks about T20, he coached Rangpur Riders in the 2016 BPL, when Shahid Afridi was in their side. In Bangladesh this was comedy gold.

"What? No, really? What will he teach Shahid Afridi? How to defend the ball in a T20?"

If you experienced half the mockery Omar did in his playing career, you would take it in your stride after you stopped playing. Omar's patience was legendary, on and off the field. The cricket-watching public in Bangladesh would say the same - they had to show a lot of patience when watching him bat.

To this day, sometimes to his credit, Omar remains as important in the national consciousness as he was during his playing days. When any Bangladeshi batsman is batting slowly in a one-day game, Omar is a reference.

"Just look at how he is batting. He is bringing down the run rate, like Javed."

"He is as slow as Javed Omar."

Omar's patience was legendary. And the cricket-watching public in Bangladesh had to show a lot of it when watching him bat too

When Bangladesh are losing quick wickets and none of the batsmen, especially the openers, have shown discipline, he gets a mention.

"We really needed a Javed Omar today. We could do with his solidity."

"Bangladesh team really needs someone like Javed Omar these days. That guy really knew how to wear down the bowlers."

He spent his playing career unable to please anyone, though he tried the hardest. Now, after retirement, he starts off in conversations as a figure of ridicule, somehow gets sympathy and due for his worth, and then, like most former cricketers, is quickly forgotten.

Omar was my cousin's team-mate when they played in the Dhaka Premier League in the early 1990s. He would ruffle my hair whenever he saw me in the long driveway of my grandfather's house. Even back then it was known that Omar apparently had a technique that made him look like a "Test" player - much like Athar Ali Khan, the tall, stylish opening batsman.

Omar, though, had no style. None of my friends liked him. Stylish were Athar and Salim Shahed. Habibul Bashar was the dasher. Akram Khan, Minhajul Abedin and Aminul Islam were the heroes. Mohammad Rafique had a cult following.

But I could relate to Omar. He grew up in Bakshi Bazar at the northern tip of Old Dhaka. He played all his cricket in a part of the city I knew like the back of my hand. He ate nehari for breakfast, and sometimes tehari for lunch. Or so I thought.

I once picked up a superb fitness tip from him. He said that on the eve of an international game he would drink nine or ten litres of water, hydrating himself excessively, so that by the time he woke up in the morning he felt fresh. I tried it, and it always worked. There was no one in the Bangladesh team as fit as him, but it was hard to warm to his batting. I came close in 1998 when he bludgeoned a square cut off Javagal Srinath for four. The din at the Bangabandhu National Stadium was something else - but soon Omar was gone, lbw to Debasis Mohanty.

Omar managed to see off many good fast bowlers by dint of hand-eye coordination, even if, at times, it ended up looking askew. He often jumped in front of the ball to stop it, with his body square-on towards the bowler. There wasn't much to like in his batting - except the fact that it did the job.

Forty Tests, 1720 runs at an average of 22.05, with a century against a 2003 Pakistan attack comprising Shoaib Akhtar, Umar Gul, Shabbir Ahmed and Danish Kaneria. He is the only Bangladesh batsman to have carried his bat through a Test innings. Only Tamim Iqbal and Mushfiqur Rahim have more five-hour plus innings than him; only Tamim and Imrul Kayes have more runs among openers.

In the first seven years of Bangladesh's Test initiation, there were more woeful days than most Test sides can imagine. There was pressure from administrators, fans, the media, fellow Test nations. Amid the ruins there was a small group of performers - Habibul, Khaled Mashud and Rafique among them - who always left one feeling that they gave it their all, even in a losing cause. Omar was part of that group.

Most of his runs came when you didn't notice. Or when you were watching Habibul crash the bowlers, or a bit of Mohammad Ashraful magic. Omar was easy to ignore

Many believed his Test debut came one Test late. He should have played the inaugural Test, against India in 2000, but as it happens with the ugly ducklings, he was overlooked. Instead, pretty batsmen like Mehrab Hossain and Shahriar Hossain got the nod ahead of him. It was the story of his life: he would often lose out to the fancy Mehrab, Shahriar, or Al Sahariar (whom a selector used to call BMW, for the smoothness of his drives). They won over fans with their pretty strokeplay but when it came to the crunch were often found wanting.

In April 2001, Omar struck 62 and an unbeaten 85 against Zimbabwe in Bangladesh's first overseas Test. He had proved his worth on debut. Yet most of his runs came when you didn't notice. Or when you were watching Habibul crash the bowlers, or a bit of Mohammad Ashraful magic.

Omar was easy to ignore but always important. In Peshawar in 2003 he lasted more than eight hours to score 119. About 16 months later against Zimbabwe he erected another one of his epics, constructing with Nafees Iqbal what remains the longest opening stand in Bangladesh's history, to seal the country's maiden series win. Just to put that partnership in perspective: even the Tamim-Imrul 312 against Pakistan in Khulna in 2015 was shorter than Omar and Nafees' 142 in 83 overs back then.

The great disappointment for Omar would be how the "Test player" tag became a burden. Despite Test status being such a big deal in the late 1990s and early 2000s, Bangladesh remained a one-day country. Here, every player was judged by how useful or useless he was for the ODI side, and though Omar was the second highest run getter among openers during his ODI career, his strike rate of 51.76 is the lowest among those who opened at least ten times for Bangladesh during that period. Chalk and cheese: Omar with Habibul Bashar, one of the players whose polar opposite he was in many ways Farjana K Godhuly / © AFP/Getty Images

Omar was the right man at the right time, but in front of the wrong audience. He was, therefore, judged in the wrong way in the media, among fans and ultimately where it most mattered, at the selectors' table. Belittling Omar meant that Bangladesh's Test team was not being valued properly.

During the winter of 2013, Omar came to the Shere Bangla National Stadium for a programme. A conversation with two journalists turned towards the topic of his retirement. The younger of the two was surprised to know that Omar had never officially announced his retirement. Not retiring was his way of responding to being dropped after the 2007 Sri Lanka tour, not being told why, and never being picked again.

Within a month of that talk with Omar, the Bangladesh Sports Journalists' Association organised a retirement match for him (with his consent, of course). Mashrafe Mortaza participated, along with several former cricketers; Tamim turned up to greet him.

Omar got out early, but his entry and exit were applauded by peers, family members and critics alike. He shed a few tears that winter afternoon, perhaps finally getting the closure he so richly deserved. He had tried to please everyone for many years, with his impeccable behaviour and his homespun technique, but Bangladesh was never really convinced.

"Why are you batting so slowly? Are you Javed Omar?"

"This situation calls for Javed Omar. Now you go make fun of him."

They remain undecided about Omar, but they can never forget him. 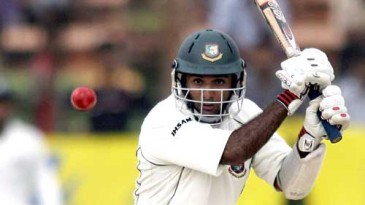 Javed Omar, the last link to Bangladesh's early days as a Test team, has retired from all forms of cricket