The defenders: in the 2018 IPL, Sunrisers Hyderabad became very adept at setting what looked like gettable totals before their bowlers, led by Rashid Khan, easily tripped up the opposition's chase

This is the second of a six-part series on styles and strategies used by Twenty20 teams around the world. Read the first entry, on six-hitting teams, here.

Teams preferring to chase has been one of the dominant trends in T20 in recent years. But if everyone wants to chase, what could be a new way of gaining an edge?

To Sunrisers Hyderabad, the answer has been to build a team that prioritises bowling, and so is particularly well-suited to defending. If a side is comfortable defending then being put in to bat becomes far less of a handicap; Sunrisers sometimes even opt to take first strike.

There are certain parallels between the Sunrisers approach and catenaccio, the Italian style of football that emphasises defence. Sunrisers like to keep games as low-scoring as possible, and the Rajiv Gandhi Stadium, their home ground, is far less conducive to rapacious scoring than, say, the Chinnaswamy Stadium, home to Royal Challengers Bangalore.

"We put a lot of importance on the 120 balls we've got to defend in the field," explains Tom Moody, Sunrisers' coach. "On wickets where it's challenging I think your bowlers are more important. You'll be able to absolutely strangle your opponents in challenging conditions and your batsmen will be able to find a way, even if it's a conservative way, to be able to make a competitive total or chase down a modest total." In the 2018 IPL, Sunrisers regularly fielded an attack of Rashid Khan, Sandeep Sharma, Bhuvneshwar Kumar, Shakib Al Hasan and Siddarth Kaul, with Mohammad Nabi also in the squad. It was regarded as the finest bowling team in the IPL, even after Billy Stanlake withdrew from the tournament with injury.

When everyone was fit, the overseas players Sunrisers favoured included Shakib, Rashid and Stanlake - three men who would reliably bowl their full allocation of overs. Their strategy chimed in with the widespread view of analysts that bowlers are comparatively undervalued in the T20 market, and thus prioritising bowling over batting is a more efficient use of funds.

"When people talk about a par score it's like a negative - as in they've only got a par score of 150 or whatever," say Moody. "What does it actually mean? You've batted to your capacity to get what you think is a competitive score. As long as you put the other pieces of your game together, in the field and with the ball, that 150 might be 20 too many - and that means it's way over par." 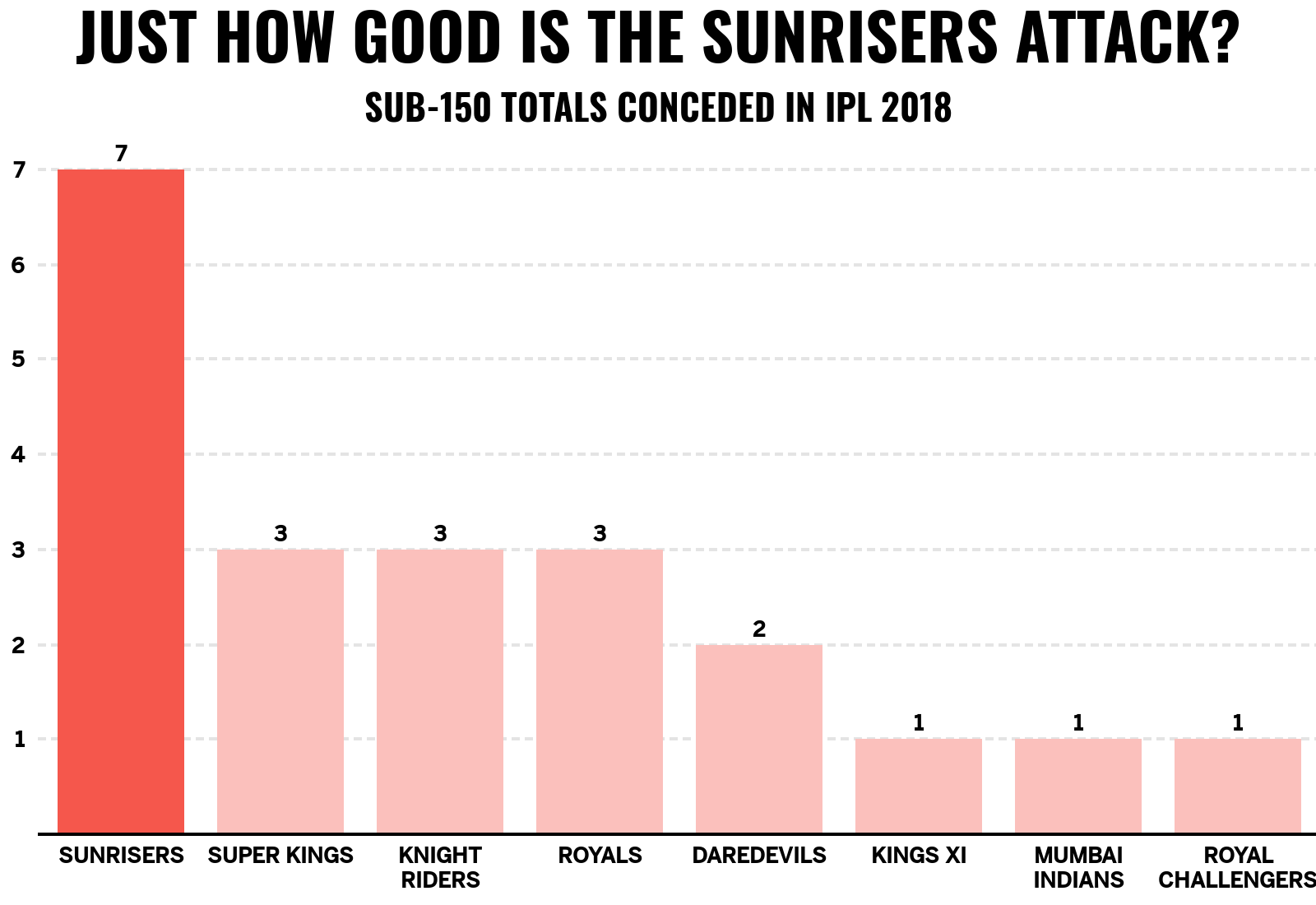 The above can also work as a summary of the tactics that helped Perth Scorchers win three Big Bash titles in four seasons from 2013-17.

"Bowlers win you games in all formats," Adam Voges, Perth's former captain, explained last year. "That's what our success has been built around. We haven't always scored 180 or 200 runs in a game, but we're the group that can defend 130 or 140." During the four seasons, Perth scored under 150 batting first nine times, and still won five of those games.

Outstanding bowling has also underpinned the most impressive run in the history of T20 international cricket.

Since the 2016 World T20, Pakistan have won 29 of their last 33 T20Is, batting first in 22 of those. They have embraced batting first - choosing to bat nine out of ten times that they won the toss in 2018 - because their bowling is so potent. In the same period, they have won an astounding 17 out of 18 games batting first when scoring 147 or more.

Pakistan's batting strike rate is far from the best in the world, but it doesn't really need to be. Their bowling attack features a plethora of high-quality spinners, led by the legspinner Shadab Khan, and a diverse pace attack, brimming with right and left-arm options alike. This bowling depth allows them to tailor their attack to conditions. Meanwhile, their fielding, essential to the effectiveness of any bowling side, mocks the caricatures. In 2018, Pakistan had a fielding impact per game of +4.9 runs, CricViz recently detailed in Wisden Cricket Monthly. The second best team was England, with a figure of +1.1.

In T20 leagues, there is one cricketer who is the standard bearer for defending targets: Rashid Khan, with his marriage of low economy rate and low strike rate. Again and again, he has proved phenomenally successful around the world: Adelaide Strikers won the 2017-18 Big Bash, Rashid's first season there; Sussex - like Adelaide, coached by Jason Gillespie - were finalists in their T20 competition in 2018, as were Sunrisers. Adelaide made for a particularly intriguing study: all six times in the tournament that they won the toss, including the semi-final and final, they chose to bat. They trusted Rashid, Peter Siddle and Ben Laughlin to defend any total.

While such teams are defined by their bowling, they also tend to have certain batting traits in common. Because they do not need as many runs on the board, they are inclined to bat in a way that reduces risk - preferring a high activity rate over a high six-hitting percentage, especially in the first 15 overs.

Kane Williamson was the perfect emblem of Sunrisers' batting approach in 2018. Many IPL teams did not particularly value Williamson as a T20 player, which is why he went for Rs 3 crore in last year's auction - under 4% of the total amount Sunrisers were permitted to spend. Williamson ended up the top run scorer in the tournament, scoring a half-century virtually every two innings.

"You want your business end to be of high quality but you don't want them all swinging from the hip because the law of averages will indicate that they're not always going to come off," Moody explains. "If you've got a balance of players who like to bat deep and may operate at a slightly lower strike rate complemented with guys that are naturally instinctive, I think that's the ideal balance."

No strategy is inoculated from risk. A bowling-dominated team can be vulnerable on the best batting tracks: in 2018, Sunrisers lost six of the seven highest-scoring matches they were involved in. Even the best bowling teams are not immune to the imbalance in T20, where a batsman can bat the entire innings while each bowler is limited to 24 balls.

Yet, all things considered, bowlers are not mere condiments to a successful T20 side. They are, rather, the main substance. Here, for all their profound differences, is a fundamental continuity between T20 and Test cricket. No other team in this year's IPL has their depth of bowling resources, but are they already one of the best T20 attacks of all time?