One amazing escape in a do-or-die game, fine - but two? Warne and friends did it against West Indies in 1996

What happened
Having elected to bat on a pacy Mohali wicket, Australia discovered their decision had played right into West Indies' strengths. At 15 for 4, they had lost a significant portion of their batting: Mark Taylor, Ricky Ponting, and the Waugh brothers. The relatively inexperienced Stuart Law and Michael Bevan had to do the steadying, and their 138-run stand set Australia up for an Ian Healy cameo that lifted them to 207 for 8.

West Indies remained in sight of a first World Cup final since 1983, thanks to opener Shivnarine Chanderpaul, whose 80 was the glue in the chase. Brian Lara and Richie Richardson batted around him to bring them within 43 runs of a win, with eight wickets still in hand. But Chanderpaul's dismissal at that stage was followed by the promotions of Roger Harper and Ottis Gibson, and when they fell quickly, the pressure was too much for the regular batsmen Jimmy Adams and Keith Arthurton. Eventually, Richardson was stranded on 49 as Shane Warne's four-for helped Australia snatch a last-over win.

Why it was great
For an Australian team in the 1990s or early 2000s, touring India was a big deal. They could not understate then, and even in autobiographies later, how difficult it was to not just adjust to the heat but adapt to its variants across a diverse terrain. In the face of that, and of two losses in the group stages - including to West Indies - it was a sublime effort from Australia to bounce back twice in the same match. And while they didn't go on to win the tournament, an almost identical team claimed the following one. Among the players who would become cult figures over the next decade was Warne, who would go on to similarly strangle South Africa in the semi-final of the next edition.

They said
"I had Stuart Law caught off a no-ball. I think he flicked one to midwicket. On reflection, that would have been a significant breakthrough. Even now, it's very disappointing on my part that I couldn't keep my foot behind the line, given the situation Australia were in at the time."
- Ian Bishop reflects on a crucial moment during Australia's recovery 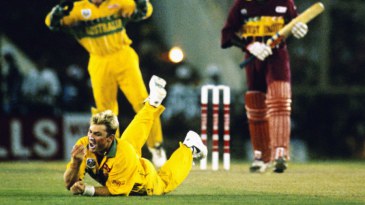 'How the bloody hell did we win that?'

West Indies had the 1996 semi-final against Australia in the bag. Then they found a way to throw it away