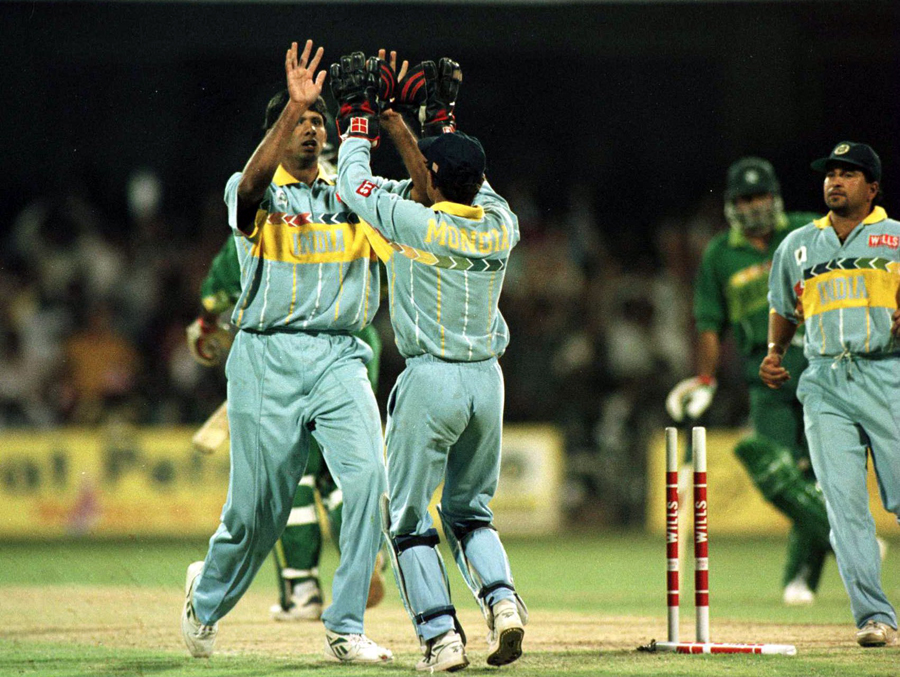 Tit for bat: Venkatesh Prasad responded to Aamer Sohail's taunt by uprooting his off stump

When India met Pakistan in a World Cup knockout, sparks were expected to fly - just not these many

What happened
Defending champions Pakistan had eased through the group stages. India had a harder time, with losses to Australia and Sri Lanka. But now India were playing in front of a partisan crowd, of over 55,000, that had commentator Sunil Gavaskar remarking that he had seen "nothing quite like this before". And Pakistan were without their captain Wasim Akram because of injury. Aamer Sohail led in his stead.

Despite opener Navjot Singh Sidhu's fighting 93, a slow-burn middle-overs period put India on course for a middling total. Only a late blitz - 51 runs off the last three overs, powered by Ajay Jadeja's 25-ball 45 - carried them to 287. In response, Pakistan's openers racked up 84 off the first ten overs, before twin strikes from India's seamers slowed things down. Pakistan needed much less than a run a ball, but their chase flagged as India's spinners applied the choke. Veteran Javed Miandad stuck around with a 64-ball 38, but there was to be no late assault nor last-ball six this time round.

Why it was great
A mention of "1996" and "India-Pakistan" evokes two mental images: Jadeja carting Waqar Younis for boundary after boundary at the death to turn the game on its head, and the now-legendary stoush between Venkatesh Prasad and Sohail in the middle of the Chinnaswamy pitch: one delivery after Sohail had charged down the pitch, smashed him to the point fence and followed it up with a taunting gesture with the bat, Prasad retaliated by bowling Sohail out and adding on an angry sendoff.

It was a landmark fixture in other ways too: Pakistan were travelling to India for the first time since 1989, having never faced their rivals in a World Cup knockout game before. It also turned out to be Miandad's final international game, the end of a 22-year career spanning a record six World Cups. As with so many other' 90s games, the sonic boom from Tony Greig's microphone provided a belting soundtrack to the on-field action.

They said
"Javed [Miandad] actually taught us over the years, when a bowler is troubling you, just break his focus a little bit. Venky kept his focus and doing what he did, [while] I was actually expecting a bouncer"
- Aamer Sohail on the wicket-taking ball from Venkatesh Prasad (in a 2018 interview with Star Sports)

Srinath Sripath is a sub-editor at ESPNcricinfo 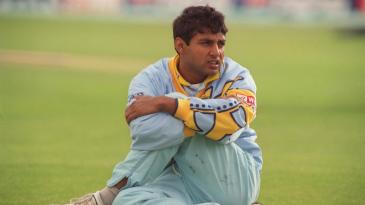 The plunderer - Jadeja's 22-run over

Ajay Jadeja entered a different zone late in the first half of the World Cup quarter-final, and successive Waqar overs went for 18 and 22 as India spurted to 287 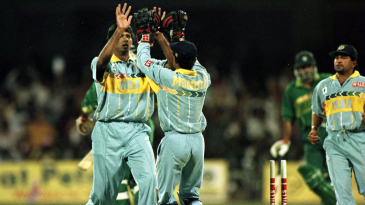