Bob Willis talks about his Ashes stints, bowlers today, and why World Series Cricket was good for the game

Frank Keating, dear departed of the Guardian, once said of my run up: "Willis is like a World War I biplane tied up with elastic bands, vainly trying to take off."

As a commentator I'm hard on mediocrity in the Test match arena. I'm happy to admit that.

Would I enjoy bowling today's batsmen? Apart from the financial benefits of playing in the leagues around the world, the answer is probably no. The size of bats and improvisation in strokes have revolutionised batting.

In the World Cups when I played, five runs an over was thought to be a pretty remarkable run rate.

There should be three divisions of county cricket and the best cricketers in the country in the best six sides. Ten matches a year, with England players available for about three quarters of those games.

The public are entertained by fours and sixes, but the bowlers need to fight back.

Australia got to 56-1 [at Headingley in 1981]. Beefy had got Graeme Wood out. Then we picked up three wickets just before lunch: Trevor Chappell, Kim Hughes and Graham Yallop. That's when the balance of power changed. You could feel the pressure going off us and onto them. And although it was a very small total to chase, the wicket was starting to misbehave.

Many of the [English] Packer players were openly ostracised. Dennis Amiss had a very rough time in the 1978 season, back at Warwickshire. Mike Smith and Alan Smith, establishment figures, were involved with the club, so Warwickshire's stance was very much anti-WSC. There was a lot of hostility for about 18 months.

You used to be able to set a field for a right-handed batsman and you knew he was going to bat right-handed.

Bowling in limited-overs cricket these days needs to come with a health warning When I first played limited-overs cricket, in the Sunday League in 1969, you thought you'd had a good day if you went for under four an over off your eight overs. Once, we made 143 off 40 overs and that was a winning score on a flat batting track.

I don't consider someone who averages in the low thirties a Test match batsman.

To concentrate the power in the best six teams in a premier division would increase the talent available to England.

There's too much - sledging is too kind a word for it - personal, vindictive baiting of players in the middle, a travesty for the game. And I hope the authorities will stamp on it very hard indeed. I always thought that sledging was a complete waste of breath, and I don't really understand why normal, run-of-the-mill sledging should worry any top-class cricketer who has got into the Test side. Being told that you're no good, couldn't hit a barn door with a banjo when you're bowling, wouldn't bother anyone. But some of the stuff in recent years we could do without. Lillee and Marsh (flanking Greg Chappell) liked a word out on the field. "But it wasn't personalised, vindictive and hurtful comments" © Getty Images

Geoffrey Boycott wasn't a bad captain, but he was pretty conservative and always obsessed with his own performance and perfection in that department. He was never going to be a man-of-the-people captain.

Early- and late-season conditions in England help the bowlers, and the ball does too. But the leading county wicket-taker in division one or two aren't necessarily knocking on the Test match door, and that is a worry.

I remember we had fairly extended phone calls with [chairman of selectors] Doug Insole back in England, when Kerry Packer said he would release his World Series players to come and play for Pakistan in the Karachi Test Match. We thought that this was grossly out of order. In the end they didn't play.

Dear old Fred [Trueman] and Brian Statham were a brilliant combination of bowlers. I'm happy to say, so were Botham and Willis. But Stuart Broad and James Anderson have surpassed that terrifically. They have been great bowlers, and I don't use the word "great" about cricketers very often. Their achievements have been extraordinary.

I don't mind the strong underpinning the weaker counties financially. I don't want to see counties go to the wall. I do want to see competitive, top-quality cricket in a premier division.

The West Indies in the mid to late '70s were pretty awesome. Four out of six world-class fast bowlers. Marshall, Michael Holding and Andy Roberts - three of the greatest bowlers that there have ever been. Put Joel Garner into that mix, with Colin Croft. And then the likes of Wayne Daniel and Sylvester Clarke and Ezra Moseley not being able to get into the side.

"A few years earlier I'd been pretending to be Cowdrey, D'Oliviera, Boycott and Edrich in the back garden with my brother. And there I was in amongst them"

There's a plethora of Chris Woakes-style seam bowlers who'll always be effective in England because of swing and seam, but totally ineffective on overseas pitches, as we saw in Australia last time, whether it was Tom Curran or Craig Overton.

There were players in the England side of the late '70s who, without those defections to World Series Cricket, would never have played Test matches. We relied on four or five players.

I am very critical of people who pick up wickets on helpful pitches in England, but who can't get anyone out abroad.

My Surrey team mates Robin Jackman and Geoff Arnold were better bowlers than I was at that time. But [Ray] Illingworth wanted pace in his Ashes squad after Alan Ward got injured. His senior professional, John Edrich, also at Surrey, persuaded him to give me a try.

The likes of [Dennis] Lillee and [Rod] Marsh were two who liked a word, when I played. It was very hard and it was unpleasant. But it wasn't personalised, vindictive and hurtful comments. They may say how fortunate you were to be in after an over of 98mph bowling. Or that you had more edges than a broken piss pot. I don't call that particularly offensive. But if you start talking about people's families, wives, girlfriends, sexuality - that is beyond the pale. Players should be immediately banned for that.

Those terminally in division three - the likes of Leicestershire, Gloucestershire and Glamorgan - there shouldn't be any disgrace in that. There's no disgrace being in the football Championship or League One. It's just a fact of life. Oldham and Rochdale aren't going to be Manchester City or United. I was against World Series Cricket at the time, but my opinion has since changed. Clearly it was what cricket needed. Two hundred and fifty thousand people watched the Centenary Test and the Australian players were paid $250 for their efforts. Our pay went from £275 per Test to £1000 overnight. So [Packer] did everybody a favour in the end.

The guru, Mike Brearley, famously said that he thought Chris OId's batting was better than Beefy's.

England have too many bowlers running up, bowling fast-medium, not getting the ball off the straight. It isn't going to get top-class Test match players out.

Warwickshire looked after me, during World Series Cricket. They gave me a longer term contract and promised to compensate me, financially, if my career ended because of injury.

A few years earlier, I'd been pretending to be [Colin] Cowdrey, [Basil] D'Oliveira, Boycott and Edrich in the back garden with my brother. And there I was, in amongst them.

Until 1974-75, the England batting line up - Boycott, Edrich, [Keith] Fletcher, D'Oliveira and a few others - did pretty well in all conditions. Until 1974-75, when those who went back to Australia found out that life had moved on a bit.

A few years earlier I'd been pretending to be Cowdrey, D'Oliviera, Boycott and Edrich in the back garden with my brother. And there I was in amongst them.

The only reason I became captain was because of the South African rebel tour [1981-82]. [Graham] Gooch would have probably been made captain if he hadn't gone on that. [David] Gower was a bit young, Botham had already had a go and it didn't suit him or his game. There weren't many choices once [Bob] Woolmer, Amiss and Boycott had gone off to South Africa; there weren't many senior players left to pick.

The 1970-71 side was the strongest England side I played in - with Illingworth, an allrounder, at six, [Alan] Knott at seven and [John] Snow at eight. [Derek] Underwood, [John] Lever and Willis after that. The batsmen really had to do their jobs and did so consistently.

When I started playing for England you had people sitting on the grass at Lord's and the boundaries weren't that big, either.

Our Ashes wins in the late 1970s were against distracted or pretty sub-standard Australian sides. In 1978-79, we played Graham Yallop's Australian 3rd XI for the Ashes.

Peter May wanted a disciplinarian captain to curb some of the excesses of player behaviour.

Illingworth knew that pace would win the Ashes.

At the World Cup you should have the biggest boundaries you can. You want to encourage slow bowlers, and batsmen to take on the bowlers and not mishit them for six. Willis flanked by Geoff Miller and John Lever (left) and Graham Roope and Derek Randall: "Our Ashes wins in the late 1970s were against distracted or pretty sub-standard Australian sides" © Getty Images

I didn't play in the 1976 Old Trafford Test on that pitch, which was pretty gruesome. But overall, no one was quite in so much fear of their lives against the West Indies as they were against Thomson and Lillee in 1974-75.

Brearley left me to my own devices. Said, don't worry about bowling no-balls, just run in and bowl as fast as you can

I was just a bit part player in 1970-71, thankful to have played in those four Tests.

A lot of the sixes, today, the ball isn't being hit 70 metres, more like 90 metres. Wouldn't matter what size the boundaries are.

On my first Ashes tour, I was on an economy flight that stopped five times on the way to Brisbane.

In 1979, I got injured in the World Cup semi-final and missed the final against the West Indies. 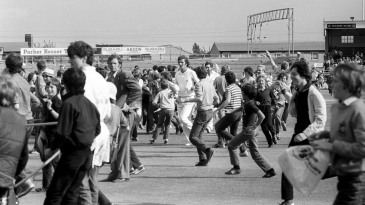 Thirty-five years ago at Headingley, Bob Willis bowled England to an incredible Ashes win - the culmination of a golden five-year period for him 'People don't realise how hard it is to win in Australia'

Ray Illingworth looks back on leading England to a hard-fought Ashes win in 1970-71, and dealing with Aussie crowds and umpires The hero who almost didn't play

Bob Willis, one of the heroes of Headingley 1981, wasn't even in the original squad picked for the Test