Hat attack: Richie Richardson's flamboyant strokeplay was made even cooler with his maroon wide-brimmed hat

Whether you're a fashionista or not, the clothes you wear reveal something about your personality. On the cricket field, where everyone is kitted out the same, and every modern (male) player has a bunch of tattoos, snazzy shoes 'n shades, and basically the same facial hair, one way to express your individuality is with the throwback floppy hat - worn throughout cricket history as much for comfort as for swagger. Here are five who wore it best (although the timing of one is a real head-scratcher).

Richie Richardson
Richardson started his international career in 1983, batting in a cap, and it was not until the late '80s that he switched to a wide-brimmed maroon hat. The swap coincided with Richardson's peak with the bat, and eventually, the sight of him hooking fast bowlers in his floppy hat became a symbol of the fearless brand of cricket West Indies were renowned for.

At its zenith, Richardson's wide-brimmed hat was so popular that it featured in a sketch in an Australian late-night comedy show.

Helmets were in common use by then but Richardson didn't feel comfortable wearing one, not even when he was hit in the face by an Ashantha de Mel bouncer during the 1985 Benson & Hedges World Championship. Batting in his maroon cap then, Richardson spat out a mouthful of blood and was forced to retire hurt.

In 1995, in the home series against Australia, with West Indies 1-0 down, he came out to bat in the second Test, not in his famous floppy but a helmet. West Indies went on to suffer their first series loss in 15 years; Richardson's switch to the helmet marked the end of their dominance in world cricket.

The hat Richardson wore at the time of his retirement, signed by the likes of Desmond Haynes, Viv Richards, Garry Sobers and Everton Weekes, now hangs on his bedroom wall, "looking at me while I sleep at night," he told the Sydney Morning Herald in 2012. Can't get you off my head: Jack Russell wore the same hat for virtually all his career © Getty Images

Jack Russell
Except for his debut, Russell wore the same white hat throughout his first-class career while keeping wicket, often with his collar up and sunglasses on. "It's washed twice a season, and to dry it, I use a glass biscuit jar, a tea cosy and a tea towel," Russell wrote in his autobiography. "The hat fits on top of all three, and is then, after starching, placed in the airing cupboard, thereby keeping its shape." But in 1994 in Barbados, in an attempt to dry it faster, Russell put his hat in an oven, ending up charring it.

Two years later, the organising committee of the 1996 World Cup decreed that Russell wear coloured headgear to go with England's blue jersey. He refused and threatened to walk out of the tournament. After frantic fax exchanges between Calcutta and London, headed "Jack Russell Hat Crisis", the World Cup technical committee allowed Russell to wear his white floppy.

When Russell retired in 2006, his former captain Mike Atherton described his hat as a "dirty, smelly, grubby, patched-up, stitched-up, upside-down-flowerpot-of-a-thing". Atherton had reason to loathe it as it was the cause of many confrontations with the suits. In 1998, then ECB chairman Ian MacLaurin asked the players to wear the blue England cap for every game of the West Indies tour, but Russell would not budge. After multiple meetings, it was agreed that Russell would trim the issued hat to his comfort. For his final ODI, however, Russell did manage to pull off a hat-trick. He stitched a blue hat over his original and said goodbye to international cricket on his own terms. Sultan Zarawani
A rampaging Allan Donald had just taken his third wicket, reducing UAE to 68 for 6 in their chase of 323 against South Africa in Rawalpindi in the 1996 World Cup. In walked UAE captain Zarawani, to face Donald, in a wide-brimmed floppy hat.

On seeing Zarawani come out in a hat rather than a helmet, Pat Symcox told Donald to knock some sense into him. Donald obliged, hitting Zarawani right on the head with a bouncer. Upon impact, the hat flew past the stumps, and the ball over the backward point fielder. Zarawani was understandably shaken, but he just rubbed his head, picked up his hat and got ready to face the next ball. He lasted six more balls but couldn't get off the mark and was taken straight to a hospital for a check-up after his innings.

"It was just a very good bouncer, it bounced just right in front of me," Zarawani was quoted as saying in the book Second XI: Cricket in its Outposts. "It just grazed my head, it didn't hit me bang on. It looked bad, it shocked me a bit, and I was a bit nervous afterwards. I was more camera conscious than worried about being hit by Donald." 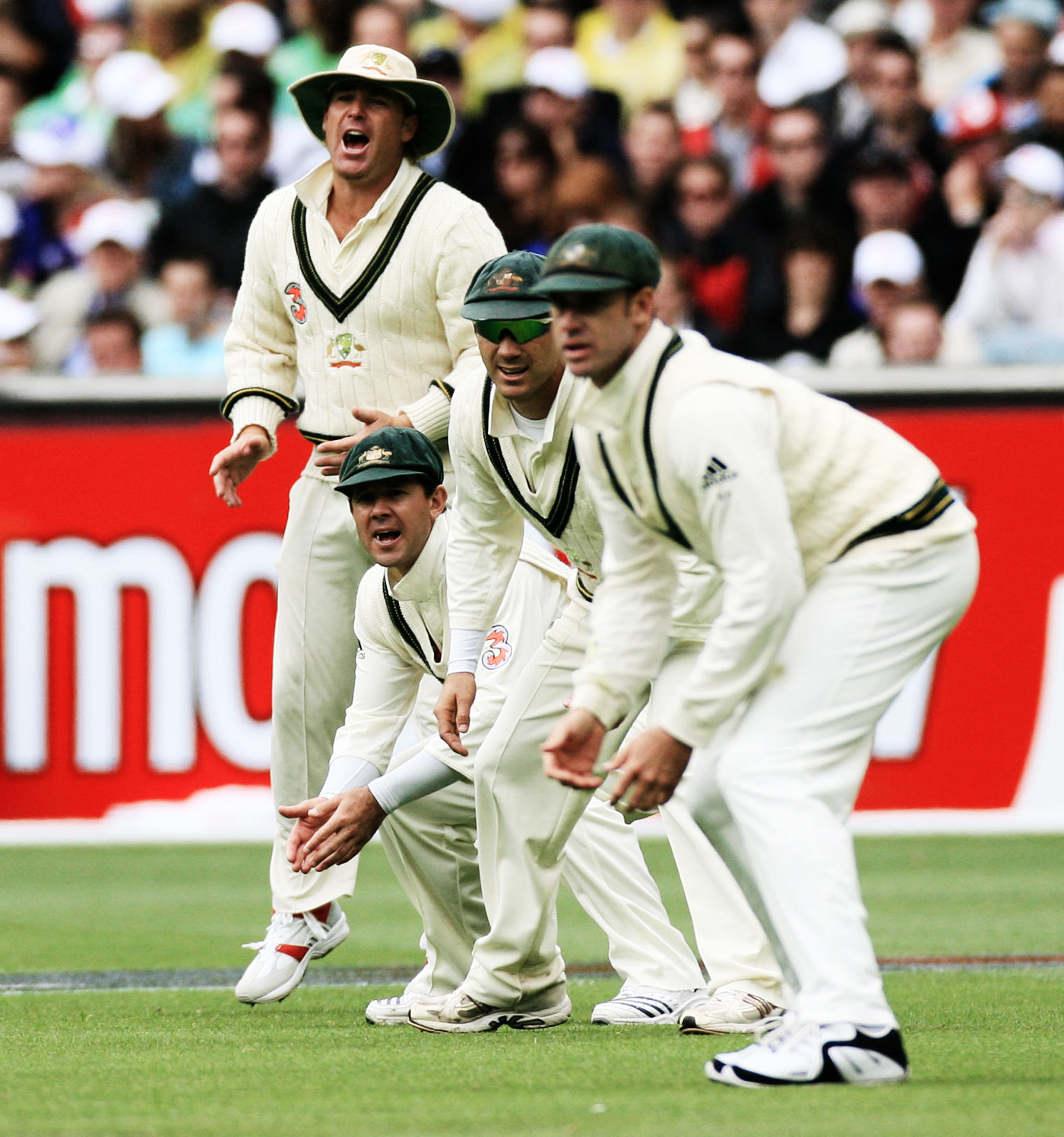 The floppy among the baggy greens: Warne sports a lone hat in the Australian slips, 2006 © Getty Images

Shane Warne
One of the iconic images of Warne is of him standing at first slip, looking into the distance between deliveries, chewing gum. Hands behind his back, feet crossed, wearing shoes with red stripes. On his head is a floppy hat. Always a floppy hat.

Wearing the baggy green is a matter of pride for many Australian cricketers - to the point of wearing it when at Wimbledon. Not for Warne, who didn't like the "baggy-green worship rubbish". The floppy hat was his default headgear while fielding. Many other Australian players liked wearing the floppy, but Warne was particularly memorable in it. As his Test career came to a close, you often saw him doff his hat to adoring spectators, in Australia and elsewhere.

"I'll bust my gut for my country on the cricket field, but I won't wear the cap because I find it uncomfortable - I'll wear my sun hat, thank you," Warne wrote in his autobiography No Spin. Mithali Raj
The first visual memory I have of Raj is a full-page photograph in an issue of Wisden Asia Cricket magazine, taken during her then world-record 214. The 19-year-old is shaping up to play on the leg side in a half-sleeve sweater and a dark blue floppy hat.

Raj's reason for preferring a floppy is more practical than anything else. Her skin is sensitive and the hat protects her better from the sun than a cap.

It also helps in other ways. "If I wear a floppy hat, it triggers something in my mind," she said. "I kind of switch on my mind. I am so used to wearing the floppy hat that I tend to see the ball much better than when wearing a helmet."

On India's 2006 tour of New Zealand it was so windy during one of the ODIs that Raj's hat flew off a couple of times while she was batting and had to be retrieved. New Zealand captain Haidee Tiffen was not best pleased at the delays. Eventually Raj herself decided to get a helmet on, fearing the hat might dislodge the bails if it landed on them. 'You need to be brave to stand up to the stumps'

The former England keeper on his reputation as an eccentric, England's bright young keeping talent, painting, and his plans for a military funeral