The brat, the bully, the bleedin' Aussie bogeyman

For an England fan, it was hard not to feel antagonistic towards Ricky Ponting however much you liked his belligerent batting

How much did I ever hate Ricky Ponting? John Arlott once warned against "taking sport too seriously and life not seriously enough", and I've always been more of a lover than a fighter besides. It's probably truer to say I used to mildly dislike Ponting for being a periodic block on my enjoyment of following the England cricket team. Intensely mildly disliked, though, if that's not too much of an oxymoron for you. The kind of buttoned-up English opprobrium that manifests itself in loud tutting accompanied by the occasional frown.

So much about Ponting seemed designed to rub England fans - or any opponents of Australia, really - up the wrong way. From blue-collar roots but nevertheless a gilded youth who made 96 on Test debut (and was left close to tears by a duff lbw decision), "Punter" enjoyed a flutter as well as a drink - vices that contributed to him jeopardising his career in its early stages. He played with a snarl and a front-foot aggression that put him forever on a collision course with those in his path.

RT Ponting, middle name "Trouble" (if it wasn't actually Thomas). The frankly appalling Cardinal Richelieu goatee sported on that first appearance in Perth told you as much, and although it had gone by the time he did reach his maiden Test hundred, on the Ashes tour of 1997, there was still something about the gimlet-eyed intensity of Australia's newest batting scion that was deeply unnerving.

England had taken a riotously unexpected lead in the Ashes that summer - we heard of Nasser and Thorpe's Edgbaston heroics while at school from a games teacher running across the playing field to deliver the news - but soon the series was heading in a familiar direction. The Headingley Test is one of the first I remember watching on TV, and although it is Matthew Elliott's 199 that sticks in the mind more clearly, Ponting had also marked himself out in my book as an Ashes blackguard-in-the-making after helping to rescue Australia from 50 for 4.

The episode at the Bourbon & Beefsteak bar, followed by young Punter's public, black-eyed mea culpa, was still to come, along with changes to his approach to life away from the game. But while mild behavioural reforms ensured his continued progression towards the Baggy Green pantheon, there was no debating that Ponting was the sort of cussed, irritating, downright provocative on-field competitor that rivals hated as much as they rated. 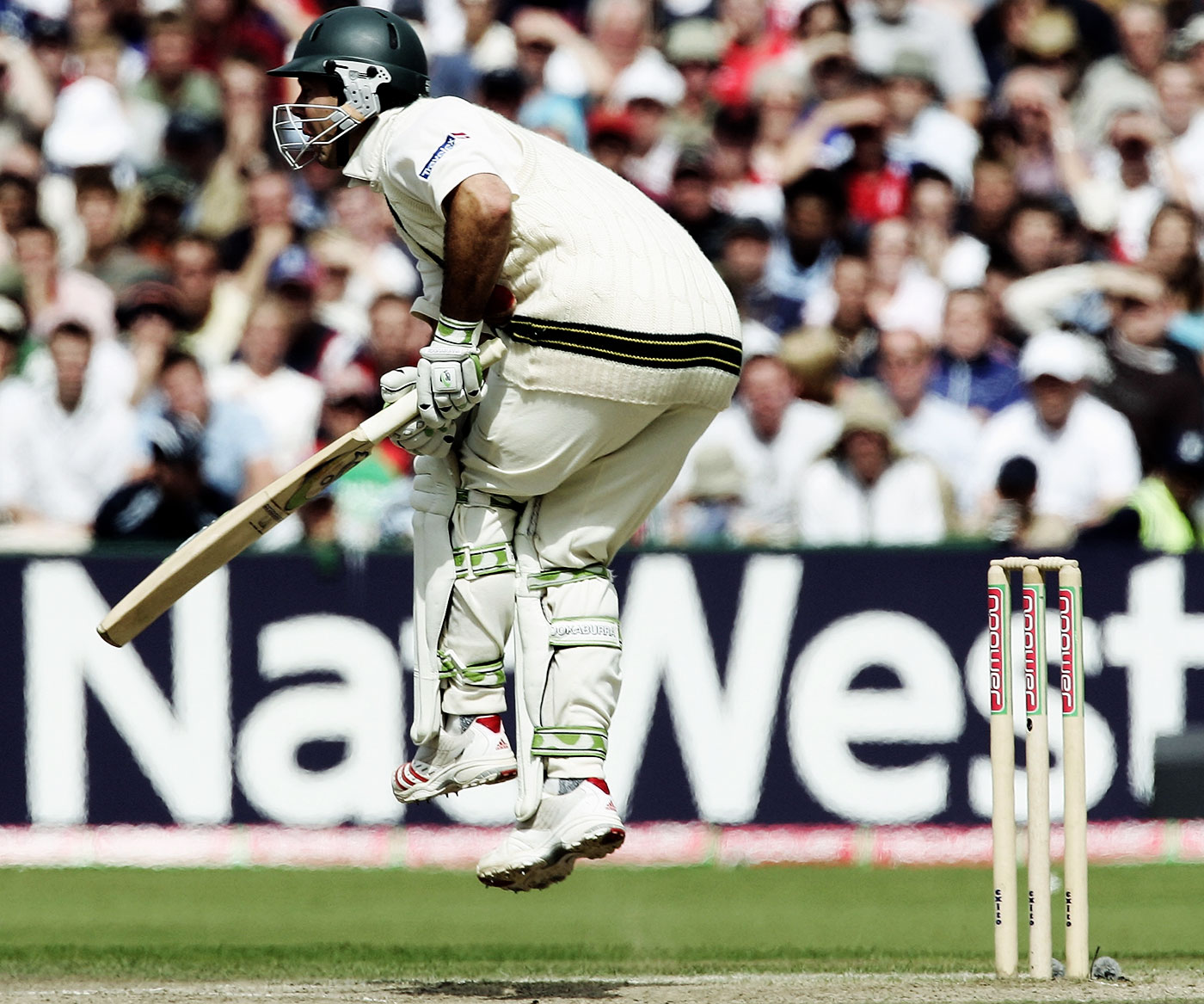 Gut punch: in 2005, Ponting became the first Australian captain to lose an Ashes since 1986-87, but not before he had fought hard to score a century and draw the Old Trafford Test © Getty Images

He was also the perfect backyard bogeyman, the embodiment of Aussie antagonism whenever my brother and I played tennis-ball cricket up against the garden gate. "Here's Pun-tah," one of us would drawl, those two syllables frontloaded with intent. A scowl, a crouch, an elbow-high forward thrust. "Howazeee???"

Once given the responsibility of captaincy, he was seemingly no better. Steve Waugh's Australians had gone in for "mental disintegration", whereas the team led by Ponting were nothing like so subtle. The periodic flare-ups - Ponting's Trent Bridge tirade towards the England balcony in 2005 after being run out by substitute fielder Gary Pratt, or the venom directed at 12th man Bilal Shafayat over perceived time-wasting in Cardiff in 2009 - betrayed an ugly, bullying streak. It was even too much for some nominally on the same side, as in 2007-08, when the headline in the Sydney Morning Herald declared "Arrogant Ponting must be fired" after relations with the touring India side turned rancorous.

In England, he became a kind of pantomime villain, as demonstrated by the way he was repeatedly booed by crowds during the 2009 Ashes. And yet, at the point he seemingly came to symbolise everything that was wrong with the cricketers who represented 'Straya, I began to find myself sympathising with the old cove. "Whenever I walk out of the changing rooms, I'm half-expecting it," he said. "I'm thinking: 'Right, let's get it out of the way, get the booing done, and then I'll start building my innings.'" Not so much a Tasmanian devil, the deserving object of righteous anger, but a bloke who knew that sporting passions run high and was happy to cop it sweet when he had to.

Purely as a batsman it was impossible to begrudge him his due, whether it was for the percussive power of his pull shot or the way he leapt from the crease to defend his territory like a particularly belligerent mongoose (Ricky-Tikki-Tavi, of course). Personally I couldn't help but like the Cantona-esque upturned collar, having adopted that as a sporting style choice myself.

In resisting for almost seven hours on the final day at Old Trafford in 2005 - all but 5.1 overs of the 98 England bowled in pursuit of victory - Ponting earned more than just a nod of respect from us lot, even if Australia's delight at escaping with a draw betrayed the overall shift in fortunes. More painful was his century in Adelaide 18 months later, having been dropped on 35 by Ashley Giles. Waking up to the full Macbethian horror of that result on a December morning in North London is a scar that still twinges when the weather gets cold. Not one of the boys: Ponting has become an incisive and insightful commentator, in contrast to many who populate Australian boxes these days © Getty Images

Ultimately Ponting's record against England wasn't that formidable - he averaged more against every other country. But it was batting that revealed layers to his character. Punter was human too; if you cut him - as Steven Harmison did at Lord's, forcing the helmet grille into Ponting's cheek to leave a mark that remains today - did he not bleed? He ended the 2009 tour, on which he became the first Australia captain to lose twice in England since Billy Murdoch in the 19th century, with a split lip too, courtesy of a ball to the face while fielding down in the dirt at silly point.

The grizzled face of late-stage RTP hinted at regret, mortality - wisdom, even. His was still the wicket you wanted, enough to have you cackling manically to yourself while listening to the 2010-11 Adelaide Test in bed, after an impetuous push at his first ball had left Australia 2 for 0. "It's happening. It's bloody well happening!" For some reason my girlfriend opted to go to sleep rather than savour the news that Ricky Ponting had just made a golden duck on the first morning at that ground.

When time eventually caught up with his reflexes, and that same old lunge on to off stump only resulted in him being brought to his knees by the fast-medium of Jacques Kallis, it was possible even to feel sorry for him. No fairy-tale ending, either. Just a press conference in the windowless WACA gym, followed by a pair of single-figure scores under the harsh glare of the Perth sun. His last dismissal came against a left-arm spinner at the spiritual home of fast bowling. Time to pack it in, Rick.

After his retirement came further revelations. Here was a cogent and thoughtful contributor to Australian cricket's media landscape - which increasingly seems to be an environment about as hospitable to intelligent life as the outback. A sharp observer in the BBL commentary box, capable of handling a touch screen as well as gently winding up Kevin Pietersen throughout a 20-minute on-air interview, Ponting quickly demonstrated he wasn't from the Tubby, Slats and Heals school of analysis.

As a pundit, the mind is as nimble as the footwork of old. His recommendation that the Dukes ball be used in Sheffield Shield cricket has helped Australia retain the Ashes in England for the first time in nearly 20 years. There have been forays into coaching, too, characterised by good humour, straight talking and a recognition that the learning goes both ways - no trace of arrogance here. Throw in his clear enthusiasm for and interest in the game and you've got the complete package.

It's certainly enough to overcome this Englishman's reserve. Still boyish in his mid-40s, Ponting hasn't changed all that much since we first saw him all those years ago; but where those narrowed eyes once signalled hostility, there now seems something almost cherubic. Maybe age has softened us both. How much do I love Ricky Ponting? Aw, look… 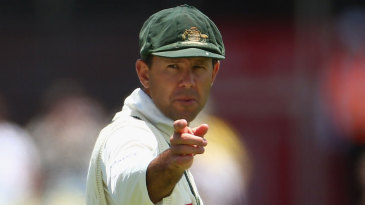 One scrapper to rule them all

Ricky Ponting was the last person you wanted to spite. If you tried, you were in for a pasting 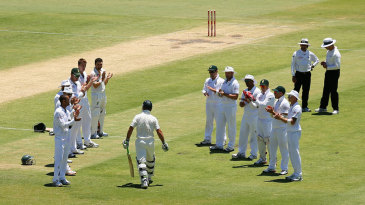 The very essence of desire

To one Australian captain, winning was the main thing - and so it remained for him till the end 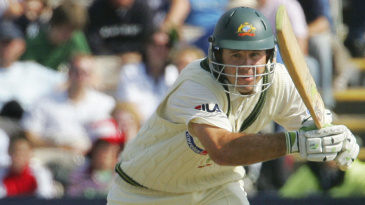