The best of the best: Michael Holding takes a catch off his own bowling, watched by Jeff Dujon behind the wicket and Viv Richards at second slip

Mike Whitney's 12 Tests and 38 ODIs for Australia between 1981 and 1993 included clashes against star batsmen like Ian Botham, Viv Richards and a young Sachin Tendulkar. Here he picks the best team of red-ball cricketers he played against across his career with Australia, New South Wales and Gloucestershire.

David Boon
Uncompromising, all the shots, great game management, hard to bowl to. The sort of bloke you want in your side. Tough competitor. Quietly spoken until you get to know him, and then he's a really funny man.

John Wright
Fabulous bloke in the dressing room after the game. Wouldn't leave until the last beer was gone. He loved telling stories and hearing stories, and played the game in the right way. He got better as he got older and scored a lot of runs against some very good bowlers. Pounced on the loose ball. Solid defence. He'd put you over the top of the slips if you were short and wide.

Viv Richards
Just something special. Every shot had blistering power, aura. Everything about him was phenomenal. The way he swaggered out there - West Indies could have been one or two for zip when Viv came in, it didn't matter. It was like they were 2 for 400. He just took command. He never wore a helmet, ever, and he got hit a few times. I remember Rodney Hogg hit him on the chin during the Boxing Day Test one year. Next ball, Hogg bowled a short one and Viv hooked him for six - at Melbourne, to the long end, ten rows back. Things like that people just don't do. If you didn't get Viv early, you were in for it.

Zaheer Abbas
I played with Zed at Gloucester and bowled against him in the nets, so he's in. I played three or four games with him in 1981, and in that season, Zed made something like 200 and 150 in one game and got two hundreds in another. Wristy player, beautiful to watch. Classic hundreds. Annihilated the bowling. He could bat forever. His concentration level must have been extraordinary.

Martin Crowe
Beautiful to watch. An exquisite timer of the ball. He stood up, had great hands, positioning - back or forward, it didn't matter. Had all the shots. He'd open up the whole field. It was hard to stop him when he was on fire. A great bloke. He hit a hundred in the first game of the 1992 World Cup, against Australia in Auckland. I wasn't playing but I remember sitting in the viewing area and thinking, "You wouldn't see anybody bat better than this." So perfect. A standout for New Zealand for most of the time he played. You gotta have Shane and AB in your corner © Getty Images

Allan Border (captain)
When we played for New South Wales against Queensland, he played every game like it was a Test. He'd been at NSW, so we were arch enemies and he always wanted to put us to the sword. A great technician in any conditions, tough, a great player of spin and fast bowling. He demanded respect. He got grumpy now and again, but it might be because he'd got 40 in a one-day game and he knew if he'd got 60, we'd have won the game. But you couldn't blame yourself for that. The other guys should have chipped in and got the extra 25. He put a lot of pressure on himself when the team didn't perform well. In 1989, in the Ashes in England, he went out on a limb and said, "F**k 'em, I'm not talking to anybody", though [David] Gower and Botham were great friends of his. We won that year in an unbelievable manner. If you wanted someone in the trenches next to you, it was AB.

Jeff Dujon
As a keeper to fast bowling, he was extraordinary. Great hands, great mover. When you're taking four bowlers bowling 90mph, you've got to palm 'em properly or your hands will be really sore. And the odd one that goes down the leg side, moving away from you at rapid pace, Dujon always seemed to be able to get over there to take it with that one-handed dive of his.

He was a gun batsman too. If ever West Indies were in any trouble and looked like they were going to be knocked over, he'd come in and resurrect the innings with one of the top-order batsmen. West Indies weren't in trouble too often, but when they were, they knew they could rely on Dujon.

Ian Botham
Just look at his stats: 5000 runs, 14 Test centuries, 370-odd wickets, 100 catches. First came across him in the 1981 series. He was young then but he had that aura around him already. Big, strong, purposeful, skilful. Could plunder the ball when he hit it. Clever, clever seamer. Quicker than everyone thought. When he really let one go, it was good pace.

One of the first bowlers I saw who would change his pace to get wickets. He would bowl a half-track slow ball that someone would sky up in the air, or someone would nick a wide half-volley to slip and they'd all go, "Botham's got a wicket on another s**t delivery." But running up to the wicket ball, he'd have bowled five amazing overs and then thrown this rubbish ball in, and the batsman's eyes have just lit up. It was purposeful. And bucket hands in the slip - never dropped a thing.

The best I played with

Shane Warne
I played against him at Victoria. The best bowler I've ever seen. He would bowl on any wicket anywhere in the world and extract turn. I'd never seen a legspinner swing the ball into the right-hander and then turn it away sharply. I had read about blokes who had done that, like Bill O'Reilly. That Gatting ball - it swings outside Gatting's legs from middle and leg, lands in a footmark and then turns and hits the top of off stump.

I played against Warne when he was a young bloke. He was tubby, had a mullet haircut, smoked cigarettes, drank beer and ate shit food. But he could bowl. In about 1990, he went on an Australia Under-25 tour. Steve Waugh and Mark Taylor went on that tour as senior players to help the young blokes. When they came back, they said there's this young guy in Victoria who could be something really special, and they wanted to try and get him to play for us in NSW, because it was a turner. But like us at NSW, he's a diehard Victorian and wouldn't leave.

Michael Holding
I played one game against him, for Gloucestershire against Lancashire at Old Trafford in 1981. Couldn't believe it. Wow! He took six or seven in the first innings. He was pushing off the sightscreen and bowled like 100mph. The wicket ran the other way in those days and you could watch it side-on from the pavilion. Watching him side-on, and how far the ball was carrying, was frightening. I couldn't believe anybody could bowl that fast. I was intoxicated watching him bowl that day - his run-up and his rhythm. It made me really think about fast bowling.

Dennis Lillee
He played Sheffield Shield for Western Australia against us. He was such a huge figure, a hero for everybody, not just Australians. He was the man you wanted to emulate if you were a young fast bowler. Dennis changed fast bowling. He had those back injuries, went on the exercise routine, strengthened his core, did these isometric stretches, the diet.

His run-up was beautiful; his gather, the speed he bowled, what he could do with the ball - legcutter, outswinger, dig one in, everything. He set the blueprint, not only for all of us in Australia but around the world. 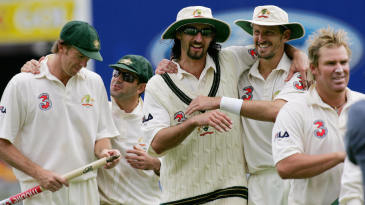