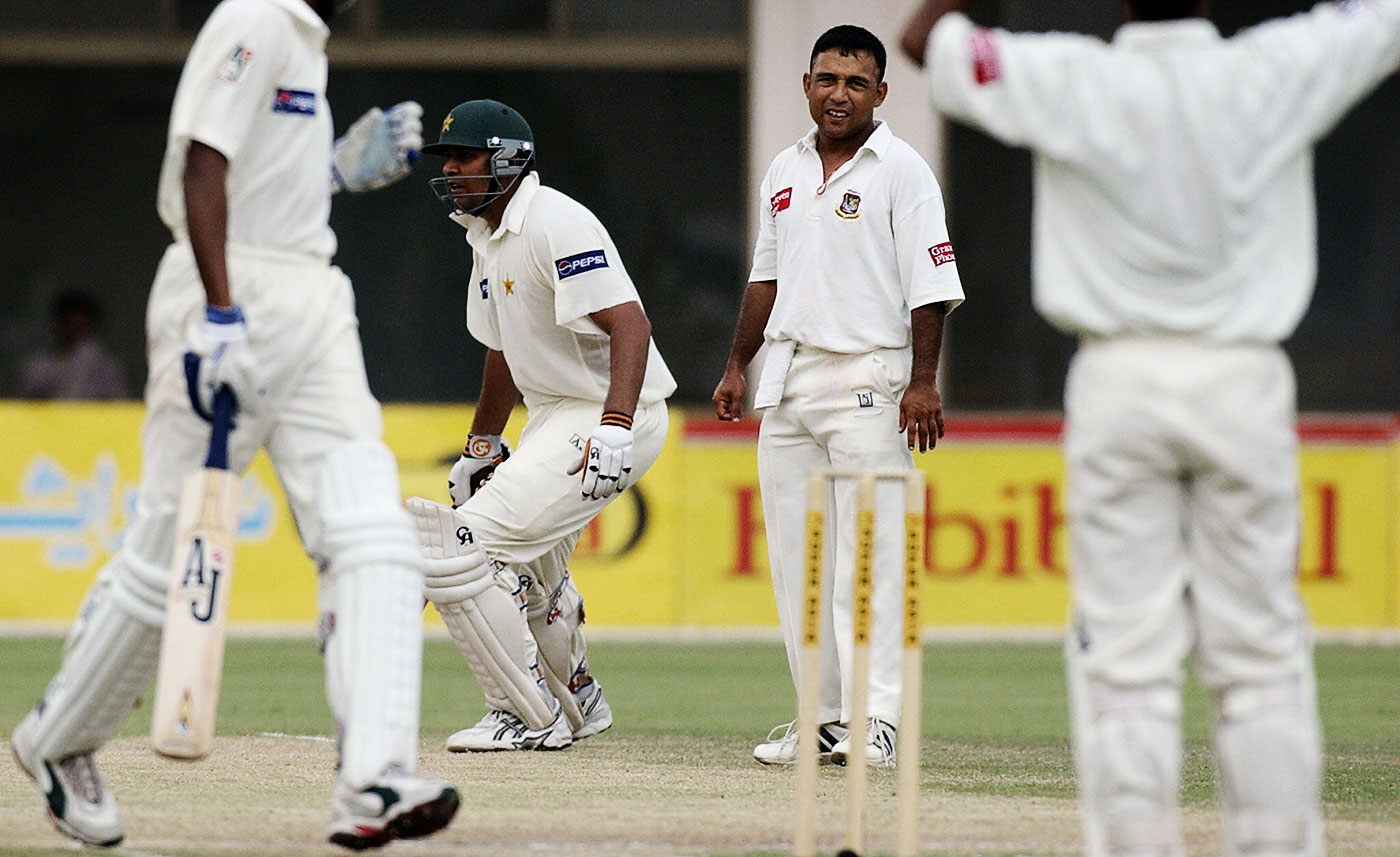 We could have made history: Khaled Mahmud looks peeved at Inzamam-ul-Haq's insistence on winning the 2003 Multan Test

Five matches across formats that were so nearly big upsets

Pakistan v Bangladesh
Multan, 2003
It is easily forgotten just how wretched Bangladesh's early years in Test cricket were. Going into the third match of their tour of Pakistan in 2003, they had lost 22 of their 23 games in the format - the only exception a rain-affected draw against Zimbabwe.

In Multan, Bangladesh batted first after winning the toss and secured a 106-run lead in the first innings before folding for 154 in the second, leaving Pakistan an imposing target of 261. Only once had a higher target been successfully chased in the country, and after Pakistan wobbled to 99 for 5 and then 205 for 8, they looked set to become Bangladesh's first Test victims, but Inzamam-ul-Haq, in a rut after a miserable World Cup earlier in the year, took matters into his own hands.

He shimmied down the track to the spinners, cut, pulled, punched and flicked his way to 138 not out. Umar Gul, who had faced only one ball in Test cricket before this game, stuck it out for a crucial 50-ball 5 from No. 10. Gul was run out with four required, but last man Yasir Ali scampered through for a single to give the strike back to Inzamam, who swivel-pulled Khaled Mahmud to fine leg to seal a one-wicket win.

"We didn't talk for a long time after that game," remembered Mahmud. "Everyone cried in the dressing room." It would be another 16 months until Bangladesh finally won a Test - and almost six years until they won away. Mumbai Indians v Somerset
Champions League T20 semi-final, Chennai, 2011
Mumbai Indians went into the 2011 Champions League depleted due to injuries, but do not let that distract you from the scale of the mismatch between them and Somerset in the tournament's semi-final. Just look at the money: Mumbai's shirts featured the logo of a huge motorcycle company; Somerset's that of a local food-service provider run out of a warehouse on an industrial estate. Harbhajan Singh, Mumbai's stand-in captain, was on a US$1.3 million IPL deal - approximately 40% of Somerset's entire playing budget for the year.

But their bowling attack restricted Mumbai to 160 for 5, and Somerset were properly in contention most of the way through the chase, thanks to Jos Buttler and Craig Kieswetter's partnership. They needed 45 from the last four overs, and 16 came off Abu Nechim's final over. Lasith Malinga's penultimate over was successfully negotiated, seven coming off it, leaving the equation at 22 from 12 balls.

Buttler would have had four off the first ball of the 19th, from James Franklin, but for a superb, desperate piece of fielding from Kieron Pollard. Next ball, Buttler nailed one straight back down the ground - only for it to strike Kieswetter flush on the forearm, causing a long stoppage and costing Somerset four runs.

After the delay, Somerset imploded. Buttler and Kieswetter fell within three balls of each other, and with 14 to defend off the final over, Malinga yorked both Nick Compton and Murali Kartik, while conceding only four.

"We've pushed a top team," said Alfonso Thomas. But it's that guy Malinga, isn't it?" 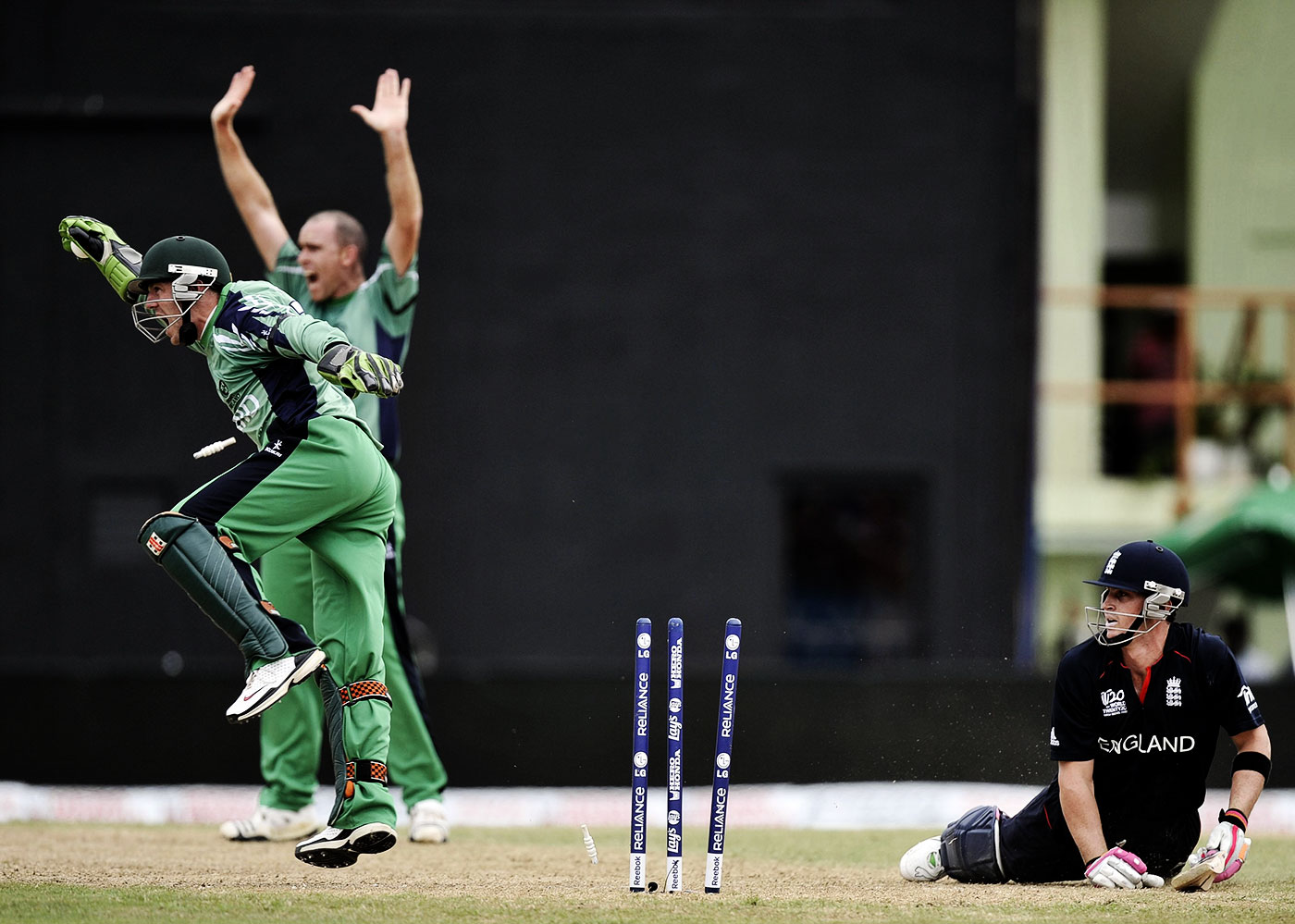 Craig Kieswetter, one of England's top scorers in the 2010 World T20, was run out for 13 in their match against Ireland © PA Photos/Getty Images

England v Ireland
World T20, Providence, 2010
Everyone knows how England won their first major ICC event: they stumbled across an opening partnership of Michael Lumb and Craig Kieswetter; their canny bowling attack reduced teams to below-par totals; and Kevin Pietersen plundered his way to the Player-of-the-Tournament award, thanks to an imposing run with the bat.

But it could all have been so different. England eked out 120 for 8 batting first. In Ireland's chase, Michael Lumb took a blinding catch in the second over to account for Paul Stirling, but Niall O'Brien got his side moving in the fourth with a pair of leg-side boundaries off Ryan Sidebottom. And then the rain came.

Ireland's revised equation was announced over the PA as 47 off 33 more balls when the rain briefly abated, but the unforgiving Guyanese downpour refused to let the players back on. Indeed, they would have needed as few as 27 off five overs if they had been able to squeeze the requisite overs in, according to ESPNcricinfo's ball-by-ball commentary.

"I genuinely think Ireland would have won that game," O'Brien later reflected. "Not with ease, but I think we would have chased down the total and progressed. But it was not to be." 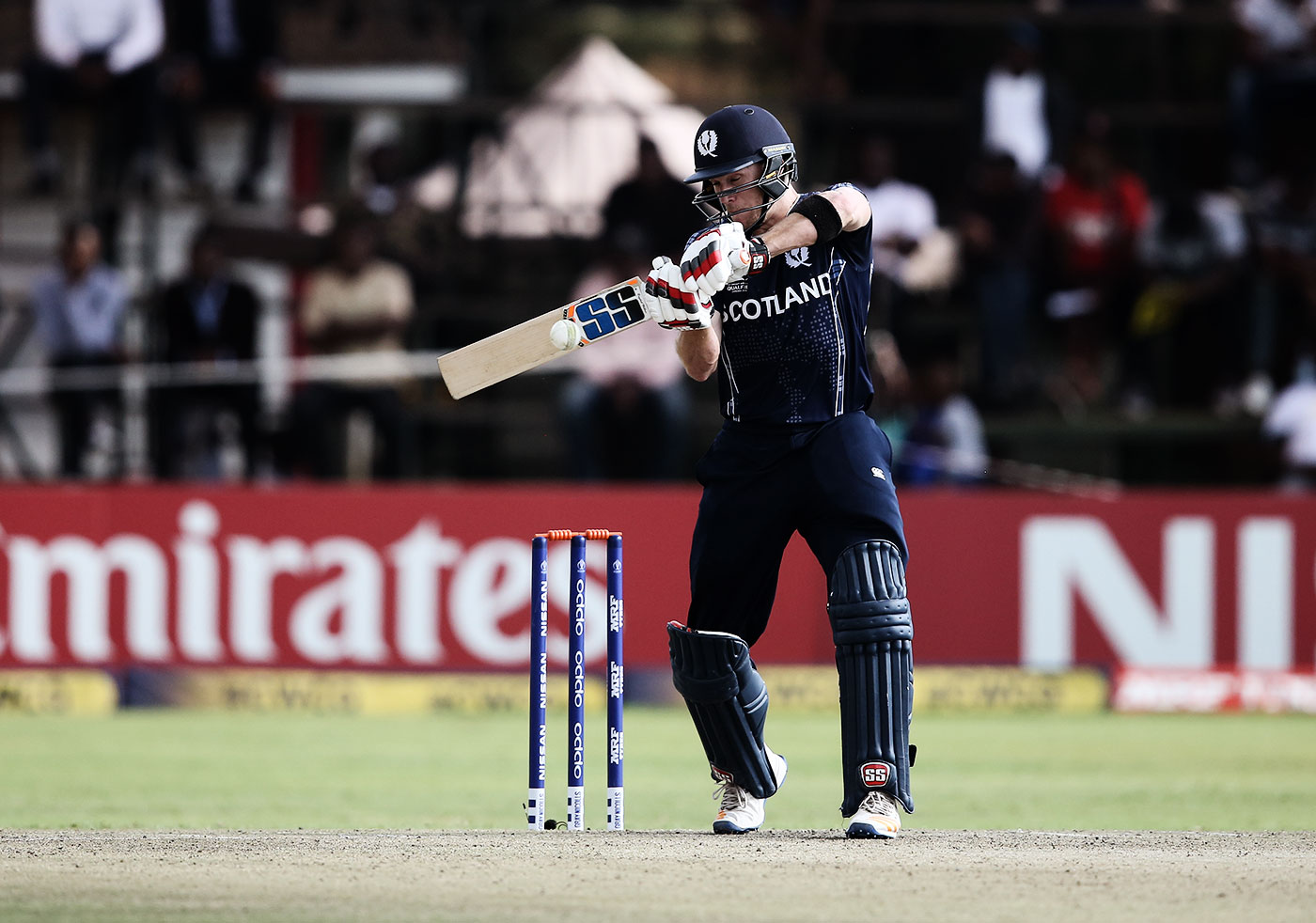 If the 2018 World Cup Qualifiers had had the DRS, it could have been Scotland playing the main event a year later instead of West Indies © Getty Images

West Indies v Scotland
World Cup Qualifier, Harare, 2018-19
The stakes could not have been higher. West Indies, two-time world champions and with superstars of the global game in their ranks, needed to beat plucky Scotland to qualify for the World Cup - otherwise, they would be relying on an improbable set of results in other games. And after Safyaan Sharif struck with the first balls of his first and second overs to dismiss Chris Gayle and Shai Hope, it looked as though the Jocks were on their way to England. Marlon Samuels and Evin Lewis offered some resistance with half-centuries, but a total of 198 looked some way short of a par score.

Scotland's run chase started horribly, though, losing three wickets in less than seven overs, but Richie Berrington dug in to rebuild, first alongside Calum MacLeod and then with George Munsey. But when Berrington was on 33, Ashley Nurse fired in an offbreak that struck the pad: Hawk-Eye showed that the ball would have missed leg stump by some way, but as if to demonstrate the ICC's neglect of the qualifying tournament, the DRS was not in operation. Berrington trudged off, the DLS par score shot up, and as the rain came down, Scotland were five runs short of their target.

"Clearly that lbw decision is not sitting very well with us right now," Kyle Coetzer, the captain, sighed. "It's not the first one in this tournament. In a competition like this, it comes down to a big game like that. Hong Kong v India
Asia Cup, Dubai, 2018
India's Asia Cup squad in 2018 was missing a couple of stars, but few would have given Hong Kong - who had lost their ODI status six months previously - a prayer of causing a shock after their humiliating defeat against Pakistan two days before.

India made 285 for 7, and it looked like it would be way too many for the lowly Associates to chase down. That was until Nizakat Khan and Anshuman Rath joined forces. Stand-in captain Rohit Sharma was soon reaching for the paracetamol as the two kept going and going, and when Rath launched a six to leave the equation at 123 off 113, the upset was well and truly on.

But after he chipped gently to extra cover on 73, Hong Kong fell to pieces. Khan departed in the following over, trapped lbw by Khaleel Ahmed, and their inexperienced middle order was exposed as the asking rate grew.

"Not a lot of things went to plan," Sharma said later, while Rath was left to rue his team's failure to complete a victory for the ages. 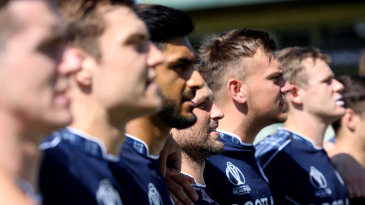 One year ago, Scotland missed out on the World Cup by five runs 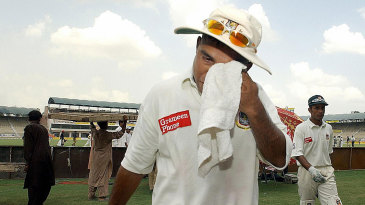 'Everyone cried in the dressing room'

The 2003 Multan Test ended in heartbreak for Bangladesh, but for Inzamam-ul-Haq it was a match that saved his career 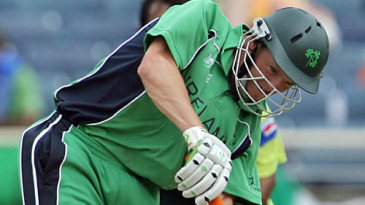 Minnows who showed up their stronger rivals