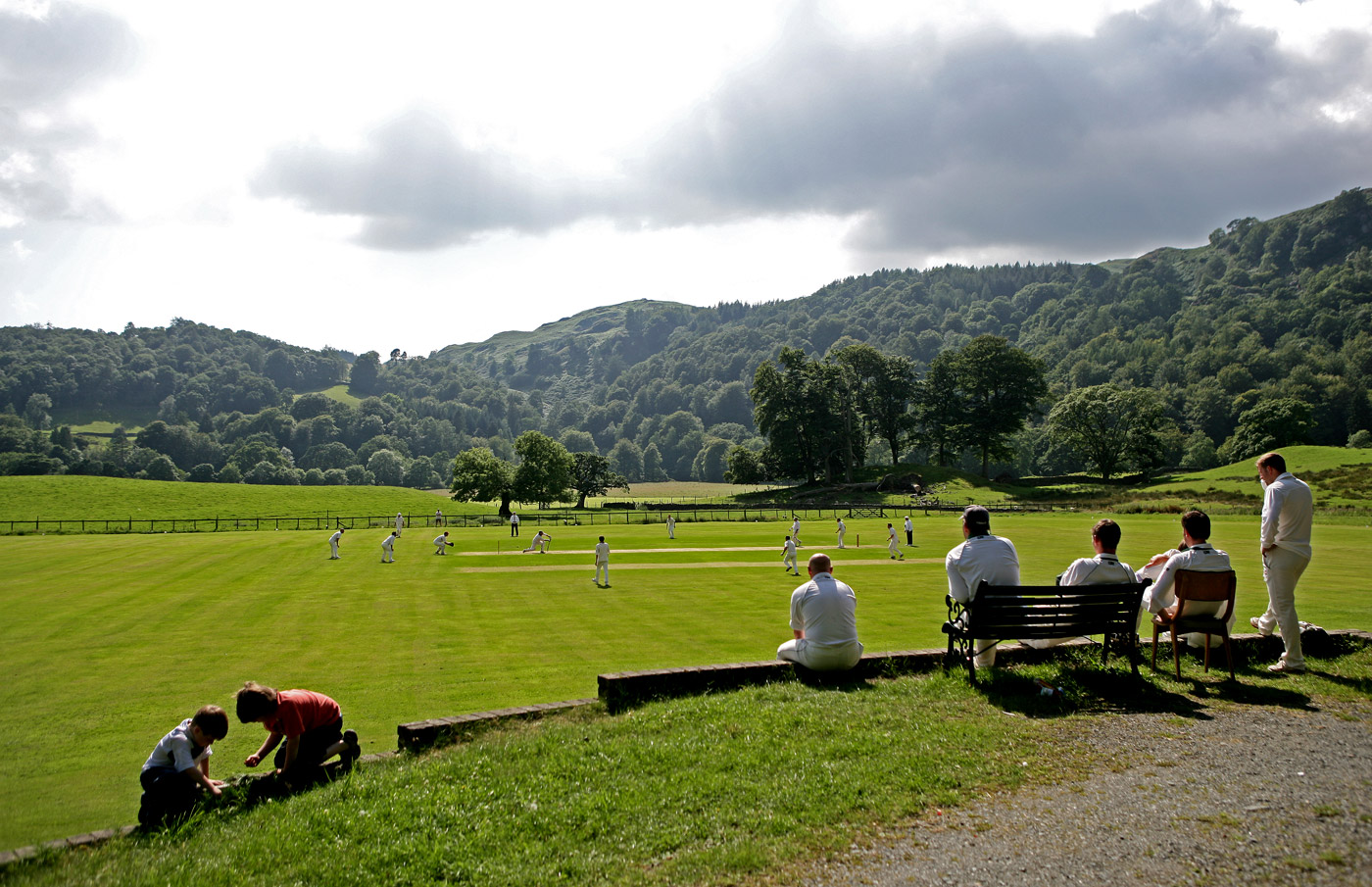 They're lush, quaint and full of history: cricket is a sidelight on these charming grounds

As a foreigner from warmer climes, I have always said that when England actually does summer, there is no better place. The greens, the blues, all the colours of the rainbow in full bloom celebrate promise and abundance and life. When cricket is played against this backdrop, the picture is complete.

We could pick a High Fifty of beautiful cricket grounds in England, from village greens to international venues, but for now, let's marvel at five of the prettiest outgrounds in county cricket, all of which were due to host fixtures in 2020. With the coming season now up in the air because of the Covid-19 crisis, the schedule is uncertain, but the beauty of these places is beyond doubt. Arundel Castle Cricket Ground
Nestled above the quaint market town of the same name, amid the imposing structures of the castle and the cathedral, Arundel Castle Cricket Ground is breathtaking, with spectacular views of the South Downs through the gap in the trees. Arundel began as a private playground to Henry Fitzalan-Howard, the 15th Duke of Norfolk, who built it in 1895. It was opened up by his son, Bernard, the 16th Duke, who loved cricket. The castle remains the seat of the 18th Duke of Norfolk, Edward, and the cricket ground is on his land.

Usually in the county season the ground hums with spectators eager to experience its charms, like the tiny manual scoreboard, wood-panelled tea room, and steps carved into the turf leading from the changing rooms to the pitch.

Sussex have played here each year since 1990 and many notable names have graced the pitch before and since. When Bernard invited Richie Benaud's Australians to begin their 1956 tour here against the likes of Len Hutton and Colin Cowdrey, word got out and Arundel became a sought after venue. It provided preparation for the Australians as recently as the lead-up to the 2019 Ashes and its place as a jewel in the crown of outgrounds suggests it will attract admirers for years to come. 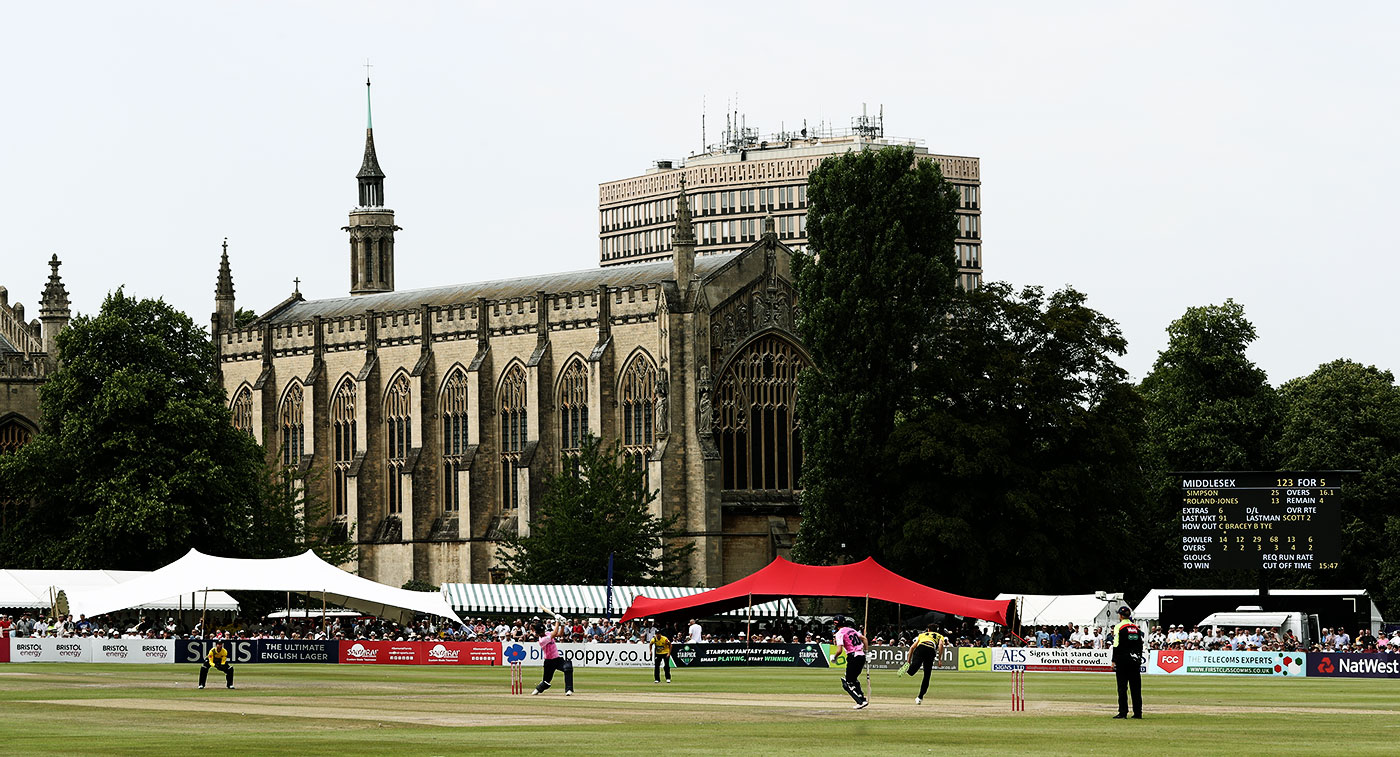 Cheltenham College
The pristine grandeur of this ground could not seem further from the edgy street art made famous by Banksy just a short stroll from Gloucestershire's chief home, the County Ground, in Bristol, to the south-west. The college building, chapel and refectory frame the ground down one side, and the pavilion's external walls are adorned with giant hanging baskets overflowing with summer blossoms between grand Gothic arch doorways. Spectators can stroll round the entire ground while watching the action in the middle.

Gloucestershire will celebrate the 150th anniversary of playing matches at the ground in 2022, and the setting makes it easy to understand the longevity of the Cheltenham Cricket Festival.

The county's own WG Grace scored the second of his two triple-centuries within the space of a week, an unbeaten 318 against Yorkshire, here in 1876. Four years earlier, Grace had taken 12 for 63 to lead his county to victory over Surrey in the inaugural first-class match held here. In 1977, Zaheer Abbas scored 205 not out and 108 not out against Sussex, the third match of four in which he scored a double-century and a hundred without being dismissed. The ground has also seen a unique hat-trick of stumpings by William Brain in 1893, the ball from which sits in Gloucestershire CCC's museum in Bristol. If there are rhododendrons in the background, it's got to be Tunbridge Wells Sean Dempsey / © PA Photos/Getty Images

Nevill Ground, Tunbridge Wells
No wonder a new Bollywood movie has been filmed and set here. And it's not just because of the quaint pavilion and immense rhododendrons that appear around May 30 each year - "you can set your clock by them," locals say - in all their amethyst splendour.

On June 18, 1983, India crumbled to 9 for 4 against Zimbabwe in the World Cup group-stage match here when Kapil Dev came to the crease, and soon after they were 17 for 5. He struck an unbeaten 175 to carry his side to a match-winning 266 for 8. India went on to defeat West Indies in the final, and the Nevill Ground in Tunbridge Wells, 30 miles south-east of London, has been luring pilgrims ever since. The film, 83, retells the story of India's famous win, and the iconic rhododendrons naturally feature as part of the set.

Crowds come to simply soak up the festival atmosphere during Cricket Week, held annually since 1902, when the ground plays home to Kent. Named after the original owner, the Marquess of Abergavenny, William Nevill, this is a place where time stands still. The London-to-Hastings railway runs alongside the ground, linking Kent and Sussex, and until early last century, the border between the two counties bisected the ground so that, depending on where the fielders stood, they could be playing the same match in different counties. Queen's Park: some cricket, a picnic, and possibly a nap in the shade? Nathan Stirk / © Getty Images

Queen's Park, Chesterfield
Established for Queen Victoria's Golden Jubilee in 1887, this ground, 30 miles north of Derby, has staged cricket for more than a century. Derbyshire's main home ground until they moved to Derby in 1998, the venue was revived as an outground in 2006. An eye-catching glass conservatory overlooks the pitch against a bank of gigantic trees, and the pavilion is like a doll's house.

It is a small ground, so you can see some big scores, but it's slow to dry after rain, thus providing a green wicket on occasion.

Chesterfield has witnessed two triple-centuries - when John Brown reached 300 in setting a then-record first-class partnership of 554 with Yorkshire team-mate John Tunnicliffe in 1898, and when Percy Perrin scored 343 not out (including 272 in boundaries) for Essex in 1904.

The 1947 edition of Wisden recounts how a Championship match between Derbyshire and Yorkshire was interrupted the previous June after just two overs - the home side were batting - when it was discovered the pitch was two yards longer than the regulation 22. The game was restarted once the pitch was reset and Yorkshire won by four wickets. Are batsmen at Sedbergh allowed to blame the views for being too distracting when they get out? Nathan Stirk / © Getty Images

Sedbergh
Sedbergh School in Cumbria holds some ugly memories for James Anderson, but that cannot spoil the remote beauty of this ground, encircled by the Howgill Fells between the Lake District and the Yorkshire Dales. The town has a population of fewer than 3000 and the nearest large city is Lancaster, a half-hour drive south.

Cricket has long been played at this independent, co-educational boarding school and, as word spreads, more high-profile matches are likely to follow. Sedbergh is rich in history, natural beauty and architecture - an example of the last is the century-old Knowles Pavilion with its gloriously symmetrical twin facades and wooden staircase leading to the field.

When Anderson clutched at his right calf after sending down eight deliveries on the third morning of Lancashire's Championship match against Durham last July, the ramifications would be felt much further away. He ended up bowling just four overs in the first Ashes Test a month later before a recurrence of the injury forced him to pull out of the series. 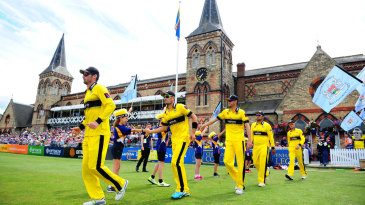 When you spend your childhood in the shadow of a magnificent cricket ground, you tend to take it for granted. Revisiting helps put things in perspective How to set the field in village cricket

The art of captaincy must take into account smokers, sleepers, and atrocious bowlers