To play or not to play: that should never be the question

AB de Villiers. Just how exasperating is he? Sure, he's one of the best at what he does and all that, but also entitled and arrogant, making the most of his privilege, putting his own interest above everyone else's.

No? Okay, apologies then, but he's doing a damn good impression of it.

He had his turn, he was tired, and though the runs were still coming as smoothly as ever, he said he was done. In May 2018. No, AB declared, he was not going to become a T20 freelancer; he was out of gas and moving on. It didn't quite turn out that way.

The T20 gigs piled up - they were bound to, and really that was fine. He didn't want in with South Africa. With only a few years left in the game, he was out to rake in as much as he could. Wouldn't you? That doesn't make him a mercenary, just someone looking out for himself and his family. There's no shame in it.

The issue was the doublespeak. There were reports that he approached the South Africa team management before last year's 50-over World Cup to give it a tilt, and is now trying to stay in the frame for the T20 World Cup this year (pandemic permitting). Maybe it's just me - isn't it that, always, when we sit in judgement? - but this doesn't feel right.

He was the Viv Richards of the modern-most era, or Sachin Tendulkar, or Kevin Pietersen. What was not to love?

You might well be your country's top draw, but don't leave your mates - and fans - in the lurch. Come clean. Say what you want to do, and do it. If you want to play the World Cup, prove your worth in the lead-up and earn your place. Don't take it for granted. At the very least, un-retire: it's not unprecedented.

A vaguely similar situation got my goat about a decade ago. India played 27 ODIs in the 365 days leading up to the 2011 World Cup and Sachin Tendulkar, close to 40 and ravaged by injuries, played just four of them (including the one where he scored 200 not out - against South Africa, in Gwalior). When the time came, the Indian team made room for their finest. Gautam Gambhir, who had opened in Tendulkar's absence, slipped down to No. 3 when the big man came back.

Sure, India won that World Cup, and sure, Tendulkar hadn't retired. Importantly, there was complete clarity that, if fit, Tendulkar would play the World Cup. But it still left a bad taste in the mouth.

The AB situation is frankly starting to get a bit silly. Here is an outstanding, truly outstanding, cricketer, who is only demeaning himself (in my eyes, anyway). He is one of the greats - the original Mr 360 Degrees.

It's easy to see why things are the way they are from the team's point of view. They want him. But this means that a front-line batsman will have to make way for the big man come World Cup time. That isn't fair. Do I want to see AB at the tournament? Heck, yeah. But not like this.

The AB I'd love to see is the one who, in the green and yellow of South Africa, became the best limited-overs batsman in the world. Oh, he was genius. And not just in short-form cricket. Take it or leave it: AB de Villiers defended as well as he attacked © AFP

Remember AB in 2008? There he was, after a patchy start to his international career, scoring an almost run-a-ball hundred in Durban against West Indies, hitting 217 not out in Ahmedabad, 174 at Headingley and then 39 and 97 at The Oval to take South Africa to a series win. There he was, with 63 and 106 not out in Perth, in another South African away victory.

But 2015 might have been the year in which I - and many others, I'm sure - truly realised the position of privilege we were in: watching a man who could clobber 149 runs in 44 balls in an ODI and also bat six hours and 297 balls for 43 runs in a Test innings in Delhi. (Okay, so South Africa lost that Test, but how about the time in Adelaide in 2012, when he and Faf du Plessis saved the match? Then, AB had 33 runs from 220 balls in over four hours.)

As he put up these unbelievable numbers, becoming a bona fide ODI and Test great, he was evolving into perhaps the most complete T20 batsman in the world, redefining batsmanship. He was the Viv Richards of the modern-most era, or Sachin Tendulkar, or Kevin Pietersen. What was not to love?

In the semi-final of the 2015 World Cup, used to watching South Africa fluff their lines at the climactic moments, I felt a lump in the throat when Grant Elliott hammered the final six off Dale Steyn and the cameras panned to AB. Head bowed. Cap pulled down. Then walking off, hands on hips. Broken.

Not too long before that moment, he was buzzing around as if on a sugar high. Desperate. The game was getting away, and he wanted to make a win happen so bad. He had already hit 65 not out in 45 in the first innings. Now, Corey Anderson and Elliott were changing the script in the chase. Then came the chance. AB at the non-striker's end, waiting to collect the throw for the run-out. Half-volley. He misses, drops the bails, falls over, tries to pluck out the stump and fails.

It might have been the fumble that finished South Africa off. He looked distraught. I wanted to give him a hug. The press conference afterwards was, if anything, worse. I wanted this giant among cricketers to win the big one. Like I once did Brian Lara. No one deserved it more.

But if the T20 World Cup does take place this year, and AB does play, I won't be rooting for South Africa. It took Tendulkar six 50-over World Cups to get his hand on the trophy. Who is to say AB, and South Africa, can't do it this time? But that's beside the point.

The entire affair has been so unsavoury. It has reeked of cakes and having them and eating them. And while the South Africa cricket set-up could have played a better role in resolving the issue, AB could have done better too. He could have been the big man. 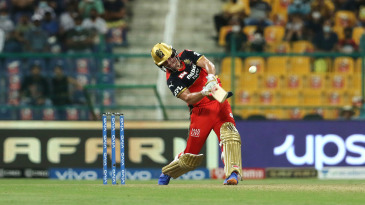 The innovation we see in T20 batting today started with him "After a lot of contemplation, I've decided to hang up my boots and spend quality time with my family" AB de Villiers - yes or no? South Africa 'should do anything' to win T20 World Cup, says Jonty Rhodes

The former batsman is, however, concerned about the worrying precedent that would set