Habibul Bashar, Bangladesh captain: The Zimbabwe team was far ahead of us in those days, that too in their conditions. We had already lost the Test series. I made a pair in my first Test as captain. While we waited for the rain to stop in Bulawayo [where the first two ODIs had to be abandoned], coach Dav Whatmore was trying to instil the mentality of trying to win rather than thinking about playing well and losing - he would tell us that there was no glory in that.

Mohammad Ashraful, Bangladesh batsman: One day on the tour, I was telling Shuvro bhai [journalist Utpal Shuvro] that the Bangladesh public treats us as heroes even though we don't win any matches. We have such a wonderful following despite our results. He told us: why don't you win one game and see what happens.

In the third ODI, played in Harare, Whatmore decided to open the batting with 20-year-old middle-order batsman Alok Kapali in the hope that he could take advantage of the field restrictions early in the innings (two fielders were allowed outside the 30-yard circle in the first 15 overs then) and help Bangladesh put up a total that their industrious bowling attack could defend.

Bashar: It was out of desperation that we decided to send Alok Kapali as an opener. He could play over the top and handle pace. We told him he could open in all five matches of the series even if he didn't score. We wanted to try things. Whatmore was a great planner. He knew that in order to win, we needed runs on the board in the first 15 overs.

"When that partnership was broken, we smelt a win. Our body language completely changed. We started fielding like tigers. I realised at the time that this is what they call a winning mentality" Habibul Bashar

But in the sixth over, Kapali was caught behind off Douglas Hondo for a 21-ball 9. The score soon slid to 20 for 2, and Bashar, leading his side for the first time in an ODI, was joined at the crease by 20-year-old Rajin Saleh.

Tatenda Taibu, Zimbabwe wicketkeeper-batsman: Douglas Hondo was getting onto the scene at that time. He was bowling well that day, getting the ball to move off the seam more than our other bowlers.

After riding out Heath Streak's first spell, Bashar and Saleh added 114 runs for the third wicket, a rare big partnership in those days for Bangladesh. While Bashar was the accomplished batsman in the side, Saleh's reputation as a steadfast top-order presence started to grow after this innings.

Bashar: It was the usual Harare wicket. It had enough for the fast bowlers. Rajin and I decided we would look out for Streak and [Ray] Price, their most dangerous bowlers, and target Hondo and [Blessing] Mahwire. We told each other we needed to bat for long.

Rajin Saleh, Bangladesh vice-captain: Batting with Shumon bhai [Bashar] is a different experience. He always spoke positively. In this partnership, he kept telling me that I was on top of the bowling. I started to believe it too. The other aspect in that partnership was the singles we took. The boundaries came once in a while, but Shumon bhai insisted we break down our stand into small portions: put together 20 runs and then take it from there.

Taibu: It so happens that Habibul and Rajin are both my friends. They played really good cricket during that partnership. They hardly gave us a chance. At Bashar's fall, Bangladesh sent in Mohammad Rafique as a pinch-hitter, but this promotion didn't work either; he was out for 6. Saleh and Mushfiqur Rahman followed him back into the dressing room in quick succession - Bangladesh had frittered away a good start, losing four wickets for 26 runs.

Bashar: After our partnership ended, it was necessary to use the slog overs and get as many as we could. This is where Dav stressed on getting a bigger total rather than settling for a respectable score on the board. We had to try to win the game. But we were on 160 for 6. It was part of Dav's plan to score quickly in the last ten to 15 overs. We were slowly making the players understand that we had to play certain roles for the team, and as captain and coach, we backed them when they failed.

It was left to the teenage Mohammad Ashraful to get the job done in the slog overs. He breezed to his third ODI fifty and added a record 51 in 33 balls - then the fastest 50-plus stand for Bangladesh - with Khaled Mahmud.

Ashraful: I came to bat with ten overs remaining and we needed as much as possible. I ended up making the fastest fifty for Bangladesh at the time. I was in good nick. I had made 98 in the first Test on that tour. It was the first time I played the scoop in an international match. I played a few against Heath Streak. They weren't too surprised, since I think they rated me as a batsman. With Shujon bhai [Mahmud], I got us to a competitive 238.

Bashar: Zimbabwe's batting was good, but if our pace bowlers bowled well, there was value from this Harare wicket, which wasn't a solid batting one like Bulawayo's. We felt, after scoring 238, that we had an opportunity.

"When Tareq took the ninth wicket and started running off with the stumps, I reminded him that we needed one more wicket" Bashar on having to tell the celebrating Tareq Aziz that the game wasn't over yet

Bangladesh got an early breakthrough when Tareq Aziz, playing his sixth ODI in two years, trapped Grant Flower for 2 in the fourth over.

Bashar: Tareq is hardly talked about when we mention this game. Usually Ashraful and I get the credit, but if it wasn't for Tareq's bowling, we probably wouldn't have won this game.

Zimbabwe recovered with a 109-run second-wicket stand between Barney Rogers and Stuart Carlisle.

Saleh: Between overs, I would go up to Shumon bhai and tell him that Zimbabwe had to make one mistake and we'd be back in the game. I told him to keep encouraging everyone.

Bashar: The partnership looked like the same old story for us. I remember Rafique bowled well, but we needed a wicket to lift ourselves up.

Mushfiqur Rahman, a promising seam-bowling allrounder, gave them that wicket - Rogers caught at point by Kapali in the 22nd over.

Bashar: When that partnership was broken, we smelt a win. Our body language completely changed. We started fielding like tigers. I realised at the time that this is what they call a winning mentality. Taibu was sent to bat at No. 4 for only the second time in his ODI career. Although it turned out to be his most profitable batting position, it was still early days there for him.

Taibu: I was taking baby steps batting at No. 4, but I cherished batting at that position. I felt 239 was chase-able, easy to get.

He was caught off Rahman for 2, and when five overs later, Zimbabwe's top scorer, Stuart Carlisle, fell for 71, the hosts slipped to 140 for 5. Bangladesh were getting close, but one threat still remained.

Bashar: Streak could have changed everything in that game. He was our main concern. With him around, it was game over for us.

Streak shepherded the chase and took Zimbabwe close, falling to a memorable running catch from keeper Khaled Mashud when they needed 40 off the final five overs.

Bashar: Tapash Baisya got the wicket of Streak. He was another unsung hero for us in those days. In this game and later in our first Test victory, he gave us important breakthroughs but never got the due credit.

Stuart Mastikenyeri now held the key, with Zimbabwe needing 13 off the final over.

Tareq Aziz, fast bowler: When they were deciding who would bowl the final over, I gave Shumon bhai the confidence that I can do the job. I had given away some runs in an earlier over, so I wanted to make it up. There was pressure, but I understood what needed to be done.

With the first ball of the final over, his sixth, Aziz clean-bowled Matsikenyeri. The Bangladesh team burst into celebration.

Bashar: It was a thrilling finish. Matsikenyeri could bat. When Tareq got him out, we were quite relieved.

Aziz: I just bowled it full on the stumps. You don't plan these things. Sometimes you pull it off. This was one of those occasions.

Aziz bowled Hondo with another full delivery, sending the Bangladesh team into a frenzy. The young fast bowler was on a hat-trick but he hadn't realised there was one more batsman to come.

Bashar: When Tareq took the ninth wicket and started running off with the stumps, I reminded him that we needed one more wicket.

Aziz: I thought Hondo was injured, but he came out to bat, and for some reason, I forgot they had another wicket left. When I bowled [Hondo], I started to take off the stumps. We all had a good laugh about it later in the dressing room. Aziz gave only four runs off the remaining balls and Bangladesh won by eight runs. It was their first ODI win in five years and their first international win since becoming a Test-playing nation in 2000.

Bashar: You can imagine it was a big thing at the time. I was on my first tour as captain and the Test series hadn't gone well. I hadn't convinced everyone about being captain. I had been a vice-captain for a year and my only experience as captain was leading Bangladesh A once.

Aziz: I just shouted at Shumon bhai, who fielded the last ball, to get the ball back. We started our celebrations. Most of us were shedding tears after the game. I think it was the first time we all realised we can also cry after winning a game.

Grant Flower, opening batsman: We always respected Bangladesh. They had some good cricketers. I can honestly tell you that we were not surprised. In the first few years, we always fancied our chances against them as we had a good team. I think they respected the way we went about our business. It was just experience. We played more cricket.

After Bashar stopped the final ball at deep mid-off, he pumped his fists and got together with the rest of the team near the pitch. It was the end of a painstaking period for Bangladesh.

Bashar: We rued not winning this game in Bangladesh because that would have meant a big party. Most of the celebration in Harare was among ourselves in the hotel afterwards. We had a long adda that night. 'A Test match can change course in half an hour. That's what happened to us' 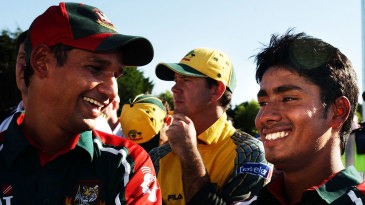 When Mohammad Ashraful took on McGrath and Gillespie

Fifteen years on, Ashraful, Habibul Bashar, Aftab Ahmed and others look back at that famous win in Cardiff When Bangladesh strode onto the Test stage