Someone thought it would be funny to give my English husband a DVD box set of the 2005 Ashes series as a Christmas present that year - the joke being on Australian me. I scowled whenever I stumbled upon it during house moves across two continents, incredulous that it survived a charity shop box or bin bag on countless occasions. It now sits on our bookshelf.

Who would have thought I would be the first one in the house to watch it, 15 years later, in an attempt to refuel a hate that had been shoved away at the bottom of a drawer long ago, like those bloody DVDs should have been? The only explanation I have for not throwing them out is that they weren't mine to dispose of, and it was, after all, the greatest series of them all.

As I gaze at the cover, past the main image of a grinning Michael Vaughan, I see the subject of my wrath: a maniacally roaring, champagne-spraying, devastatingly good Andrew Flintoff. I am reminded that there is something to love, in spite of myself, about Freddie.

I can't escape his feats from that summer. Memories flood back every time it is mentioned, and it is, often. My work laptop has a preset home screen showing the delighted faces of England supporters at Old Trafford as a figure in the foreground raises his arms in triumph. The crowd is in focus and the player is a blur but it is unmistakably Flintoff. He is celebrating the wicket of Simon Katich, for the second time in that third Test of '05, halfway to his haul of four wickets in the innings, before Brett Lee and Glenn McGrath held out to deny England victory. The result was good for Australia, but that image irks me nearly every day.

After starting to write this piece, I was half-watching a late-night rerun of a British crime drama I'd never bothered with before. One of the characters, explaining how a cold case got no press, told another: "We'd just won the Ashes, remember? It was all Flintoff and humiliated Aussies." I told you, I can't escape him.

So what is it about Flintoff that gets under my skin? Let's start off the field. Freddie is a blokey bloke, a man of the people, but I'm just not suckered into his class-clown routine. He sometimes does this thing where he leaves his mouth hanging open after he's said something, like he's waiting for his audience to break into laughter. Infuriatingly, they usually do because much of what says is entertaining - gah! And I'm sorry I wasn't amused by his turning up to England's post-Ashes celebrations in Trafalgar Square steaming drunk. This raised him even higher in the estimation of the crowd, which serenaded him with "You're pissed and you know you are." But what goes on in my head while watching that is akin to what goes on on his wife's face when, during a chat show years later, the camera pans to her as Flintoff recounts his antics that day: an uncomfortable, painted-on smile that morphs into a wince. Nor did I find his having to be rescued while trying to board a pedalo after a few drinks during the 2007 World Cup funny. But some did, and for them it only added to the "legend" of Flintoff - urgh!

Of course he turned up to those Ashes celebrations a day after playing no small hand in England's triumph, so he had a right to enjoy himself. He wasn't the only one hiding behind dark sunglasses that day either. And he's not the first or last person to do something silly after a drink. But I do hold international sportspeople to a higher standard. It just seemed - from the outside - like too many things were a big joke to him.

Even in that most iconic of images, Flintoff consoling Lee on the pitch at Edgbaston, I see a smirk on his face and wonder if it was all he could do to hold back a sledge. It was obviously a genuine act of compassion and sportsmanship that continues to be celebrated to this day, but I struggle to take this wisecracking lad seriously.

So I have to ask myself: if he was "one of my own" would I feel the same? After all, Australia has a proud history of lovable larrikins. I'm talking top-shelf here: Dennis Lillee, Jeff Thomson, Shane Warne, Max Walker, Merv Hughes, David Boon, Doug Walters, Keith Miller. I can't say I love to love any of those players either. Except Merv - because he's Merv and he's fabulous.

The pedalo escapade, for which Flintoff was contrite, was probably indicative of what he described in 2012 as "drinking more than I should". That he struggled with depression, and continues to be an advocate for mental-health issues, highlights the importance of his everyman appeal. It's an appeal I couldn't see until much later, but it is obvious when you consider his successful career as a TV personality.

Flintoff had turned things around much earlier, though. He initially reacted to criticism over his fitness with defiance, accepting the Man-of-the-Match honours in a 2000 ODI against Zimbabwe with a quip about how it was "not bad for a fat lad". But he also responded with action. He got himself in good enough shape to remove his shirt and unashamedly race around Wankhede Stadium upon bowling Javagal Srinath in a series-levelling one-day victory in 2002. But there were hidden costs. He later revealed that he had suffered from bulimia through much of his career.

So there's more to this man than initially appears. Who, outside his circle, knew that he could do such an impressive Elvis impersonation until he did so while miked up during a match? It's the things the stats don't record that spark my love for Freddie... and my hate. Are you loathsome tonight? © Getty Images

It was the fear he provoked in me during that Ashes series. You just knew he was the guy who could deliver when his side needed it. As one commentator put it that summer: "How many times do we see that? Flintoff into the attack. Wicket." An unspoken ability to spur team-mates on and whip his home crowd into a frenzy only added to my apprehension when Fred was in action, with ball or bat. Talismanic, you would call it. Magical and dangerous.

Behold the five sixes he smote in the first innings of that fateful Edgbaston Test, en route to nine for the match, and that wasn't the half of it. Seven wickets, four at key moments in Australia's second innings - including that over where he removed Justin Langer and Ricky Ponting - tightened England's grip on the urn. While he didn't claim the final scalp of Michael Kasprowicz that delivered victory by just two runs, he had taken his team to the brink of the win.

Flintoff shone bright that series. The power and timing as he punched Australia's bowlers around at Trent Bridge for a maiden Ashes ton was ferocious. By the time he helped himself to a stroke-laden half-century and a five-wicket haul at The Oval, he really could do no wrong. And you just knew it.

Even in his final year of international cricket, 2009, by when he was an aching veteran, Flintoff was conjuring up the improbable. An ODI hat-trick against West Indies in St Lucia came in a remarkable return of 5 for 19 in five overs. But he saved the best of what he had left for his old sparring partner, Australia. A brilliant five-wicket haul put him on the bowling honours board at Lord's. Then, playing his last Test, at The Oval, it was, of course, Freddie who pulled off the spectacular run-out of Ponting that ripped the heart out of Australia. England went on to reclaim the Ashes.

There he was, arms raised, chewing gum wildly with a nonchalant look on his face - and the crowd roared. People adored him. They still do. For all of it he deserves credit. And for all I hate about Freddie Flintoff, I love him, really. 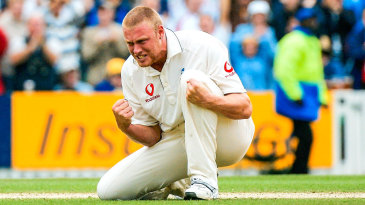 The gift of timing

All very good performers come alive on the biggest stages; the very great ones find their very best at those times You may smile at a six, but you'll cry at a seven 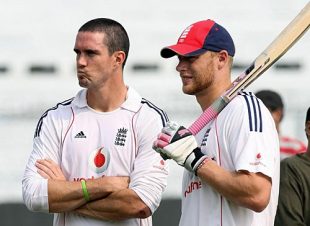 A tale of two English icons

One is seen as a man of the people, the other as a man for himself. What is perception and what reality?