"Whatever I did in cricket was a bonus"

Chuni Goswami: 'Playing cricket, there was no pressure for me'

The Indian footballer on his "second game"

Chuni Goswami, who died on April 30, was one of India's greatest footballers. He also played 46 first-class cricket matches, most of them for Bengal, batting in the middle order and bowling what he referred to as "slow medium pace". He chatted with ESPNcricinfo about his cricket career in May 2015.

I don't brag about it, but arguably I was the best footballer in the country. Whatever I did in cricket was a bonus.

My [first-class] debut was against Roy Gilchrist, the fastest bowler in the world at that time. He was playing for Hyderabad, Lester King for us [Bengal], Charlie [Stayers] for Bombay, and [Chester] Watson for Delhi. Four West Indian fast bowlers were brought in to bowl at our batsmen that season.

I always looked at cricket as my second game.

Calcutta University scored 817 against Bihar University in 1958-59, and [the top] four of us got hundreds. The fifth man got 93, PC Poddar. We were all good players. [Madhurya] Barua and Salil Banerjee opened the innings, and No. 3 was Shyam Sundar Mitra, No. 4 myself. All of us played for Bengal later on.

Getting picked for Central and East Zones was a great honour for me. People were slightly sceptical about my selection, because at that time I hadn't done much for Bengal.

Sunil Gavaskar scored a hundred against us in the 1971-72 final. He was so sure about himself, and his straight drives were extraordinary. We had Dilip Doshi, and I thought Dilip would take care of him, but he dealt with him easily. Brabourne was a beautiful wicket at that time. One hour at the most, the ball did something. Otherwise Gavaskar was too good.

I hadn't faced anyone as quick as Gilchrist [at the time of my first-class debut]. My coach was Gopal Bhattacharya, a practical man. He came to my house with nine or ten tennis balls, skins peeled off, and soaked them in water. He threw them at me from nine yards, ten yards. This is Gilchrist - thapaak! I knew it wasn't the ideal way to prepare, but it gave me some confidence.

Subrata Guha was a brilliant, god-gifted bowler, but he was not a hard-working man. He never practised a lot. Couple of overs he just limbered up, and then sat down in the pavilion. Wonderful action, beautiful run-up to the wicket, inswing, outswing - he was brilliant. Getting seven wickets against Bombay at Brabourne was no joke. He could have had a longer Test career, and I personally believe he did no justice to his talent.

We met Bombay six times during my career - four semi-finals, two finals - and lost each time.

[East and Central Zone] went to Indore and played against the West Indians, and I got five wickets in the first innings, three in the second innings, and I also got two catches. One of them was of Wes Hall. I stood at mid-on and ran about 30 yards towards deep square leg. It was almost going for six, but I ran and ran and I stretched out my hand, and it stuck.

I was lucky to have Dilip [Doshi] in my team. I kept him on at one end and kept rotating bowlers at the other end.

There was no pressure for me. I could be relaxed and enjoy my cricket. It was a game with a lot of time. You get to know people in the dressing room. I used to keep the dressing room laughing all the time with my anecdotes.

In the 1968-69 Ranji final against Bombay, I scored 96 and 84. That match, we were a little over-aggressive. We never kept a third man, and a lot of runs went through behind the wicket. Polly Umrigar said to me after the match, "Chuni, you got 387, which is a pretty good total. Why not keep a third man and let them earn their runs?"

If you had Dilip Doshi, you didn't need anyone else. He could pin down batsmen for hours together. A top-class batsman like Gavaskar could make some impact on him, otherwise, it was very difficult to play him. So accurate on his leg-and-middle-stump line, and if there was a little bit of turn, he was dangerous, because he hit the pitch. And his record shows that he earned 100 Test wickets in a quick span of time. "You need courage to play football at the highest level, so I never felt the pressure" © Indranil Bhoumik//Mint via Getty Images

I was physically fit because of football. I ran all the time. I fielded in the outfield, fielded in the slips, all over the place, so that was my asset. And you need courage to play football at the highest level, so I never felt the pressure. It all helped.

I got three wickets against Bombay in the semi-final in 1966. Ramakant Desai was more renowned as a new-ball bowler, but he was a decent batsman. He scored a hundred in the Ranji Trophy, and I think he scored 80-odd in a Test match also. He was a swing bowler and all that, so I went up and bowled: outswing, outswing, outswing, and he left it. The fourth one, I thought I must try one inswing, on the same stick, and he might play for outswing and something might happen. He left it again, and the off stump was cartwheeling. He laughed. He passed me on his way to the pavilion, and he looked at me. "Chuni da, you bowl inswing also?"

Manohar Hardikar was a hard-hitting batsman. I bowled one inswinger to him, he hit it for a six over deep fine. I was so annoyed, so dejected. I got him out with another inswinger, and Shyam Sundar Mitra, who caught it at leg slip, smartly put the ball in his pocket. Hardikar was looking all around. I said, "Go! Get out!" I was so annoyed, and he was standing there, flabbergasted. I went and apologised to him later. "Manohar bhai, I didn't mean it. You hit me for a six, I was hurt."

I batted at No. 5 and 6 mostly in the Ranji Trophy.

I scored 41 in the first innings of my first-class debut. That was face-saving, because nobody thought I could come into the Bengal team when I was still playing football.

When I got my captaincy in 1971, I was thinking, "I will leave cricket in two-three years' time, maximum. I must get a hundred before that." We were going to play against Bihar in Jamadora. They had a fairly good side. The wicket was absolutely good. I came to the dressing room. "Kalyan [Chowdhury] you are No. 1, Debu [Debabrata Mukherjee] No. 2, No. 4 Ambar [Roy], No. 5 Gopal [Bose]…" and I kept going. Somebody asked, "Who is three, Chuni da?" I looked at him. "Wicket is very bad, I tell you. It's very soft. I'm going No. 3, and I'm going to try and bat till the wicket dries out." Everybody was laughing, they knew all my tricks. I went there, and god was very kind to me. I played brilliantly, to be honest with you, and I got that coveted hundred in the Ranji Trophy. That was the greatest moment of my life in cricket. 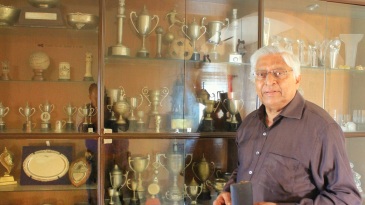 How many of these double internationals can you identify?

When Mark Chapman makes his debut for New Zealand, he'll join a band of journeymen who have played for two international sides. How many of them can you identify? Take our quiz and find out