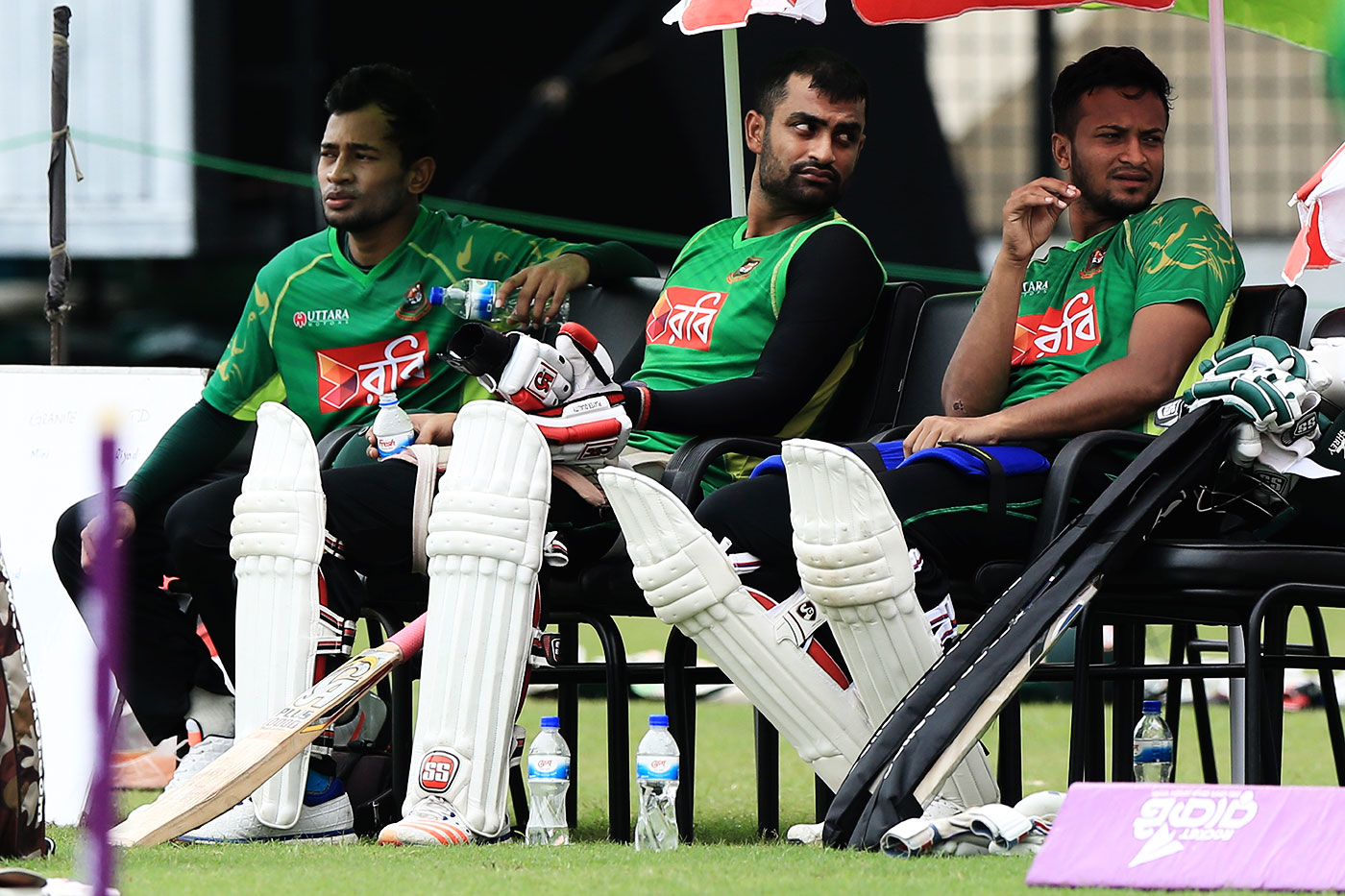 Mushfiqur Rahim, Tamim Iqbal and Shakib Al Hasan will beef up the batting (and bowling) of any line-up

Habibul Bashar played 50 Tests and 111 ODIs for Bangladesh, and captained them in both formats between 2004 and 2007 before becoming a national selector. Here, he picks the best XI of players he's played with.

Tamim Iqbal
I had heard about Akram bhai's [Akram Khan, former Bangladesh captain] nephew who could hit it a long way, but the first time I saw Tamim was in Zimbabwe, just before the 2007 World Cup. His signature shot was going down the track, He was a bit of a daredevil. Since we wanted someone to take advantage of the powerplay overs, we were interested in him.

Tamim's career over the last 13 years speaks for itself. He is the complete opening batsman. Many openers are great against pace but questionable against spin. Tamim can dominate spin bowling too. He can break any bowling attack. He can score in any conditions and has done so in England, New Zealand and Bangladesh. He can tackle the new ball and the old one, and that makes him one of our best batsmen.

Javed Omar
Mehrab Hossain and Shahriar Hossain were my other choices for Tamim's opening partner, but they couldn't hold their places in international cricket. Omar played 40 Tests. He knew how to blunt the new ball, grit his teeth and stay in the middle. There were others who came and went. Nafees Iqbal was one of the best batsmen of my time. He had good technique. Shahriar Nafees was a good player too. But Javed made runs during our periods of struggle. We always needed him to hold up an end.

Al Sahariar
Another very talented batsman who had lots of ability. He handled the new ball and was also great against spin. In his case, there was a bit of impatience from the selectors and of Sahariar also not performing up to his potential. He was shifted around a lot in the batting order. Sometimes he would open, sometimes he would bat at No. 6. During my Test career I mostly batted at No. 3, but if there was someone who could have grabbed a regular spot in the early days of Bangladesh's Test cricket, it was possibly him. All four of his Test fifties have come abroad - New Zealand, Zimbabwe, South Africa and Sri Lanka. But he never got that settled position and he didn't make the most of his opportunities.

Mushfiqur Rahim (wk)
At least two other players could have featured at No. 4 - Aminul Islam, who started really well in that position, making that century against India in our first Test, and a fighting half-century against Zimbabwe on our first tour. I also considered Mohammad Ashraful for this position, but Mushfiqur certainly has proved he has the ability to score big runs in all conditions. The first impression I got of him when I saw him in 2005 was that he had solid technique. Despite being slight of build, he could strike his slog sweeps very well. When he emerged at that young age, he solved our perennial problem of having a genuine batsman in the lower-middle order. 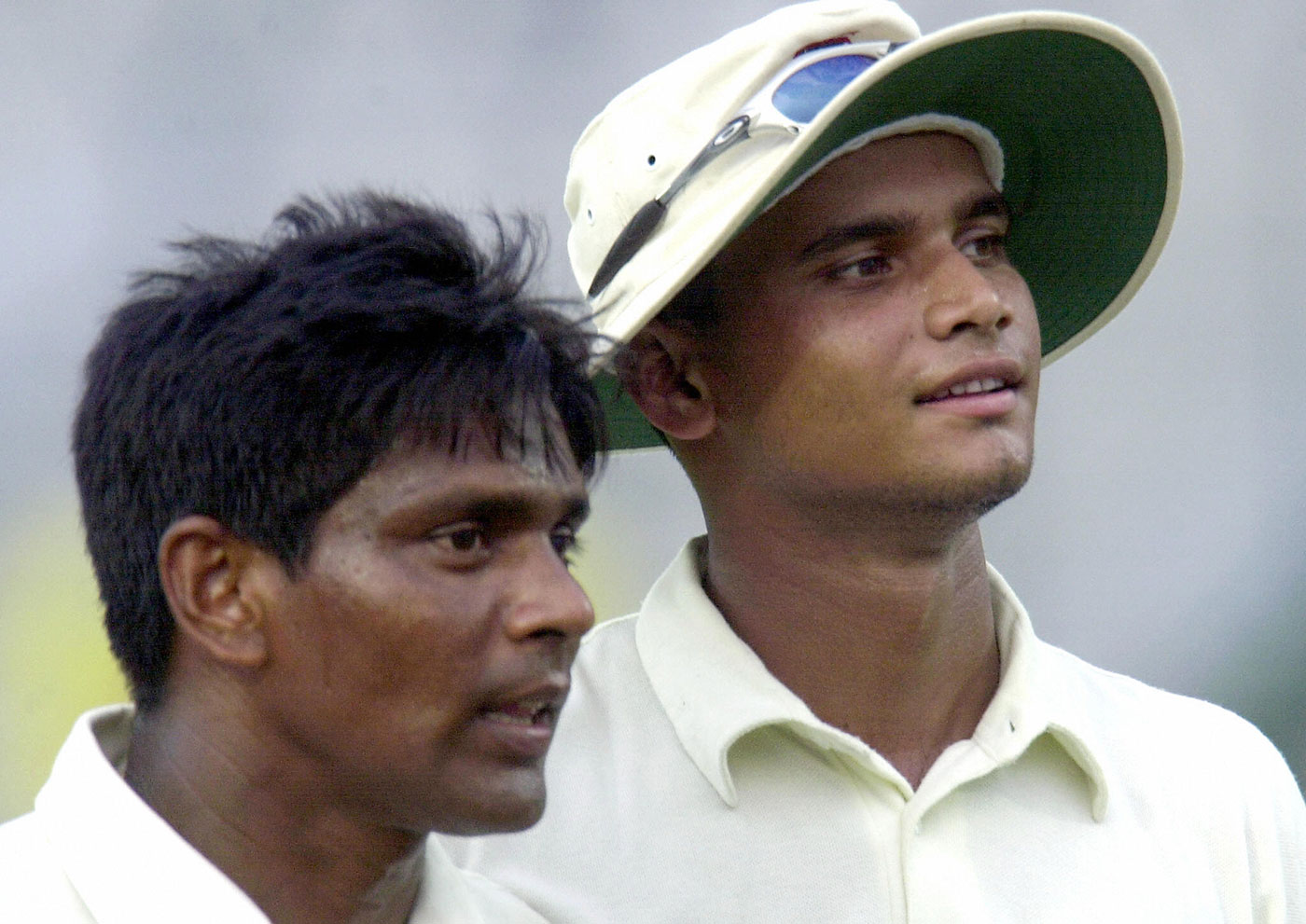 Shakib Al Hasan
I knew Shakib as a batsman before he became a bowler. He was a part-time bowler then. I miss that Shakib. I know he bats well now, but he was a No. 4 when he started off. If he hadn't concentrated on his bowling, he would have had many more Test centuries. He was a genuine class batsman. He still is, but the bowling certainly affected his batting.

By the time he made his Test debut, several months after his ODI debut, we knew Shakib would go the distance in his career. I hadn't seen much of him as a domestic cricketer, but when he made an unbeaten 57 against England in Barbados at the 2007 World Cup, I realised he was better than any of the other young players around.

Aminul Islam (capt)
Bulbul bhai, as we called him, and Akram bhai were our iconic cricketers, but they didn't play a lot of Test cricket. If they had been around for a little longer, it would have helped Bangladesh cricket. We were a very inexperienced side in our inaugural Test, but Bulbul bhai's batting managed to show us in good light. More than his 145 against India, I would rate higher his fifty in Zimbabwe on our first Test tour, the difference being the Zimbabwean bowling attack in those foreign conditions.

Aftab Ahmed
Another wasted talent who should have had a longer career. When we played, he was one of the few players the opposition would mention. He made 82 against a fearsome England bowling attack in Durham in 2005. He had the ability to bat at No. 6 or 7 in a Test and was good against both pace and spin.

Mohammad Rafique
He could bowl tirelessly for hours. Rafique didn't have a lot of turn or variations, but he did have a dangerous arm ball and could provide a lot of revolutions on the ball. He was a really good bowler. His five-wicket haul in Multan was my favourite. He saved me a number of times. When I needed wickets, let's try Rafique. If I needed to contain the runs, let's try Rafique. We always needed a bowler to plug the run flow in Tests because we used to concede at four or five an over at times. He also picked up the odd wicket while doing that, so he was an ideal bowler for any captain. He was also a good batsman and has a Test century.

Mashrafe Mortaza
He could never fulfill his potential as a Test bowler because he was injured a lot during his peak. Mashrafe couldn't bowl quick for a long time in his career, but I saw him bowl one of the fastest spells in Tests, against England in Chittagong in 2003. I was in the slips and I could see Nasser Hussain struggling against his pace. He is a genuine fast bowler and wicket-taker - what a captain wants. Injuries forced him to reduce his pace and only maintain line and length, but he retained the ability to take wickets. He understood batsmen's weaknesses really well. An intelligent bowler. We used to call him pagla [crazy], but now we know how intelligent he is, after he became a member of Parliament.

Tapash Baisya
A fighting cricketer and another wicket-taker. He was certainly very underrated. But Baisya was a good bowler. If he had been born in this generation, he would have got a lot of wickets. I saw his potential in some practice matches, but it was only after he made his Test debut, in Sri Lanka, that I realised he had something different to most other pace bowlers. Baisya developed himself to bowl better with the old ball. I could call him into the attack any time in the innings, knowing that not only would he give it his all but that he could also do things with the ball. He had a good slower ball and bowled with a beautiful action. Unfortunately for Baisya, we often played on flat pitches at home, and in our early days, every opposition batting line-up had legendary batsmen.

Shahadat Hossain
At his peak, he was a better Test bowler than even Mashrafe. He had aggression, pace and bounce. I always felt we needed a bowler like Shahadat in Test cricket. During a series in Sri Lanka, Mahela Jayawardene and Kumar Sangakkara complained to the umpires about his grunting. We knew those were tactics to distract Shahadat. He had a great strike rate under my captaincy, for which I can take credit. Rafique was my prize bowler, but Shahadat was a strike bowler. He had the right materials and was mostly injury-free, but unfortunately, he couldn't manage himself to have a longer Test career. No official BCB word yet on reduction of his ban, but he played a Dhaka Premier Division match on Saturday The story of how one genre of bowling came to dominate Bangladesh cricket, and of the men who made it happen 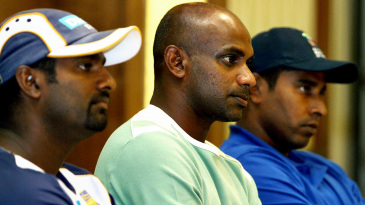