December 30, 2012, India v Pakistan, first ODI, Chennai. I had just flunked my Chemical Process Calculations exam for the fourth time at college, and was at the receiving end of a boring lecture from my parents, but the prospect of watching MS Dhoni and Suresh Raina against Pakistan at Chepauk excited me. I dug deep into my pocket-money savings, stood in a queue for three hours, and managed to get a Rs 500 (about US$7) lower-stands ticket. Cobbling together that amount was a big deal for me back then. I hoped Dhoni and Raina would reward me with something special.

Junaid Khan, however, ripped through India's top order. At 29 for 5 in the tenth over, on a 40-degree day in Chennai, India were feeling the heat. Dhoni can do no wrong at Chepauk: he's the thala. He got together with Raina, who is fondly known as chinna thala (junior leader) in Chennai. Despite Raina's brilliance for Chennai Super Kings, I still don't buy into that moniker because for me there is - and there will always be - only one thala and that's Dhoni. Tamil actor Ajith Kumar is also referred to as thala by his legion of fans, but sorry guys.

Nevertheless, I used to have this thing for Raina. He had that drop-dead gorgeous inside-out cover drive, which he made look ridiculously easy. He was the Energizer bunny who would run all the way from the outfield to bum-pat and high-five the bowler after a wicket. He was a gun fielder. He had played charming cameos in India's World Cup triumph in 2011. But back then, as now, there were questions over his temperament and technique against swing and the bouncer.

For a brief period in that Chennai ODI, Raina did stand up to swing and the short ball. Khan greeted him with a chest-high short delivery; Raina read the length early, got inside the line and coolly helped it to fine leg. Mohammad Irfan and Umar Gul, too, tested him with the short ball; he shelved the airy pull and hook and competently glanced the ball behind square. He played close to his body and wore down the fast men.

Then he was bowled, for 43 off 88 balls, attempting a hare-brained hoick against the innocuous offspin of Mohammad Hafeez. Just when I was telling my friends that Raina has developed a decent defensive technique, he threw it all away, including my thing for him. In a way, that hoick was symbolic of my relationship with Raina: it's complicated. As you hoick it: Raina throws away his wicket, and the hopes of a hundred fans, at the Chepauk © BCCI

Nasir Jamshed anchored Pakistan's chase with a fine hundred, but during its course I found myself warming up to Raina once again. Stationed at mid-off or short cover, he often ran in at full-tilt in the oppressive conditions. He took debutant Bhuvneshwar Kumar's cap and handed it to the umpire.

As I dragged myself out of Chepauk that evening I couldn't help but wonder what might have been had Raina displayed greater patience with the bat and hung on with Dhoni. He left me with the frustrating impression that he hadn't fine-tuned his technique and temperament to match his talent.

The following year, in the Bengaluru Test against New Zealand, in a chase of 261, Raina played nine successive dots against Jeetan Patel. He then stepped out and was bowled for a duck. I knew it was coming. That wasn't as painful to watch as his pairs at The Oval the previous year and the SCG in 2015. The short ball had messed with Raina's mind so much that he became vulnerable to the other lengths as well. Boom. His Test career was gone.

He enjoyed greater success in the Super Kings' yellow and is the second-highest scorer in IPL history - behind only Virat Kohli. His 25-ball 87 against Kings XI Punjab in 2014 is arguably the innings of the IPL - all editions. He batted like a dream that day, middling everything, including short ones from Mitchell Johnson.

Johnson had just bounced out Faf du Plessis and I expected him to take Raina out in similar fashion. Instead, Raina rocked back to within inches of his stumps and blasted a lifter over square leg for six. I didn't see that coming at all. I was just as gobsmacked as Johnson was. But I never saw the world-beating Raina after that, and couldn't quite settle for the ordinary Raina again.

His short-ball troubles resurfaced and injuries saw him lose his spot in both the ODI and T20I squads. His form for Chennai tailed off - in 2015, for the first time in an IPL season, Raina did not top 400 runs. I concurred with the popular opinion that he had somehow clung on to his spot by being "Dhoni's man". India's middle-order candidates in recent times never got the long rope that an out-of-form Raina did. 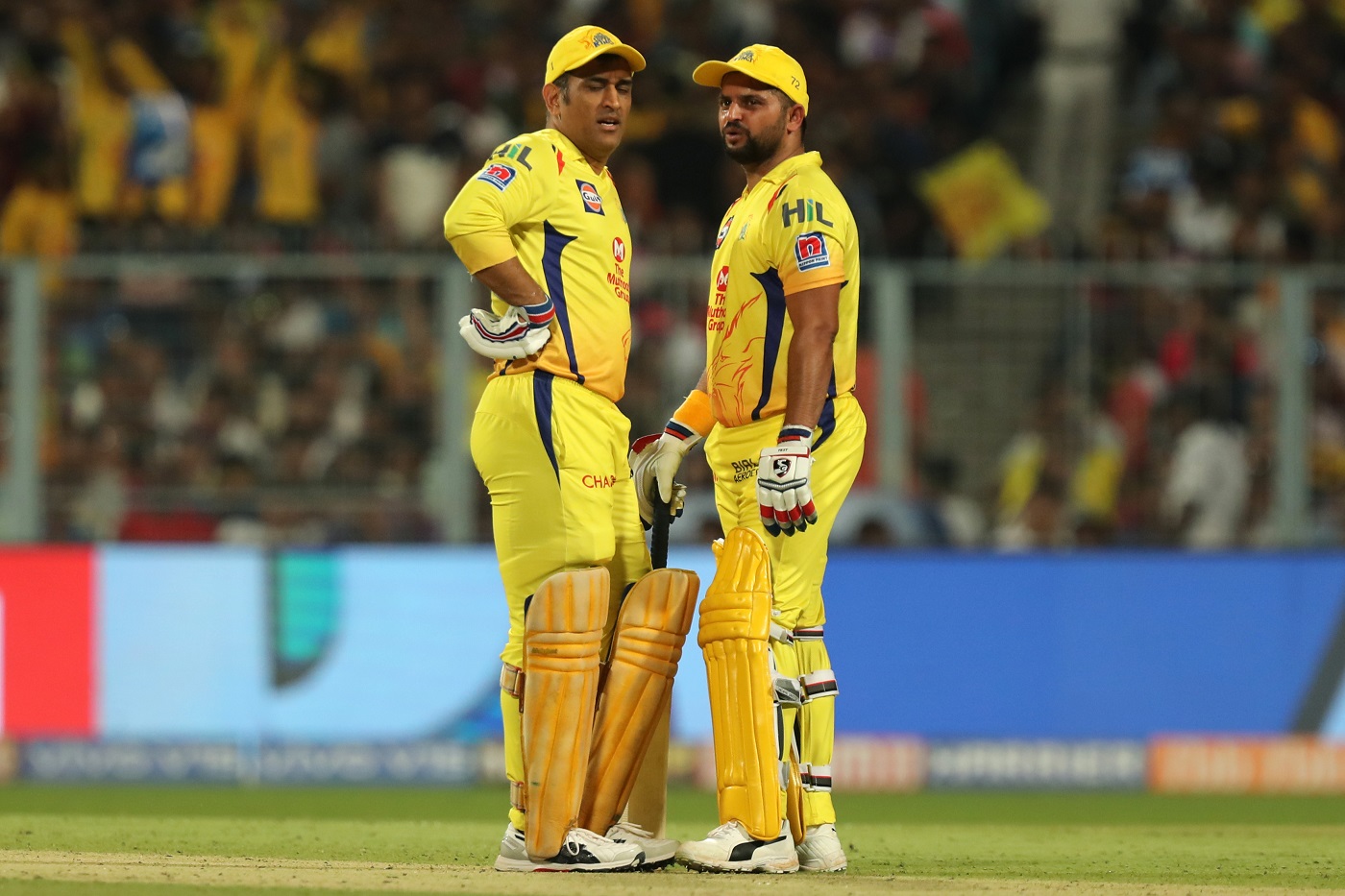 Fade in yellow: Raina still has the most runs in the IPL after Virat Kohli, but his best days in the tournament are behind him © BCCI

After CSK were suspended from the IPL, Raina moved to Gujarat Lions as their captain. It was a chance for him to carve an identity of his own. He began promisingly, marshalling his team to a first-place finish in the league stages in 2016, but that was undone by a second-from-last finish the next season.

He endured more injuries after that, and began picking and choosing his domestic games, before ditching them altogether. He hasn't played any domestic first-class or List A cricket since 2018. After recovering from knee surgery in mid-2019, I felt he set the wrong precedent by skipping the entire domestic season but turning up at the CSK nets in December to train for this year's IPL.

In the nets at the CSK camp at Chepauk in March, the crowd gave him the kind of reception that's usually reserved for Dhoni. Okay, I might have been grudging of that - all cheering of that kind should just be reserved for Dhoni. Even so, I egged Raina on when he dashed out of the crease and smoked Piyush Chawla over extra cover. In an alternative universe, Raina is probably meting out similar treatment to Rashid Khan as befits the white-ball phenom I had expected him to become. In this universe, however, he mostly makes me tear my hair out.

In the 2019 IPL final, he played an arguably match-losing innings: 8 off 14 balls. Jasprit Bumrah and Mitchell McClenaghan softened him up with short balls before rookie legspinner Rahul Chahar made the incision with a full-length skidder. Raina's powers have also waned in the field. At various points during the 2019 tournament, Dhoni had to hide him at short third-man or short fine-leg. He who prowled the off-side ring back in the day dropped a sitter at extra cover to reprieve Hardik Pandya on 4 in the final.

Pandya capitalised on the chance, launching a brace of boundaries to haul Mumbai to 149, which proved just enough in the end. Chennai are big on loyalty, but I thought Raina was a bit lucky to get away with a performance like that. Sure, T20 cricket is a cruel sport, but you can't gulp down seven dots in a 14-ball innings when the title is on the line. The innings was not dissimilar from Yuvraj Singh's 21-ball 11 in the 2014 T20 World Cup final. In the semi-final of that tournament, Raina edged three shots for boundaries and came away with what was called a great cameo.

He is fading away now. He has run out of everything: form, fitness, luck, and even my love. So long, Suresh. It was good complicated while it lasted. From throwing a surprise in the batting order to smashing sixes after sixes, CSK have done it all 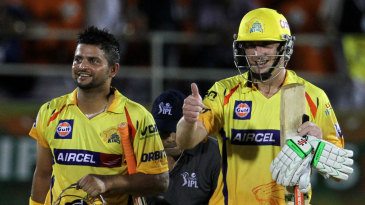