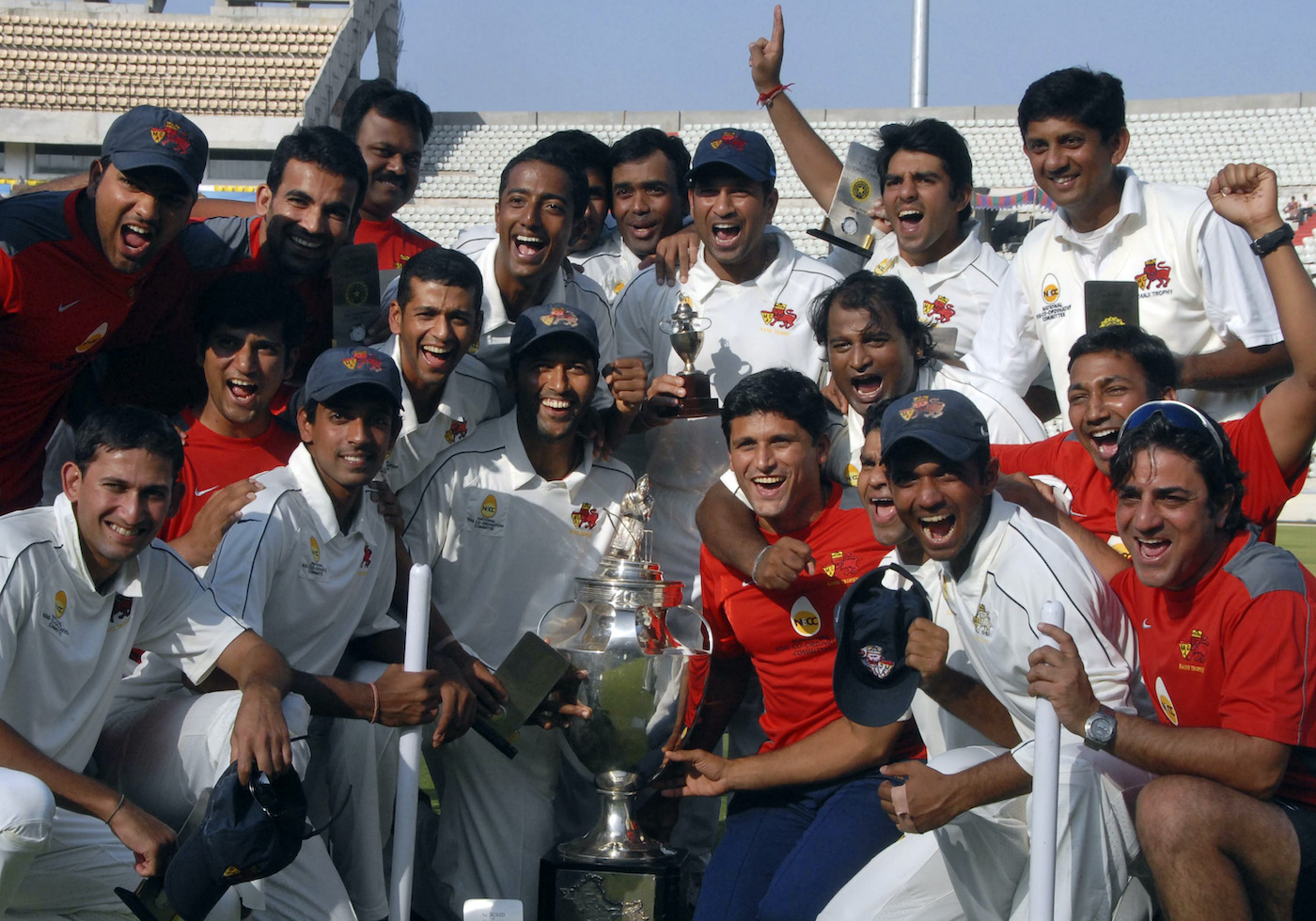 Earlier this year, Wasim Jaffer, the former Mumbai captain, called curtains on a first-class career that spanned 24 years, with the most Ranji Trophy appearances, most runs in the tournament's history, most centuries and most catches. He won ten titles in all - eight with Mumbai and two with Vidarbha. Here, he picks his all-time Mumbai XI from those he played with, and four "legends" for the sheer weight of their performances.

Sunil Gavaskar (c)
To score the number of runs he did, mostly without a helmet, against the top attacks in the 1970s and 1980s, makes him an automatic pick. The way he picked up lengths and his ability to leave balls alone made him an idol for those of my generation. He was such an inspirational figure that it's hard to look beyond him as captain in this XI. I watched him bat live only in a number of festival matches, but I've been fortunate to get to know him well over the years. The story of him turning up for a Kanga League game straight from a New Zealand tour is legendary. Our seniors also told us how he returned from an international series and saw our Ranji side off at Mumbai Central while they were leaving for the final, against Maharashtra. That's commitment.

Rohit Sharma
I won't be picking myself, obviously, since it's my XI. I'm going with Rohit as my opener even if it may seem left-field. He's been opening in white-ball cricket for eight years now, and the improvements I've seen both technically and temperamentally convince me that he'll be successful as a red-ball opener too. I remember, in his debut season in 2006-07, Mumbai needed to win the last three league matches outright to qualify for the knockouts. Rohit hadn't done as well as he would have liked early on in that season, but he got a double-century in that must-win game, against Gujarat. We won that, and then beat Rajasthan and Maharashtra. We not only qualified for the knockouts but also won that season. That knock was full of character. Over the years, he may not have played too much for Mumbai because of India commitments, but he is passionate about the team.

Dilip Vengsarkar
He had an aura around him as a player. He had this amazing run-scoring ability; it would seem as if he was making hundreds for fun. His level of commitment never dropped, even when he was playing corporate cricket. New players feared sitting close to him because of his personality. He had that typical khadoos [ornery] Mumbai attitude. He also had a knack for spotting talent and backing them, the prime examples being Rohit Sharma and Virat Kohli, during his time as national selector. I remember the 1990-91 Ranji final against Haryana, where Mumbai lost by two runs. He was 139 not out in a heroic chase, and when the last man was run out, he couldn't stop crying. It told you how much playing for Mumbai meant to him. 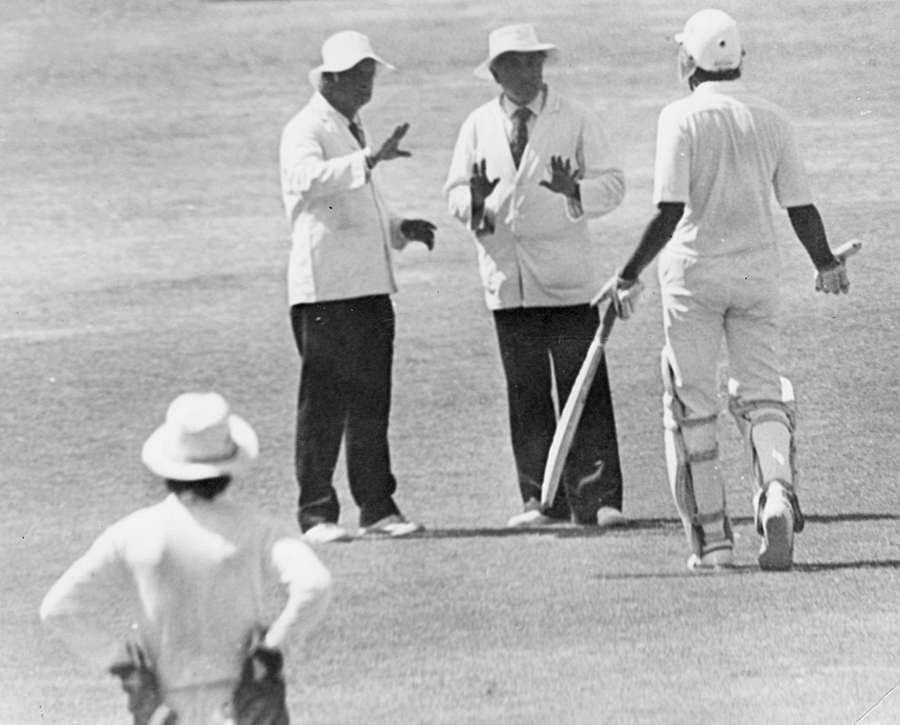 Rebel in a losing cause: Vengsarkar argues with the umpires in the 1990-91 Ranji Trophy final that he couldn't save despite a Herculean 139 © MiD DAY Infomedia Ltd

Sachin Tendulkar
This needs no explanation, does it? Technically and temperamentally, we didn't need to look beyond our own dressing room for inspiration. Right from our youth, we heard stories of how a schoolboy prodigy was making heads turn in Mumbai. Such was his run-scoring ability that even a rare duck used to make the headlines in the papers. That told you what a big name he was even as a teenager. Whenever I saw him play for Mumbai - maybe 10 or 11 times - he showed the same kind of commitment he did while playing for India. He would never spend time off the field after batting, he always encouraged the team. His habit of scoring big hundreds was fabulous. He never got out cheaply.

Vinod Kambli
Just watching him construct an innings used to elicit joy. He had a dominating presence at the crease, and the manner in which he would not let spinners settle down was a lesson for many of us. His footwork against spin stood out. He was light on his feet, had fine balance and had a grit about his game. Off the field, he always kept things light. He definitely underachieved in his career. For the kind of player he was, he should have played a lot more for both Mumbai and India. Injuries also didn't help his cause, but the value he brought to the Mumbai dressing room was immense.

Chandrakant Pandit (wk)
For the sheer batting depth Mumbai possessed in my days, I'm going with a regular wicketkeeper at No. 6 - someone I played with and played under, both at Mumbai and Vidarbha. No situation was too much pressure for Chandu sir. He was full of fight and embodied street-smartness. You shouldn't judge some players just by their numbers or average. He was one of them. Whenever we were in trouble, as long as he was around, there was a sense of comfort. He's someone I developed a strong connect with much later in my career. At Vidarbha, he was this general of sorts, an inspiring coach. He had this reputation of being a taskmaster, but I was the only one who could freely speak to him without worrying about how he would respond. Our bond strengthened there. Just the value he brought to the team with his inputs from behind the stumps was invaluable. He had a presence about him behind the wicket.

The best Ranji XI that played against Mumbai

Sairaj Bahutule/Ramesh Powar
Two options here, because unlike in other countries, conditions even within India are so different across regions. If there is bounce, I would pick Sairaj. If the opposition had a number of left-handers, or if the surface was dry, I could turn to Ramesh. Both were pugnacious characters, who had that never-say-die attitude. For Sairaj to recover from a life-threatening car accident that put him in a coma and required him to have steel rods inserted in his leg was remarkable. From there on, to have the career he did with Mumbai, it puts into perspective how hard he had to work. The thing with both of them is, apart from the nearly 1000 wickets they picked between them, they were equally competitive with the bat.

In fact, Ramesh started off as a bits-and-pieces cricketer. Before his debut for Mumbai, he was picked for a Mumbai Colts team in the Police Shield, but couldn't break into the XI. So from the second match onwards, he went and played as a guest player for Mumbai Police team. The format was league-cum-knockout, so when the Colts clashed against Mumbai Police, Ramesh picked up a five-for and proved a point. He would be Man of the Series in that tournament and that set the stage for his Mumbai debut. He was a true fighter. Both of them had intense competition, because Mumbai had a great spin factory around the time. There was Nilesh Kulkarni, Rajesh Powar and a few others. So to beat competition and carve out careers together and the numbers they finished with - 630 first-class wickets for Bahutule and 470 for Powar - is remarkable. A pugnacious spinner, a bowling captain and an engineering mind for Mumbai in Ramesh Powar, Ajit Agarkar and Zaheer Khan © Getty Images

Ajit Agarkar
He was a great competitor, so he picks himself. Whether he was playing for Mumbai or India, he would always show the same kind of commitment. His intensity wouldn't drop at all at any stage. Ajit had that belief that it needed that one good ball to get someone out, and invariably he would bowl it when we needed it. The fact that he went on to have such a long career shows how he thrived in tough situations. He was also a very good captain later when he got the opportunity. He would back his players, make them feel wanted and never let them feel any pressure.

Zaheer Khan
Thinking bowler, master tactician. He was shrewd, understood his game and limitations as an 18-year-old in his very first season with the red ball. In my first Under-19 season, Zak was also picked straight from tennis-ball cricket, but was in the reserves. He went to MRF Pace Foundation later that year, and shifted to Baroda because he wasn't sure of being picked for Mumbai. After he played for India, when the chance presented itself, he came back and Mumbai cricket can be thankful for that. After his MRF stint, he became fitter and stronger. My initial impression was, while he could bowl long and be accurate, he lacked pace. He was wiry and would often fear breaking down. But the bowler who came back was different. We have shared rooms on many tours, and his stomach for a fight was always admirable. When he was dropped from the Indian team in 2005-06, I saw from close quarters the efforts he took to improve his game by going to Worcestershire, and we all know what he did next year on the England tour in 2007. Not just for the Indian team, even in Mumbai, he was a bowling captain, always. He had a mind made for engineering, so he always understood angles well. His field placements reflected that. Among the most skilful left-arm pacers I played with.

Abdul Ismail
One of the best bowlers in the 1970s. To pick up 274 wickets at an average of 18 is truly remarkable. To do it against the quality of batsmanship that there was in those days is what makes him an automatic pick. He was always dedicated, rose through the ranks from a very humble background, and played the game with a smile. My other contender was Abey Kuruvilla, who was also very underrated but was a genuine match-winner. He had strength, could bowl quick and nip the ball around on docile wickets. I believe he should have played for India in 1992-93. He debuted a few years late. He was different to some of the other guys in the dressing room. He was quiet, focused in his own way, lived in a small bubble. He wouldn't talk much, but his eyes were full of determination.

Padmakar Shivalkar
He is a legend who picks himself. A left-arm spinner who could bamboozle you in the air. Anyone growing up in Mumbai in my time would always speak highly of how he would hoodwink batsmen. and teams would often spend a lot of time in trying to come up with plans for him. He would never tire, and was at the batsmen all day. And he did that till he was nearly 50 years old. Unbelievable! He was very unlucky to not have got the India cap, but he continued doing what he loved with a smile for Mumbai. 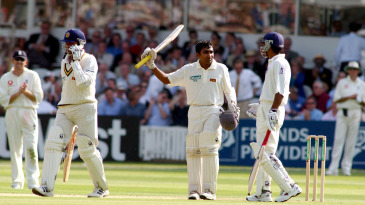 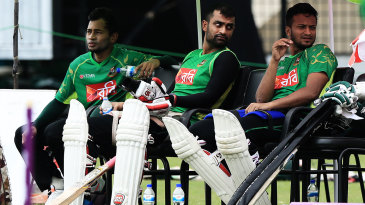