The balls of the century, No. 19: Jason Krejza to VVS Laxman

Stuart MacGill once said of Indian batsmen that the challenge was not so much that they could pick what he was bowling, more that "they don't care". No one personified such preternatural assurance against spin bowling than VVS Laxman, who flicked the best legbreaks of MacGill, Shane Warne and many others through midwicket more times than anyone would care to count.

There was one day and one ball, though, where Laxman was utterly defeated by spin so sharp that not even his expert grasp of where a ball might pitch, and what it would do once it got there, was any use. It was delivered in Nagpur in 2008 by Jason Krejza, the most spectacular of his 12 wickets on an unforgettable debut for Australia. Unquestionably, Krejza's star was of the shooting kind: at a time when the selectors were cycling through spin bowlers like Dean Jones' batting gloves at Madras in 1986, he got just one more Test match.

By the time he bowled to Laxman, Krejza had already claimed 8 for 215 in the first innings. "At the start of the Test I started getting taken apart a little bit because the Indians went quite hard at me. I didn't start doubting myself but those thoughts almost start creeping into your mind," he recalls. "But when Shane Watson got Murali Vijay, I remember hearing Michael Clarke and Ricky Ponting talking and Punter was going, 'What do I do?' and Clarkey just said, 'Mate, you've got to back your spinner, just bowl him.' When I heard that I was pretty sure I'm going to get a decent crack here to find my feet and keep bowling."

His first spell of the second cost 73 runs in 12 overs, but when he returned shortly before tea on day four, he found help from the footmarks with an older ball. Sachin Tendulkar and the wicketkeeper Brad Haddin were surprised by a delivery that ripped and jumped across the batsman to go for byes, and it gave Krejza some idea of what he had to work with.

"By that stage there was a little bit of rough, and I was thinking, 'Right, I've got some assistance now, I can start trying to throw it out into the rough and let it spin.' We set the fields for that, with quite a straight cover."

At the start of the next over, Krejza sized up Laxman from the top of his mark. Spinning hard, he drifted and dropped an offbreak at 83kph on a line that stretched Laxman's bat just far enough away from his front pad to leave a gap. The venomous turn that followed was of the kind more commonly associated with wristspinners. There was the merest hint of an inside edge and the ball plucked out leg stump.

"I call it a fluke because I think it was a fluke, like Warney's ball of the century was a fluke," Krejza says. "In my whole career you could probably count them on two hands, those deliveries where everything just comes out perfectly."

Laxman's legs and hands remained in his forward-defensive crouch for a moment, but his head snapped back to observe the damage Krejza's breakback had wrought. The Australians were exultant; for the first time all series they had a bowler capable of getting past the bat.

For the tabloid Herald Sun, Jon Pierik reckoned it "may well be the ball of the year", and compared Laxman's reaction to another famous double take: "In as much disbelief as Mike Gatting was when Shane Warne famously announced himself in Ashes battle in 1993."

As for Krejza, there was a sense of perfection being touched, however briefly. "It's really that 'pinch yourself' moment when I talk back over it with people. These guys were my heroes, watching them destroy spinners and destroy quicks all over the world, then all of a sudden I was there bowling against them and getting them out. It was a hard thing to feel like you belonged, because these were the people you watched on TV. It was a great experience, incredible."

The only thing more incredible was that his Test career would be over before the year was out. Battling a gusty wind in Perth, not to mention Jacques Kallis and AB de Villiers, he was as powerless as the rest of the Australian attack to stop a South African fourth-innings chase that signalled the end of Australia's cricket empire. But of the bowlers chosen for the WACA Ground, only Krejza was dropped, via a brief, brusque phone call from Andrew Hilditch as he awaited a flight home.

With each passing year and replay of Laxman's demise, it looks to have been a decidedly unkind judgement on a bowler of rare gifts. 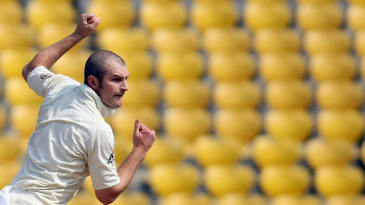