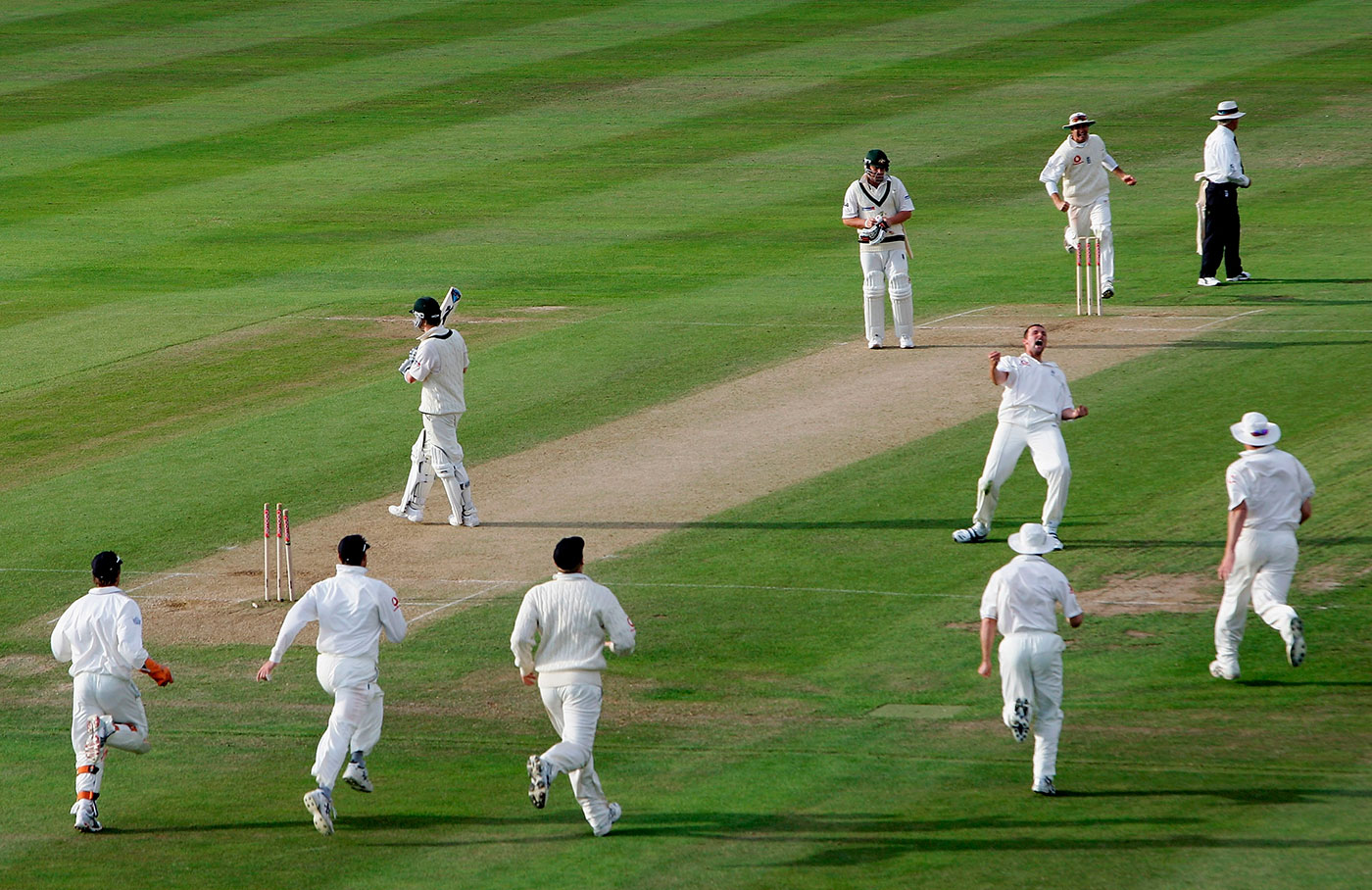 At the fall of Michael Clarke's wicket, Australia needed another 107 to win with two wickets in hand - which they so nearly got

The balls of the century, No. 18: Steve Harmison to Michael Clarke

Not everything hyped from the outset stands up to sustained scrutiny - as the examples of Be Here Now, Avatar and Haseeb Hameed attest. That said, the 2005 Ashes is still regularly held up as one of the greatest Test series of all time, while Steve Harmison's slower-ball yorker to dismiss Michael Clarke at the end of a breathless third day - instantly catapulted into the pantheon by Mark Nicholas on Channel 4's commentary - retains enough critical acclaim to have made it on to this list.

It's worth reliving the moment, just as Nicholas called it (go on, you can do the voice in your head):

"Oh, Steven Harmison! With a slower ball, one of the great balls! Given the moment, given the batsman, and given the match, that is a staggering gamble that's paid off for Harmison…"

Those lines of commentary, the plangent crash of ball on stump, Harmison's pleasure/pain roar of relief: all contribute to an unforgettable moment of sporting theatre, one that contrasts with but also accentuates the almost anti-climactic finish a day later, when Geraint Jones stooped to grab Harmison's leg-side half-tracker and rescue England from the jaws of crushing defeat.

We had a few of requests for this one! https://t.co/Dk9TJgD3AT pic.twitter.com/QxuKSJtfDE

But let's go back to the delivery itself. Harmison often laughingly refers to having the "worst slower ball in the history of the game", at least as it was viewed by his team-mates, Andrew Flintoff and Marcus Trescothick, from their positions in the slips. "As I was about to bowl it, they just slumped their shoulders, [as if to say] 'Ah no, he's gonna go again.'"

But on this occasion, in the crucible of an Ashes contest, it came out pretty much perfectly: a split-fingered legcutter, delivered with a high arm from above two metres. It seemed to hover and then dip as the batsman opened up to flick across the line, instead playing over the top of the ball as it bit into the turf, then spun away to strike off stump.

As Harmison said recently on a Sky Sports watch-along: "It worked that day and Michael Clarke didn't pick it." Freddie and Tresco were probably doing their mate a disservice, though the backstory adds weight to Nicholas' "staggering gamble" line, melodramatic as it seemed at the time. The deception was two-fold, Clarke's dismissal a euphoric punctuation mark that wasn't quite the full stop it appeared. But 15 years on, it remains a slower ball to get the pulse racing.